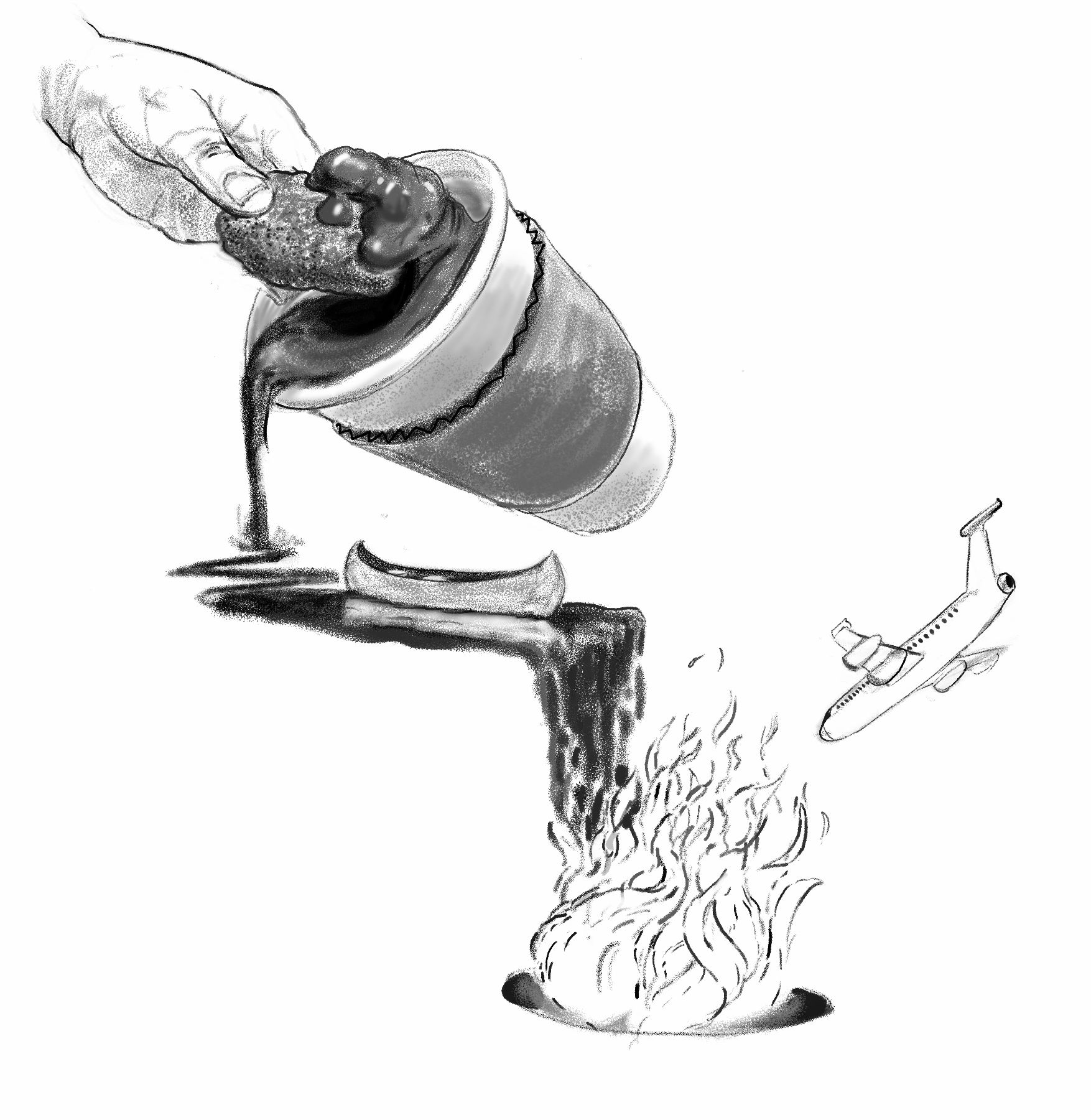 Last Boarding Call to Hell
The airline industry seems sinister in its everyday workings, occupying our heavenly realm with 6000 fuel-burning, rapid-traveling metal canisters at any given time. Ordinary people are growing increasingly suspicious of who and what is behind those trails in the sky. Onboard a United Airlines flight in April, one unlucky passenger was stung by a scorpion that inexplicably landed on his head mid-flight.

However, the devil is in the details. For satanists looking for a flight across the Baltic this month, Flight 666 to HEL (Helsinki’s airport code) was just sinister enough: the 13 year-old plane departed from Copenhagen at the 13th hour on Friday, October 13.

Once the flying purgatory took off, however, passengers report that things appeared to be business as  usual. Apparently the crew did nothing to demarcate the event. Pilot Juha-Pekka Keidasto told the press, “I’m not a superstitious man. It’s only a coincidence for me.”

Meanwhile, industry authorities and air travel enthusiasts alike took to Twitter to make the most of the cosmic alignment of codes. Mike Robertsson, a Swedish man and an employee of flight tracking site FlightRadar24, bought seat 13F on the flight just to miss it, tweeting “Oh, no! I won’t make it in time for flight 666 to HEL.”

Despite these reports, nobody really knows what happened on that plane—Ouija boards and other ghoul-summoning devices are not banned on TSA’s carry-on restrictions list. Some passengers may have been enthused to take the flight because a deal is a deal, and demand tends to drop on Friday the 13th, given that paraskavedekatriaphobia (fear of Friday the 13th) still has its hold on the general population, for the superstitious and self-professed non-superstitious alike. Equally formidable is hexakosioihexekontahexaphobia (fear of the numbers 666).

The publicity stunt was not lost on the Helsinki airport either. Instead of pushing the Biblical angle as one would expect, given that 666 denotes the “Mark of the Beast” in the Book of Revelations, airport authorities gave a nod to their Scandinavian black-metal heritage, sending passengers a bus emblazoned with “Hard rockin’ Hel” in a gothic font on its side.

Finnair brags that despite superstition, the daily flight has landed safely on Friday the 13th twenty-one times over the past eleven years (as if a smooth take-off and landing are the only metrics in which the demonic could possibly manifest). Still, this was its last Friday the 13th voyage. The airline has discontinued the flight, claiming on Twitter that the cut is due to the carrier’s growth and resulting need to reorganize flight numbers.

The airline was quick to reassure concerned passengers over Twitter that the flight from SIN to HEL is still available.

Buffalo Spice Latte
Canadian road trips reveal the critical importance, or perhaps even the necessity, the coffee-donut chain Tim Horton’s. Splattered across rest stops between the wide empty roads of northern North America, the chain provides tired and hungry drivers and residents with a quick coffee, egg sandwich, and perhaps a 25-piece-box of Timbits for the open road. Now that Tim Horton’s sugary serum has seeped down into the US, it must compete with larger brands such as Dunkin’ Donuts and Starbucks. However, Tim Horton’s donuts remain a staple item; a deep-fried delight from our neighbors to the North.

While Horton’s stale, sometimes two-day old donuts are a big draw, the company must expand its range of products to compete with these larger companies. Instead of creating your typical pumpkin-spice latte, Tim Hortons has gone rogue. The enterprise recently introduced a Buffalo Latte in two stores in Buffalo, NY. This drink is composed of the usual espresso and steamed milk combo plus mocha and buffalo sauce flavoring. An unbelievable flavor-blast to early morning coffee drinkers, buffalo sauce flavoring is questionable at best. Is it an attempt to coin the new pumpkin spice latte? The drink was released with other fall espresso flavors.

Maybe it is an appeal to those who strive to mask the taste of the coffee bean. The Independent is unsure, and so is Regional President Stephen Goldstein, who slipped and admitted that he, too, was not an original advocate of the concept, calling the beverage an “unexpectedly delicious sweet and spicy treat.”
Besides providing an alternative to the fall favorites we easily tire of, Tim Horton’s claims the product celebrates the introduction of lattes to their stores and the shared birthdate of the original Buffalo sauce and Tim Horton’s incorporation. The Indy thinks this is a weak justification for such a concoction.

Take it hot or cold, but be warned; if you drink it icy, you will miss out on whipped cream and Buffalo seasoned sprinkles. The public’s response has been just as tangy as the latte. Melissa Ryle tweeted, “US Tim Hortons buffalo latte can only be explained as Trump’s strategy to convince us NAFTA is evil.”

Ditch the Canoe, Try the Hogwarts Express
It turns out that the Hogwarts Express is still chugging along through the Scottish Highlands. The red Jacobite steam engine—which many kids dreamed would roll by their middle school, promising something a bit more magical than algebra—recently made a rescue mission.

Jon Cluett recently took his wife and four children on a vacation near Loch Eilt, featured as the spooky site of Dumbledore’s grave in Harry Potter and the Deathly Hallows. The family parked a few miles from their cabin, and traveled the rest of the way by canoe. They awoke one morning, midway through their stay, to discover that the boat was missing. Faced with the prospect of an unpleasant trip by foot across miles of boggy swampland, Cluett gave the local police a call.

The police delivered the magical news; the next train passing through the area was none other than the Hogwarts Express. Having wrapped up its illustrious movie career, the red and gold steamer now runs the lonely route through the Highlands, and was able to stop for the Cluetts.

Cluett, who works as a pastor in the central Scottish city of Stirling, shared in an interview with the Associated Press that his kids, all Harry Potter fans, freaked out upon the train’s arrival. “They know that [the Harry Potter movies]... are filmed in the Highlands,” he said. “But they hadn’t put all of that together in their heads until they saw the train.”

The Hogwarts Express was originally conceived of by the Minister of Magic, Ottaline Gambol, as a solution to all the chaos that ensued when thousands of budding wizards descended by various means upon Hogwarts. According to JK Rowling, the Express required “one hundred and sixty-seven Memory Charms and the largest ever mass Concealment Charm performed in Britain.” The result: the well-known steamer, throngs of new wizards whizzing safety through England, and a bunch of Muggles left scratching their heads over where they had misplaced their train.

Today, here in our Muggle world, the train runs an 84 mile route, boarding in Fort William and Mallaig, and then chugging by Loch Morar, Loch Nevis, and Glen Coe (featured in several Harry Potter movies as the set of Hagrid’s home). It serves largely tourist purposes, with tickets sold at £29.00—a small price to pay for a die-hard wizarding fan.

The recent Cluett family rescue is just one more thing the Hogwarts Express can add to its accolades. But the Indy suspects that Dumbledore would turn in his grave if he knew his school’s beloved train now spends its days rescuing Muggles foolish enough to lose their canoes.