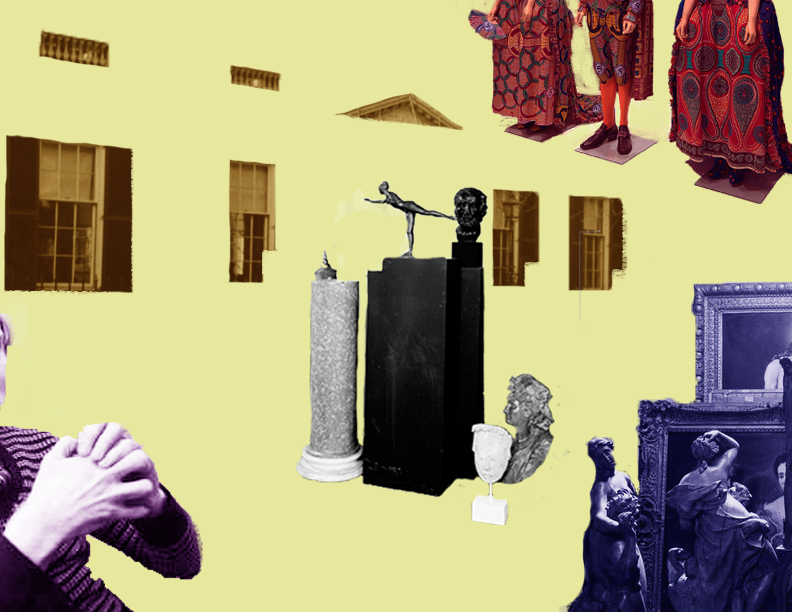 In contemporary depictions of museum, galleries are often conceived of as very sterile spaces. Manicured white walls like those at New York’s Museum of Modern Art (MoMA) come to mind. There is this sense of exclusivity. “Do Not Touch,” read the signs on the wall. The viewer gets the sense that high art is worthy of admiration, but only from behind the line on the floor. This archetypal image of the museum stems from the tradition of the ‘White Box,’ the popular style of displaying art in the 20th century. In creating these very impersonal, sparse interiors, museums focused the viewer’s attention on the works of art themselves.

In the late 19th century, museums maintained an even stuffier model. During this time, the Académie des Beaux Arts worked with an established set of standards for which pieces would gain entrance into the acclaimed Paris Salon. Back then, the standards of high art were clear—only pieces that reflected their conservative tastes would have been displayed in the museum. When the Académie rejected the more radical works of artists like Manet and the early impressionists, those artists created an experimental salon—the Salon des Refusés.

Suddenly, the works rejected by the establishment had risen to the forefront of conversation in the art world. Viewers had a place to access landscapes that emphasized feeling over technical ability, or portraits that featured women in repose—content that hardly seems surprising today, but at the time transformed how people thought about art. From that point forward, the distinction between high art and low art, or good versus bad, has become more complicated. Without the same guidelines for technique and content, the museum still makes judgments about what a  sensible collection of works looks like. A curator’s decisions about what to make visible to the general public greatly impacts society’s perception of ‘good art.’

The RISD Museum dismantled its 19th century salon-style main gallery only a year ago, but they preserve a hierarchal structure in the tradition of the White Box. In the changing curatorial practices at the RISD Museum, viewers encounter the museum’s struggle to balance consistency and its desire to keep pace with the fluctuating contemporary art world. Once in a while, museums like RISD’s take steps to intentionally critique conventional curating. The RISD Museum aims to do exactly that in an exhibition planned for the Fall of 2019. Raid the Icebox  aims to take a novel approach to curating, but it is also within a tradition of experimentation—which began with a visit Andy Warhol made to Providence almost 50 years ago.

In 1969, RISD Museum Director Daniel Robbins took collectors Jean and Dominique de Menil for a tour of the RISD Museum’s storage. Walking through the series of disorganized rooms, Robbins expressed frustration with an extensive collection that remained hidden from visitors. The de Menils offered a suggestion: send an artist to do some digging. For the project, the de Menils recommended their friend, artist and socialite Andy Warhol.

The results, known as Raid the Icebox, proved a blaring revolutionary display that reworked popular conceptions of the museum. The show, which ran between the fall of 1969 and spring of 1970, travelled from Rice University’s Institute for the Arts to the Isaac Delgado Museum in New Orleans before returning to the RISD Museum, the home of its featured works. Raid the Icebox has become known as the first exhibition curated by an artist, forming a foundation for similar projects today, Dominic Molon, Curator of Contemporary Art at the RISD Museum, told the Independent.

Andy Warhol, widely known for his prints of soup cans and celebrities, did not fail to maintain his eccentric personality in his curatorial efforts. He found a painting by the acclaimed French painter Cézanne and announced he would prefer a fake. He proclaimed he detested “old art.” He chose to display works exactly as they had been stored, granted equal status to shelving and Seurat as art objects. Not only had Warhol chosen art that did not exactly belong in the Paris Salon, but he had organized it with the childish genius he became known for in the advent of pop art. There had been no historical precedent underlying Warhol’s qualifications for works to display. Many of the pieces he chose had been in storage for a reason, said Molon. “You had… great paintings by Cézanne next to… things that were being kept out of public view because they weren’t maybe critically very good or interesting,” he added. Andy Warhol liked the shoes on the RISD Museum’s storage shelves. He liked the sideways paintings and the harpsichords. And in the sculpture garden, he stated simply, “I want that tree.” Warhol did not have to comply with the image promoted by the larger museum. Raid the Icebox did not attempt any chronological display, any predetermined concept of canon, nor does it hesitate to echo the haphazardness of the storage rooms where Warhol found the pieces. There’s a fascination with lines and rows of anything that Warhol liked, without any academic reasoning.

At the time Raid the Icebox went up, the RISD Museum itself had become a point of controversy amongst students. The museum seemed to enforce the elitist tendencies of the art world by largely ignoring social issues. When they commissioned Andy Warhol to reimagine the display of the collection, they, in fact, perpetuated the very elitism that students took issue with. Although Robbins’ decision to host this artist-curated exhibit had been groundbreaking within the context of museology, the student reception reflected that their choice of art only reinforced the school’s failure to make space for people of color and different socioeconomic classes. As the exhibition roughly coincided with the shooting of unarmed Vietnam protesters at Kent State, “students and the world’s attention were elsewhere—not on a famous contemporary artist working in this collection,” said Sarah Ganz Blythe, Deputy Director of Exhibitions, Education, and Programs at the RISD Museum, in an interview with the Indy.

Despite initial reactions, the show has since become known as a significant moment in the history of art. “Ever since then it’s been… a touchpoint for this idea of what does it mean when an institution allows an artist to curate from their collection” said Blythe. Since Raid the Icebox first presented the concept of an artist acting as a curator in 1970, artist-curated exhibits have become commonplace in museums. The practice has been repeated by artists like Glenn Ligon, who curated the exhibition Blue Black at the Contemporary Art Museum in St. Louis last month. “An artist curated exhibition can be freer,” said Blythe. “It’s allowed to…challenge conventions and normal practices and do the unexpected.”

Now, nearing the 50th anniversary of Raid the Icebox, the RISD Museum plans to rework the idea in a contemporary context. A team at the museum has invited 10 artists, including alumni, to come into museum storage and create a second iteration of the project in its original setting. The show will open in fall of 2019. The artists will rework the museum gallery by gallery through the spring of 2020.

The project will not only impact the organization of the museum but also give each artist an opportunity to engage with research that may impact their own work, Blythe said. In considering Raid the Icebox, she wonders “How can we constantly hold and cultivate and expand the number of voices within this place and the number of perspectives on the collection?”Artists invited to curate for the second Raid the Icebox include Adam Pendleton, Pablo Helguera, and Nicole Eisenman, a RISD grad. The artists involved in the second iteration of Raid the Icebox come from a variety of backgrounds and disciplines, exemplifying how the museum has changed in the past 50 years.

The publication printed for the original exhibition, which has become a popular item for sale on Ebay, will be reprinted for the 50th anniversary of the event. In addition, the museum will develop a new publication documenting the upcoming exhibit. Blythe hopes that when the galleries curated by the 10 artists close in 2020, the legacy of revitalizing the museum through new and relevant voices will remain. In the first Raid the Icebox, the project with Warhol took steps to drastically shift the framework of museum practice, giving the individual artist space to personalize these institutions. His work, however, only impacted the very insular and, at times, elitist field of museology. Hopefully RISD’s reimagining of Raid the Icebox will further the work that Warhol began and strive towards larger ideals of inclusivity and conscious curation.

MARLY TOLEDANO B’20 has an empty icebox.