Independence struggles in Kurdistan and Catalonia 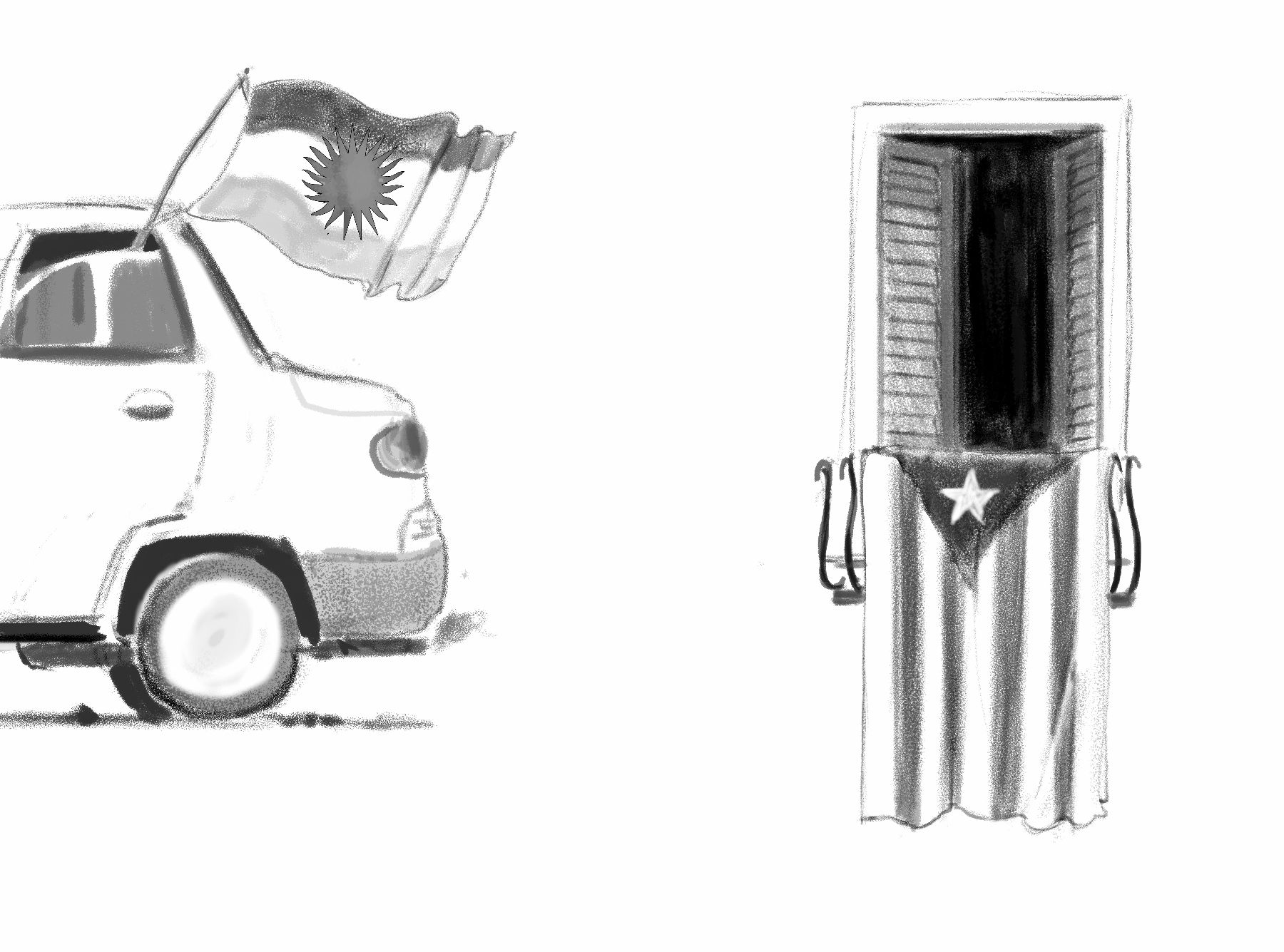 In the weeks leading up to the October 1 Catalonian vote on the region’s independence, tens of thousands of people flooded the streets of Barcelona protesting efforts by the Spanish government to suppress the referendum it had deemed illegal and unconstitutional. Clashes between protesters and the Spanish Civil Guards landed more than 850 injured people in the hospital. Meanwhile, in Iraq, the Kurds in the northwest region of the country were preparing for a September 25 referendum of their own on independence. Despite pressure from the Iraqi central government and international powers to call off the referendum, it proceeded without interference. Separated by a week, both the Kurdish referendum and the Catalonian referendum, which took place one week later, yielded a 90 percent vote in favor of independence, exacerbating hostilities with their respective parent countries and casting the future of each region into political uncertainty.

Catalonia and Kurdistan have incited local anxiety and global controversy. Although their desires and grievances run parallel—alongside their lack of federal and international acceptance—the geopolitical and historical differences between these ethnic groups may chart divergent courses going forward.

Catalonia and Iraqi Kurdistan, each of which possesses its own flag, parliament, and representative offices in countries abroad, have strong economies relative to the larger countries of which they are a part. Due to especially strong manufacturing and tourism sectors, Catalonia has become one of Spain’s wealthiest regions. It pays more to the Spanish government in taxes than it receives in federal funding. Economic frustrations have given rise to the secessionist cry “Madrid nos roba,” a call of protest against a system through which Catalonia  subsidizes the less wealthy parts of Spain. Countries depend upon a system of wealth distribution throughout various regions within their borders, under the banner of a shared national identity, in order to promote economic cooperation and collective prosperity. Catalonian economic arguments in favor of independence, whereby more prosperous regions may secede in order to protect their own financial integrity, threaten the foundations of national economic cohesion around the world.

While the rest of Iraq has struggled to recover from the 2003 US invasion, Kurdistan has experienced relative political stability and consistent economic growth, particularly since it took control of Kirkuk. Just outside of the city lies five oil reserve fields containing 40 percent of Iraq’s oil and six percent of the world’s total. Since 2014, the Kurdistan Regional Government has controlled three of the five oil fields and has been selling oil independently on the global market since 2015 in order to fund its state budget. Exxon Mobil and other multinational corporations are particularly invested in this region. Catalonian and Kurdish secession would result in the loss of the most economically productive region for Spain and Iraq respectively.

Catalonia was granted semi-autonomous status by the 1978 Spanish constitution signed into law after the death of the fascist dictator Francisco Franco. During his time in power, Franco attempted to quell desires for Catalonian independence by suppressing its culture and outlawing the Catalonian language. On the other hand, histories of oppression have influenced the current situation in Kurdistan to a much greater degree. Under Saddam Hussein, the Kurds survived forcible displacement during the Arabization campaigns of the 1970s and an attempted genocide in 1988 in which 100,000 Kurds were killed. They secured constitutional recognition of an autonomous Kurdish region in northern Iraq by 2005. Current estimates place the total Kurdish population of Iran, Iraq, Syria, and Turkey anywhere between 25 and 35 million, making the Kurds the largest geographically concentrated ethnic group in the world without a nation-state. Historical oppression functions in vastly different ways in Catalonia and Kurdistan, but in both cases, past historical traumas of ethnic and linguistic marginalization informs the current fight for autonomy, a fact that many international organizations, such as the EU and UN, ignore in their quest for the geopolitical status quo.

While international powers, including the United States and the European Union, have spoken out against Catalonian secession, the conflict has been deemed a domestic issue; foreign countries and other international institutions are thus reluctant to intervene. The issue has been complicated by Madrid’s militant response to the protests and referendum, which included firing of rubber bullets into groups of protesters, seizing of ballot boxes, and beating voters. The EU, concerned about its own destabilization in the wake of Brexit, never explicitly condemned the government’s police crackdown.

On the other hand, international powers have been much more vocal and involved in trying to dissuade the Kurds from pursuing independence. Surrounding countries—including Iran, Turkey, and Syria—each have sizable Kurdish minorities and fear that secessionist efforts in Iraq would embolden the Kurds in their own countries to accelerate their own movements for autonomy. Turkey and Iran, which have a Kurdish minority of 20 percent and 10 percent respectively, have each conducted joint military exercises with Iraq along the Kurdistan border.

Turkey, which has been working to quell a 33-year insurgency by the separatist Kurdistan Workers’ Party, has been vocal about expressing discontent with the Kurds in Iraq and their efforts toward independence. Turkish Prime Minister Tayyip Erdogan has threatened to cut off the flow of the pipeline which runs from Kirkuk to the Turkish city of Ceyhan should Iraqi Kurdistan continue to push for independence. The US, fearing that the secession of the most prosperous and stable region of Iraq would fragment the country and undo years of US investment in ‘nation-building,’ has staunchly opposed Kurdish secessionist efforts. Secretary of State Rex Tillerson condemned the September 25 referendum, announcing in a statement that “the vote and the results lack legitimacy and we continue to support a united, federal, democratic, and prosperous Iraq.” A statement released by the White House warned that the referendum could distract from the war with ISIS by potentially embroiling Iraq in another military conflict. Rather than seeing the fight against ISIS as an inopportune moment for independence, the Kurds see their critical role in the US coalition as potential leverage for Western reception of their demands for their own nation-state.

In both situations, bottom-up nationalism from politically, economically, and culturally autonomous regions have been repressed in the interest of the state and foreign interests. However, while Catalonia has been viewed largely as a domestic Spanish issue, Kurdish independence has assumed an international significance. Beyond the legacy of the 2003 Iraq War, Kurdish independence operates within the historical context of genocide, imperialism, and the racism undergirding US military interventionism which has opposed self-determination in the Middle East. In a sense, an independent Kurdish state is a much stronger socio-political statement, considering legacies of Western supremacy, than Catalonian independence. Catalonian separatists are facing police violence and immense suppression from the Crown, but histories of foreign intervention and racial hierarchies influence the struggle in Kurdistan to a larger degree, making it an object of foreign interests and reducing the agency of local activists continuing the fight for autonomy.

In the wake of the referenda, both Spain and Iraq have made efforts to take back control of the semi-autonomous regions that voted for independence. The government in Madrid is currently preparing to take control of Catalonia by invoking Article 155 of the country’s 1978 constitution, which will bring the region back under direct rule of the Spanish government. Methods could involve drastic measures including the declaration of martial law, the suspension of the Catalonian police force, and the prosecution of Catalan secessionist leaders. Two leaders of the separatist movement, Jordi Sanchez and Jordi Cuixart, have been taken into custody by the Spanish national court while under investigation for sedition. Their detention has sparked a new wave of protests by Catalonians calling for their release.

Meanwhile, Iraqi soldiers and Kurdish Peshmerga forces entered into an armed standoff on October 14 over the oil rich province of Kirkuk, which, while not officially part of Iraqi Kurdistan, has been under Kurdish control since 2014 when Peshmerga forces reclaimed the territory from ISIS’s control. On October 16, Iraqi forces took back the region, leaving 30 dead and dozens wounded.

While Iraq and the KRG may have narrowly avoided a civil war, it seems as though Kurdish and Catalan dreams of independence will have to wait. While Catalan President Puigdemont was desperate to bring Madrid to the negotiating table, his requests were denied. The Spanish government gave him a mid-October ultimatum to abandon plans for independence. While the futures of these two regions remain uncertain, the shared struggles of Kurdistan and Catalonia reveal the problem of simultaneously striving toward and rebelling against the fixed borders of a modern nation-state.

Neidin Hernandez B’19 is invested in national self-determination.