Folkloric tales of the weeping woman and her wails 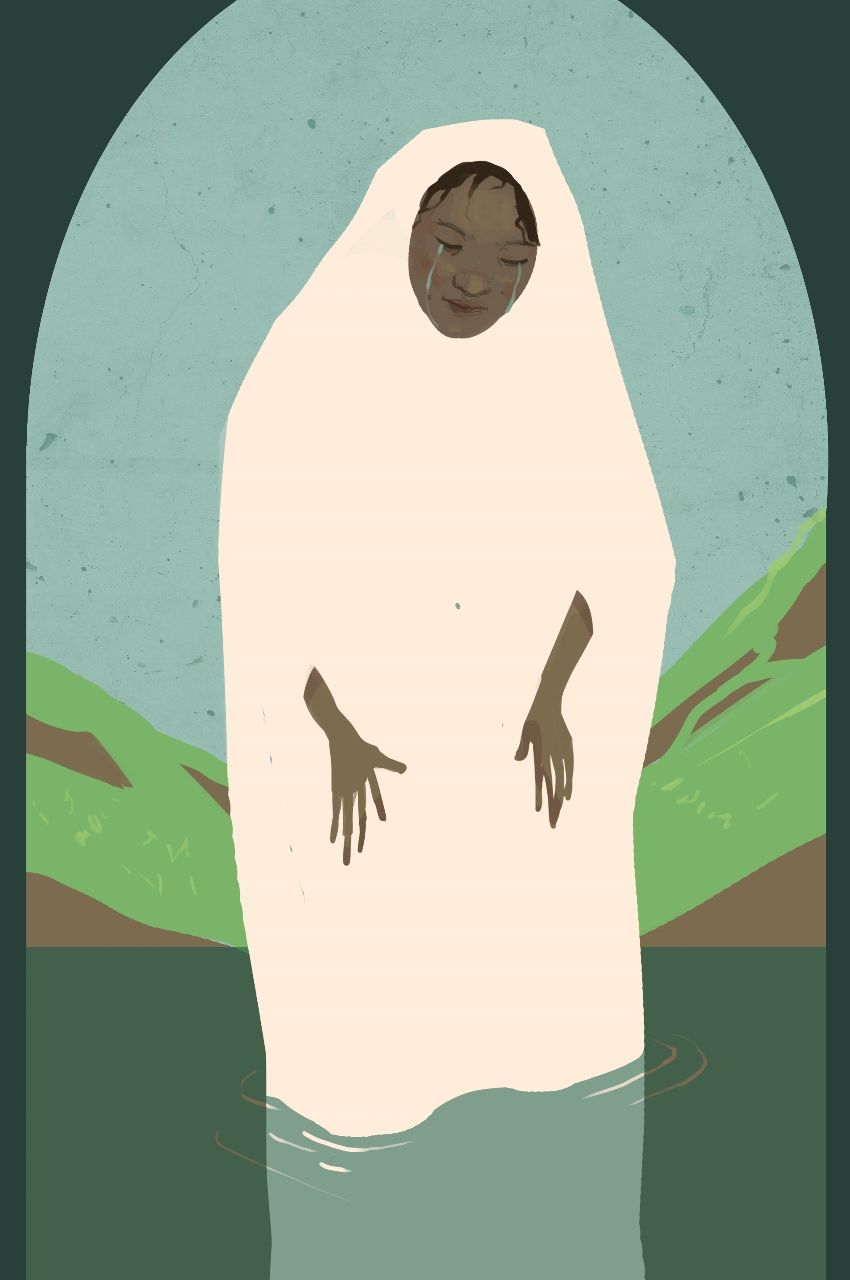 In the beginning, we sleep on the hot tongue inside some tropical animal. The sky blooms open like a giant cactus flower, pink and shameless. We live tucked inside a drum note, bare feet on black asphalt and the weatherman says the heatwave will last until Thursday. Fallen fruit pulses open on the sidewalk, tender flesh beating still. The days are metal screen doors, roots from the guava trees pushing up through red stone tiles, a wooden bus stop beyond the chain link fence that form the perimeters of our world. We pluck tiny peppers growing from the vines near the alleyway and pop them in our mouths like pomegranate seeds.

At night, we sit with our faces awash in the blue light of the television screen, closing our teeth around the red of mango skin and microwaved hot dog wieners. We share a bed like our mothers had, spend the twilight hours growing drunk on the small heat of each other’s breath exchanged through a series of stories about the things that scared us most.

We talk about our parents having sex, our cats getting cancer, but mostly we talk about her, la llorona, wandering through the streets of the city, her white dress illuminated by headlights and brake lights, wailing with the sirens walking past. We fear she that she will come looking for us, a trail of lost children in tow. We fear that she will call us by name, ready to lead us into another time. But most of all, we fear that we would follow.

Before she was a mother, she was a girl in love with a man to whom land and flesh were one and his. She knelt by his side with her hair across his feet, singing him sacred songs about hummingbird hearts and floodwaters that turned the world into silver. She cleaned the white of his teeth with her heavy tongue and hid the cosmic origins of his breath beneath her ribs. She disentangled her limbs from her body and offered them up to him as sacrament, offered the whole broad of her back and wide expanse of her stomach, a rolling landscape of olive brown. He pressed a hand between her breasts and felt the space between her hips swell like the lungs of a bird preparing for flight.

My mother has four siblings and of those four she is the only one who marries someone darker than she is: trigueno, moreno, prieto. My mother sighs, unaware at the time that he would one day make lloronas out of all of us. No sabes que hay que mejorar la raza, her father tells her. Marry light, better the race, breed el indio out of the bloodline, but I was born light and he did not hesitate to recognize me as one of his own.

La llorona wasn’t ashamed of her children until she looked up at him and saw that he was. “When the child was born,” writes the poet Alicia Gaspar de Alba, “he opened his eyes Aztec black/his skin shone café-con-leche…His father cursed the native seed in that/first mixed son.” What she saw was that she loved him and he hated her, hated what they had made together, a bastard son, a new race he could not claim for the shame of it. He turned away from her and it was like losing the sun. She ran cold with fear, fear that he would leave, fear that her children would grow up, fatherless and despised. She took them to the river by the quiet of moonlight and dipped their black heads beneath the surface of the pleading waters, the whole world a crown. Their bodies went limp beneath her hands. She fell to her knees and cried until she couldn’t tell water from oxygen.

I want to tell her that I too know what it’s like to keep loving someone through the violence, to have a heart-held thing ripped away and still want to give with both palms open and full of everything good inside you and the wailing can’t be heard for the wind in your mouth. I felt the shame turn to love and the love into shame and then abstract into something else altogether.

La llorona, mother of los mestizos, was the first one to love us, the first one also to teach us hate for our brown skin, our round noses, our coarse black hair. She was the first one who taught us to want to kill that part in us, trigueno, moreno, prieto, our own mother and who were we to doubt her?

Rejected by her people, by the lover she tried so hard to please, by death herself, she inhabits the liminal space between here and there, the living and the dead, the us and the other. She taught us how to exist in the spaces in between, make a home for ourselves in the forgotten margins of other people’s stories. She is someone who feels too much and all too deeply, someone open and aching for acceptance but met with nothing but rejection, somehow too much and never enough. She is the unforgiven, daughter of Eve, daughter of earth, solid, here and unholy. She becomes the voice of every long-suffering woman marked as irredeemable for their sins: the sin of loving too much or loving all wrong or loving someone before loving oneself, all inexcusable.

La llorona was the sixth omen, predating her own story, wandering the streets of the capital bemoaning the coming death of her children and the conquest that was to come. She cried out in Nahuatl, “O my children, where am I to take you. O my children, we are about to go forever.” But she did not go, she faded into the background of the lives of her mestizo children, emerging in our times of sorrow, that ever-present howl coming through the wind above blue-black streams now polluted with Pampers and old Coke cans, now hiding in the shrieks of telephone wires running over alleyways and empty parking lots.

Her tale has crossed borders, taken on new lives and deaths, morphed into exactly what it needed to be with each retelling. An oral tradition passed down through generations, la llorona has found her way into poems, songs, short stories, and novels. Writers and artists have attempted to fill in the gaps in her story, answer the how and the why, cull truth from her past suffering that resonates with the present. “The official version was a lie,” writes Cherrie Moraga. “I knew that from the same bone that first held the memory of the cuento.” What is it about a woman’s sin that requires eternal penance? Moraga argues that the story of la llorona has been inscribed into patriarchal narratives about woman’s inherent and irredeemable sinfulness, providing an analogous figure to the Eve and the Judeo-Christian story of her original sin in the Garden of Eden. So was la llorona blamed for the downfall of her people, the beginning of total conquest by the Spanish.

Writers like Alicia Gaspar de Alba have revisited the tale and turned it on its head, complicating the traditional narrative of love, betrayal, and madness, imagining alternatives where her actions were signs of agency rather than victimhood. “The woman shrieking along the littered bank of the/Rio Grande is not sorry. She is looking for revenge,” writes Gaspar de Alba in “Malinchista, a Myth Revisited.” “Centuries she has been blamed for the murder of her/child, the loss of her people, as if Tenochtitlan/would not have fallen without her sin.” New interpretations of the tale seek to vindicate la llorona, to show how heavy it must be to carry the weight of the sins of her mestiza progeny, how tiring it must be to mourn without ceasing so as to ensure her continued presence in our collective consciousness. She will not be forgotten. Moraga reframes her action as the sole possible expression of agency in a captive relationship with a white conqueror who would bring about the destruction of her people.

La llorona has been adopted as the mother of the borderlands, that space between the U.S. and Mexico marked by cultural hybridity and complex national identities, the subaltern site of exclusion from the nation-state inhabited by los mestizos. She is the voice of those who will not be forgotten. Pat Mora writes:

Maybe La Llorona is el Rio Grande
who carries voices wherever she flows,
the voices of women who speak only Spanish
who hold their breath, fluttering
like a new bird.

She is a figure of hope for these women holding their breath, preparing to cross the border into a new country. She is everyone who came before them, both those who made it and those who did not, their voices immortalized in her cries. “To me, la llorona is the border,” writes Gapsar de Alba. She is not the symbol of crossing but the crossing itself, the act of inhabiting multiple planes of existence at once, physical, spiritual, and psychic. In Helena Maria Viramonetes’s short story “The Cariboo Cafe,” a washerwoman living in the borderlands sends her son out to the store at night only to find out later that he died at the hands of la migra. While crying out into the night in search of her dead child, her voice becomes one with that of la llorona, with the voices of the women who have suffered incalculable loss along the US-Mexico border.

La llorona cries for us, her drowned children, lost again with each new generation, drifting downriver, farther from the home of her body. From her we learn about mourning, about how to suffer without letting go, how to hold true to our pasts, the sins and the triumph of our foremothers reverberating still through our lives like a drum note. We dance on the asphalt in summer, rest tangled up in hammocks and each others’ limbs. The first time we look in the mirror and squish our noses into fine points or try to scrub the brown from our skin like dirt she is there, weeping for us and everything we’ve lost. She will cry with us when our love is not enough and when the self-hate threatens to overwhelm. She is there—won’t we learn from her mistakes—but she will never judge, knowing what it is like to be known only for one’s sins. When we mourn, she mourns with us. She is the voice of our past, teaching us how to remember. Her cry, a comfort in the hot of night, a lament, a scream, a freedom song.

NEIDIN HERNANDEZ B’19 hears the cries of la llorona.