The politics of soft steel 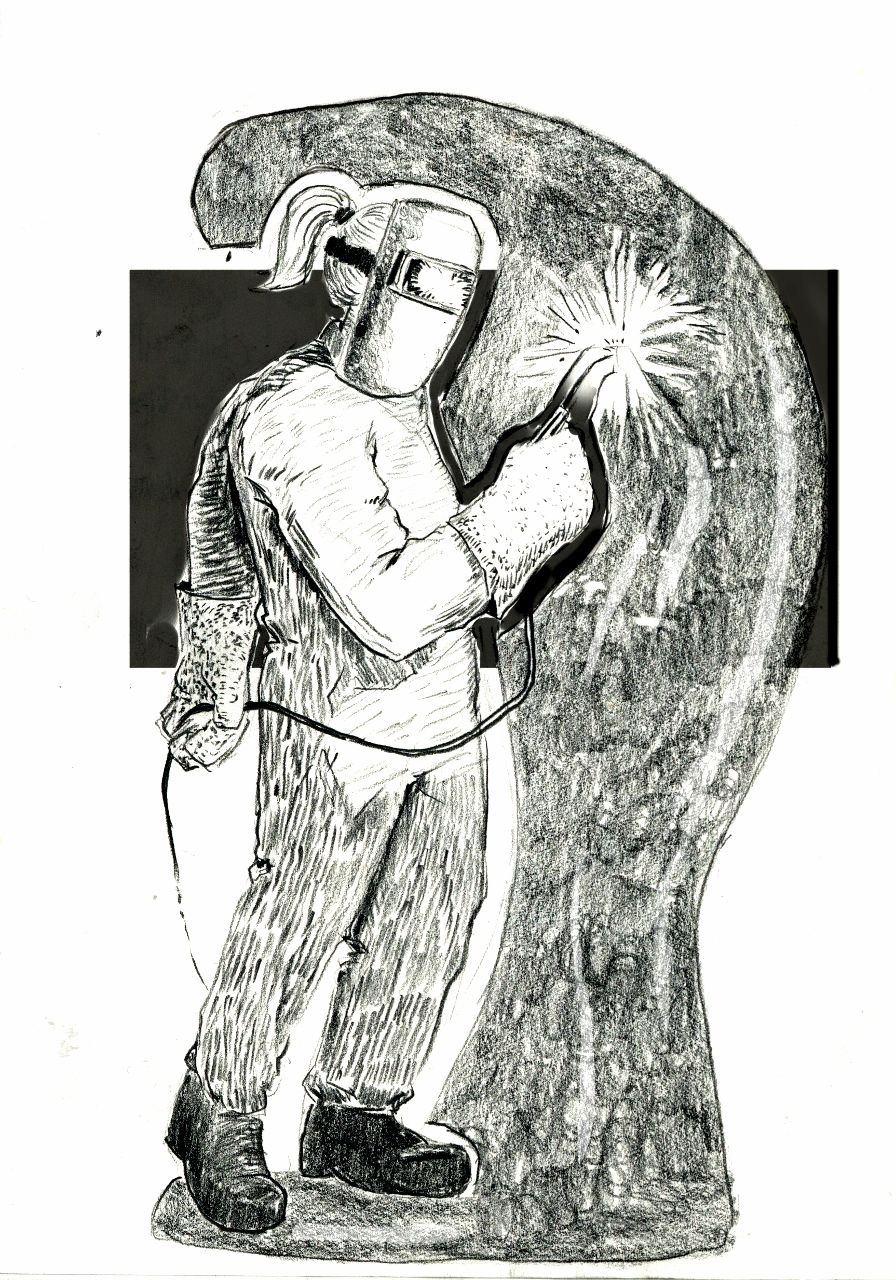 Steel is about leaning on an edge. Whether bending, shaping, cutting, or welding, I must always wait for the metal to fall, to melt at the perfect moment. Steelwork is a conversation of equal parts patience and reaction—in a split second the metal gets red-hot, and then glows wetly orange. Steel becomes hard and brittle if cooled immediately; it is softer and more pliable when the heat is eased down. Steelwork is often associated with the material’s hardness and strength, but its response to heat, the way it can be coaxed into melting, flattening, or flowering out depends on both the softness of the metal and the hand working it. Sometimes I have to ease off the heat for just one moment and then flash it back on to get it to bend exactly the way I want it to. Learning to speak with steel in this specifically persuasive, almost flirtatious way tests the rules of the built environment. When steel feels familiar, the ceiling’s I-beams, a slick doorknob and the links of a fence all seem like common vocabulary. Metal is a language you can write poetry with.

For many people, fluency in steel is limited to a few basic images of big machines, workers coated in oily dust, or the girl from Flashdance in a welding helmet. The outside world is built from steel, but it also has a direct relation to the gooey world of bodies. Steel is made by controlling the amount of carbon in molten iron to a specific level that makes the metal harder and more versatile than pure iron. These elements that construct our rigid world are also critical to biological life. Carbon is a basic building unit in all organic molecules, and can compose both one of the hardest materials, diamond, and one quite soft, graphite. Iron is a vehicle for oxygen transport through plant and animal circulatory systems. Its tendency to oxidize in the presence of water should be no surprise given its affinity for oxygen in the body.

Reimagining steel’s materiality as a counterpart to our own bodies yields a more nuanced understanding of our built environment and its impact on larger ecosystems. The archaeological record reveals that human-manipulated metals are just one part part of a cycle of extraction of the Earth’s raw materials and eventual deposition back into the earth as waste. Buildings and highways are not permanent terrains, but fallible material systems, subject to change and deterioration. Steel is fleshy. If buildings are colossal bodies, steel frames are the bones that need support and care and sometimes replacement. The ease with which steel changes physical states is what makes it so readily recyclable (it is the most recycled material in the world), but this same chemical fluidity makes it susceptible to rust if built or left in wet conditions.

Water, especially salt water, is a catalyst for the oxidation of iron into rust because it forms acids that expose more and more of the metal to oxygen. This process begins on the surface of the material, but given enough time and exposure, the entire mass will disintegrate into an unstable composition, powdery and no longer strong. Whenever steel objects are neglected, they rust.

‘The Rust Belt’ is the name ascribed to the upper Midwest since its economic downturn due to industrial automation and outsourcing in the 1960s. While the metaphor of ‘rust’ is very evocative, it is possible to reimagine the metaphor in a more hopeful and complex way that accounts for the ways that rust can be combated. The metal underneath rusted areas can be salvaged with water-displacing chemicals, or something as simple as a wire brush. In a miraculous collaboration with the human body, steel will never rust if it is touched often enough. The oils in our hands form a barrier against invading oxidation. The hydrophobic technology of all common sealants like paints and waxes was based on the work our hands do perfectly. The Rust Belt might look different if we also decided to rid it of rust, through the same care and attention that can salvage salt-sprayed bridges or thousands-year-old artifacts.

Change for workers in the Rust Belt and beyond would follow naturally from new methods of care for the material because care requires different kinds of labor than production does. Care for steel might mean designing objects that require frequent touch when used, as many tools, like scalpels and screwdrivers, already are. Constant touch could also become a larger strategy for investing in the maintenance of public infrastructure, a disparaged trade that requires contact and attention, rather than innovation. Changing labor practices might require changing laborers.

Although gender representation in a variety of formerly male-dominated professions in the U.S. has been creeping closer to being equally proportionate, women are most underrepresented in industries of building and materials, from wood to stone to metal. In industries related to steel, women account for under 5 percent each of welders, machinists, and structural steel workers, according to a 2014 survey by the Department of Labor. So although the conversation about steel need not begin or end the politics of gender, steelwork in the US has long rested on the fiction that men are best suited to build the material world. Given this disparity, our president’s constant appeals to disenfranchised steelworkers in campaign speeches and in his current discussion of trade are necessarily appeals to working-class men. The mythical American past where everything was ‘great’ is a past where women had an even smaller place in industry and the workforce in general. In addition to the inequity that supporting traditional steel manufacturing perpetuates, Trump’s promise relies on a misunderstanding of how industry in a global economy works today. Most steel industry in this country involves buying and manufacturing steel for production of finished products rather than smelting the metal. Furthermore, automation—not China’s low export prices, as Trump says—is to blame for much job loss. More than just bad policy, the propagation of traditional labor techniques relies on the false assumption that labor can only be done by a certain population, using the material in only one type of way. The promise to bring steel back to the Rust Belt is an attempt to solidify and reavow an outdated marriage of steel and masculinity.

‘Feminist steelwork’ therefore functions as a critique of and an alternative to the status quo of the steel industry and the political implications of its labor. Feminism is at its best when it rewrites exclusionary histories into inclusive futures, and the history of steel is long and rife with gender inequity. Breaking out of a binary approach that focuses simply on gender parity in industry, feminist steelwork can be about more than just who labors in strenuous, sometimes dangerous trades. Feminist steelwork is equally interested in the labor of making a stainless steel pan and of cooking with it; it is equally invested in steel as an industrial and an artistic material. Feminist steelwork is a discourse around steel written in poetic terms. This could take the form of a love letter: slow and small-scale, written in a sensual hand. Whether the metal curves and bubbles organically, or is sharp enough to cut flesh, feminist steelwork is about taking texture seriously, about touching and being intimate with the materiality of the world.

Materials are always meaningful and often political, and so their conceptual framing—mostly by the terms of a globalized economy, and here by feminism—is critical. In addition to and often in spite of its source and production, material takes on symbolic, cultural meaning. Diamond, to return to carbon, has become a symbol of committed love in this country; steel, the material of guns, knives and towering buildings, is both a symbol of and manifestation of power and violence. Like other objects, its materiality affects lives well beyond aesthetics. It follows that conceiving of steel and those who work it as softer, more fluid entities, is in turn a social, political project.

Understanding the symbolism of the material naturally leads back to the close entanglement of steel and our country’s patriarchal past and present. The built environment reflects who creates it, which is why it is critical to ask what the material world will look like if more kinds of bodies are involved in building it. Cars, buildings, utensils, medical devices, public sculpture, even nails and screws might look and act differently if built with a sensitivity for all the things steel can be: soft, rigid, flexible, brittle, massive, tiny, ephemeral, loose, thin, melty, sharp. Chairs might flex to fit more kinds of bodies; buildings could be more energy efficient; art could be seen as a public necessity rather than a frivolity of the elite. This is not a plea for a new kind of design, but a new kind of relationship—between human bodies, and with this incredible material.

For now, steel may still seem hard and not worth exploring. But to imagine that we understand everything about the material is a form of hubris at best. No matter how well engineered a steel structure is, it can still be crushed, bent, or toppled in the right circumstances. Natural disasters and murderous humans have toppled buildings, bridges, dams, cranes, even whole cities, with ease. One of the most chilling examples of steel’s fallibility is the artifact now in the National 9/11 Memorial and Museum of a bent steel beam, torn, and wrapped back upon itself like the loop of a ribbon or a quarter note on a musical staff.

In its gravity-defying ability to support huge weight on tiny footprints, steel encourages this illusion of invincibility: steel imparts a deluded sense of control over the completely uncontrollable. The material is seductive, coyly asking for gentle taps, unfurling, and folding rather than displays of strength. No matter what kind of body acts on this impulse to tend to, there is glowing potential in rejecting historic attitudes toward steel and instead opening up to the full range of words and gestures that steel can make. I myself am still just starting to learn its language. Going on three years of working with steel has made my muscles sore and my hands dun with carbon dust. But when firescale coats my fingertips, everything I touch turns to steel, as if it were no less valuable than gold.