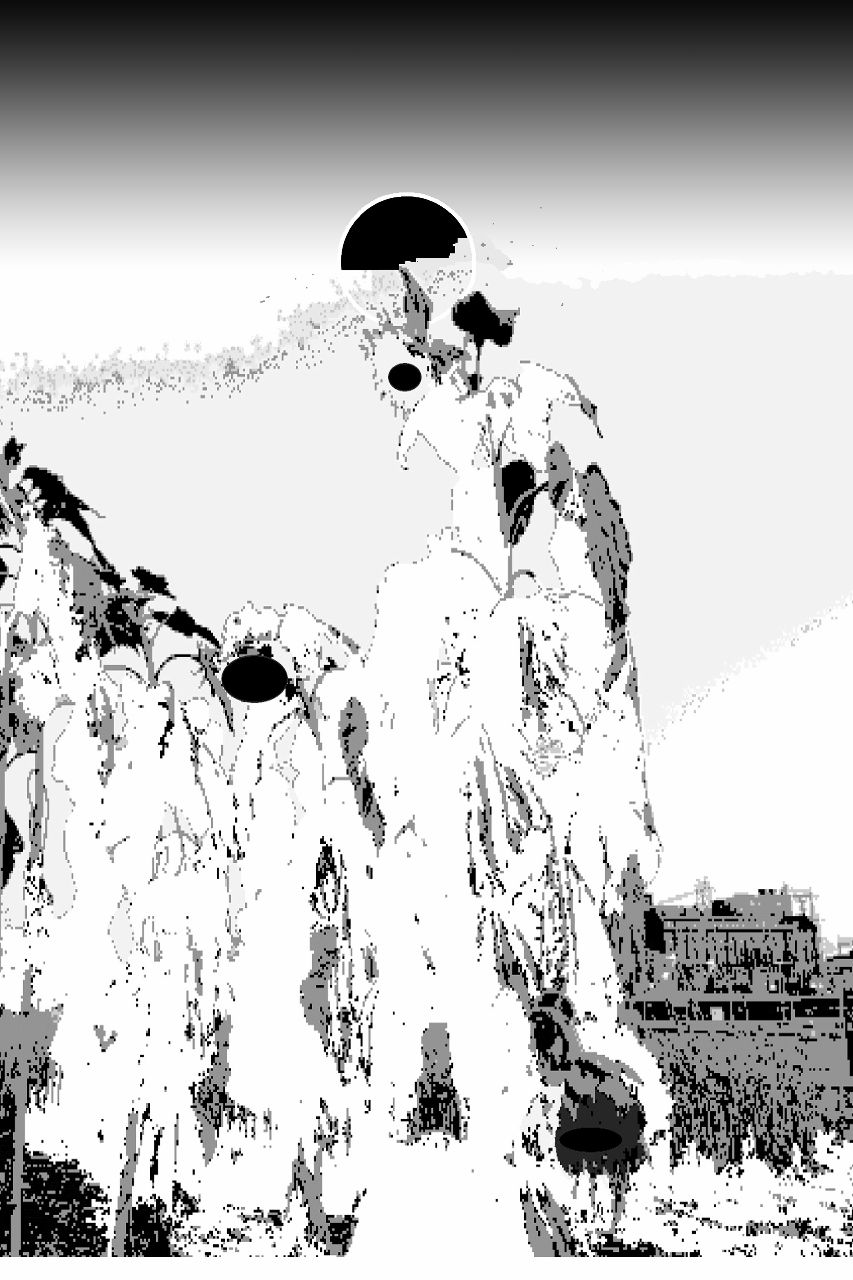 As the soon-to-be hero grows older it ventures further from the peasant village. The peasants fear for it a little. They tell it that it should not go and do these things because it’s dangerous out there. But the peasants secretly hope it will venture out anyway, because the peasants love the hero and believe in it. When the hero at first fails, they take it back and heal it. They keep it in a warm cottage and wrap its head and chest with white bandages. The hero sleeps for three long months. It thinks only of the fountain bubbling outside. Finally, healed, the hero sets off again, and this time succeeds.

A little girl with a loud voice eventually conquers the hero. Before then, though, when she is still young, the wise elf calls her to the elf’s kingdom up in the trees.

The kingdom is serene and green. The elf closes her eyes and puts her fingers to her temple; ribbons of flowers grow around her. Suddenly she stands up straight. “By the earthly wind!”  She whispers.

The elf listens. A breath grows around the trees.

“’Tis time for you to courtelay,” she says, and she rushes the little girl out.

The girl dreams about it that night.

The elf, lithe and white, velvety soft, and flowing burnished tresses. Peers out into the wonderland. “I don’t like the look of this,” she says.

The little girl grows older and cuts off her hair. One morning, on a walk, she comes upon an earthworm drying up on the ground. Remembering the empathy that betook her as a child, she brings it to the grass. She turns to leave.

“Little one,” says the earthworm.

“Thank you for returning me to the soil. You have saved my life.”

“Please, allow me to extend my blessing, as a gesture of gratitude. What do you wish for?”

And with that he was gone.

The worm’s head rises out of the dirt.

“Very well,” says the earthworm, its patience of a kind that must belong to nature itself.

He turns to leave.

“You can’t wait forever. Someday you will have to decide.”

(the voice was quiet and clear)

And with that he was gone.

A maiden with big boobs gets kidnapped by pirates. She is tied to a pole. The pirates harass her and tell her to walk the plank. “Damn pirates!” She snarls. “S’not the last you’ll see of me.”

The maiden walks the plank, hands tied behind her back, prodded at by hooks and daggers. The pirates are saying, “A beautiful day up there in the crow’s nest. Aye, Johnny Lye said so.”

Somewhere latent below the deck a clock ticks. Unfortunately nobody shows up to save the poor maiden and she dies. Too bad; she was quietly remarkable.

One hundred years later, a tall girl, great-granddaughter of the maiden, rushes by on a ship. Hair borne aloft by the wind, waving, curling, long; determined look on her face, she has set out to kill all the remaining pirates.

All these girls and their moms and eventual husbands and kiddos kiss their fingers and hold them up to the sky. Mwah!

A flock of medieval teenagers, thin and sylphy and tawny, hold hands and cavort around fawnlike among the trees. They play dancing games with daisy chains. They sing and strum the lyre.

One afternoon, they set out into the woods, a little braver than usual. They go where the trees grow thick. Eventually they come upon a cottage, built in the old way.

Innocently mischievous, they sneak in through the cracked door.

“Who goes there!” they hear in the darkness.

The light falls upon an old woman sitting in a rocking chair. She is gray and lined like a tree, big and wide and fat fat fat. She sits still.

Little flowers sprout in the cracks of her house, the teenagers now see.

The teenagers stay for tea. She is their granny.

A hero girl has the arrogance/selflessness to save her homeland, which is ravaged by war and disease.

The princess: snuck off, she did, with her suitor’s knight armor and weapons from the armory of the King, great prig.

The hero is a little peasant brat. She knows the slang of 15 tongues and is a friend to animals. Before she can set off on her journey (to save her homeland), she needs an efficient form of transportation.

She sneaks into the royal stables at dawn. There she sweet-talks the princess’s white horse out beyond the gate, and runs off with him.

The brat and the horse become dear friends. They communicate quietly. It’s a long journey. They are each other’s only companions.

Eventually the brat comes upon a book that has the power to heal.

She turns around toward the kingdom to recover the words of the book. But as they grow close, they are spotted by the king’s men.  They want White Horse. He couldn’t hide in the forest, shining white thing.

The brat rides the horse run for their lives. They won’t make it. The men are fast and strong, horses supple with feed. White Horse falls among the feet surrounded. Leg broken and thus worthless, it’s shot in the head. The peasant brat rips her heart out and cries. She’ll remember that day. Ugly and brown and rolling and rumbly.

If you want to get it done, do it yourself, the brat would whisper beside White Horse on the long and lonely stretches, ’till it was worked into her heartbeat. She didn’t know that cherubial little spirits watched over her all along. Their faces rested on crossed hands. They offered her gifts she thought she had procured herself.

The brat eventually saves her homeland with the book of healing. And so the homeland pleasantly chugs along for another couple centuries, waste-spewing but with a little more knowledge and sensitivity.

Despite the brat’s great accomplishment, she suffers. She thinks how nice it would be to be called beautiful, just simply beautiful, like by a shipdeck wartime sailor wrenched tragically apart—O! Please, great, kindly, awesome, amazing, and perfect God!—but it’s not her fate.

The brat makes many friends along the way. They say, take what’s here in front of you, you, us, the weeds is enough, the trees, the big blue healthy sky, the blueness of which is like a homegrown everyday spirituality, something that everybody can have. The earth yawns with empty space sometimes and not enough wishes get granted. She’ll fucking kill all the bad guys though hahaha.

The brat always had a childhood friend. He was an apprentice to the lighthouse, i.e. faraway but shows the ships to home. When the brat last saw him he told her she was smart and strong and brave. She does not see him again until she’s old and figures it out.

Figures what out? Figures something out.

Or else the brat finds an angel boy caught in a chainlink fence outside the church, blonde, white, pale in a loincloth, and half-dead. As he sinks into the roses on tangled coiling vines she grabs him and wrests him from them. He is stuck with heart-shaped poison arrows, and wordlessly she gets to work unstucking the arrows and sucking the blood out.

A hero girl runs to the fore of an exodus probably thousands strong as it crosses a mountain. The mountain is obliterated underneath them. At its peak she sticks out her arm and shouts “THIS WAY!” They’re going the wrong way.

And she cries, because the mass of people coalesces, antlike, into a giant pig-shaped mass bearing down on her. She holds them back with both arms straining, legs deep in water, wet with fluid, blood, sweat. Eventually the bombed-out world regrows. The end.