A Community Blossoms in Fox Point 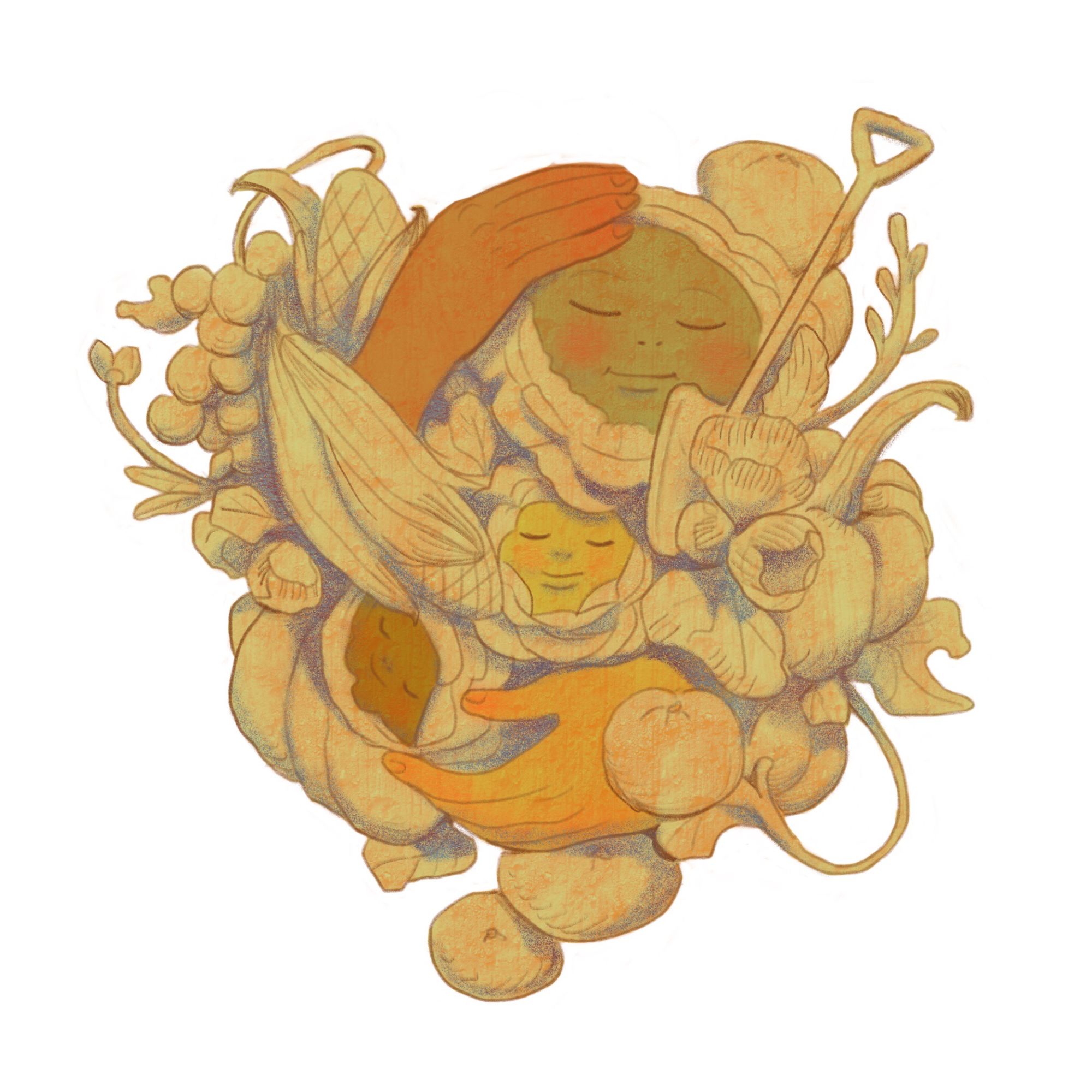 At the entrance of the Fox Point Community Garden in Providence, a painted sign greets guests: “Welcome visitors! You can pick your friends, you can pick your nose, but please don’t pick our veggies.”

Inside, gardeners Anastasia Azure and Michael Soucy kneel over plot 75 of 127, brandishing clippers against tall winter rye grass. Azure and Soucy are two of about 100 members of the Fox Point Community Garden (FPCG), and they consider themselves lucky. “There’s a pretty big waitlist,” says Azure.

FPCG was established in 2006 on Providence city property with bond money from Ward 1 City Councilman David Segal. The bond initiative aimed to create a community space where city gardeners could come together, grow fresh food, and share knowledge. Members pay a yearly fee of $25 per plot and can grow whatever they choose—food, flowers, or both—as long as they avoid using chemicals and pesticides.

FPCG offers Providence residents more than just vegetables; it provides an opportunity to form a community around the site. The FPCG website emphasizes this: “We believe that community gardens not only serve to green the urban landscape but build strong, vibrant, and socially aware communities by putting community members back into dialogue with their neighbors and their environment.” FPCG enacts this belief during several events throughout the year; in the spring, the group has potlucks where members gather around picnic tables and eat food they grew in their plots. They also hold an annual Harvest Party at the Portuguese-American Social Club, an organization that has supported the FPCG throughout the years. There, the gardeners enjoy music and raffles, and a chosen few are recognized for their hard work.

Keri Marion, the garden manager, believes that increased interest and participation in the garden, evidenced by the long wait list, could reflect a national pattern. “There’s been a growing movement over the last 10 years with people getting involved in where their food is coming from,” she told the Independent. According to a report by the National Gardening Association, two million more households participated in community gardening in 2013 than in 2008, a 200 percent increase in five years.

According to urban experimentalist and author Charles Montgomery, the benefits of such community involvement could have significant impacts beyond those related to food. In his essay titled “Building Happiness,” Montgomery highlights how people report being happiest in cities with the highest levels of trust for their neighbors. “There is no more crucial ingredient for human happiness than strong, positive social connections,” he writes. “Connected communities are happier, more resilient in hard times, and better equipped to handle economic challenges.”

Fox Point exemplifies this type of connected community; it’s clear that the more time the gardeners spend together, the more they look out for one another. Marion describes how she often checks on an older gardener as she passes her house on her way home. “It’s not a big deal,” she says. “People know their neighbors.”

Keri Marion, the manager of FPCG, has been a member of the garden since 2009 or 2010—“a long time ago,” she says with a laugh. She has been gardening for even longer; she maintained a plot in a community garden in Pawtucket before she moved to Providence. After two years as a member of the FPCG, she applied to be the garden manager, a volunteer position, and got the job.

Marion sees her role as being a point of communication between the members of the garden and the board, which meets four times a year to discuss the needs of the garden. The day I visit her, however, her main job is collecting names and money from new and returning participants.

“We don’t make any money,” says Marion from her seat on a small set of metal bleachers overlooking the soccer field adjacent to the garden. It’s a deliberate decision, as she and the board members realize that the gardeners don’t necessarily have much extra money to spend. “A lot of people are here who really can’t afford to live here,” says Marion. This has been an issue since Fox Point began gentrifying in the latter part of the 20th century, as a result of the establishment of historic districts, the expansion of Brown University, and re-investment in infrastructure. “The disparity between [the East Side of Providence] and the rest of the city has widened markedly during the last 40 years,” wrote Steve Triedman, City Editor of the East Side Monthly in 2015. “Some property values have increased between 300 to 800 percent since 1976…taxes have only gone up.”

Fox Point’s gentrification raises the question of whether community gardens are beneficial for lower-income residents living in gentrifying communities, or whether they actually speed up the process of gentrification. As Josh Singer, executive director of Wangari Gardens in Washington, DC pointed out to Civil Eats, “I’ve seen a lot of maps where it looks like we’re increasing food access [in DC], when we’re actually just pushing poor people out...Say you have a neighborhood that is a food desert. All of a sudden that garden is just full of people who recently moved to the neighborhood, who are all good people, but who aren’t really food insecure.”

Not all of FPCG’s gardeners rely on the garden for food—some joined the garden for the sense of community, and only grow flowers. However, FPCG is conscious of the food insecurity issues within Providence. The garden collaborates with the Camp St. Ministries, a local food pantry, to donate their members’ extra crops every Thursday. Marion also tries to ensure that participation in the garden remains affordable. Low dues are possible in large part due to contributions from outside organizations and the fact that maintenance issues are generally solved by the gardeners themselves. Perhaps because of the affordability, however, the demand for garden plots is higher than the supply.

“How’s the waitlist this year?” one gardener asks as he hands Marion $25 in cash.

One couple describes how they’re used to a big garden, and there’s not enough room for squash and zucchini in their small plot; they have to limit what they grow. Like many members, they’re trying to get another plot, but you can only get a second (for $30) if the wait list is exhausted—and that looks unlikely to happen anytime soon.

Currently Providence is home to 23 community gardens, according to Farm Fresh Rhode Island, a nonprofit aimed at growing the local food system. That number is likely to increase in the future, due to plans by the Providence Urban Agriculture Policy Task Force. The Task Force was initiated in 2004 by the Southside Community Land Trust, an organization that manages 18 gardens in Providence and Pawtucket and provides agricultural resources, training, and support to other gardens in the Providence Community Garden Network. The Southside Community Land Trust’s mission is to provide access to land, education, and other resources so people in Rhode Island can grow food in environmentally sustainable ways and create community food systems where locally produced, affordable, and healthy food is available to all.

According to the USDA, 12 percent of Rhode Islanders, 51,000 households, are food insecure, meaning they are often unsure where their next meal will come from due to lack of resources. In Providence's West End neighborhood, only three miles from FPCG, nearly a third of residents qualify as having low food access, according to the USDA’s Food Environment Atlas.

Thirty minutes after I started talking to Azure and Soucy, they are almost finished cutting the winter rye. Now they can address their other goal for the day: planting snow peas. They also grow cucumbers—a special variety that’s good for making pickles—kale, and strawberries.

Soucy lifts the watering can and pours it over the newly planted pea seeds, careful to avoid watering the remaining winter rye that has been cut nearly to the soil but hasn’t been fully uprooted. “I read you’re supposed to use a really sharp hoe,” Azure says. “We need to do more research,” she confesses. With a laugh, she adds, “we’re not professionals.”

This is true of many of the gardeners with plots at FPCG. Some have lots of gardening experience, but others are amateurs who have learned from other members since they started.

Standing with one foot on the wooden edge of her plot, Azure looks down at her garden. “I guess that’s kind of the fun of it, you don’t know how it’s going to turn out.” She grins. “Each year we learn a little bit more.”

CASHEN CONROY B’19 wants to grow a patch of cashews.