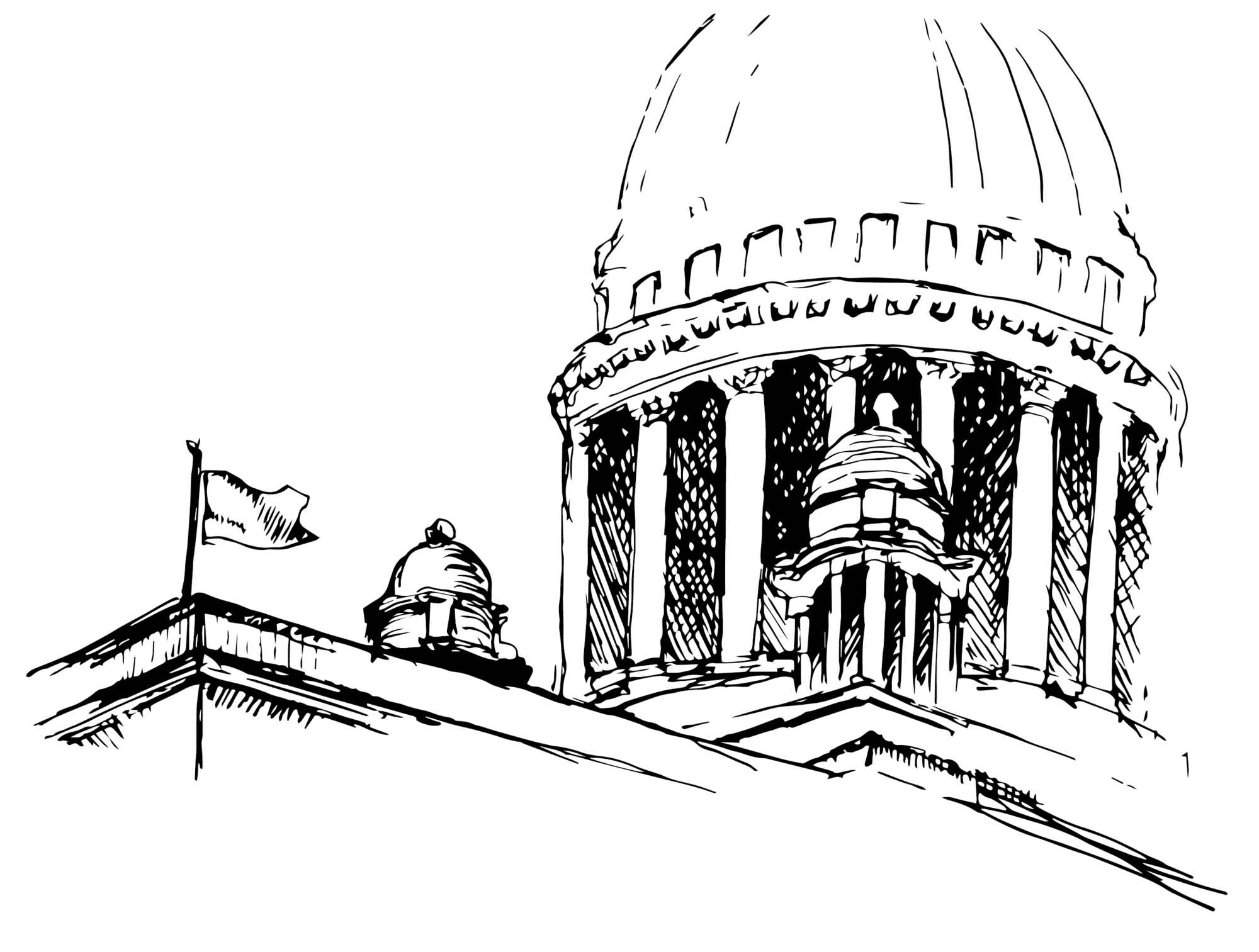 The Rhode Island General Assembly’s youngest Representative—26 year-old Moira Jayne Walsh—thinks her colleagues have it all wrong when they avoid canvassing unlikely voters during their campaigns. “I wasted my time,” she mimics in their imaginary voice before snapping into her own: “No. Talking to another human being is never a waste of your time.” There may be a caveat to that, however. “I don’t like dating,” she says. “I’m busy lighting the fires of revolution. I don’t have time to go to the movies.”

It’s a Sunday in May at the end of a week off from legislative duties, so Walsh is catching up. As much as she can, of course, given the frequent interruptions from her three year-old son Malcolm. She is seated in a pile of blankets and pillows on her bedroom floor, and a large stack of paperwork is her focus—mostly collections of data from lobbyists or written testimonies from hearings. “Most of my colleagues just throw all of this stuff away,” she says. But Walsh reads it all.

Elected in November 2016 to represent the third district in the Rhode Island General Assembly, Walsh is perhaps best described as incendiary, a media darling with a few controversies already under her belt: since her election, she has lost a job, garnered publicity for her comments critical of drinking at the statehouse, and, in her own words, “[made] a lot of enemies.”

Her shift from working as a waitress at the Classic Café in Providence to the Capitol has been a significant transition. “I have a tendency to not want to like politicians,” she said, “I know I am one, but I still don’t identify.” Unlike most of her colleagues, Walsh is a single mother, has no college degree, and lives entirely off her part-time legislator’s salary of about $15,000 a year. “Even the most progressive of my colleagues are still of a certain class,” she says. Walsh stands out. In some ways, quite literally: at the close of one April session, all the representatives rose, and Walsh’s red sneakers with white laces looked small and flat in the sea of beige and black high heels.

“I am here to serve you, my neighbors,” her website reads. Walsh speaks about her “neighbors” a lot. As Walsh grew up in the predominantly low-income Smith Hill neighborhood in Providence, she has gained a unique awareness of and intimacy to the issues represented by local legislation aimed to assist working-class residents. Next year, she says, she wants to focus on the opioid crisis, and calls her own experience a qualification. “I, as somebody who has a relative who’s addicted to opioids, know that they’re just going about it the wrong way,” she says. She wants to regulate opioid narcotics without criminalizing them, part of a larger effort to convince politicians to allocate resources to people unjustly perceived as less worthy.  “I just want to make it a little less expensive to be poor.”

In 2015, Representative J. Aaron Regunberg sponsored legislation to raise the minimum untipped wage from its rate of $2.89 to $3.89. Walsh, who still speaks openly about the difficulties of working as a waitress, was brought to the cause by a co-worker trying to get her involved in the activist scene. The co-worker brought her to an industry night at a local bar, where Walsh was overwhelmed by support from fellow restaurant workers from the Restaurant Opportunity Center. They encouraged the 23 year-old single mother to fight for her rights, and soon Walsh joined their ranks. At their lobbying event for the bill at the State House, Walsh connected with Representative Regunberg, who encouraged her to testify.

She advocated for the higher wage on the Senate floor, returned weekly to testify, and became increasingly aware of the repetition, redundancy, and lack of responsiveness in the process. She grew tired. Her tipping point, she says, was a dismissive question from a legislator: Why don’t you just get another job, if you’re so unhappy with this one? She describes the way her eyes welled up with tears, and her question in response: where do I go from here? Met with indifference from both her boss and the politicians supposed to represent her, Walsh found her own response: “Okay. Well then I’m gonna come up here, and I’m gonna do it.”

In November 2016, Walsh took her no-nonsense attitude to the campaign trail. On election night, she and other progressive candidates in Rhode Island waited together for the results. She sat by the outlet in the wall with a dead phone, which she refused to look at even after it recharged. Her campaign manager, Laufton Ascencao-Longo, approached her and brought her away from the crowd to speak in private. Walsh was ready for the worst, but Ascencao-Longo told her she had already won, defeating incumbent Thomas Palangio by a 3.6 percent margin.

Walsh's father ran a furniture and appliance resale business called “The Earthen Vessel.” Her love of community comes through particularly when she speaks about him: “If people speak as nicely about me as they do about my father at the end of my career, I will consider myself a great success,” she says.

As a student at Rhode Island College, she studied Spanish, Arabic, and International Studies. She then transferred to the Community College of Rhode Island and changed her major to English. Around a year later, she was pregnant with Malcolm. She left school and never went back, and is hesitant to say she ever will, remarking that being a legislator is “hands-on” education.

Walsh’s outspoken demeanor has played a role in local controversies. In April, she made a comment on Matt Allen’s WPRO radio talk show about an excessive amount of alcohol consumption at the Rhode Island State House, saying that her fellow legislators had “file cabinets full of booze.” The comment—which she later said was an exaggeration—left fellow legislators angered and scandalized, and garnered significant media attention. Walsh remains unfazed, and despite public remonstration, is unapologetic in person. “I searched in my purse for fucks to give,” she says. “I don’t want to talk about budgets hammered. I can barely talk about a budget sober,” she says with a laugh. She wants her colleagues to know that their drinking is “on the taxpayer’s dime [and] on the taxpayer’s time.”

Larry Berman, Communications Director for the House, called the incident “unfortunate.” Drinking at the State House, he explained in a phone conversation with the Independent, is done symbolically, or after session  to “unwind.” He calls it “part of the political culture.” Walsh also pointed out the informal and unofficial meetings that happen in bars and restaurants, which have a perhaps disconcerting hand in shaping political decisions. “Is there some of that going on? Yes,” said Berman. But he doesn’t think that differs from any other professions.

As for Walsh, Berman said “she’s doing a good job.”

“She’s certainly passionate about what she believes in,” he said. A pause. “We certainly like it when they’re passionate.”

The Rhode Island General Assembly is, however, perhaps not as passionate as Walsh would like. “It’s very unusual up there to find people who genuinely want to make things better,” she says. Some of her colleagues are also progressives, such as 73-year-old Edith Ajello, who Walsh says “is just a fucking hero.” But Walsh’s peers are still subject to criticism, such as Representative Aaron Regunberg, whose virtues she does not extol quite as fervently. “I love that man, but he’s like—he’s exactly what’s wrong with the Democratic Party. He knows how to solve racism, and he’ll solve it for you.”

Walsh explained her assessment of Regunberg through a critique of Resist Hate Rhode Island, the Providence activist group co-founded by Regunberg pledged to opposing the policy agenda of the Trump administration. “Have you ever been to a Resist Hate meeting?...there are no Black people there. Period. End of sentence. None…you’re gonna solve racism with no Black people present, that’s your plan?” asks Walsh. “Good luck with that.” The Independent could not corroborate whether there were no Black attendees to the event—nor that there were not Black organizers present across the organization’s many activist events—but Walsh is not alone in noticing that some Rhode Island activist groups are disproportionately white, which is especially striking in a community that has long been driven by the work and concerns of organizers of color. In an article in Rhode Island Monthly, Ellen Liberman writes about Rhode Island activism in the wake of Trump’s election, especially in regards to first-time activists, who she identified as not “fully mesh[ing] with longstanding advocacy groups for people of color."

Walsh is strikingly aware of the gap between some legislators and their policies. “A lot of times good people make really bad bills,” she says.

Until this year, elderly and disabled individuals could ride the RIPTA bus system free of charge. A budget adjustment for this fiscal year increased the rate, charging them 50 cents for a ride. Walsh asserted that this was simply untenable, as the rise in transportation costs created the possibility of those elderly people without financial security going as far as foregoing food to be able to pay for transportation to doctor’s appointments. After her explanation that the policy would have real, immediate, negative effects, a colleague laughed: “There’s no need to be dramatic.” Since that conversation, budgetary policy has been passed to restore the free fare. This will take effect in January 2018.

Both in and out of the State House, Walsh’s objectives extend to the concerns of incarcerated people. A recently raised $300,000 will be going into a budget to develop programs for preventing recidivism rates for previously incarcerated people, and on the house floor, a collection of bills in the “Justice Reinvestment Package” have been passed to help reform probation and criminal record laws that may keep people incarcerated for overextended terms.

Walsh is also spearheading a community gardening initiative. As a former Catholic, she is surprised to find herself working with Father Jakob Thibault, of the Chapel of the Holy Spirit on Douglas Avenue. With his help, Walsh and other organizers hope to turn a property close to both the church and a middle school into a greenhouse to combat the area’s food desert. The process is still in the fundraising stages.

Walsh’s future legislative projects are rooted in reaching across the proverbial aisle. She thinks it is important to pursue financial responsibility and more rights for minority voters in the House. Republicans agree. She is seeking collaboration, recognizing that her legislative power is greater that way. In the case of the free bus passes, several versions of the same legislation were proposed, and while Walsh’s bill was one of them, it was not the one chosen.

This is a pattern, she notes: a reproductive justice bill was recently passed from a different representative, with language directly lifted from Walsh’s own proposed bill. “I could care less about credit, I just want to make sure it gets done,” she says.

In June, Walsh came full circle and sponsored a piece of legislation that proposed further increases on the minimum wage for tipped workers. It was held for further study. “Held for further study in the trashcan. You know. The held-for-further-study trashcan,” she says. She thinks this is a clear stance that House leadership is taking: “As you know, they don’t particularly like me up there, because I don’t shut up.” She’s happy, however, to play the antagonist, so long as her legislation is going through one way or another. “What they don’t understand is that it delights me.” She is no longer the waitress desperate to have her voice heard by an indifferent government. She is an equal, a colleague, and an unapologetic voice reminding the House to represent the people.

“I make them fucking crazy.”

CAROLINE SPRAGUE B’20 is looking for a cause of her own.