Identity and imagery in the blue light of nostalgia 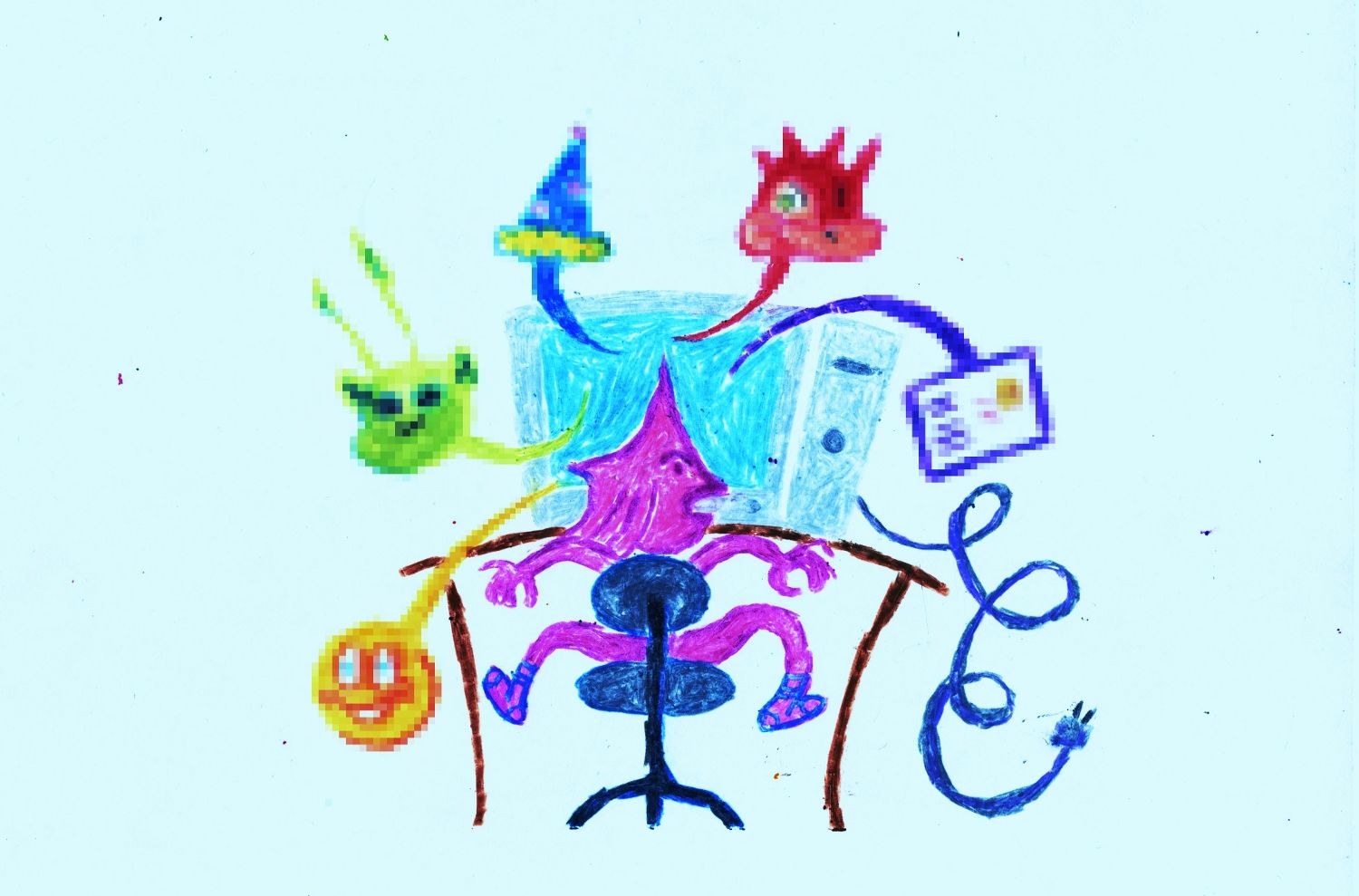 ON THE VISUAL IMPACT OF THE E-CARD

“Having a great time, wish you were wired!”

“Traveling the Net? Miss your buddies back at the domain? Send ’em a postcard!”

Under the above article’s subhead “Postcards From the (Cutting) Edge,” one is directed to the MIT Media Lab’s online “Electric Postcard” service. The website mentioned by Wired entices visitors with “more than 35 different designs, including well-known artists such as Kandinsky, Van Gogh, da Vinci, Gauguin, and the Alice in Wonderland print.” They await you in a static, pixelated lull.

A year earlier, in 1994, MIT computer science researcher and author Judith S. Donath published Inhabiting the Virtual City, a thesis on digital communication online. In it, she described the future of human interaction via the Internet and reported the unexpected success of the “Electric Postcard.” Somehow, this odd transmutation of the traditionally double-faced, physical postcard onto a flat RGB matrix had gotten to the heart of many early web users. With their pre-formatted, customizable messages and images to match, electric postcards presented users with a range of possibilities in digital communication that had not yet been seen. It was also free, and the tech inspired the recruitment of artists and programmers. This was a first step towards contemporary instant messaging.

The electronic postcard—e-card for short—was a design experiment that developed throughout the second half of the ’90s and into the new millennium. It grew alongside the World Wide Web itself, born in 1990. Communication underwent a metamorphosis as it tapped into the interconnectivity of the internet. It became unrelated to a real-life geolocation. There is a certain splendor in the e-card’s self-referential awareness of the World Wide Web’s virtuality. In representing virtual home and holiday spaces that evade the need for knowing real addresses or owning stamps, e-cards nonetheless offered the traditionally handwritten ‘Wish You Were Here’s so intrinsic to ‘real’ postcards—only typeset in Times.  Gone were the ink blotches and scribbled screw-ups. The unprecedented speed of online message delivery accelerated communication, making headway in the realm of the casual Internet conversation in ‘hey’s and hypertext. Conversations were generated by the pixelated e-card images themselves. Somehow, one could now actually travel to the place from which the card had been sent by following an embedded link. The rudimentary code and design decisions made during the development of e-cards were the some of earliest manifestations of the digital, instant, and illustrated messages we are accustomed to in 2017—in many ways, the e-card is the ancestor of both Snapchat and Instagram.

Current online platforms have recently seen a resurgence of the old-net memorabilia, full of glitter and flashy visual information. While much of it is simply an evocation of early web design, e-card graphics often show up, along with net art. Both are instances of embedded, pixelated files and code used to generate new forms of image creation and dissemination. As Donath explains, “The picture on the card takes the place of the message. It lets the sender express a bit of his or her taste (for humor or for the macabre or, most popularly, for Impressionist prints), like sending a little gift.” Sharing e-cards was far more time-consuming than exchanging simple text-based emails, due to the size of the (low-res) images. However, this was a novel and strangely ephemeral way of exchanging works of art and forms of expression with depths greater than what was possible through isolated text.

Nowadays, this sort of excitement has turned into a source of pure nostalgia. Likewise, it is at the origin of a number of works by new media artists and designers, notably contributors to the Brutalist Website project. Web Brutalists borrow from the early web, reflect upon it, and occasionally, give it an ironic spin. This ‘recycled’ way of shaping contemporary digital landscape comes out in the form of intemporal chimeras; using current CSS to emulate early visual or functional limitation of the early web. While this may be just another self-contained internet fad, the phenomenon describes the response of a generation of tech-savvy creatives to the acceleration of technology and its subsequently minimized, efficiency-driven aesthetics. An ever-growing cache of forgotten materials burgeons as we blast forwards into the future. No longer victim to the physical effects of deterioration, virtual matter is preserved in a capsule.

If the late ’90s saw communication translate the postcard into the digital realm, an example of future communication may just be the adaptation of the e-card into the next new platform. From the golden age of the postcard in the 1900s to the 2000s, it will have taken a century, for us to accomplish this. In 100 years, we could be looking at the e-card, forefather of online chat, being adapted into a post-e-card.

ON PERSONAL GROWTH IN VIRTUAL LIFE

Go on to the website Neopets.com today, and you will find a rich and dead world. You can visit Stonehenge. You can visit Machu Picchu. You can also visit the crumbling virtual world of ‘Neopia,’ a piece of internet ephemera standing as a new form of cultural debris. Launched in 1999 by idle British university students Adam Powell and Donna Williams, the website grew exponentially until it was purchased in 2005 by media conglomerate Viacom for $160 million. By this time, it had been alleged that the website accrued up to five billion page views per month with an active user base of 60 million people. 80 percent of these people were under 18 years of age. As the years went on, however, Neopets’ existing user base aged and a rotating staff lineup struggled to attract a new generation of tweens. The already busted virtual economy, trapped in hyperinflation, continued to spiral out of control as veterans of the site or adults with too much time on their hands accumulated points and kept the price of rare or coveted items at levels a new or casual player could not hope to reach without significant toil. To maintain profitability, real-money purchases were introduced, centered mostly around the customization of pets, while most of the staff was laid off and replaced by freelance work. This has resulted in the website’s slow grind to a halt. Today, Neopets.com is an example of abandonware, a term for code left unmaintained and preserved on the internet. For example, when features such as the ‘Key Quest’ multiplayer game break, they stay broken and on display. Quite a few people continue to inhabit the website’s dusty corpse, suggesting that the appeal of Neopets lies in a more personal type of game.

The main website created a comfortable playground for children’s internal lives. While other popular virtual worlds at the time such as Club Penguin or the more adult Second Life were predicated on user interaction, the lore of Neopets never seemed to feature the real world people in its user base. The world map of locations within simulated tourism was an open and inviting environment with the potential for anonymous adventure. It was a world that demanded participation: flash games, virtual storefronts, audiences with important NPCs with amusing flavortext. Attendance of regular site-wide events such as the yearly Altador Cup and lore-heavy story/puzzle combos such as the Curse of Maraqua created a simulation of community artificial enough to border on solipsism. All of this was shrouded in comfortable anonymity—almost all of these activities could be completed without discussion or interaction with others. A heavily censored forum and guild system allowed for social interaction in a restricted way, allowing more for roleplaying than discussion of real life topics. Neopets was a world as nonthreatening as a private fantasy. This fantasy, though, was fully illustrated, animated in a bright cartoonish style and had colorful anthropomorphised animals in it.

An open and safe environment invites creative play, and public Neopets activity is mostly creative in nature: contests ranging from visual art to html, a full user-submitted fictitious newspaper complete with a comics section. It is telling that the ‘contests and spotlights’ page remains somewhat active today—for a lot of users this is an excellent outlet to gain gratification from their creative endeavors. It was a structure in which to pour childlike enthusiasm and hyperfocus. This combination of encouragement, organization, and anonymous confidence incubated young artists.

This niche internet culture is rich, yet often invisible, as participation in it is necessarily solitary. Omitting full-on fanwork found on the internet itself, it is hard to determine any possible long term impact on art or this generation’s collective psychology. However, some artists such as Bunny Rogers, who explicitly plumbs imagery from Neopets in her installation work, light a possible path. In her installation “Michael” (2015), she appropriates official and fanmade images of Neopets and engraves them onto slabs of slate, seemingly to memorialize times of grief in her adolescence. She is able to use this imagery as a language to communicate her past and feelings in a way both humorous and poignant, proving that the deserted virtual worlds littering the internet are relevant still—they live as sites of nostalgia, and as wells of valuable material with which to contextualize the lives of those growing up at the beginning of the digital age.