On radiation, migration, and remembrance 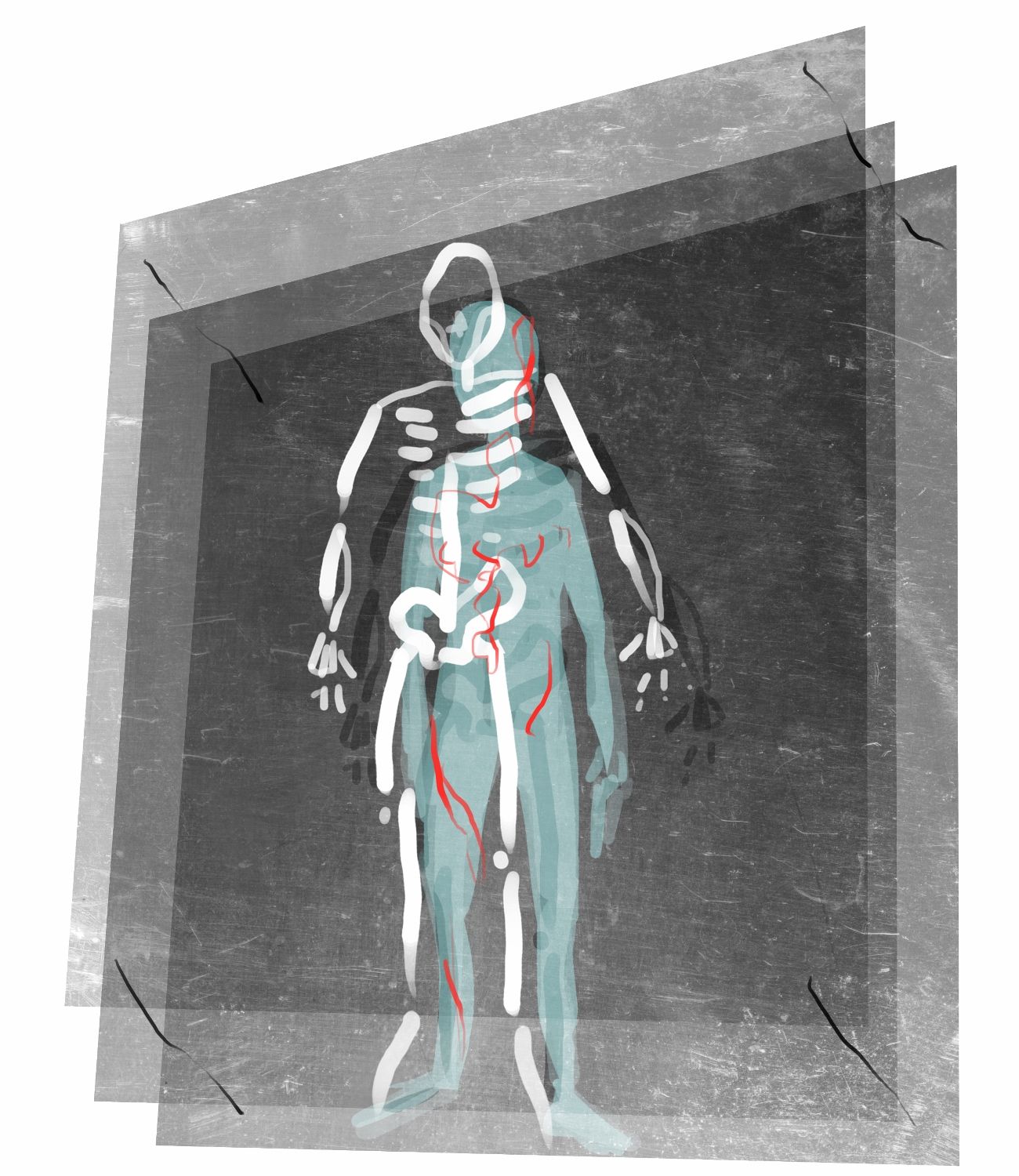 Never drink soy milk (the estrogen might interfere with my growth, and I would be doomed to shortness forever).

Never use those earbuds that go deep inside your ear canals (studies are only just beginning to show it, but they'll ruin my hearing down the line).

Never use a tampon (toxic shock syndrome could cost me my leg or my life; I could go to sleep any night with a tampon in and wake up 10 minutes from death).

Never stand next to the microwave when it's on (I can't see or feel it, but microwave radiation is leaking out of those vents).

Never keep your cell phone by your bed at night (cell phone radiation charging next to my head all night, every night is surely a recipe for cancer—and that is a risk we really cannot take).

In the fall of 2005, my grandfather discovered cancer in his lungs. His three-hour call to our house was the longest international phone call I can remember bearing witness to, back when you had to pay dearly by the minute to hear a loved one’s voice, scratchy though the sticky receiver you would clutch to your cheek. An ocean away, my grandfather sought out his own solutions, buying a device from an alternative medicine vendor that he held to his chest for hours at a time. It was vibrant and electronic, and supposed to break up the tumor with prolonged use. Instead, seven months later he was comatose, and one month after that, he was dead.

When my mother talks to me about cell phones, she uses the same tone of voice she reserves for my grandfather’s death. Sinking, ashamed, and resentful, she asks me: how can you think that holding electronics like that right up against your head can be good for you? Keeping your phone plugged in so close to your brain as you sleep? Finally, she tells me: I saw it happen with my own eyes, saw my own father's life drain away as he insisted on clutching radiation to his chest every night.

I know nothing about the progression of my grandfather’s lung cancer for over 10 years, though judging by the links my mother insists on sending me, it is certainly something she relives in the everyday. Major cell phone radiation studies reignites cancer questions. Alternative remedies threaten global health hazards. Instead, the story is something I have to piece together over the years—from her quiet and guilty shame, from our fights every time I get sick, from the way she argues with my little brother when he asks when he’ll get his own phone.
Five years after my grandfather’s death, when my other grandfather finds tumors in his brain—though he has taken cold showers for his health all his life, though he is known in his neighborhood for his morning runs—my mother says: it’s just like my dad again. Your dad’s father always stood right by the microwave in his tiny kitchen in China, and now look at the way he loses his balance. Look at how he can't even remember your name.

A faith in alternative medicine, a lifetime spent loitering waiting for the food to heat up: if you believe what my mother tells me, then these are our nasty family secrets, and they were my grandparents’ lethal mistakes. The only consolation is that they are mistakes with solutions—solutions that are straightforward and wishfully simple.

My mother tells me that she’s never been superstitious. She is at the tail end of a generation born on the eve of the Chinese Cultural Revolution. By the time my parents came into the world, Buddha figures across the nation were already being defaced, books and scrolls being burned in every town in the name of modernization. The purging of the old beliefs began in 1966 and went on for another decade; if China’s ‘backwards’ culture was the final tie to its feudal past, then for the revolution to succeed, everything had to go.

So what luck could red bring you, when your neighbors were being sent away to labor camps by Red Guards decked out in the same color? What did it matter if your windows faced an auspicious direction? Feng shui wouldn’t protect your friends when the troops showed up at Tiananmen Square—and practicing it openly could kill you even quicker, get you disappeared for clinging to bourgeois superstition. Would an amulet have helped? A fortune told or incense burned? Every temple my family has ever taken me to has been a literal museum.

When modernity without spirituality is the world you grow up in, when practicing the old religions would kill you before they could save you, then science is the one thing you learn to hold on to. Though intellectuals found themselves thrown out with superstition, the scientific establishment was among the first to emerge from the ashes once the Cultural Revolution was over. Like thousands of others in her generation, my mother did science so well—crunching numbers, writing code, passing every exam—that it got her a student visa, a ticket out of China, a future across the ocean, and a glittering American dream. So if science appears to proffer an explanation for my grandfather’s death, and reveals a solution to make sure nothing like it happens again—what more could she ever ask for?

(Misleading) studies show, and (tabloid) headlines reveal, and so my mother believes and believes and believes. From cataracts to cancer, the REAL dangers of microwave ovens. Risk of brain cancer can triple after 25 years of cellphone use.“Game-changing” study links cellphone radiation to cancer. Her emails light up my phone screen in the middle of class, in my bed late at night, in the mornings when I wake to shut off my alarm.

I sometimes contemplate asking her: Do you really think that radiation from household electronics was worse for my grandfathers’ bodies than the stress and malnutrition of growing up during a decade of war with Japan? Or the horror of watching thousands die of starvation in their respective home provinces over the course of three years? Or the mysterious disappearances and the public executions that followed in the decades to come? Or maybe the cancer just happened, as it does in bodies all over the world and from all walks of life.

But war and famine, poverty and repression are not optional for those caught in their midsts. The idea that such trauma might be sticky—might be a monster that sinks into your skin or your brain or your lungs and won't wash out—is terrifying. Accepting that would be tantamount to believing that we carry with each generation traces of the one that came before; every dream and desire, but also every wound and every heartbreak. We would be composites of injuries both ancient and new. Scar tissue too tangled to trace, so that the only thing we would know was that there can be no life without some kind of healing, however crooked.

Still, I think there is nothing my mother has ever yearned for more than a fresh start.

Though she shies from microwaves and cell phones, my mother spends her days in front of a computer, as both my parents have done since they immigrated in the ’90s. She writes to me in an email:

“I left my home country in my twenties. I don't have permanent attachment to anywhere. I don't believe in nationalism. I'm a world citizen.”

If she ever feels any longing for the country that she left behind, she certainly disguises it well enough, in blunt English and a tone so obstinate I can feel its sting over email. Perhaps she wants these words to sit heavy in my inbox, as they radiate up at me from the screen of my phone, so that I will believe their undeniable truth. Yet I also suspect she has genuinely unlearned her yearning for any homeland, if the idea of the good life in China was lost sometime before her birth, before the civil war and the Japanese occupation and the endless internal migrations. Like sweet dreams and second languages, the good memories of life on the mainland evaporate all too easily without the practice of remembering. And my family has never been particularly talented at storytelling.

But the bad memories live on: in technological fixations, in mysterious neck pains, in outbursts of anger, in the ability to see betrayal anywhere and everywhere.

“I learnt from Chinese history in the past 80 years,” she writes. “No cause is worth fighting for except your own. People is forgetful and can quickly turn their backs on you.”

Maybe she meant to say “that’s how much I care about you,” but it came out all wrong. Maybe: “Something out there could hurt you, but I am doing the best I can.” It is a warped way of saying that. But I believe her.

Here’s what I learn from what my mother tells me:

There are forces you cannot see at work, and though you may not know it now, they are taking the people we love from us, again and again.

You must do everything you can to survive, no matter how much it hurts.

Here’s what I learn in spite of what my mother tells me:

Sometimes you lose and you lose.

It is okay to not have all the answers.

Still there must be a way to trust in the world, to seek out pleasure in its company even without knowing the consequences, and you must look for it no matter how much it hurts.

My own birthday nears, and with it, the birthday of my late grandfather—a time of year when my mother grows more silent and more tense. Every fall, I am reminded that I must read this family history with all the context clues I have managed to scrounge together. The story does not make sense without my mother's fixations, without the Wikipedia articles and the history books, without the impulsive disclosures my brother and I have collected through the years. With each year, I learn to tell this story a little bit better.

At my favorite Asian grocery, a thick bundle of cheap incense costs two dollars. No one ever told me it was healthy to breathe in so much incense smoke, but I don’t like to write about either of my grandfathers without a stick burning. Finally, I close my mother’s email to me. I plug my phone in by my pillow and set my alarm for morning. These are my rituals, so different from my mother’s. I never forget the things she insists on, I only find different ways to commemorate them.

JESSICA JIANG B’20 still doesn’t know how to take a compliment.