A Conversation with Rachel Glaser 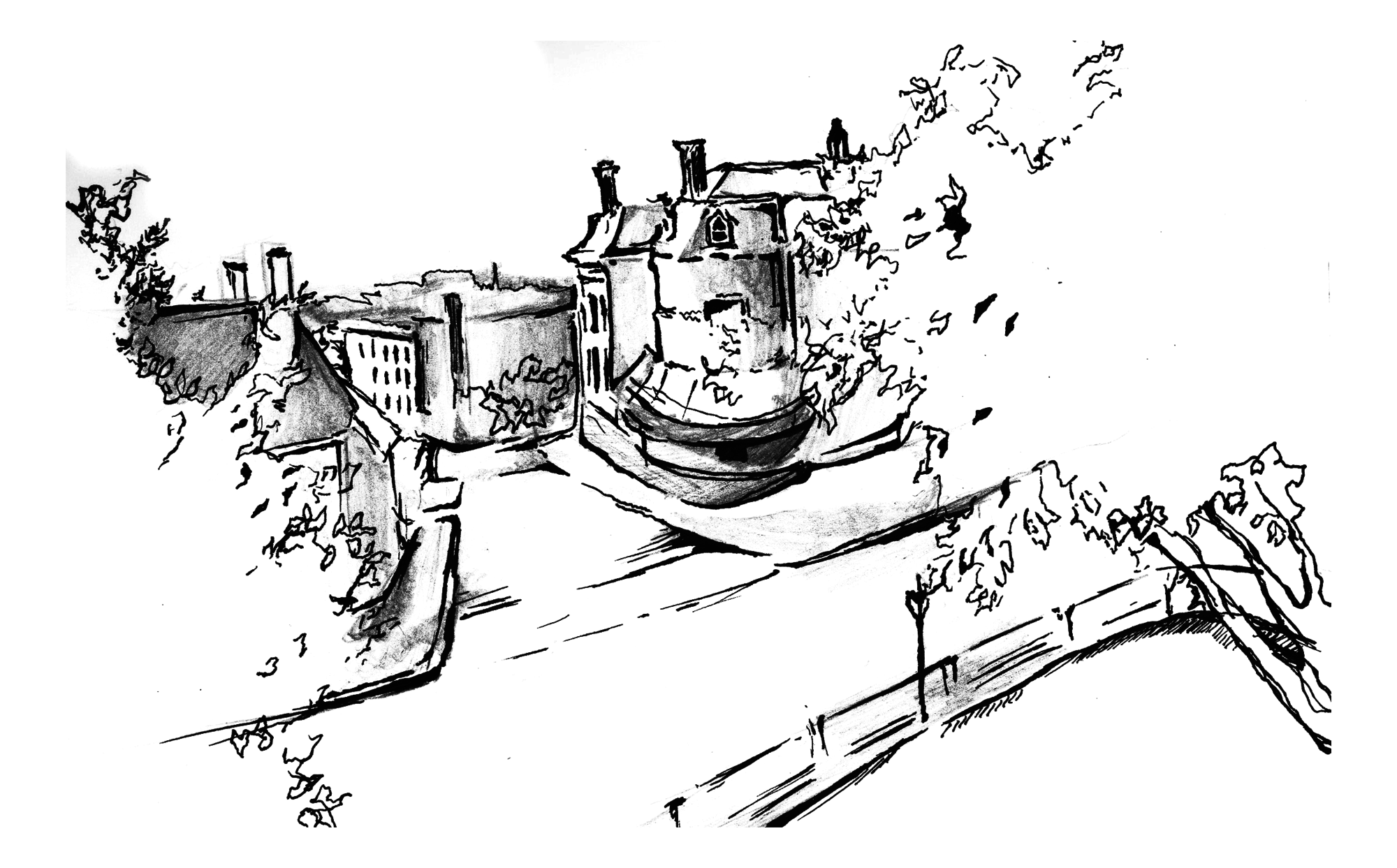 Rachel B. Glaser is the author of the short story collection Pee on Water (2010), the novel Paulina & Fran (2015) and two poetry collections, MOODS (2013) and HAIRDO (2017). She received her BFA in Painting from RISD and her MFA in Creative Writing from UMass Amherst. This year, she was selected for Granta’s Best of Young American Novelists 3—a list that has previously included writers such as Jeffrey Eugenides, Nicole Krauss, and Akhil Sharma.

In Paulina & Fran, Rachel works with different textures of emotional intensity to paint a portrait of two fabulously volatile characters and the interior worlds they inhabit. In her own words: “...there aren’t just two moods, there’s a whole range, and the colors are flashing.” Reading her work is like looking at the world through a filter that makes every color brighter.

Rachel spoke with the Independent about Providence, relationships, shifting moods, and candles with faces.

The College Hill Independent: I wanted, first of all, to talk to you about Providence. The Indy is a Providence-based paper, and the first half of Paulina & Fran takes place in “a New England city” that’s pretty unambiguously Providence. I’m curious about the role that the city itself takes on in your narrative. How did you come to work with Providence as a setting? And why did you choose to leave it unnamed?

Rachel  B. Glaser: The novel started out as a three-page story and it didn’t take place at an art school. I think, in my mind, I was picturing Providence because that’s where I went to school. It was a really short story that barely mentioned place. Then, as the story became longer and longer—when I realized I was going to turn it into a novel—I thought I might as well set it at art school because I have way more to say about that. So I was picturing Providence, but I realized that to name them ‘RISD’ and ‘Providence’ would only limit it. In the book, whenever it feels placeless and epic, I like the drama of that. And I was picturing all these memories. Providence in general, when I’m there, I feel like I’m in this weird dream of the past. And then it got crazier when I started to go to Providence after having spent so much time writing about it and imagining it. It became even more mystical.

The Indy: Because it’s also the setting of the ‘placeless epic’ that you were imagining?

RBG: Yeah! It’s a just weird mix. In the beginning, I had real street names. In some versions, it would say “Benefit Street.” And then other times, I thought no, maybe that’s distracting, even to the people who know the places. Maybe they would think, “I wasn’t picturing that there!” or “That’s not there anymore!” But I was picturing Providence, and I think it was a good setting for the drama.

The Indy: It’s a pretty dramatic book. There’s this line that I love—where Paulina yells at Fran, “I was only friends with you as a novelty! How a child picks an ant from a pile of ants and makes it their pet for the afternoon.”

RBG: Yeah! That’s the kind of line where it’s really fun in a book, and then you try and put it in like a screenplay, and you’re like oh, that doesn’t sound like something someone would say.

The Indy: Well, in the writing itself, all the characters’ emotions are sort of heightened. It feels like reading fantasy even though it’s not fantasy at all.

RBG: That’s the thing I’m going for. There’s this James Purdy book I really like called I Am Elijah Thrush. It’s really funny and dramatic and eccentric and complicated, and when I searched it online, I found this review that called it “social fantasy.” I’d never heard that term, and I got really into that idea, that if you make people’s emotions volatile and strong and changing, it can create an altered reality. Not like a sci-fi reality, but like what you’re saying. Heightened, or dreamy, or strange.

The Indy: It’s like the interior lives of the characters are exploding everywhere—that’s how it felt to me. In a good way.

RBG: That’s what I was going for! I love switching point of view. Everyone’s feeling something, and I think it’s really fun when you get to switch, and see it all in the same scene.

The Indy: I’m so fascinated by how your characters’ personalities seem to change constantly over the course of a day. Their personalities shift based on how they’re feeling about the bra they’re wearing, or how their hair looks that day. It got me thinking about how in fiction writing, we talk about “dynamic characters” as if character change only happens over the arc of a whole novel. How did this notion of ongoing changes and switches affect your approach?

RBG: I’m really interested in how quickly people’s moods change, and how quickly our realities are changing. Someone asks you, “How are you?” and you say that you’re good or you’re bad. But it’s crazy how you can be having the shittiest day and still have fun at moments. The emotional range of a day is really interesting. Of course big things are happening, but there are these miniscule things that add up to make you unhappy, or happy, or scared, or excited. That’s something I wanted to show in Paulina & Fran—the tedious emotional lives of the characters. What makes them happy or sad isn’t always big things. I tried to show that, as you grow older, it’s not like that changes. The human condition is just crazy, shifting moods. And so much of fiction is based on the bigger things.

The Indy: But the smaller things matter, too!

RBG: Yeah, and the small can be linked to the big. When I was editing, I remember there were a lot of lines about hair, and at some point I wondered if I should hold back and not have so many lines about hair. But even though they’re about hair, those are sort of symbolic moments of how the room is feeling, or how certain characters are rising and falling. Small things can act like motifs and drag the reader into this world where it really matters how your hair looks. And in art school—what you wore was such a big thing then. If you’re spending all this time making art, presenting images, making statements, experimenting, then it’s sort of natural that some of that would come into play when you’re leaving your room.

The Indy: Attraction is pretty complicated in this book. I really liked the ambiguity of Paulina and Fran’s relationship, where they’re pushing and pulling as friends and/or lovers and/or enemies the whole time. How did you approach bisexual representation as you were writing these characters?

RBG: When I was at RISD, I think a lot of people were just trying to figure out how they felt about each other, rather than identify exactly what they were. In the first draft I ever wrote, which was just this weird three-page thing, there was a lot of tension between Paulina and Fran. But in the original thing, it didn’t go as far. Many of the scenes I ended up writing weren’t part of the original plan. It just felt like these characters were gaining lives and opinions and desires, and that was really exciting, to feel like, “Huh, these women are leading me towards this!” or “Huh, now I’m writing a scene like this!”  You know? I didn’t set off to say anything about bisexuality.

RBG: People say “This is my friend” and “This is my boyfriend,” or “This person’s gay, this person’s straight.” We like to predict and define what our relationships are. But if you think about your friends and your family, acquaintances and coworkers, each relationship is totally different and has its own set of tendencies, rules, and histories. That’s what was so fun about writing these two people. The way that they felt about each other changed a lot. It goes back to that mood thing—that there aren’t just two moods, there’s a whole range, and the colors are flashing. Putting any two friends or lovers together, the feelings and the power-struggles, their morphing moods and relationships become this sort of human monster that can be captivating, if you capture it right. That’s what I was trying to do... capture the monster.

The Indy: I don't want to forget to ask you: what’s the origin of your Twitter and Instagram handle, “candle face”?

RBG: That’s from a game of “exquisite corpse” with my friend from RISD, Julio Gonzalez, in 2005 or 2006. Those days, someone would draw the head, then whoever drew the torso would sometimes draw another head. We were doing one and we could see that there were two different creatures emerging. When we opened it up, there was this crazy creature on the left, and on the right there was this candle-faced creature. It had a flame and two different smiley faces on different parts of the flame. Maybe two flames. And then there was the candle’s body, with a claw-like hand, and it was wearing a Nike racquetball glove. And I just thought it was so funny that this creature had arrived. I thought it was a good character, and at the time I was making hand-drawn animations. I had an idea for an animation with this candle-man doing all this stuff. I did a few drawings, and the animation never happened, but it ended up becoming one of my online names. Around the same time of that creature, I was writing the story “Pee on Water,” in the story collection Pee on Water, and in the very end of that story there’s a line like, “candles coy and shy their hot face.” I can’t remember which came first. But I was definitely, at that point, thinking a lot about candles having faces, flames having faces. When it’s the anniversary of the death of one of my grandparents, I light a yahrzeit candle. In some way, I like to think that my dead grandparents are watching me through the flame. There’s a connection between flames and spirits in my head.

The Indy: That’s so cool, how you’re working with overlapping imageries. How do you view the relationship between your visual art and your creative writing, in general?

RBG: The two are very linked. I really believe that artists should experiment with all mediums—painting, drawing, fiction, poetry, screenplays, plays, music, collage, and sculpture. All art making informs future art making. I find great freedom in feeling like a beginner at something. When I was at RISD I felt like a painter who wrote, and now I feel like a writer who paints. I’m way more fluent in writing—my painting is less advanced. There’s a lot more I want to try, and need to try, to learn how to make the paintings I want to make. I want to make looser, weirder, funnier paintings. There are things I’m able to do with words that I’m still learning to do with shapes. But yes, working in one genre helps me figure out things in other genres. Last night I was watching Curb Your Enthusiasm, my favorite TV show, and marveling at the nonstop social tension, and realizing how it’s been very influential to my writing, especially a new novel I’m working on right now. I know you didn’t ask me for advice for college writers and painters, but if you did, I’d say, “Try everything! See everything!” and “keep a notebook” and “be sweet and encouraging to yourself.”