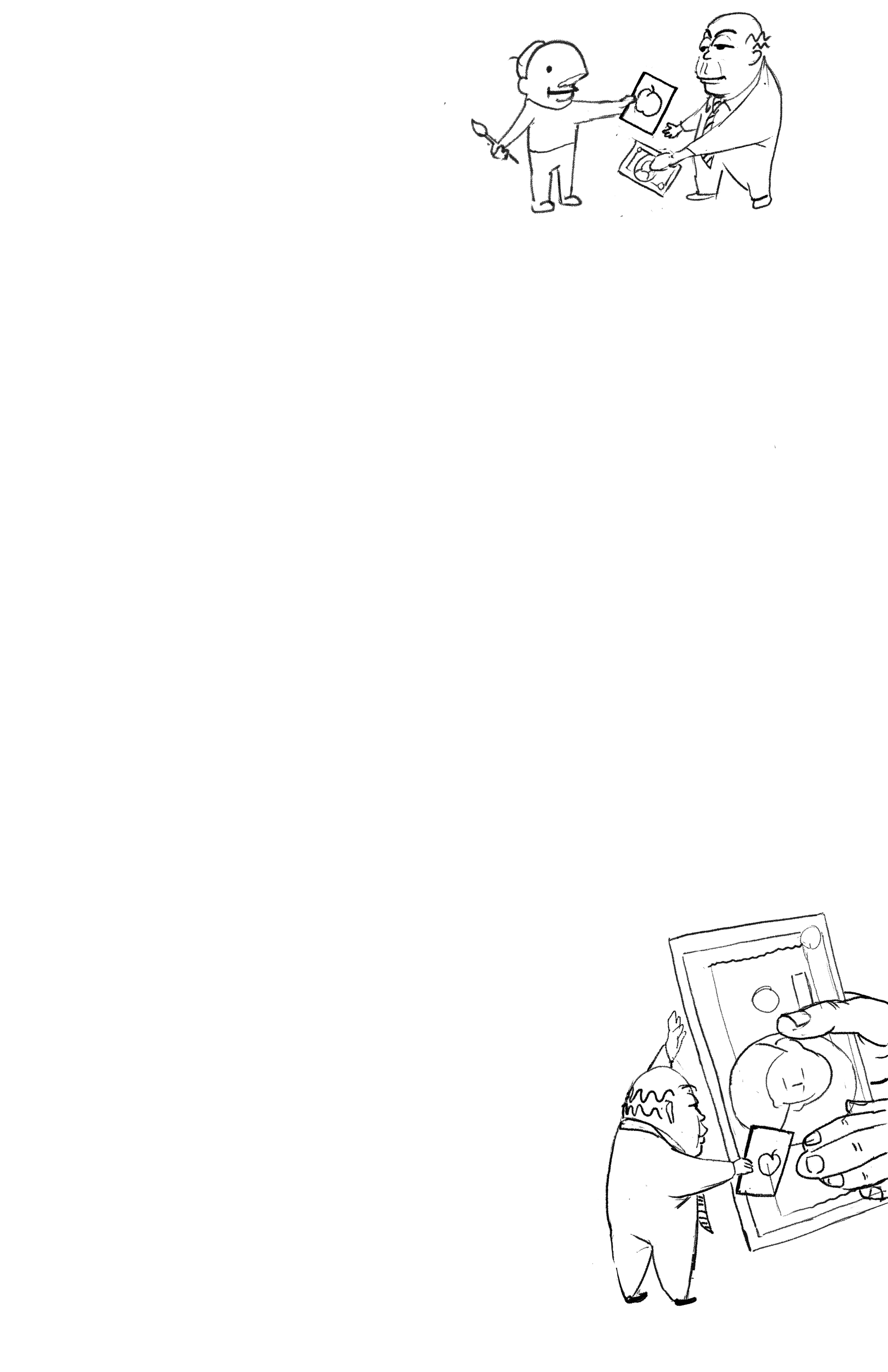 On May 17th, New York artist Jean-Michel Basquiat’s piece Untitled was bought at auction for $110.5 million. The painting, sold at Sotheby’s auction of contemporary art, set a record as the most expensive work of American art sold at auction. The work depicts a skull rendered in Basquiat’s signature neo-expressionism, reminiscent of graffiti. Japanese billionaire and art collector Yusaku Maezawa purchased the work with the pledge to tour it around the world so that others, too, may have a chance to view the so-called masterpiece.

The veneer of generosity embedded in Maezawa’s promise feels futile in the face of a highly privatized  art market, marked by the lack of US legislation to ensure Artist Resale Rights (ARR). Without proper ARR law, artists’ works can be resold at auction for higher values than their value when they were originally purchased. This generates massive profits for dealers, collectors, galleries, and auction houses—while artists, without whom the art market would not exist, receive no royalties. Not only does this unregulated model of artistic and intellectual exchange further economic inequality, it also manages to ensure that the majority of working artists cannot financially sustain themselves solely on their practice. One wonders how much art is stuck unrealized and unmade because a career as an “artist” is often, understandably, taken as a luxury.

In this way, the fight for ARR law is also a fight against the force of global wealth inequality. It is a fight against auction houses and galleries that sell pieces to multimillionaires, fully aware that these works will be locked away to accrue monetary value.In an essay that accompanied performance artist Andrea Fraser’s retrospective L’1%, c’est moi (“The 1% is me”), Fraser argues “it is indeed the money of the wealthy that drives art prices. This implies that we can expect art booms whenever income inequality rises quickly.” Fraser’s assertion that increased economic inequality stimulates and, in fact grows the art market points to a stark reality: without ARR, a career as an “artist” is only accessible to those who are already financially secure. Under these conditions, the sale of art works often becomes a way for the ultra-wealthy to accrue wealth, incentivizing the growth of the most inaccessible aspects of the creation and circulation of art.
This raises the question as to why resale rights have continuously been ignored in a number of countries where artistic production and output is quite high. It helps to look at the historical trajectory of ARR on a global scale.

In 1920, France enacted its own form of ARR law known as Droit de Suite, or “right to follow.” 97 years later, only a little over 70 countries have followed suit, with most ARR law stipulating that artists receive 3–7 percent of the total profit on the sale of their work. This means that if a work is originally bought for $500 and resold for $10,000, the artist is to receive 3–7 percent (depending on the country’s specific ARR law) of $9,500, while the remaining sum is distributed between auction houses, collectors, agents, galleries, and other players. Notably, the United States, Canada, China, Japan, and Switzerland have consistently rejected legislation that would allow artists to receive royalties or have a say in how their works are materially altered, physically exhibited, and publicly accessed. In countries without ARR law, economic inequality tends to be much higher than in those countries that have made use of ARR legislation. Notably, the entire EU adopted ARR law in 2001, with the UK following suit in 2006. Again, because the art market is contingent upon the presence of ultra-wealth, the decision by both the EU and the UK to pass ARR law indicates these countries’ commitment to reducing inequality. Perhaps unsurprisingly, major auction houses such as Christie’s, Sotheby’s, and Ebay have invested millions of dollars lobbying against ARR campaigns, which proves that these monolithic artistic institutions have chosen to heed to the needs of galleries and art dealers over the needs of the artists they represent.

American artists have taken up the fight for ARR law in a number of cases over the last few decades. In 1973, after his painting Thaw was resold at auction for a profit of $84,100, the artist Robert Rauschenberg attacked the art collector Robert Scull, yelling, “I’ve been working my ass off just for you to make that profit!” Two years earlier, artist Seth Siegelaub and lawyer Robert Projansky presciently drafted the the Artist’s Reserved Rights Transfer and Sale Agreement. The “Artist’s Contract,” as it came to be known, stipulated that the artist should receive 15 percent of the profit whenever their work is resold, and that they also always retain the power to choose the conditions of exhibition for their piece, even if it has been sold. Many artists, however, feared that collectors would refuse to purchase works that made use of the contract and the contract was never adopted into common practice. Rauschenberg continued his campaign for ARR law and teamed up with the artist James Rosenquist to help form the California’s Resale Royalty Act of 1976. The CRRA is a modest proposal that ensures a five percent royalty be paid to California artists when a work worth $1,000 or more is resold for a profit. In 2011, a California state court ruled the act unconstitutional. (Sotheby’s, Christie’s and Ebay are the three auction houses that lobbied to nullify the act.)

Those who argue against the institution of ARR law claim that resale royalties are not a sufficient way for artists to rent studio space, buy materials, afford healthcare, or even buy groceries—which, considering the small fraction of art profits that ARR represents, is true. Couple this with Donald Trump’s recent threats against the National Endowment for the Arts (NEA), one of the country’s chief sources of public arts funding, and one sees why a majority of working artists in the US have chosen freelance work to fund their artistic practice and living expenses.

Why, then, given that there is such little financial value in it, should artists fight for ARR law at all? It is less about resale rights as a matter of fairness to artists and more about what the implementation of ARR law ushers into the collective imagination. ARR law is a step towards a future in which artists can work and produce without the risk of financial insecurity. We see this idea at play in a number of other mediums, such as writing, where it is normal for authors to receive royalties on the sale of their books (even though this percentage is often criminally low). And authors certainly do not sell their manuscripts to publishers under the guise that the manuscript will be locked up and hidden away from both the public and the author so that it might “accrue value.” Similarly, few, if any, musicians make just one copy of an album and trust that the lone buyer will distribute it to the public. Of course, music and writing lend themselves to replication and distribution much more easily than fine art. Yet what is illuminated by this comparison is not the scarcity of fine art, but the economic value gained through its scarcity, and the lack of ARR law that allows this scarcity to be leveraged by the ‘major players’ of the art world.

ARR law is not a godsend that will end economic inequality in the art market, and it definitely will not, in itself, be sufficient means for struggling artists to make a living wage. Still, ARR law is worth fighting for. It is an incremental development towards a society that appreciates its artists as more than just producers of wealth. It is an attempt to acknowledge a fraction of the exponential rise in US inequality. ARR, through the assurance of resale royalties and a feeling of ownership over one’s work, has the potential to inspire burgeoning artists, for whom creating work might be either daunting or impossible.

JACK MANOOGIAN B’18 would make more art if he didn’t feel so guilty about the economy.