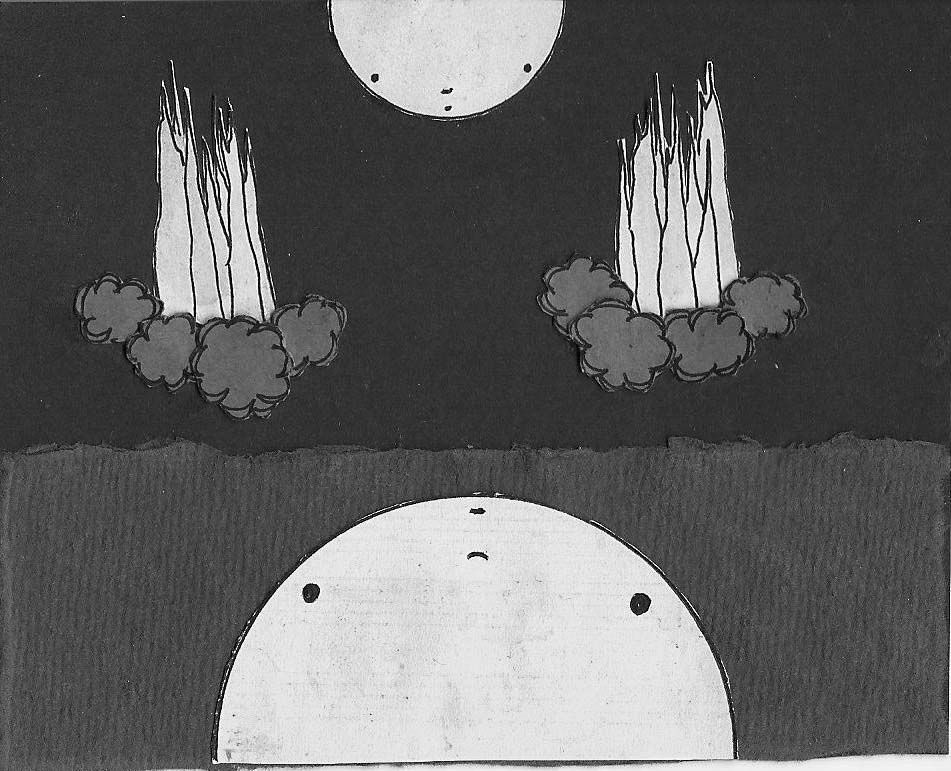 he’s thin and gangly and kind of scruffy. oh, and he’s an anarchist which, of course, is a total plus.

it’s really just beginning, though, and i’m not sure how he feels, but i hear he likes me, but i don’t want to jinx it, so i won’t talk too much about it.

but it’s just so-

There’s a delightful tension in mystic Christian literature between the desire to be Christ and the desire to be with him. Christian mystical experience is rarely all unitive or all relational. More often than not, it’s somewhere in between. This tension plays out in the Gospel of Thomas, an apocryphal collection of 114 Jesus-sayings from the first few centuries of the Common Era. Though Thomas is a compilation of seemingly disparate oral traditions, certain clues throughout the text reveal that its thirdor fourth-century editor had some cohesive principle, a consistent mystical framework, tying it all together. The text begins:

“These are the secret words that the living Jesus spoke, and that Didymos Judas Thomas wrote down. And he said, ‘Whoever finds the meaning of these words will not die.’”

“Didymos” and “Thomas” mean “twin” in Greek and Aramaic, respectively. A clue hides behind layers of dead languages, but, once uncovered, it unlocks much of the text. We’re not supposed to believe for a moment that someone named Twin Jew Twin wrote Thomas. This incipit is the innovation of a clever editor, a clue to the readers that Thomas’s mystical framework has something to do with twinning and mimesis. But to whom is Didymos Judas Thomas a twin? Clues scattered throughout Thomas point us towards the answer, but nowhere is it more clearly stated than in Saying 108:

“Jesus said, ‘Whoever drinks from my mouth will become as I am; I myself will become that person, and what is hidden will be revealed to him.’”

Drinking from Jesus’s mouth is a relational mystical process: there is a distinct subject and object which enter into a relationship. The reader comes into Jesus’s presence and is with him. Through this relational process, however, the reader has a unitive mystical experience: the lines of identity between the reader and Jesus are not just blurred; they completely disappear. The reader becomes like Jesus, Jesus actually becomes the reader, and secret knowledge about the nature of reality is unfolded to him. A fundamental paradox underlies Saying 108: how can the reader be Jesus and be with Jesus at the same time? Philosophers may scratch their head and parse it out into a rigid philosophical “framework.” But mystics are not philosphers. Their logic does not have to be sound, their language need not be consistent. The language of the mystic is evocative, not necessarily descriptive.

i’ve been writing your name in my journal with little hearts around it.

you’re in my dreams, too.

a grey, muggy day. we walk out to the river on the edge of town.

we take each other’s sandals off and skinny dip in cool water.

the clouds part. a dove flies between us.

What does it mean to drink from Jesus’s mouth? Metaphorically, to drink from Jesus’s mouth is to hear and internalize every word of his teachings. The meaning is so transparent that we almost ignore the shocking image used to convey it. We are invited to imagine our own lips pressed up against Jesus’s lips. Yes, we’re making out with Jesus. All of us: women and men alike. The eroticism of Thomas is hardly unique and actually quite tame compared to other texts in the Christian mystical tradition. Women and men have recounted mystical meetings with Christ and God in erotic language for nearly all of Christianity’s two thousand year history. Female virgins seem to have had no problem conceiving of their relationships with Christ in sexual and romantic language (consider the angel penetrating St. Teresa of Ávila with a fiery arrow of God’s love). Likewise, Christian men unashamedly wrote about sexy encounters with Christ or the masculine God. Perhaps the most famous of these accounts is St. John of the Cross’s 16th-century Spanish poem, “La Noche Oscura del Alma” (Dark Night of the Soul). In it, St. John imagines his soul climbing down a secret ladder and sneaking out of a sleeping household to cross a dark night into the caresses of a beloved male God:

“Upon my flowery breast, / Kept wholly for himself alone, / There he stayed sleeping, and I caressed him, / And the fanning of the cedars made a breeze. // The breeze blew from the turret / As I parted his locks; / With his gentle hand he wounded my neck / And caused all my senses to be suspended.”

Orthodox apologists for St. John will point out that he writes from the point of view of his soul, which in Spanish is grammatically feminine (alma), but such authorial cross-dressing only makes it queerer.

sustaining each other on more than just bread.

until finally we reach the park, children’s birthday parties all around;

there you are at the top of a hill, speaking loudly over the noise. loud but gentle.

your words are song and you sing onto my heart.

the song is about love, but it isn’t a love song.

“come up to the hilltop,” you say.

did you reach your hand for mine or did i reach for yours?

“but now this is just a mountain for us. look.”

a single cloud floats by lazily.

We don’t need Georges Bataille to tell us that mysticism and eroticism go hand-in-hand. But Christian mysticism and homoeroticism may be a little more surprising given the centuries of homophobia in institutional Christianity and Western culture. And yet, it makes perfect sense, for it plays into the wonderful tension between uniting with Christ and relating to Christ. It allows the mystic to both be Christ and to be with him. The male mystic seeks the love of the male Christ. The two distinct entities meet in an intimate embrace. Two male bodies come together, at once distinct, but at the same time similar.

There is, after all, a two thousand year tradition of imitating Christ. The idea of imitatio Christi is not limited to mystic Christianity. It takes many forms and occurs at various levels. Martyrs took imitatio to its literal and extreme end through willing, stoic suffering. For St. Augustine, imitatio was about living a humble life in imitation of “the lowly God.” St. Francis of Assisi followed Christ’s model of radical simplicity and humility so faithfully that he received stigmata, the five wounds of Christ’s passion on his own body. Thomas á Kempis understood imitatio as an internal exercise practiced in the spiritual inner-mind.

we get a drink. red wine. one glass is enough.

let’s drink it together. to the last drop.

we stay up all night.

i want to be with you,

i want to be through you,

i want to be in you,

i want you to be with me, through me,

i’m not really into bondage, but i’m down with domination.

then you’ll deny it, of course, and call me king instead.

then i’ll deny it.

then finally we get naked and sweaty.

limbs in all directions.

and this is just the foreplay.

i want to nail you and i want you to nail me.

for hours on end and then you’ll say, “why have you left me?”

and then we’ll finish and so we’ll both die at the same time for each other and for everything.

one of us will tear the sheet. the sun will set and we’ll sleep til three pm.

There can be something very queer when we consider imitatio Christi in the context of relational mysticism. The mystic yearns for the embraces of a man, while simultaneously imitating him to the best of his ability. He has a big fat gay crush on Jesus. I think of my own crushes, the most consuming ones. They fill me with the same tension that runs through Christian mysticism. I want to be with the object of my desire, but, to a certain degree, I also want to be my crush. We all take or borrow the hobbies and tastes of our crushes because we think it will make us more like them, and, in turn, make them like us more. It can be hard, however, to draw the line between courtship and imitation. The line is even blurrier when the crusher and crush have anatomy and gender in common.

The gay crush is both a mirror and a magnifying glass. Sameness makes me scrutinize the differences all the more. How often does he go to the gym and what does he lift? I’ll lift that. Does he have less chest hair than I do? I’ll trim it. These worries can be debilitating and embarrassing. Through a strange paradox, the relative similarity of body type and gender presentation makes it easier to look at our crushes as wholly other, as gods, worthy of imitation. Though my crush may have “divine” abs and an “otherworldly” smile, I can’t actually look at him as a god. This is where similarities between gay crushes and male mystics’ love for Jesus end. Crushes are real people. Imitation blurs identity. Christ is an archetype. When we conceive of him as a real human, we project personal interpretations on our understanding of him and construct our own image, our own version of Christ.

where did i lose you?

and i didn’t even ask for your number.

Christ is equally human and divine in most orthodox theologies. His dual nature is precisely what makes mystical musing so exhilarating; this doctrinal tenet is precisely what causes the tension we’ve seen in Christian mysticism between union and communion, imitation and relation. The mystic aspires to unite and commune with Christ’s divinity. But divinity is an abstract concept. Jesus is a literal, human model of the perfect man. The mystic can imitate Jesus’s example of perfection as laid out in the Gospels as a way to attain divinity; he may identify as Jesus and read the Gospels as his own autobiography. But the humanity of Jesus also allows the mystic to conceive of divine communion erotically: divinity can be passed through kisses, caresses, penetrations.

I don’t mean to suggest for a moment that Christian male mysticism is inherently gay. Rather, I think the eroticism of Christian mysticism provides gay men a unique way of considering and reclaiming both sexuality and spirituality. For centuries institutionalized Christian doctrine has done a good job estranging “unrepentant” queer folk from their spirituality by denying them their sexuality. At the same time that institutions condemned homosexuality, they embraced homoeroticism directed toward Jesus, creating a fundamental disconnect between queer sexuality and queer spirituality. Now, as the religious landscape continues to change, as Pope Francis keeps surprising us with his comments on homosexuality, I can’t help but see a perfect opportunity for the merging of these two fields. If a male mystic writes about kissing Christ, it should not be scandalous if he wants to kiss other men.

and on the third day dorothy woke up

and ascended to kansas.

but i’ve never been so alone.

i biked north to the cemetery

to sit by the riverside.

a stranger asked me if i was looking for someone, for a grave,

i shrugged and looked back down at the water.