Not much to see, but what you hear makes up for it 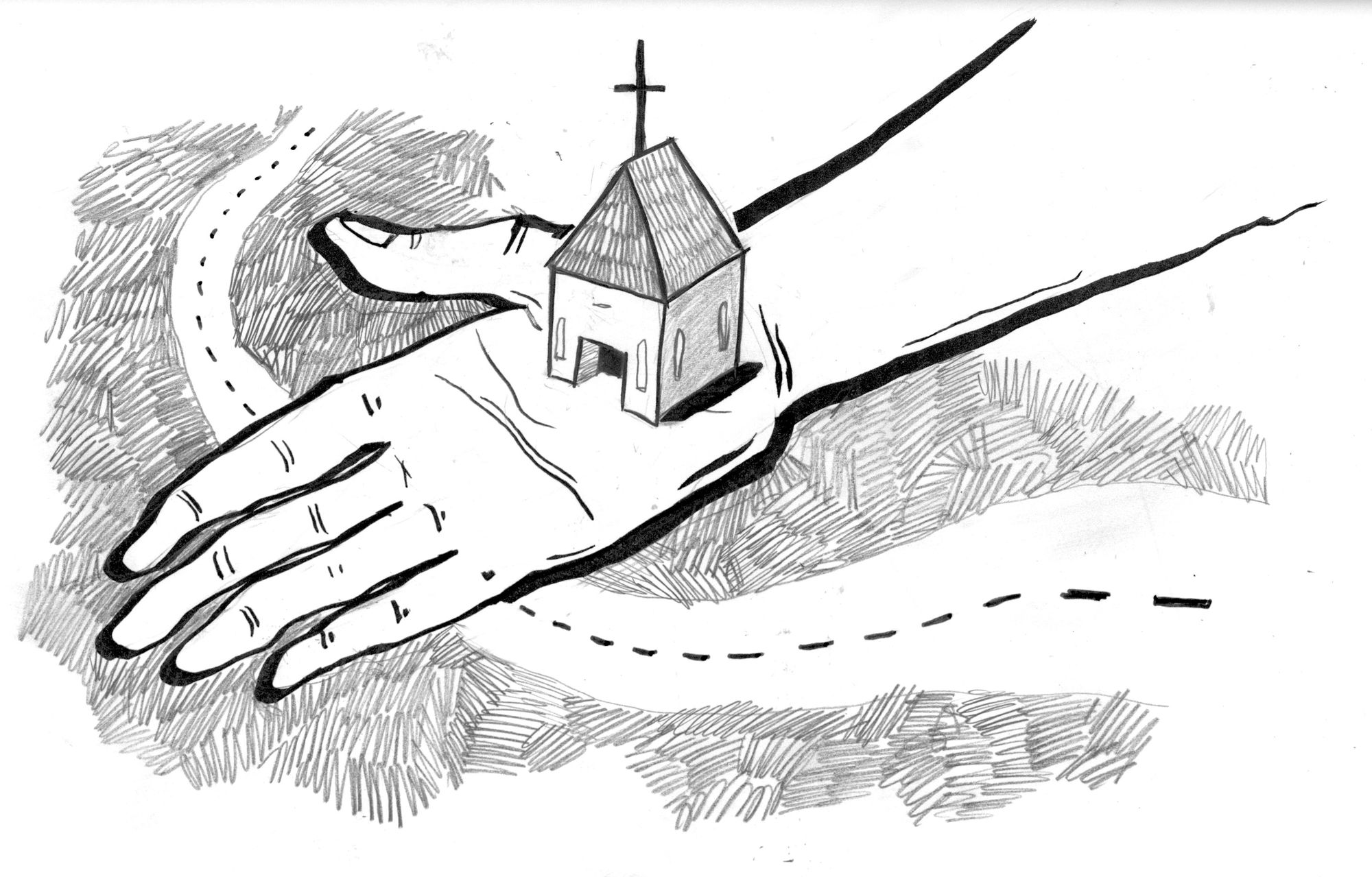 The sky over Downtown Escanaba is the same color as the sidewalk: a perfect match, so that whether you walk with your head hung low or your chest lifted, the grainy grey floods your vision.

It’s early, 7AM on a Thursday and most of the town in the upper peninsula of Michigan is still asleep. The bank hasn’t opened yet. The funeral home’s shades are drawn. City Hall is empty. There is a warm orange glow from the church windows, but no other indication that someone is inside.

My Grandma finds the silence uncomfortable. She fills our steps with muddled stories of coal shootin’ Annie, a woman who—from what I have surmised—is a retired coal miner with bad personal hygiene, and stealin’ Diane, who stuffs scones from the church into her purse every Sunday.

Grandma was born in the neighboring town of Gladstone, Michigan and like many residents, never wandered far. Grandma used to walk five miles a day, but now at 86, she’s whittled it down to three miles (except on Sundays, when she attends mass). Past Downtown, which is really one long street and several cramped diners, we enter the backcountry. Here, frozen red blueberry bushes circle towering evergreens. Grandma tells me about a neighbor named Irving Houle whom everyone called Francis. I’m listening with one ear, the other busy trying to trace the origin of a rustling tree or shrub or just a general direction.

“Irving received the stigmata at 67 and experienced the passion of Christ every night.”

“Wait, what did you just say?”

When we return home, I Google Irving Houle. The first result is a website titled “Mystics of the Church,” that contains excerpts from the book A Man Called Francis written by Father Robert J. Fox, Houle’s spiritual counselor. Over half the page is comments from people sharing stories of Houle’s humility and healing power.

Stigmata is the Catholic term that describes lesions or pain in locations that correspond to the crucifixion wounds of Jesus. These wounds can be visible or invisible, permanent, periodic or temporary, and usually appear on the hands, feet, and forehead. A Greek term that translates to “mark” or “tattoo,” stigmata was first referenced in Saint Paul’s “Letter to the Galatians” in which he wrote, “I bear on my body the marks of Jesus.”

Since Saint Paul’s first expression of the condition, hundreds of people have claimed to be stigmatics. While a reliable list does not exist, the Catholic Encyclopedia compiled an unofficial roster of 300 names. Approximately 30 of those listed are still alive.

By the time Grandma yells, “dinner is ready,” I’ve been on the computer two hours. I try to pry more information from Grandma over beef stroganoff and apple juice, but it’s clear she doesn’t want to engage. She steers the conversation toward the looming storm and how I’m in dire need of a haircut.

After dinner I’m back on the web, on the hunt for answers. While the Catholic Church does not recognize every instance of stigmatism, it has affirmed its occurrence as a supernatural element of suffering for Jesus. According to the Catholic Education Resource Center, an online library for Catholic culture and faith, “the Church strives to first ascertain that the origin is not of natural causes, and looks for supernatural evidence to prove that the stigmata is truly a sign from God.”

True stigmatics will bear wounds that bleed more profusely on Holy days and during Lent. The blood flow will not clot or produce infection. Their wounds will be untreatable and appear suddenly, usually on a religious day and almost always on devout practitioners.

If you present as a genuine stigmatic, the Church will beatify and canonize you, maybe. St. Padre Pio of Pietrelcina (1887-1968) is the most recent stigmatic to be officially recognized by the Church. Pope John Paul II sanctified Padre Pio in 2002. Records reveal that several 20th century physicians studied Padre Pio’s wounds but made no formal diagnosis.

I find Irving Houle’s normalcy painstakingly annoying. He lived his whole life in Escanaba, embodying it to the point that he became a projection of it; camouflage against Catholic churches and mom-and-pop businesses that still tinker along roadsides.

After graduating from St. Joseph’s High School in 1944, Houle entered the army. He served two years before being honorably discharged in 1946. He worked at Escanaba’s leading employer, the water and oil pump manufacturer, Engineered Machine Products. He married Gail LaChapelle at St. Joseph’s Church in 1948 and raised five children with her. All normal for a Catholic raised in the Upper Peninsula.

Soon, I become obsessive: I’m up late eating cold stroganoff and reading about his childhood, which seems equally ordinary except for an incident that took place when he was six years old. Houle fell off a work horse onto a railroad tie, breaking three ribs and puncturing a lung. The doctor could not operate that night because of Houle’s severe hemorrhaging. The next morning the medical staff crowded Houle’s bed, amazed that his ribs were no longer puncturing the lung; the bleeding had stopped completely. Young Houle would later tell his mother that a glowing man stood over his bed all night at the hospital. Years later Father Fox explained, “it must have been Jesus.”

Growing up, Houle sat through long Church services every Sunday and stayed after to recite the stations of the cross: three Our Fathers and three Hail Mary’s at each station. His faith followed him into adulthood; he attended daily mass at St. Joseph’s and made the stations of the cross afterward. Elmie Dombrowski, Houle’s neighbor, told the Diocese of Marquette Newsletter that the Houles’ “were just an ordinary family, hard working and good people.” She recalled, “You’d see [Houle] in church all the time. I was sort of surprised when this happened to him, but why not him?”

Houle didn’t seem to have an answer to this question either. In 1993, Jesus appeared to Houle during Lent at age 67. Houle recalls seeing blood pour profusely from Jesus’ hands; “I was sure that there would be blood on the floor, but there was not.” On Good Friday, Houle planned to stay at St. Joseph’s until midnight, but around 10:30PM sharp pains surged through his hands and he headed home.

According to A Man Called Francis, Houle returned home that night and awoke the next morning with large red circles on his hands. From that day forward, his wounds bled every Friday, and moreso during Lent. In addition to his painful marks, Houle suffered the “passion of Christ” every night, what Father Fox describes as an embodiment of the crowning of thorns with intense moaning and pain accompanied by flailing arms. When Father Fox asked Houle if he experienced pain in his hands constantly, Houle replied, “No I don’t, but I feel my heartbeat in them all of the time. After midnight, that is when the pain starts. My side, my whole upper body pains; my head—just like someone clapped those thorns on my head... my whole upper body feels like it is being ripped apart and then my hands. Oh! My hands, Father. At times it is unbearable.”

I have a dream about Irving Houle. We sit in my Grandmother’s kitchen as I ask him questions that he won’t answer. I want to know what he sees when he experiences the passion of Christ each night. I want to know if he has any other medical conditions that could explain his wounds. He keeps saying, “I will not speak about my suffering.” I grow incredibly frustrated.

Stigmata is a physical phenomenon. If you believe in it, it is a manifestation of faith. If you don’t believe in it, it could mean something else entirely. The main non-faith based explanations seem to link it to “hysteria.”

What does it say about faith if the stigmata are self-inflicted? Is it a form of piety? A symptom of mental illness? Whether it is supernatural or manmade, it is still inflicted onto the corporeal, earthly, mortal form in the name of some higher, spiritual power.

Houle told Father Fox, “Jesus did not tell me to speak, he simply said touch my people,” and Houle is said to have touched over 200,000 people at his healing services, long ceremonies that occur after mass. Once word of Houle’s stigmata spread, people travelled across the country to receive his prayers. YouTube clips show Houle placing scarred hands on wet-eyed believers, pulling them close, and whispering prayers to himself. I read a description of a woman who claims she was “slain in the spirit,” as Houle prayed over her, fainting immediately at his touch.

The people of Escanaba refer to him as Francis, after Saint Francis of Assisi, the first recorded person in Christian history to suffer from stigmata.

I enjoy reading testimonies from people Houle healed. I find it oddly comforting. Terry Saunders, a state trooper with stage four lung cancer, recovered miraculously after praying with Houle for a month. Saunders told Our Sunday Visitor, a Roman Catholic newsletter, “every time Irving would see me, he would greet me and put his arm around me and his hand on my chest. Every time he did that, bolts of white heat would course through my chest. I could feel it immediately.” Many testimonies were people from Escanaba who wrote that Houle had healed their ailment, revived their faith, and brought them back to the Church.

On Sunday, Grandma asks if I’ll go to Church with her. She never pressures me, but the guilt looms like a raincloud every time I politely decline. This Sunday I accept. We sit in the back pew. I wonder how many of Houle’s healing services took place after this mass? How many in the room had received his blessing?

When Houle passed away in 2009 after months of failing health, the Church released an article describing a wake that lasted over four hours. People across the Upper Peninsula packed inside the church to pray with Irving one last time.

On the drive home I ask Grandma if she believes Houle was a true stigmatic. She pauses, “I don’t know, but if he was or wasn’t, he sure offered the people of this town some comfort, some hope, and who am I to judge that.”

Who am I to judge that?

I awake before the sun to get a head-start on the eight hour drive ahead of me. I pack up my belongings in a daze and hug my grandmother goodbye as she hands me a large Tupperware of stroganoff.

Driving out of Escanaba, the trees look tall and winsome against the rising sun. I pass St. Joseph’s one last time, the palatial Roman columns, the well-groomed shrubs, the warm orange glow from the window, a peaceful parish.