Shakespeare (In the City)

How theater is bringing Providence schools together 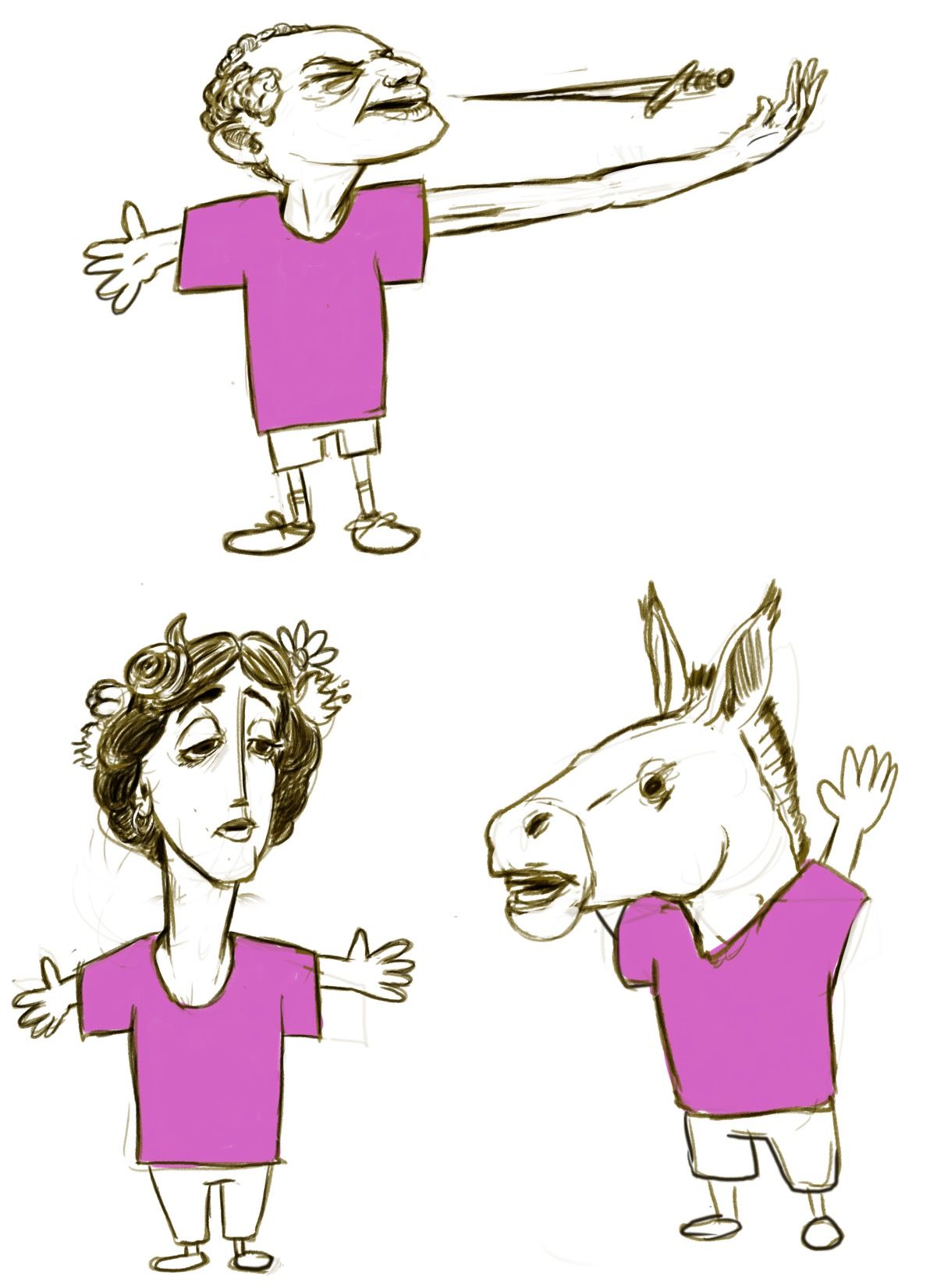 In 2008, Martha Douglas-Osmundson and her 14-year-old daughter traveled to London, excited to immerse themselves in London’s theater scene. They watched plays such as The Lion King and Wicked, completing their foray at Shakespeare’s Globe. To their surprise, the production of Hamlet that ran during their visit happened to be part of the Globe’s “Our Theatre” program, which brought together 450 students from Southwark, a diverse London borough, to stage the play. Douglas-Osmundson, known affectionately as Mrs. D-O, became entranced by seeing thirty kindergarteners recite Hamlet’s “to be or not to be” soliloquy and non-verbal students in wheelchairs acting to their fullest capacities—ultimately, a major pushback against what Shakespeare has become in the educational canon. Douglas-Osmundson stated in an interview, “I saw Shakespeare completely free from pretension for the first time,” performed in its most human form. “I want to make that happen,” she said to herself that day, burning with a desire to somehow start the program back in Providence, where she taught at the independent, all-girls Lincoln School. Shakespeare in the City was conceived.

Mrs. D-O handwrote 82 letters to every principal in Providence, but not a single person responded. However, one principal at Roger Williams Middle School pinned the letter to a bulletin board, which was chanced upon by Kaydi McQuade, the school’s theater teacher. McQuade immediately responded to Douglas-Osmundson, which lent Douglas-Osmundson the courage to cold call the other independent schools in Providence. Eventually, 10 schools coalesced to perform Hamlet in May 2009, the first iteration of Shakespeare in the City. Opening with the soft acoustics of “Behind Blue Eyes” by The Who, the arts-oriented School One opened the play with Barnardo’s frightened “who’s there?” For Douglas-Osmundson, that moment, as well as the student sitting next to her exclaiming “Mrs. D-O, this is so good,” solidified Shakespeare in the City as a program worth continuing. Now, Shakespeare in the City features 24 schools, and even has a waitlist of schools seeking to join.

This year’s production is Macbeth.

Kaydi McQuade served as a theater teacher from 2006-2013 at Roger Williams Middle School, a state “intervention” school (a school targeted by Rhode Island for improval) that scored in the lowest five percent of schools in the state. McQuade became amazed at the capabilities of her actors, stating that “my students were able to find their voices in Shakespeare’s 400-year-old plays, even though they were nothing like his characters.” She praised the collaborative nature of Shakespeare in the City, both on an interschool and intraschool level, a stark contrast from what she described as the “siloed” nature of public middle school education. For McQuade, Shakespeare in the City not only brought together her predominantly low income, Latinx students with the Bard himself, but also united seemingly disparate students from across Providence, traversing racial, economic, and geographical lines.

McQuade recalled a student who played the donkey-headed, slapstick Nick Bottom in A Midsummer Night’s Dream one year, and a Macbeth contemplating killing the king the next year. “I went to his graduation and cried,” McQuade told me, citing Shakespeare in the City as crucial in building his confidence and public speaking skills. Another one of her students started with a minor role, playing an auxiliary flute player in Hamlet, and the next year furiously vowed to kill Othello as the antagonist Iago. McQuade said that she “could hear a pin drop” in the audience during the soliloquy. After she finished, the audience roared in thunderous applause.

The types of schools that participate in Shakespeare in the City range from private to public, from elementary to high school, and engage with students of all levels of ability. This intermingling of schools is the result of a very deliberate effort by Douglas-Osmundson, to create, in her words, “a cast that looks like Providence.”  The unique personalities of each school wonderfully come to the fore throughout the cosmopolitan productions. Year after year, Meeting Street School second graders ace the opening monologue. Rhode Island School for the Deaf students act combat scenes with abandon, and one year performed Hamlet’s death scene, signing Hamlet’s dying words: “The rest is silence.”  The acting of the Rhode Island School for the Deaf was so moving, it pushed one three-year Shakespeare in the City veteran to pursue the theater of the deaf as a career.

Shakespeare in the City turns traditional Shakespearean acting on its head: because of a limited amount of roles, students not only double up on parts, but often perform the same character’s lines in groups of ten or more. A scene could see numerous Romeos break up the line, “But soft, what light through yonder window breaks” into “but soft,” “what light,” “through yonder,” and “window breaks.” The schools, when performing in tandem, create a kaleidoscope of theatricality. McQuade emphasizes this collaboration, telling me that “through Shakespeare in the City, I found a place where kids are learning from each other,” and it is through this creative exchange that Shakespeare in the City continues to better itself year after year.

Last summer, Anna Steinberg B’19—who performed in Shakespeare in the City’s first iteration—and Alex Daigle B’19 decided to create a full-length documentary about the program. Steinberg is currently producing and editing the film, while Daigle is focusing on coordinating the logistics of its production—together, they form a formidable pair.

Steinberg remembers playing Puck in A Midsummer Night’s Dream, recalling her glorious entrance into the theater: “While an ’80s song played, all of us Pucks—there were a lot of us—entered through the back of the packed Lincoln School theater. Everyone turned to look at our tiny selves and the stereo we carried blasting the music. I just remember thinking that I could be super self-conscious and embarrassed of myself, or just skip in and be Puck.”

Both Steinberg and Daigle are using the documentary to convey their immense appreciation towards how the program transformed (and will continue to transform) students. Steinberg explained that “Shakespeare in the City goes beyond Shakespeare. It ends up being about Providence, about community, about potential for kids, about exploring things outside of your comfort zone. It changes people, and builds confidence. It does stick with you.” Daigle firmly believed that the program “was really necessary to have for the kids … it’s changed so many people’s lives.” The two could not be a better duo to bring forth both the joy of Shakespeare and the bridging force his plays create, bringing “the City” together.

When I asked Martha, broadly, “why Shakespeare?” she responded: “Shakespeare was all about human emotions. And so are these kids.” She firmly believes that “if the students could perform Shakespeare in front of this crowd, they could do anything,” and when asked to sum up the Shakespeare in the City experience, she replied, “it’s magic.” To McQuade, performing Shakespeare (“whose plays were never intended to live on as written documents”) allows students to comprehensively inhabit their roles and understand the musing of the Bard, as well as be empowered to explore their own forms of expression. Shakespeare in the City serves as not only an enrichment program, but as a door to a general passion for arts, theatrical or otherwise.

There is only one full rehearsal before the actual performance, where the hundreds of student performers meet each other, many for the first time. During this rehearsal, Brown students visit the program to workshop acting techniques with students. The students also get a chance to interact with others beyond their schools, through icebreakers, such as meeting “knee” and “elbow” partners (essentially bumping knees and elbows with strangers), and offering each other encouragement before the show.

This year’s production of Macbeth will occur at the Veterans Memorial Theater (the Vets) on May 16, at 6PM. The show will feature 24 schools in the beautiful and imposing architecture of the 2,000 seat theater, complete with high domes and Baroque ornamentation. The intense amount of preparation in stuffy English classrooms will inevitably become vibrantly manifested in a theater fit for philharmonics. McQuade sums up the typical first reaction of students as “whoa.”

After each school performs its scene, the actors head down what has been known as the “squeeze stairwell” to get to their seating. The squeeze stairwell name is exactly what it suggests: a visceral squeezing out of the mounds of adrenal energy left over from the performance. The kids, according to McQuade, scream “Keeeek!” and jump up and down, hugging their fellow performers. After all remaining energy has been let go, the actors sit back down in the balcony of the theater, cheering on the rest of the schools.

KION YOU B’20 invites you to see the Shakespeare in the City perform Macbeth at the Veterans Memorial Theater on May 16.