Imagining a future for the unclaimed dead on Hart Island 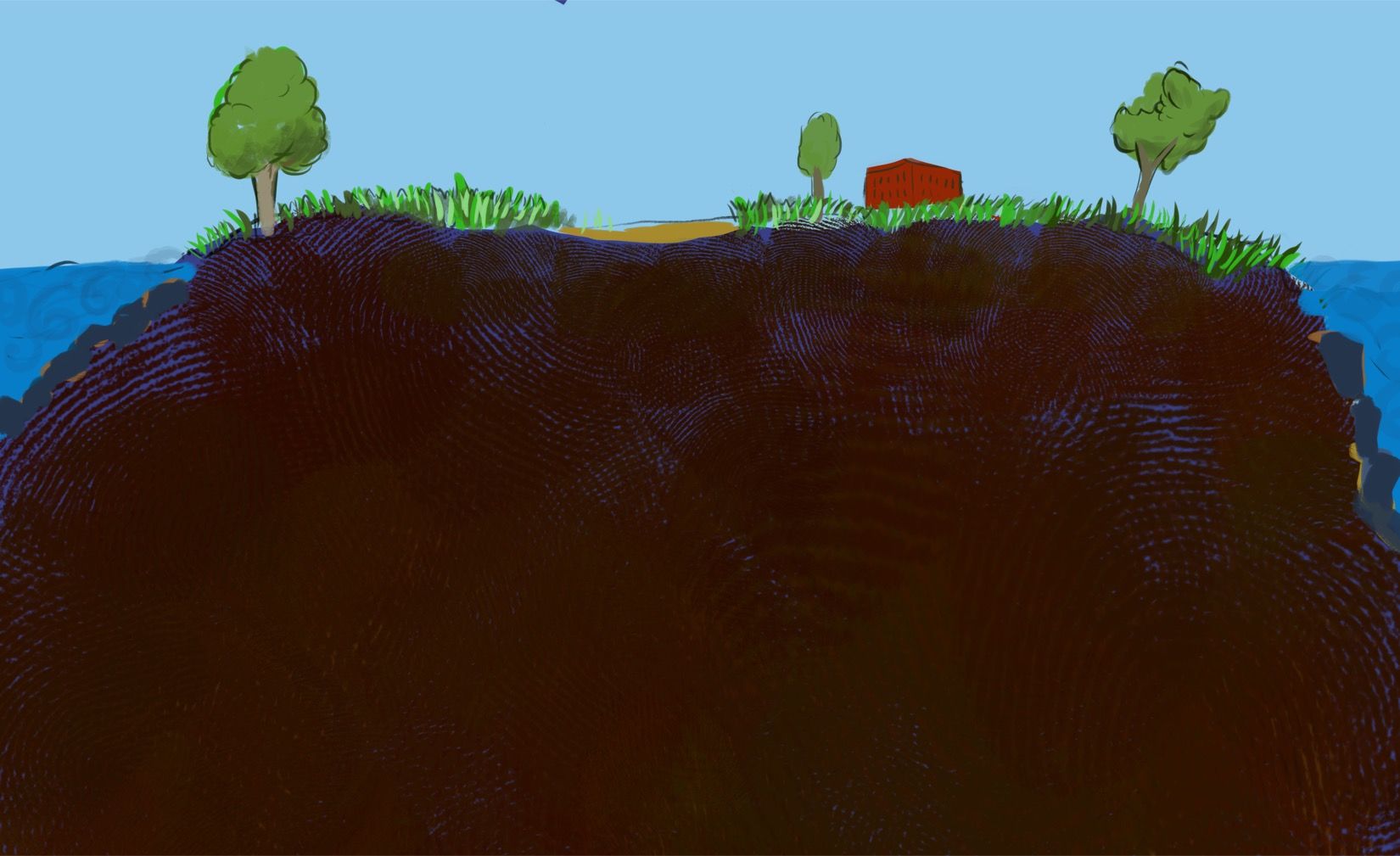 On March 31, New York City Mayor Bill de Blasio backed a ten year plan to close Rikers Island, the city’s prison infamously known for its brutal treatment of inmates, with hundreds requiring hospitalization each year. The torturous conditions are only exacerbated by the island’s physical inaccessibility and the bureaucratic slush that prevents inmates from filing complaints—nearly 70 percent of whom have yet to receive sentencing. The closure of Rikers is largely symbolic: the inmates will be transferred to other prisons in the New York area, and ending the explicit brutalization of incarcerated people at this site does little to account for the structural violences enacted by incarceration in the first place.

But Rikers’ closure also has implications across the city. For Hart Island, the New York’s mass grave for unclaimed bodies less than 5,000 feet southeast of the Bronx’s Pelham Bay, burial labor is currently performed exclusively by Rikers’ inmates. It is the only cemetery in the world operated by a prison.

With growing support from abolitionist groups and the New York Civil Liberties Union (NYCLU), advocacy efforts are shifting toward an alternative future for the cemetery. In 2012, Bill #0134 was introduced to the New York City Council by member Elizabeth Crowley (D-30) to petition for a jurisdictional transfer of Hart Island from the Department of Correction (DOC) to the Department of Parks and Recreation (DPR). At a public hearing for the bill after its reintroduction in 2016, Mark Levine (D-7) argued that transferring oversight to the DPR would make public visitation possible “to pay respects to the one million people who are buried there. People who reflect the history of New York City from how we’ve dealt with contagious disease, how we dealt with our war dead, the history of poverty over two centuries, the AIDS epidemic, the modern homeless crisis.”

The remaining structures on the island—a former infirmary, a workhouse for boys, and a rehabilitation facility—are in desperate need of preservation, which proponents of the bill believe should be completed under the purview of the DPR.

Purchased by the DOC for $75,000 in 1868, the 0.2 square mile island was first established as a juvenile workhouse for boys. Before its purchase, the island functioned as a prisoner-of-war camp for Confederate soldiers during the Civil War, and since then, has operated as a quarantine site following the yellow fever outbreak of 1870, a women’s psychiatric hospital in the 1880s, and a storage site for missiles for the military’s Project Nike during the Cold War.

Louisa Van Slyke, a 24-year-old woman who died alone at Charity Hospital in 1869, was the first recorded burial on the island. As the largest tax-funded cemetery in the world, Hart Island functions as the City’s major potter’s field, providing burial for some of New York’s most marginalized: primarily, bodies that remain unclaimed or unidentified.

Keeping expenditures to a minimum, bodies buried here are not embalmed in any way and are placed in simple pine coffins. Though many states require that individual coffins be encased in cement, the coffins on Hart Island are instead grouped by the thousand and stacked in a series of trenches across the acreage. Because of this bare-bones burial method, bodily remains decompose every 25–50 years, and trenches are frequently refilled. A catalogue system introduced in the late 19th century groups coffins by age in separate trenches, and each coffin is now labeled with an identification number to facilitate the reinterment process for those claimed post-burial.

In 2008, the Hart Island Project, a charity headed by artist Melinda Hunt, filed a series of Freedom of Information Act requests from the DOC. With support from the NYCLU, the advocacy efforts required that the DOC make burial records and the procedure for survivors of the interred to request for a private re-burial public. In 1977, nearly two decades of burial records for the island were destroyed in a fire, and despite numerous gaps in the archive since, available records suggest that more than 68,000 people have been buried since 1980.

After the original purchase by the DOC, the potter’s field was first serviced by prisoners on what is now Roosevelt Island. When that prison was demolished in 1936, the DOC transferred the burial labor to the incarcerated people at Rikers, who still are responsible for the gravedigging and burial procedures to the current day. Paid a paltry 50 cents an hour, inmates are ferried to Hart Island most weekdays to tend to the grounds and inter upward of three thousand bodies per year. Rikers inmate Michael A. Roman said of Hart Island in April 1992, “an island of those poor unfortunate souls buried here in the unknown to others. If only I had the power to help this lost island.”

Often referred to as the ‘City Cemetery,’ body disposal on Hart Island is dictated by the city’s Office of the Chief Medical Examiner. Though most bodies buried on the island are now identified, uninsured and underinsured people who cannot afford private burial or whose surviving family cannot provide arrangements are offered the option of “City Burial.” Rhetorically obfuscated by this seemingly routine option, Hart Island is anything but standard.

After the DOC made their interment records public, the Hart Island Project developed a digital, interactive archive of the people buried there. The homepage for the Project’s website serves—with an endless scroll function—as a series of identification cards for the Hart Island dead. Each card lists all publicly-available information: age of death, burial date, location of the plot on the island, and sometimes, additions from visitors to the website who knew the deceased. Each name is attached to a clock that tracks the length of “anonymity” for the unclaimed bodies; the clock stops only when the body is exhumed or identified digitally by a loved one.

Leo (Ramon) Summers died on April 1, 1985 at age 59 at the VA and was buried in plot 168 one year and 15 days later (a stipulation in New York state law offers any unclaimed bodies for scientific research and medical education for a year or more before ‘proper’ burial). On the Project’s website, Jamison Graff offers in December 2016 that Leo was an award-winning sci-fi illustrator in the 60s for the serial Amazing Science Fiction Stories novel, among other published works. For an infant with the surname Bermeo who died in August 2000 and was buried two months later, Estrella Quizhpi writes in February 2017, “Mi angelito, nunca te he olvidado todos los días te tengo presente en mi corazón.” Estrella attached a number of photos of the baby’s siblings and relatives, and the message ends, “te amo mi niña por siempre.”

Others on the site have yet to be identified by loved ones: Larrier Budelo, who died at Sloan Kettering in April 1982 (age unknown), was buried a month later and has not yet been found through the Project’s site. Of Jose Rodriguez (1958-2015), Carola Martinez writes in September 2016, “while we were not able to physically say goodbye, he will forever remain loved and remembered by his family.”

Efforts by the NYCLU and the Hart Island Project have offered a potential for reburial for many, like Gladys Van Aelst, who died in 2014 at the age of 85 and was reinterred a year later. For others, the Project is an opportunity to render visible the deceased most obscured by the state, even if the physical remains stay stacked in the island’s trench system.

In 2015, the NYCLU filed a class-action lawsuit against the DOC to grant families of the deceased access to the grounds. On July 19 that year, 50 family members who petitioned the department for visitation were transported by ferry for the first-ever public visit. For one weekend day each month since, visitors are shepherded onto the island; this January, the program was expanded to accommodate 70 visitors at a time and to include new permissions allowing family to photograph the grounds. The surface of the island is quite bare: aerial footage of the island shows large, grassy spaces, save a few decommissioned buildings. Except for the individual grave of the first child to die of AIDS in New York, no markers reveal the island for what it is.

Transferring oversight to the DPR would place Hart Island in a long linage of New York potter’s-fields-turned-public-park. Among the former mass graves are the heavily foot trafficked Madison Square Park, Washington Square Park, Union Square, and Bryant Park. This year, the city’s Historic Districts Council named Hart Island as one of their annual Six to Celebrate—an initiative to highlight neighborhoods in need of preservation.

If Hart is taken over by the DPR, proponents of the bill argue the island’s structures would be better prioritized for preservation efforts and access to the island would significantly increase. In collaboration with the Hart Island Project, environmental architects propose the island as a site for eco-burial practices that would reduce the physical labor required of the current interment methods used (at the cost of losing the potential for re-interment), while addressing the spatial limitations that make traditional burial methods unsustainable in the city. Transfer to the DPR opens the possibility for a new public memory for the centuries of life hidden beneath the soil.

DOLMA OMBADYKOW B’17 will keep digging.