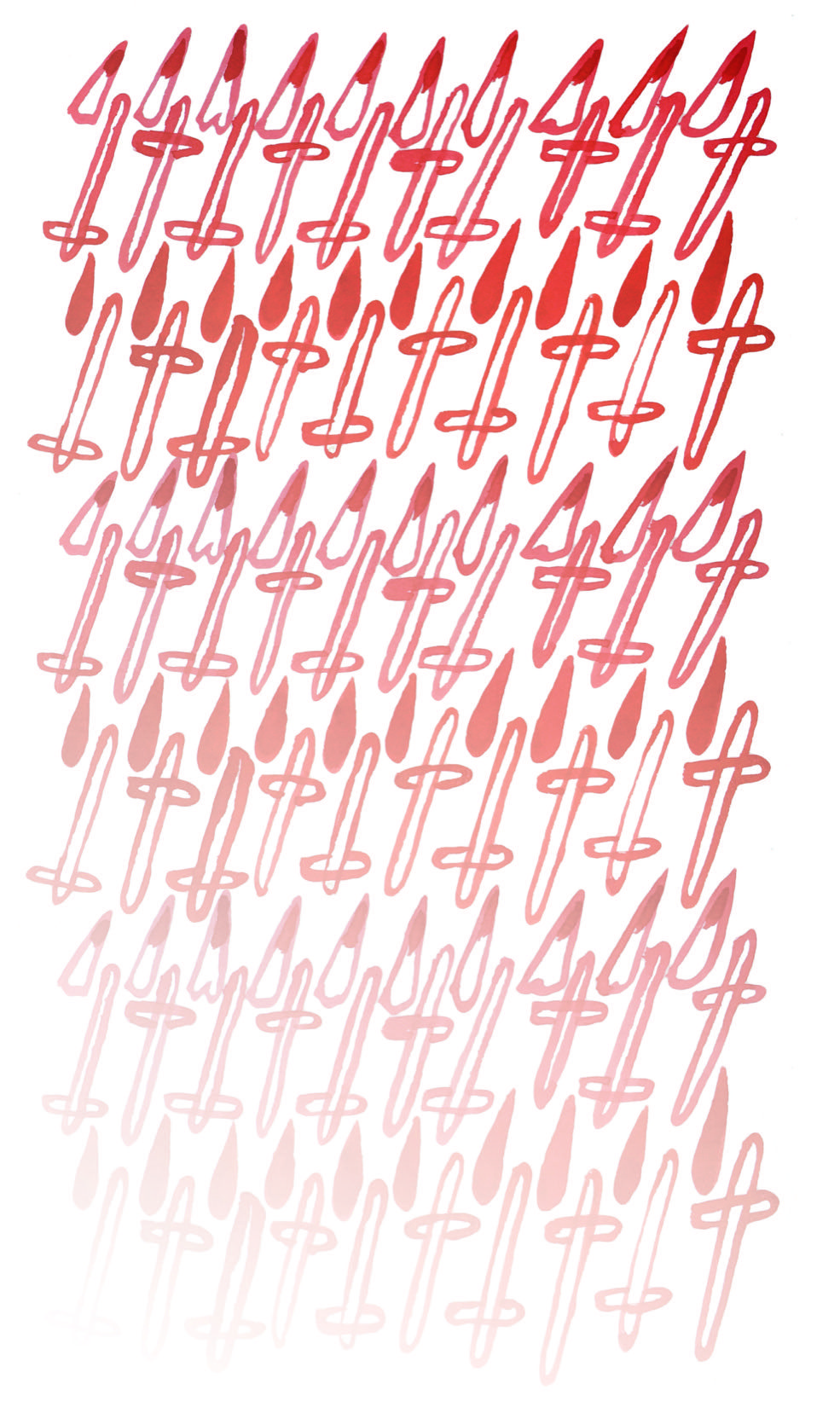 Bram Stoker, the author of Dracula, was an early eco-goth. The erotics of the vampire—of men who stalk virginal women—was buried in Stoker’s Dracula, who was, after all, living in buttoned-up Victorian England at the time. Contemporary critics have since freed the erotics. Vampires are figures of desire, upon which historical anxieties can be placed. Here, Dracula is a stand-in for promiscuous sex. The vampire stalks his victims, seduces them, sucks them dry. The writer Linda Williams once alleged that in the vampire’s face, the woman sees her own mutilation, and entranced, cannot look away. In that sense, Dracula can certainly be read as a metaphor for the sexual assailant. Of course, when Dracula was hangry he was an equal opportunity offender (he bit both men and women). But the violence he enacted against women in particular are what the novel hinges upon.

There are female vampires, even in Dracula. Three to be exact. They could be the Count’s brides, or his weird sisters, or his daughters, or his former prey. Vampirism can serve as a kind of kinship network here, at best. As love affair. Harker, the protagonist of the novel, writes of one vampiress, “I seemed somehow to know her face, and to know it in connection with some dreamy fear, but I could not recollect at the moment how or where.” He is attracted to them and repulsed by them in equal measure. But these women, too, cannot escape the novel unscathed. Van Helsing, the vampire hunter, finds them fast asleep, open-eyed, then strikes stakes through their hearts, decapitates them, and fills their mouths with garlic. I wonder if Dracula mourned them.

Consider for a moment Only Lovers Left Alive, directed by Jim Jarmusch. In this dreamscape film there are only Adam and Eve, two soul mates and vampires, who meet up again and again across the centuries. (Vampirism as old age, vampirism as true love.) All they have is time and each other. They drive around Detroit, reminiscing about their shared history. (Vampirism as nostalgia, vampirism as sorrow.)

At one point, Eve asks Adam, “Mary Shelley—what was she like?” Fondness flits across his face as he responds, “She was delicious.” These are ancient beings. As Zora Neale Hurston once pointed out, “Real gods require blood.” But these ones can’t afford to feast on any regular human anymore. The blood is too contaminated in modern times. They now have to con their way directly to the source: hospitals, blood banks.

Ana Lily Amirpour’s black and white 2014 indie vampire thriller A Girl Walks Home Alone At Night opens with a politician on television instructing women to stay indoors. Later, a girl vampire in a black chador skateboards down the street. She stalks the denizens of Bad City, an Iranian town, biting and killing any men who disrespect women. She kills a pimp with the word SEX tattooed across his throat. She purrs into the ear of a small dingy urchin, “Be a good boy…” The threat is not spoken—it doesn’t have to be. Here is the female as predator, a wanderer who bites as well as observes. (I wish all girls had fangs.)

Eventually, she meets a human boy, who is drunk, fresh from a costume party where he dressed as Dracula. She sees him illuminated under a lamp-post, pauses, does a double take. She brings him home. The two seem to pulsate with longing. They are both romantics at heart.  He desires her, she resists his neck. He pierces her ears with stolen diamond studs. It’s a pinprick, a penetration on his part, not hers. But you can’t blame the girl, not really. This particular boy, however human, is cute and she has time to kill.

This is where the vampire stands: in the shadows, where fear meets desire.

Richard Dyer points out the long historical use of homoerotic imagery in early vampire fiction in his article, “Children of the Night,” pointing out that “the necessity of secrecy, the persistence of a forbidden passion, and the fear of discovery” created a clear parallel between vampires and queer folks.

The queer vampire film became a 70s B-movie staple. And while they were often exploitative in their portrayal, particularly of queer women, they did move the genre from subtext to full-on camp.

Anne Rice’s The Vampire Chronicles and Whitney Strieber’s The Hunger are examples of the explicitly queer vampiric protagonists that cropped up in the 80s and 90s. More contemporary examples include Let the Right Ones In, directed by Tomas Alfredson. The movie revolves around two desperate twelve year olds, Oskar and Eli. Although, the latter admits, “I’ve been this age for a very long time.” Oskar is a lonely, bullied child of divorced parents. Eli smells vaguely like rotting flesh. It seems like a classic girl-meets-boy story if not a little supernatural. Curled up in Eli’s bed during a sleepover, Oskar asks, “Will you be my girlfriend?” Eli responds carefully. “Oskar, I’m not a girl.” They kill a bunch of neighborhood bullies and run off together. God, that’s romantic.

In TV land, True Blood, turned its vampire tale into a melodramatic, queer allegory. The show begins two years after vampires have “come out of the coffin” and shows the American Vampire League, a thinly veiled allusion to organizations like GLAAD or HRC, fighting for vampire equal rights. And while the metaphor was heavy handed, it indicated that the show was riffing off the genre by which it was produced.

The vampire’s only sustenance is blood. Blood is what they crave, but it is also where there origin myth possibly began. Porphyria, or “Vampire’s Disease,” is a genetic disorder, a kind of hemophilia, that is characterized by the malfunction of hemoglobin production. The disease presents symptoms similar to those of vampires including extraordinary sensitivity to sunlight, red or purplish urine, an aversion to garlic, and shrunken gums that make the teeth appear more canine-like.

Vampirism, with its connotations of sexuality and contagion, were often linked to other diseases. Anemia, tuberculosis, cholera, the bubonic plague, venereal diseases, were all often misdiagnosed as an unfortunate case of a vampire attack.

Post-1980, the vampire’s thematic association with blood, power, queer erotics, and disease, made the link to HIV/AIDS inevitable. The undead were the perfect figures on which to project all the anxieties and fears of those afflicted with the disease, as well as those who saw HIV+ people as less than human.

Here is some of a poem, titled “Le Vampire,” or “The Vampire,” originally written in French by Charles Baudelaire, “You who, like the stab of a knife/Entered my plaintive heart/You who, strong as a herd/Of demons, came, ardent and adorned,…To make your bed and your domain/Of my humiliated mind/­—Infamous bitch to whom I’m bound…Like the maggots to the corpse…Fool!—if from her domination/Our efforts could deliver you/Your kisses would resuscitate/the cadaver of your vampire!”

Your kisses would resuscitate the cadaver of your vampire. French scholars have debated, to no end, whether the speaker is the vampire or the prey. It is impossible to tell, though some ambiguity gets lost in translation. The prey and predator blur together, one body not two. It is symbiosis.

Take it from me, there is not much to do in the three-month window between two needle pricks that will tell you whether or not your blood, your body has become infected. But even now, I can’t tell which one of us was the bloodsucker and which one of us the host.

Think of the flea, which circulates blood around the world. Not unlike poetry, not unlike words. Both are viral in nature. The flea is what caused the Black Death. And it was this soil that the Count used to cross the sea from Transylvania to England.

Sylvia Plath once said, “Blood jet is poetry.” Blood sprays out from the veins, into the world, still somehow keeping in time with the heart. Gathered on a page, bound in a coffin. When the spine is cracked, the body that has been encased will be revealed. And maybe, just maybe, it will travel the world in the bodies of fleas as the undead, the living dead, the never dying.

DOMINIQUE PARISO’18 is sharpening her teeth.