Running out of Shore

The future of Providence's seaport 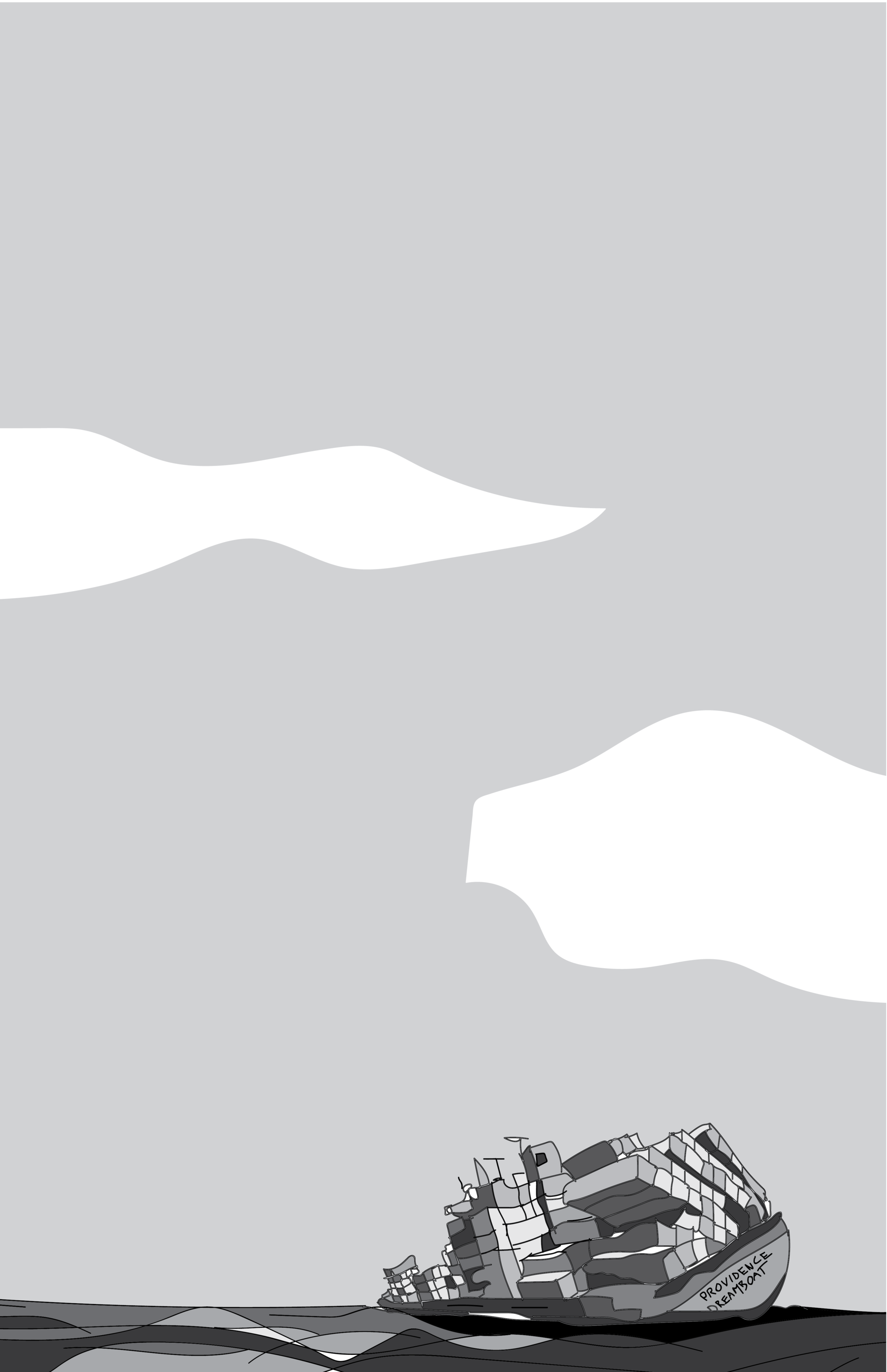 While the presidential election dominated media coverage on November 8, 2016, another item on the ballot in Rhode Island had potential to impact the relationship between the State of Rhode Island and the City of Providence’s industrial harbor. Question 5 asked voters to decide whether the state should issue $70 million in bonds to raise money to improve and expand the commercial seaports of Providence and Davisville. The seemingly simple idea of investing in one of the state’s most enduring economic assets turned out to be anything but, with the vote coming after months of tense debate and political posturing. The case ties together persistent issues in Rhode Island politics, as the state’s economic and cultural identity undergoes tremendous change. The conflict stirred up old feuds between local businesses and fiscal conservatives, tracing its origins back to the beginnings of Providence’s ‘renaissance’ in the 1990s. Nothing is ever simple in Rhode Island when it comes to public money, and the economics of the port is no exception.

Providence’s commercial seaport is nearly invisible now to most of the city’s residents as it is confined to a small area on Field’s Point, a short peninsula on the west side of the harbor. Yet, the city has always been a center of commercial shipping. The first permanent dock was built in the late 1600s, soon after the site for the city had been bought from the Narragansett tribe as a refuge for religious exiles from the other colonies. Providence soon became a hub for the horrific industry that James Madison called “the unnatural traffic”—the slave trade. 18th-century Rhode Island, and Providence in particular, was a northern hub of the trans-Atlantic slave trade that transported enslaved Africans to the Caribbean. Rhode Islanders built, owned, captained, and crewed the ships that made this circuit and returned with accumulated wealth that made the state’s fortunes. By the mid-18th century, 10 percent of the city’s population were slaves.

Building on its dark history of slavery and colonialism, Providence has continued to grow into a hub for domestic and international cargo entering the Northeast. Today its 40-foot-deep ship berths put it nearly on par with the port of Boston in the size of vessels it can accommodate.

In 1994, the city sold the industrial land on Field’s Point to a private investor to be developed into a center of commercial shipping. The deal created a nonprofit entity called ProvPort to hold ownership of the land in order to avoid taxes and serve as a separate entity from City Hall, which did not want to manage the day-to-day logistics of the port. Although the City of Providence appoints two of the five members of ProvPort’s board, it contracts a for-profit company called Waterson Terminal Services to oversee the port’s daily operations. It then leases sections of the land at Field’s Point to nine individual import companies for processing and storage. Currently, six percent of ProvPort’s revenues go to the city and its tenants employ approximately 1700 workers.

However, the port’s growth has exceeded the limits of its current space. Between the piles of salt and coal, the state-of-the-art cranes, and the open area needed for unloading cargo like cars or wind turbine blades, ProvPort says there simply is not enough room on Field’s Point for the port’s current business. Rhode Island Commerce Secretary Stefan Pryor told the Providence Journal in July, “We examined the claim ... that the port is running out of space and found it to be credible.” At the same time, port operators were anxious to improve facilities and increase cargo capacity due to the shift in business expected to take place following the 2016 expansion of the Panama Canal. Since the new canal can now accommodate ships twice as large as before, the arrival of “New Panamax” ships in large East Coast ports like New York are predicted to generate more business for smallto medium-size cargo ships that can cheaply distribute that cargo throughout the Northeast. Other smaller commercial ports in the region had already put significant funds into modernization projects with the hopes of what ProvPort’s spokesperson Bill Fischer called “capturing the feeder port market.” Providence was eager to catch up.

As a result, port management decided that buying more land north of the current ProvPort property was the most plausible option for expansion. At the time, Fischer called the area, roughly bounded by Allens Avenue to the west and Collier Point Park to the north, “a very small scrap operation and a series of dirt patches.” It seemed to fit the requirements perfectly, if only a way could be found to pay for it. The original deal creating ProvPort in 1994 had been sweetened by a loan from the city, funded by municipal bonds, and over the two decades since then bonds had been used to support ProvPort when its finances were in poor shape. ProvPort, on the other hand, was still paying off loans it took out along with federal grant money in 2013 to buy new cranes, meaning its credit was maxed out as far as commercial lenders were concerned. Advocates of the expansion then turned to the only choice left: the State.

The original version of the bill in the legislature suggested creating more land by building out into the harbor and extending the ship channel northward in order to allow ships to dock alongside the additional area. However, strong opposition by the Rhode Island environmental advocacy group Save The Bay quickly convinced ProvPort and its allies to abandon that plan. “We sounded the alarm publicly,” Topher Hamblett, director of advocacy for Save the Bay, told the Independent. “Eight days later ProvPort came out with a clear categorical statement that they will not fill it period.” Additionally, any expansion of industrial activity brings with it some degree of public health risk, pointed out Frank Carini, founder of the online environmental reporting project ecoRI. “I know the mayor wants to keep an industrialized working waterfront,” he told the Independent. “Regardless of whether they expand or not, it affects the neighborhood.” In the end, it comes down to a question of alternative options. Moving the expansion to the Allens Avenue properties would move port infrastructure closer to Rhode Island Hospital and bring loud and dusty activity to an area that has one of the highest asthma rates in Rhode Island. But City Council President Aponte, who represents the area encompassing ProvPort and the site of the proposed expansion, pointed out that any development would be better than the current situation. “I think a reasonable person could say the activity down there is not the highest and best use on the Providence waterfront,” he told the Journal. Besides industrial facilities, the area near ProvPort’s current location is home to a handful of retail businesses and restaurants. Jennifer Luxmoore of Sin, a specialty bakery on Allens Avenue, told the Independent she was unaware of the expansion proposal but that “we haven’t had any issues” with the port’s operations.

Before the proposal to issue state bonds could be put before voters in November, it had to be negotiated between the city and the state and passed by both houses of the state legislature. Lawmakers split votes along traditional lines. Representatives of smaller towns and fiscal conservatives opposed the proposal as a gift to big business that would only benefit Providence and Davisville. Supporters argued that it was a critical investment that only the state could supply. Only in the last week of the General Assembly session this past summer was a compromise reached with the help of the city. To satisfy critics of bill, Providence Mayor Jorge Elorza agreed that the land bought with state funds would remain state property instead of being ceded to the city as the plan initially outlined. With the legislature appeased, the only remaining step was to put the bill to a popular vote. Everything came down to the general election.

Last November, Rhode Island votes passed Question 5 with more than 60 percent support. Critics argued that the last-minute merger of the ProvPort and Davisville port bonds was done to ensure passage by voters with a greater interest in the economic success of Davisville than Providence. On the media front, a consortium of business interests spent more than $400,000 on a full-scale election campaign in favor of the proposal. With a large budget and an electorate with traditional support for maritime industry, the supporters of the measure had a clear advantage from the beginning.

Almost 4 months later, ProvPort and the Rhode Island Economic Development Corporation are meeting regularly to work through the initial steps of implementation. The underused land parcels in the Allens Avenue area that will be purchased and combined into the new port operations area remains unsettled, and the state has not yet issued the bonds to pay for the acquisitions. ProvPort’s Fischer estimates that the process of buying and preparing the area for business may take around 18 months, with nearly half of the $20 million budget covering the cost of clearing and paving the land.

In the past, the economic benefits of Providence’s port have often come with steep consequences. One of ProvPort’s neighbors, Rhode Island Recycled Metals, has been the subject of multiple legal actions on the part of the state Department of Environmental Management for allowing fuel oil and pieces of scrapped vehicles to enter the harbor. Before that, the plot was the site of an electronics scrapyard which was classified as a toxic waste dump by the EPA. This history of disregard for Rhode Island’s water resources goes back to the mills of the late 1700s, which polluted the Blackstone river upstream from the harbor and began a centuries-long tradition of disregard for the Narragansett Bay’s health.

When Save the Bay strongly objected to building out into the harbor to gain more space and succeeded in altering that part of the project, the organization set a precedent that any new port development must take environmental concerns into account. ProvPort’s Fischer told the Independent that the organization maintains a “long, healthy working relationship with Save The Bay,” but how this will work in practice as the port expands remains to be seen. City Council President Aponte says the city has three goals going forward: “expansion of economic activity, living supporting jobs, and to minimize the negative environmental impacts of maritime uses in and around the port.” Topher Hamblett at Save The Bay is optimistic: “We have a vision for ProvPort and the port of Providence generally to be a ‘green port’...facilities are using renewable energy, controlling stormwater pollution, environmentally friendly to the waters around them.” Hopefully Providence can maintain that balance.

PATRICK ORENSTEIN B’18.5 encourages you to donate to Save The Bay (savebay.org), the Environmental Justice League of Rhode Island (ejlri.org), or ecoRI (ecori.org).