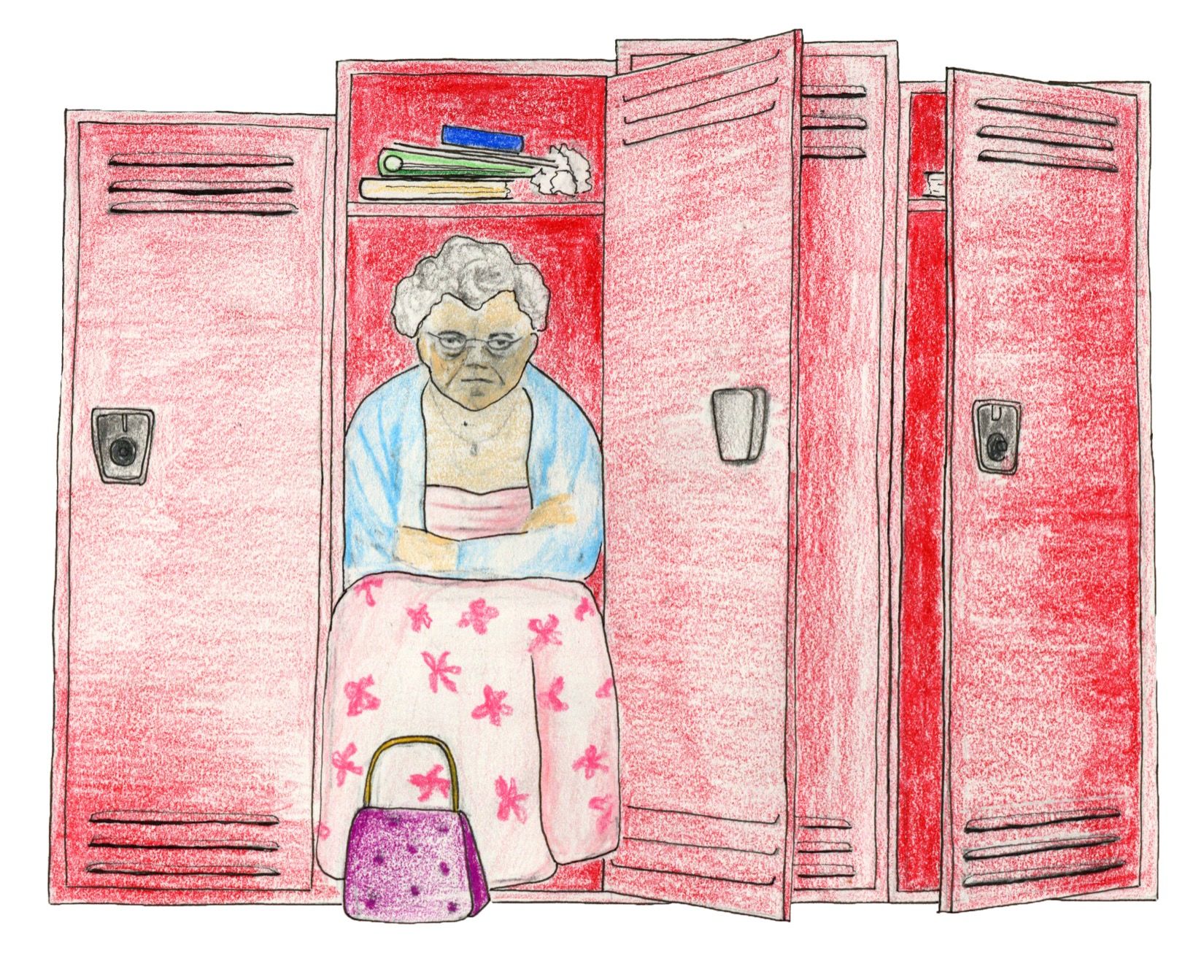 Prom is an eternal category, cutting across boundaries of time and space. Prom has no age. Prom is love. Which makes it ridiculous that Eufala High School has decided not to allow Bryce Maine, a senior at the school, to bring his grandmother as his date to Prom. The Huffington Post reported that Maine’s grandma, Catherine Maine, who he calls “Nanny,” never had the chance to go to prom. Hoping to introduce her to the beauty of Prom, Maine asked his grandma to the event by painting the word ‘PROM’ on a small piece of canvas, surrounded by his own handprints, also done in the painterly medium. Fortunately for Maine, his grandma accepted his offer. But unfortunately for Maine, his principal did not.

Steven Hawkins, Eufala High School’s principal, has one job. And he does this job well. He is responsible for making sure his students don’t drink at Prom. Education is a secondary concern in comparison to the imperative to prevent underage alcohol consumption at Prom. Thus, Hawkins banned Grandma “Nanny” Maine for fear that she might bring alcohol. As Maine remembered it in a video posted to YouTube, he asked Hawkins to “Give me one reason why...And he said, ‘Alcohol. In case, she was trying to distribute it to minors.’”

The Maine’s proceeded to take the fight to a higher level: the school board. But again they were only met with disappointment. After all, the School board has their own job: ensuring that Eufala High School doesn’t become a mockery. And so, Maine’s cousin Sarah Catherine described on Facebook how “they think if he takes Nanny to prom then future students will do it as a joke and make the school a mockery!”

Alas, no triumphant victory for the Maines. Should we be surprised at their bad luck? After all, they’re a family named Maine living in Alabama. But hope remains; Eufala High’s prom isn’t until April 8, and using the hashtags #letnannygotoprom and #letnanniegotoprom, you just might change the administrators’ minds. Let the students drink I say. Let the school be a mockery. Get Grandma to Prom!

A few days ago, Todd Wallack, an investigative reporter for the Boston Globe’s Spotlight team, tweeted a congratulatory message to the staff of the Booster Redux, which is Pittsburgh High School’s student newspaper—located in southeast Kansas. Over the past several days, the Redux has made local headlines after completing an investigation into Dr. Amy Robertson, who was hired as the school’s principal at the beginning of March. The investigation began after students discovered that Corllins University, where Robertson claimed to have received her masters and doctorate degrees, does not in fact exist. A quick Google search for Corllins University—whose motto is “The Place for Effective Learning & Education”—will take you to a ‘pissed consumers’ forum where several other individuals, including students who attempted to enroll in the university, express a similar concern.

The Redux staff, which includes five juniors and one senior, spent weeks investigating the various universities which Robertson claims that she attended. Connor Balthazor, one of the Redux’s journalists, said to the Washington Post, “At the very beginning it was a little bit exciting. It was like in the movies, a big city journalist chasing down a lead.” Though Robertson maintained that she attended the fake university before it lost its accreditation, she also could not provide a transcript from the University of Tulsa, where she claimed to receive her undergraduate degree. Furthermore, in a conference call with the newspaper, Robertson apparently “presented incomplete answers, conflicting dates and inconsistencies in her response.”

In an article about the controversy, Samantha Schmidt of the Washington Post reported that under Kansas state law, student journalists are protected from administrative censorship, which gave the Redux staff both the freedom to pursue the investigation and, as newspaper advisor Emily Smith commented, a responsibility to “get the story right.” After the Redux’s investigation was released—and after an anonymous letter entitled “Pittsburgh Citizen X” was circulated throughout the town—Robertson resigned on Tuesday night. The Pittsburgh board of education quickly and unanimously accepted her decision. The Redux’s reporting has received praise from both local and national journalists. Having recently watched the film Spotlight, the students were excited to learn that Todd Wallack had tweeted about their endeavor. As for Balthazar, now known to this reporter as ‘Deepthroat,’ he doesn’t know if he wants to pursue a career in journalism. Why pursue a doomed career in investigative journalism when you can win an Academy Award playing a print media dinosaur in a critically acclaimed Hollywood feature?

There are many instances in which strictly enforced rules can result in a great lack of productivity. Police officers forgive some drivers for exceeding the speed limit. It would be unrealistic, though legal, to give a speeding ticket to any driver cruising at 36 MPH on a 35 MPH road. Likewise, suspending every student who skips class in high school would probably result in the suspension of half the school.

However, this was a risk Principal Lisa Love of Harrisburg High School in Pennsylvania was willing to take.

The new principal, who began in January,  announced that students who had skipped at least one week’s worth of classes over a period of 45 days were to serve a one day suspension. 500 out of 1,100 students were given suspension notices throughout the last week in March. The school stated that these suspensions were administered as an admonition to at-risk students for whom education was not a priority. The district holds one of the lowest standardized test scores and graduation rates in the nation, and Love is committed to transforming the students’ attitudes toward their education.

According to the administration, the best punishment for students who do not want to be in class is to give them a day off of class.

The students of Harrisburg had few qualms with the school itself, but rather with sitting through classes. Most of the students who skipped classes remained on campus and socialized in common areas such as the gymnasium, locker rooms, and bathrooms.

Fox 43 news reported that approximately 100 parents met with Love to discuss issues surrounding absences, both excused and unexcused. While some were frustrated and argued that suspensions would be unsuccessful at incentivising class participation, others saw it as an opportunity for better communication with the administration.

Love was hired in order to radically improve the academic standing of the public high school. Whether her hotly debated approach will usher in the intended transformation or not, she contributed to a much needed discussion about the many barriers to student performance—barriers such as not being allowed to go to class. Keeping students in class reduces the amount of time they can “wreak havoc upon the school,” as she told reporters at PennLive.

Imagine the cataclysm that must ensue as a result of students talking in the locker room. Next, students will be skipping the lunch lines in apocalyptic numbers and passing love notes in class, acts of tomfoolery that can certainly disturb the delicate balance of high school. Maybe we’ll see these added to the growing list of suspendable offenses.