Constructing Asian Identity in Comme Des Garçons and Get Out 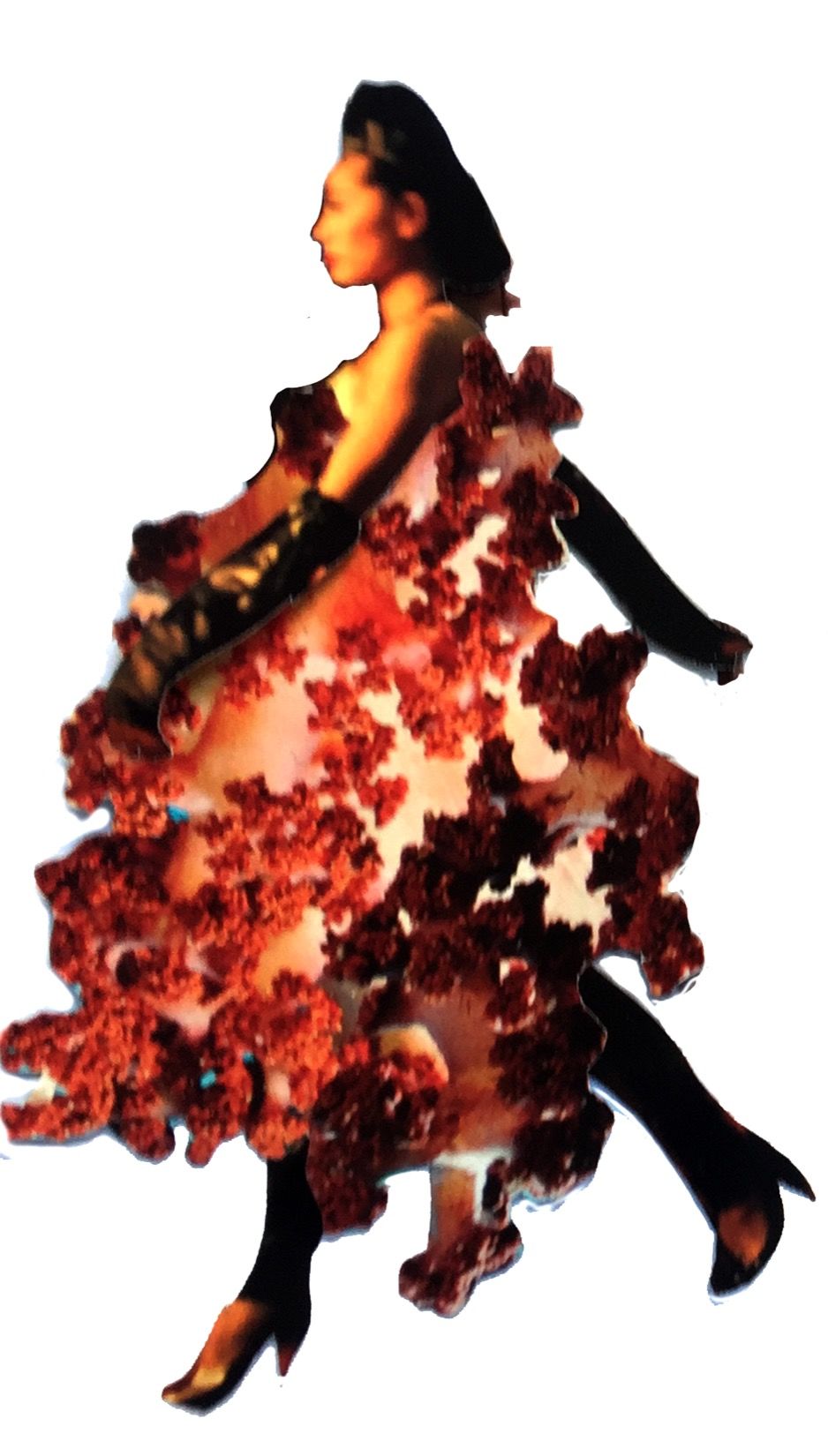 During this year’s Paris Fashion Week, Rei Kawakubo, the 74 year-old Japanese founder of the high fashion clothing brand Comme Des Garçons, pushed the bounds of her avant-garde designs with a 2017 fall/winter women’s line entitled “The Future of Silhouette.” The show’s only semblance of normalcy was found in its setting: a basic white runway, and in the models’ shoes, a collection of gray and black Nike runners.

Everything else, however, bore an unusual aesthetic: models walked onto the runway in clothes reminiscent of bulbous cocoons, assuming silhouettes akin to wriggling bacteria under a microscope. Kawakubo’s fabrics were shocks to tradition, including what appeared to be aggregations of lint, tinfoil-like silver lining, and wrapping paper. “Lumps and bumps,” the nickname for Comme Des Garçons’ 1997 spring/summer line, could be used to describe her newest season’s zeitgeist: an amorphous woman trapped in an absurdist deconstruction of conventional silhouettes.

With the disoriented facial expressions of the models, many of whom seemed lost on the runway, Kawakubo’s overall message with her newest line became clear: a sharp critique of conventional feminine beauty, a direct challenge to the fashion world itself (Comme Des Garçons has remained independent as fashion conglomerates such as Kering and LVMH have bought out hundreds of luxury brands), and a momentous leap forward into fashion’s incredible unknown. Her directorial spirit at the helm of Comme Des Garçons mimics its maverick beginnings around the time of the second wave feminist movements of the ’60s and ’70s. Comme Des Garçons, a French phrase translating roughly to “like boys,”  is ironic, because if anything, Kawakubo’s designs are clearly not ‘like’ anything. Kawakubo’s art could be described as anti-fashion, as her 2016 fall/winter collection, “18th Century Punk” suggested. Punk, an iconoclastic style Kawakubo loves, expresses the part her clothing has played in cutting open the margins of what fashion can be: liberating.

Andrew Bolton, the director of the Metropolitan Museum of Art’s Costume Institute, said recently, “We are in a period where fashion, and designers, are increasingly regarded as disposable. Rei [Kawakubo] has been singularly dedicated to a creative vision, reminding everyone of how valuable that is.” In a Eurocentric, male-dominated fashion world, Kawakubo found her footing by staying stubbornly true to her personal notions of beauty, an individualism that resists the restraints on what she, a Japanese woman, is ‘allowed’ to do. Through her independence, Kawakubo subverts and transcends the visual scrutiny and racial expectations within an industry built on both.

The racial expectations of a visual medium manifest in Jordan Peele’s critically acclaimed film Get Out, which presents a portrait of America’s insidious colorblindness. Get Out is filled with satirical moments brazenly calling out contemporary modes of racism that operate within white, well-to-do communities branding themselves as progressive. The lion’s share of Get Out focuses on a diametric tension between African American and white characters, with an almost entirely Black and white cast, except for one specific moment in the film. When the protagonist Chris (Daniel Kaluuya) is paraded around to white ‘shoppers’ at a cocktail party who are vying for Chris’s body, an older Japanese man named Hiroki Tanaka (Yasuhiko Oyama) abruptly asks Chris in a heavy accent: “Is the African American experience an advantage or disadvantage?” The very next scene of Get Out shows a slave auction masked as a Bingo game, in which Tanaka is seen in the very back row, almost hidden from the viewer, bidding for Chris’s Black body. By being represented as the model-minority foreigner attempting to integrate himself into white America, Tanaka embodies a common representational trope of Asian Americans. Jordan Peele seems to be saying that Asian Americans have gripped their minds around trying to find a space for themselves in white America, which has only inhibited them from racial liberation.

Claire Jean Kim elucidates the awkward in-betweenness Asians experience in America through her theory of racial triangulation: Asians are generally perceived in the societal eye as superior to Blacks, yet can never fully be a part of white America, so they are perpetually caught in a position of racial limbo. Tanaka endeavors to be white, wearing the same cocktail party garb as everyone else and bidding on the same Black body, but cannot shake himself of his stuttering accent and Japanese complexion. Tanaka’s white peers include him nominally and physically within their coterie, but in a tokenized fashion.

I watched Get Out and left the theater in a constructive, musing disorientation. The exuberant claps and hoots from the audience when Chris kills the white Armitage family compounded with my constant mental movement back to the pivotal Tanaka line haunted me. I was enveloped in a serious case of cognitive dissonance—the one dimensionality of Tanaka infuriated me, and as an Asian American, that one question this is all we get? repeatedly rang in my mind. Peele’s point cut through nevertheless: Asian Americans are not just complicit bystanders, but active participants in anti-Black racism. Get Out lambasts Asian Americans for shunning other people of color in pursuit of whiteness, a zero-sum ideal.

Tanaka drapes himself up in a curtain of ignorance and fruitlessly throws himself into the unflinching wall of white America. Any semblance of liberation is lost to a desire for inclusion, which unwittingly excludes Tanaka even more. 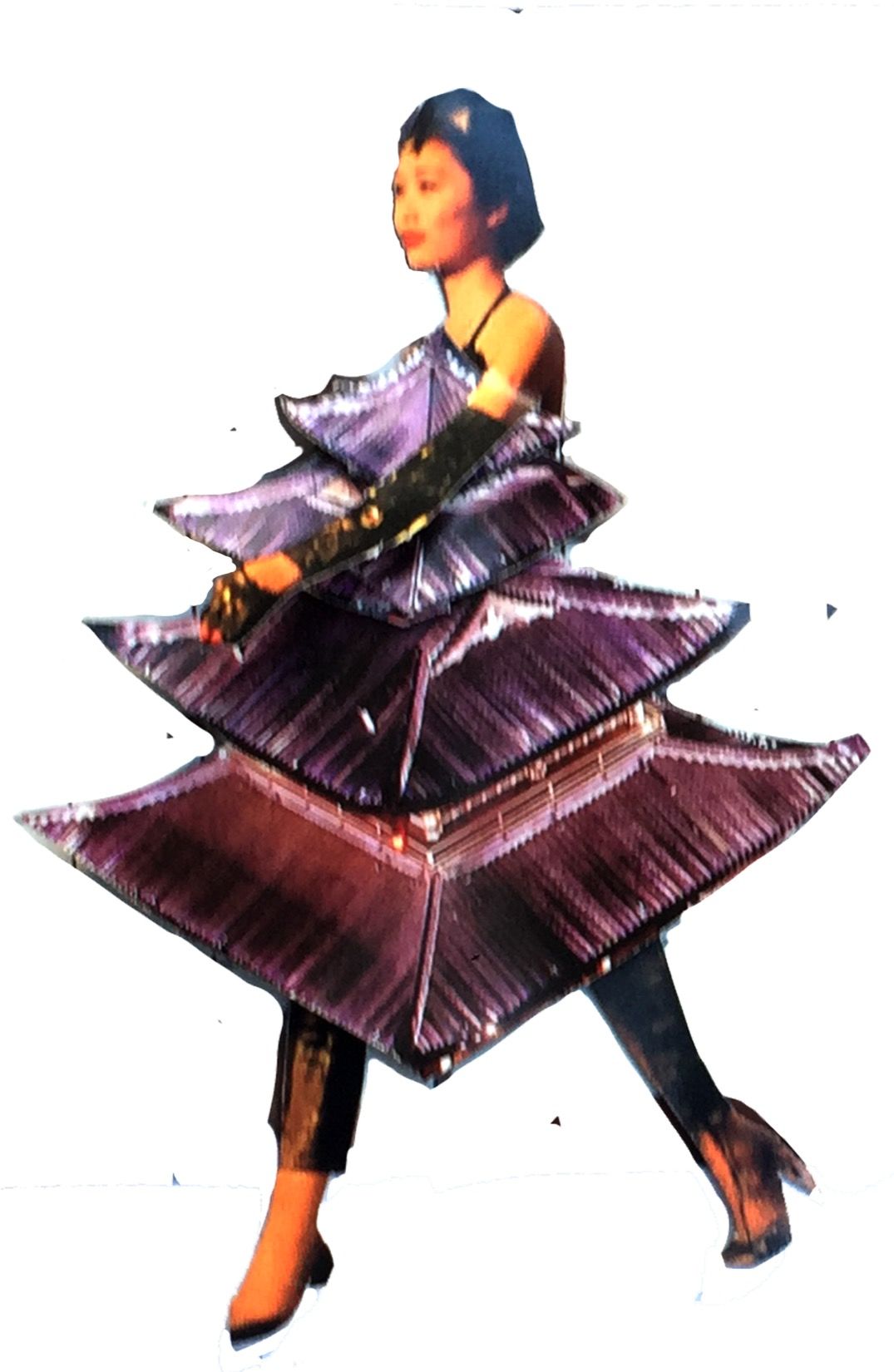 I recently saw a Kawakubo ‘dress,’ or in her words, a ‘woman’s ensemble,’ in a museum, a piece from the “18th Century Punk” fall/winter line of 2016. This ensemble is thematically similar in its top and skirt pieces, as both are cut from the same black fabric and laced with jacquard floral prints. At the same time, the two parts could not be more different: the top visually references the staunch power and integrity of samurai armor, while the skirt references 18th-century panniers, European

undergarments that vastly extended the width of skirts to highlight elaborate woven patterns. Kawakubo deliberately blends her Japanese heritage with Western influences, but is careful in dividing the two (the top and bottom are separated by a strip of bare skin). Through a distinct intermixing, her identity as expressed through fashion thus becomes wholly Kawakubo.

Kawakubo said in an interview that “being born in Japan was an accident. There is no direct correlation to my work,” emphasizing a distance from the political forces surrounding her. Although there may not be a “direct correlation” between her work and growing up in Japan’s then-American cultural regime, Western influences such as American denim, patchwork, and flannel designs are undoubtedly present in Comme Des Garçons clothing. Instead of simply appropriating American designs as is, Kawakubo mangles and weaves disparate American elements together, creating shirts and jeans sewed together with odd, clashing patches of flannel. As a result, a subversion and modification of external influences defines Kawakubo, allowing her to be known as an artist before being known as Japanese.

As a person is watched, they become a powerless object to the viewer. The gaze is a powerful tool—especially in visual mediums such as film or fashion. In Get Out, Tanaka's one dimensional simplicity is heightened by his susceptibility to the audience's eye. Tanaka’s appearance and accent distinguish him from the rest of the film’s characters, and so the audience gazes at Tanaka with both wonder and disbelief—how could a person of color be a part of this utterly amoral brutalization of others? Jordan Peele leaves the audience to answer it for themselves.

Kawakubo’s fashion subverts the objectifying power of the gaze. In fashion, the object of gaze—the model and her clothes—can be uniquely inhabited by the observer through purchasing and putting on that same clothing. It is through this medium that Kawakubo operates; she snatches away visual objectification by allowing her viewers to take part in the art of fashion (although runway clothes are usually caricatures of the clothes actually sold to customers). As Kawakubo said in an interview with Interview Magazine, “when you put on clothes that are fighting against something, you can feel your courage glow. Clothing can set you free.”

Both Kawakubo’s clothing, which debuted in Paris, and Tanaka in Get Out, which debuted at Sundance in Salt Lake City, become visual subjects of largely Western audiences. The multi-dimensionality of Comme Des Garçons juxtaposed with the one-dimensionality of Tanaka diverge in combatting racial stereotypes, the legacy of which  is easy to latch onto: there is no overt “racial” element to Kawakubo’s clothing, and thus the audience contends with Kawakubo the individual, rather than Kawakubo the person from Japan. But there is no “individual” element to Tanaka, who loses all semblance of individuality for the sake of assimilation into whiteness. The gaze thus becomes a poignant factor in audiences’ mental constructions of racial categorization, whatever the medium may be. 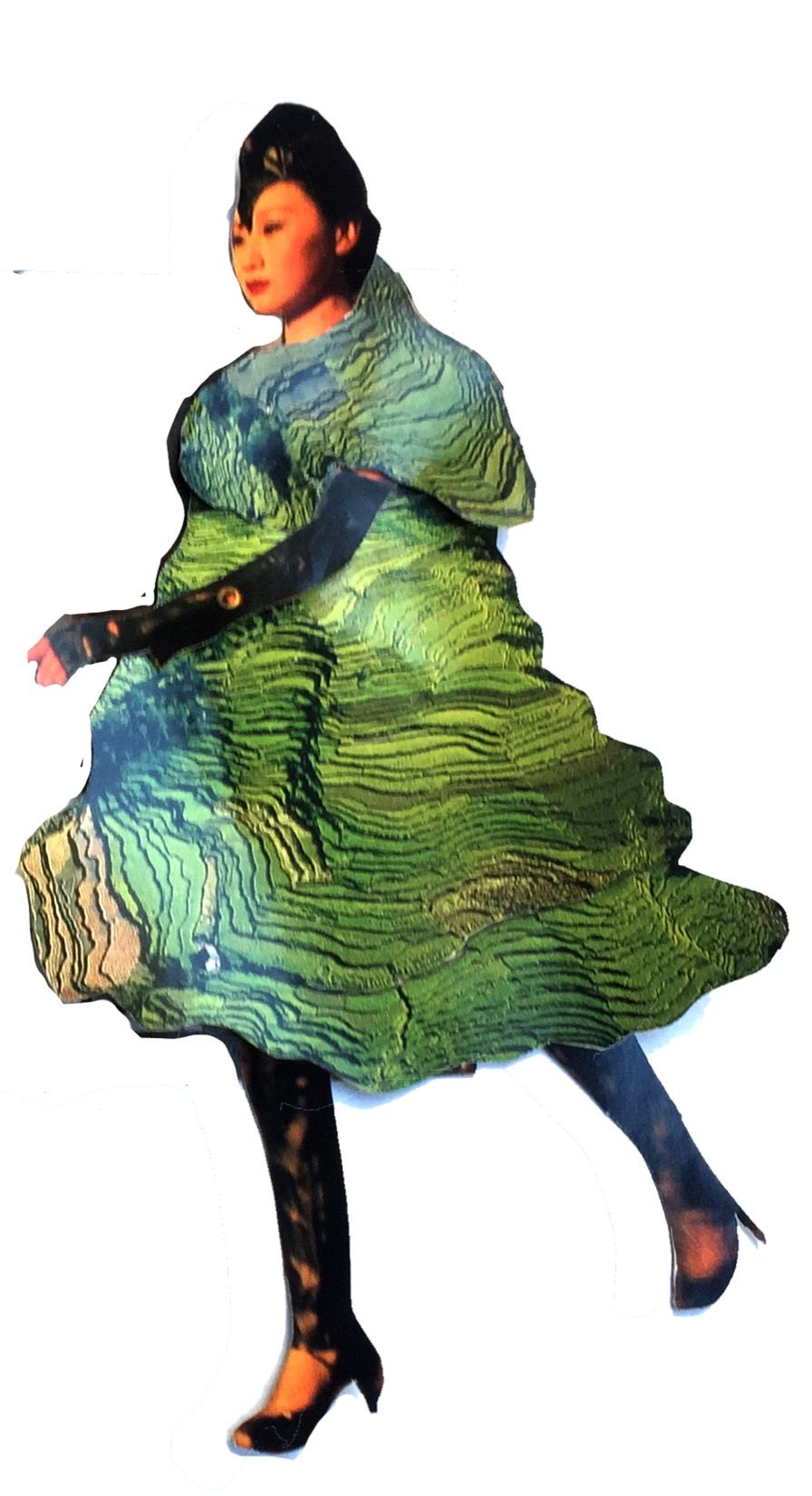 Kawakubo famously said of her clothing that she “never intended to start a revolution,” but only created what she “thought was strong and beautiful. It just so happened that my notion was different from everyone else’s.”

After Yves Saint Laurent, Kawakubo is the second designer to have a solo exhibition at the Metropolitan Museum of Art, which will open on May 4, 2017. The exhibition has been entitled “The Art of the In-Between,” and considers Kawakubo’s exploration of the often reduced tensions between the East and West, male and female, past and present. There, her lifetime work will be gazed upon in adulant admiration and critical curiosity, as hundreds of thousands of visitors encounter the artistic masterpieces Kawabuko has crafted since 1981, the year she debuted in Paris.

What Peele may have inadvertently done with Get Out is give Asian Americans—who continue to be forced into stereotypical filmic representations, or denied it altogether—a substantial portion of high profile screen time in a Hollywood film this year. Historically, films featuring Asian characters have depicted Asians as either a ‘yellow peril,’ seen in the evil genius series featuring Fu Manchu, or as the honest and benevolent detective Charlie Chan, who could not speak proper idiomatic English and was often played by Caucasians in yellow face. This trend hasn't changed. In the past two years alone, Tilda Swinton was cast as the ‘Ancient One’ in Doctor Strange, Emma Stone as Allison Ng in Aloha, and Matt Damon as William in The Great Wall. Asian characters are erased in in Hollywood through their depictions by white actors. Get Out's treatment of Asian representation is thorny, and although the film rightly criticizes Asian Americans who find social capital in their proximity to whiteness, the criticism is done so by a non-Asian person of color who implicitly offers suggestions to Asians on how to navigate their positionality.

In contrast, in the Comme Des Garçons Paris Fashion Week show, Rei Kawakubo constructed her own imaginary, a liberating vision from within. Kawakubo, when discussing the socio-political influences behind her designs, states that “growing up in postwar Japan has made me the person I am, but it’s not why I do the work I do.” For Kawakubo, her art “is a very personal thing—everything comes from the inside.”

Is the African American experience an advantage or disadvantage? It is a question coded with tensions: would it be beneficial for him, presumably in the eyes of whites, to trade bodies with Chris? Tanaka is aware of how much he sticks out from the prim white elite he is surrounded by, yet he nevertheless bids on Chris’s body, entranced by the pleasures of at least physically being near to whiteness via ownership of a Black body. In opposition, Kawakubo, who with her diminutive stature, blunt banged hair bob, and punk black garb entered into a fashion milieu dominated by men such as Calvin Klein and Giorgio Armani unabashed, carving out a space for herself. Through her unwavering pusuit of her notion of beauty, Kawakubo thus grew in fame to the likes of Klein and Armani. The disparity between Kawakubo and Tanaka becomes a difference in navigating the “in-between,” a difference between conformity and individuality. That difference means a lot.