A History of Twisted Spines 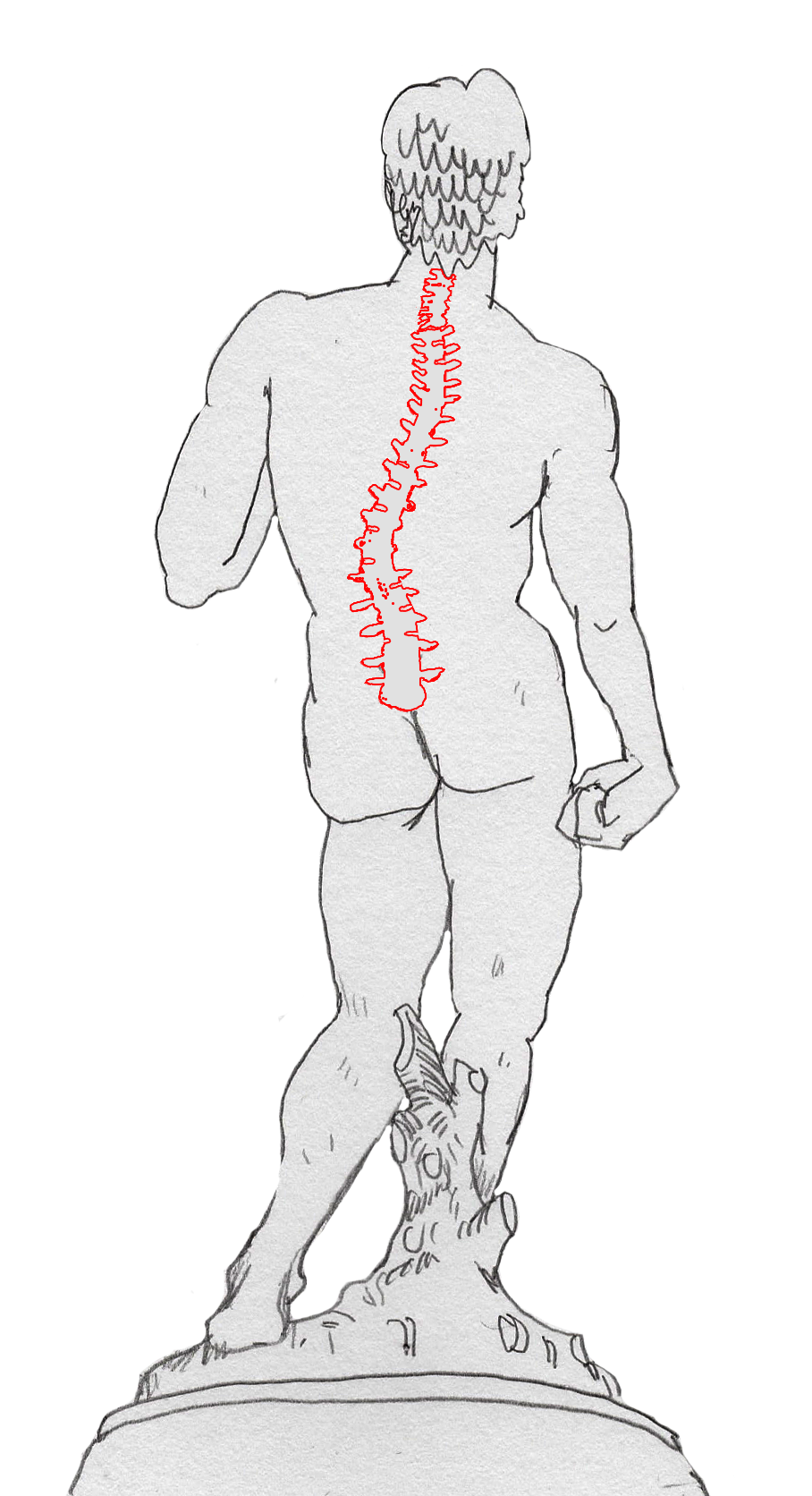 “What I would like to do is begin with a small incision in front, which would likely require us to break her third and fourth ribs, then cut around to the spine and begin the fusion surgery.”

A doctor told said this as I stood barefoot in his office at age 13. The doctor—whose name I have left behind, the memory too cold, too cutting, to hold onto—smiled with each word. What a puzzle he had been presented, in the challenging shape of a twisted spine snaking its way through the body of a 13-year-old girl.

There is an old and strange mythology surrounding the back—an intricate weaving of religion, legend and medicine. In his research, orthopedic surgeon Charles Mehlman points to ancient Hindu writings from 3500-1800 BCE as offering some of the earliest descriptions of scoliosis and its treatment.

“Scoliosis” comes from the Greek skolios, meaning crooked. Plato believed that a flexible, functional spine was the result of divine intervention. Hippocrates later classified five categories of spinal deformity—kyphosis (hunchback), scoliosis (lateral curvature), seisis (what he considered “burst fractures”), dislocations, and general fractures of the spinal processes. He also developed truly torturous treatments for such conditions, including the Hippocratic ladder, board and bench. Each device involved binding the patient either horizontally or vertically to wood and applying weight, with the hope of pulling the spine straight. In his work On Joints, Hippocrates warned against the false “physicians of spinal healing,” who used such devices to astonish a crowd, as spectacle alone, with no concern for the results. Hippocrates, who also penned the famous  tenet“Do no harm,” was well aware of how thin this line between patient and spectacle might be.

Social norms about what the body should be—how it should move, what it should do—have long enforced the malicious and false binary of ‘normal’ and ‘abnormal.’ Here, physical abnormality becomes a perverted and erasing descriptor that has the potential to remove individuals from society altogether by reducing them to their bodies alone and casting them to the agentless margin. In discussing matters of the back, the arbitrary line drawn between what is physically normal and abnormal neglects the simple medical fact that all spines curve. These curves are known as lordoses, and they allow us to stand upright; conditions such as scoliosis, kyphosis and lordosis (swayback) are all simply extremes of the normal.

Physicians, scholars, and religious authorities have historically made a complicated and violent connection between moral virtue and a healthy, straight spine. Medical historian Fay Bound Alberti traced this connection to the Book of Leviticus, in the Old Testament, which declares that anyone with a hunchback is forbidden to make a holy offering of food. In the Gospel of Luke, Jesus heals a woman whose back is bent and twisted, restoring her ability to stand. Physical deformity has thus been understood as a manifestation of immorality in the body—evil twisting its way out, with the deformed requiring salvation, not earthly treatment.

The ‘normal’/‘abnormal’ binary is also tied to class differences and the historical ostracization of the poor. One of the most mainstream portrayals of spinal deformity comes from Victor Hugo’s The Hunchback of Notre Dame. The twisted figure of Quasimodo is described as “a creature of the devil,” isolated and “hideous.” His poverty manifests in the perversion of his physical body, and he becomes a spectacle, for all to see and abhor. Hugo’s depiction of Quasimodo picked up on a centuries-old association between beggars and people with hunched backs, which, even today, is interpreted as a vulnerable position of solicitation and need.

This twisted union between the poor and the deformed is intensified by the expense that comes with pursuing treatment. Though I sometimes worry that I see the world lopsided because of my distorting curves, I can clearly see my privilege in receiving such treatment immediately. I was given this gift of a back brace, and though I ached, sweated, and chafed in it, I was also able to prove what I could do with its help. My aunt, however, who bears the same painful curves, grew up without the means to pursue treatment. Just a generation apart, she and I carry the weight of this condition in two radically different ways.

I felt utterly abnormal seeing the knotted rope of my spine lit up in Technicolor on the x-ray board that day in the doctor’s office; how could I have not felt this internal architecture? I had never before considered a spine to be anything but a straight line, drawn with a ruler, with care, and borne upwards like those dreary hanging models shown in school. This was the ableist norm—the invented categorization—so prevalent and tacitly accepted that I didn’t even recognize its existence until I no longer fit into the category of “normal.” I suddenly felt as though my body, this tender casing, was working against me; I could feel its malicious, sideways bend and I wanted desperately to get out. Reminded of Hippocrates’ devices, I daydreamed that a car would hit me and somehow knock my spine straight.

I have three curves in my spine: one in my lower back approximately 40 degrees to the left, another 33 degrees to the right, and a final kink snaking 25 degrees back to the left. These curves are measured using the Cobb angle, which runs from 10 degrees (mild) to 90 degrees (severe). When growing children present with curves between 25 and 45 degrees, doctors prescribe back braces to prevent the curve from progressing; however, they do not ‘fix’ the back, and rarely reduce curvature at all. There’s an uncertainty in the modern approach to treatment when it comes to curves around the 40-45 degree mark—where I fell. Some doctors immediately recommend spinal fusion surgery, while others are more hesitant, aware of the risk and long recovery period such a procedure entails.

Spinal fusion represents the complicated intersection of old medicine and new technology. It is an incredibly recent practice, often praised as modern and cutting-edge. At its most fundamental, however, it is quite primitive. As the Scoliosis Research Society describes it; metal implants are placed “onto the spine that are then attached to rods, which correct the spine curvature and hold it in the corrected position until fusion.” That is, you stick titanium rods in your body, and wait to see how they weather time and activity. Statistics from ScoliSmart clinics show that 26 percent of fusion patients were unhappy with the outcome of the procedure. 41 percent of those interviewed experienced no pain reduction post surgery. 33 percent lost all correction obtained through surgery within 10 years. These measures often come down to a question of pain; for some scoliosis patients, fusion is necessary to manage back pain and lead a normal life. Others feel, as I did, pushed towards this option prematurely, by a medical culture that prioritizes immediate results and seeks a cure.

Ultimately, I took the former route, and was fitted for a back brace, instructed to wear it for 24 hours a day. Once again barefoot in a doctor’s office, I was handed a hulking piece of seamless white plastic, a perverse rendition of a classical Greek torso that accounted for my curves. That day I also met an 8-year-old girl who gleefully pulled up her t-shirt to reveal her own brace, painted with blue and gold sunflowers. Her mom told me that she would wear the sunflowers everyday until she stopped growing—likely, seven or eight years.

I don’t remember feeling anything when I put the brace on for the first time. I lay down on my bed, sucked in my stomach, and carefully did up the Velcro straps. I moved awkwardly those first few months, unable to sit or pick things up with ease. I worried about the brace showing under my shirt, worried about people bumping into me and gawking at my hardness. I was jealous as I watched my friends take on those soft, lilting curves of puberty—like the first, hesitant crocuses of March come up from the earth—while I was left stiffly bound and concealed.

But in moments of discomfort and embarrassment, I thought about the girl and her sunflowers, about the pride she felt in her hulking plastic frame and her humped back. Faced with a history of making the deformed into spectacle, this girl occupied her brace not simply as a patient, reduced to her body and to her diagnosis, but as a person growing and living. Like her, I celebrate rather than curse all my kinks and curves. My spine is my trunk, lovingly, willingly and crookedly putting down roots and bearing my years. I can do nothing but thank it.

NORA GOSSELIN B’19 still has that smelly back brace in her closet.