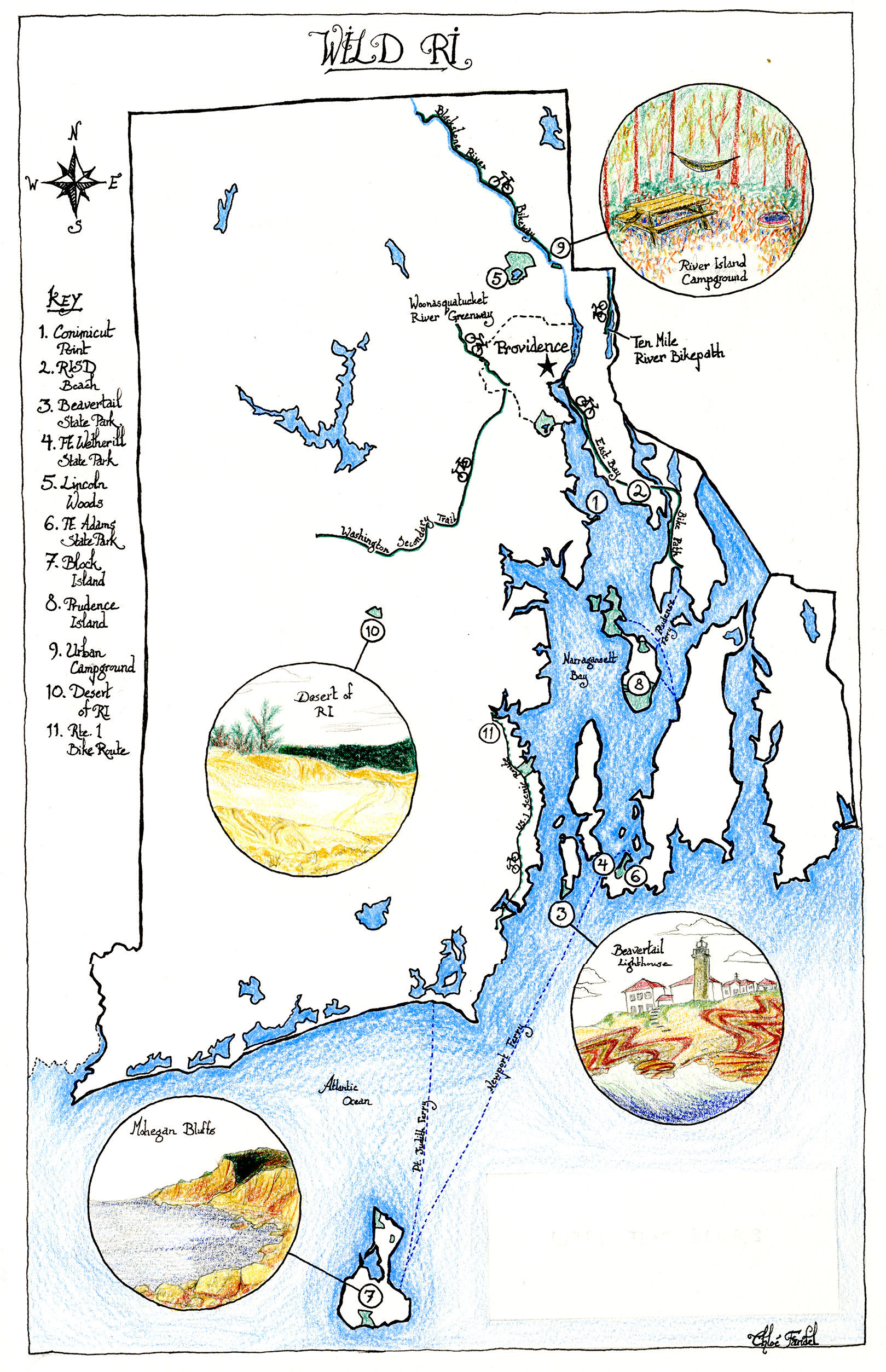 Around the edges of its grimy glamour, Providence boasts over 100 city parks and public green spaces; it’s easy to find a tree to climb or a grassy square to nap in without leaving the city limits. Just a short bike or car ride from PVD, the Ocean State overflows with bike routes, farms, state parks, forested campgrounds, and some of the nicest beaches in New England. Hop on your bike, jump on a bus, or rent a Zipcar, and get out of the city for the day, before it gets too cold to want to leave that drafty bedroom.

Pastiche, 10:00 PM, Wednesday Night: “We have an hour left in our Zipcar reservation,” my friend said. “I wanna go to a beach.” Twenty minutes later, her iPhone had guided us to a small, random parking lot at the end of a quiet, residential street. We got out of the car and walked to the shore, where, standing in the narrow bit of sand at the still water’s edge, we took in the distant lights of downtown Providence. –JW

DIRECTIONS: If you don’t have a car, the RIPTA 3 bus takes you to within a half-mile of the beach, which is located at the head of the Providence River, right where it opens up into the Narragansett Bay.

This beach—a pebbled stretch of sand on the Narragansett Bay bordered by salty, pungent marsh—is a favorite among students for its convenience and accessibility by bike. It’s often crowded by the entrance, but empties out further down the beach. There are usually a few discretely topless sunbathers and a couple or two canoodling in the marsh grass; the first time I went, there was a man in a wetsuit snorkeling with his leashed dog in tow a few feet out from the shore. I’m not sure what he was looking at, floating facedown in the waist-high water—perhaps the thumbnail-sized hermit crabs, or the seaweed strings that lash themselves like malnourished sea monsters around your ankles. Despite the sharp-shelled sand, muddied water, and lackluster waves, this remains one of my favorite afternoon adventure destinations. –MH

DIRECTIONS: Get on the East Bay bike path in East Providence and ride for 7 miles. Turn right on Middle Highway, and then left on Nayatt Road. You’ll see the parking lot and farm building on your right soon after (look for the big RISD sign). If you’re driving, head to 231 Nayatt Road.

If you’ve seen Wes Anderson’s latest film, Moonrise Kingdom, you probably remember the underwear dance scene on a fog-filled beach (set to Francoise Hardy spinning on a record player nestled in the sand). That scene, and much of the movie, was filmed in in Jamestown, Rhode Island. Jamestown—located on Conanicut Island—is filled with rocky cove beaches perfect for running away to with your first love. The exact cove of the dance scene is located at Fort Wetherill State Park, which also boasts several other beach inlets and the crumbling remains of a 19th-century fort.         –MH

The secluded paradise of Beavertail State Park lies at the end of a delicate finger of land, sandwiched between Narragansett and Newport and pointing south to the open Atlantic. Paths plunge through dense vegetation to connect a lighthouse and seaside lawns with isolated sandy inlets, set into steep bluffs and accessible via vertiginous side trails. Adventurous swimmers can time the swells to scamper from the brine onto smooth bathing rocks at the water’s edge. Alternating between plunges into cold wild seas and gorging oneself on gourmet picnic foods has long been a storied Beavertail tradition. –SD

DIRECTIONS: The RIPTA 64 bus passes through the Jamestown town center, but it’s a 1.5 mile walk to Fort Wetherill from there, and even further to Beavertail—take your bike along with you on the rack at the front of the bus. Search “Fort Wetherill” or “Beavertail Rd.” to get driving directions to either state park—it’s about a 40-minute drive.

The 627 acres of Lincoln Woods are only a 15 minute drive from Providence, perfect for an early morning swim or quick afternoon hike. Olney Pond, a vast, shapely lake in the middle of the park, has a public sand beach, but I suggest finding a trail near the lake and walking till you find a rocky shore to jump off of. Get into the water, even if it’s cold. Swim out far, and tread in circles, appreciating the shore crowded with firs, maples, pines, and oaks, blocking out the rest of the world. Float on your back, belly-up in the sun. Breathe. –MH

DIRECTIONS: Bike north on Smithfield Avenue (RT 126) and take a left onto Breakneck Hill Road (RT 123); the park entrance will be on your left.

The 60 bus out of Kennedy Plaza plunged over rickety bridges, through Barrington and Bristol, to downtown Newport. From there, on a late July evening, it was an easy—albeit slightly damp, given the gently falling rain—water taxi ride across the harbor to Fort Adams State Park, home to a former naval base, sailboats, and, on this particular evening, the Newport Folk Festival. The heavens opened up even wider during the second opener, and everyone, including the band, ran for cover. But as the rain cleared and the sun came out, we looked out on the brick walls of the historic fort and the Newport Harbor with fresh eyes. Boats set out from the docks, birds took flight, and onstage Jeff Tweedy was singing “Christ for President.” –EW

DIRECTIONS: Take the RIPTA 60 Bus from Kennedy Plaza to downtown Newport. From there you can pick up the water taxi, walk to several beaches or pick up the walking path that winds along the famous Cliff Walk.

Among the blue-blood waves of the New-England near-shore, Block Island is a little oasis of weird. The second-weirdest thing on Block Island is the animal farm, a large pen on the edge of a bluff which houses a Himalayan yak, at least one one-eyed zonkey,  and a Scottish Highland steer named Mr. McDuff. The only thing weirder is the sacred labyrinth off Corn Neck Road, where a sign will tell you you’re supposed to walk in a spiral with your eyes closed, meditating on the question, “What are you longing for?” At the tapering sandy spit on the northern tip of the island, seals run aground by the dozen. If you move slowly, they may just keep you company during your picnic. –DS

DIRECTIONS: Head down early to Kennedy Plaza and take the 66 RIPTA to the Block Island ferry at Point Judith. Buy a round trip ticket ($23.85) and hang out for the day.

The candy bars at the General Store are as old as the lady behind the counter, the quahogs in freezers as questionable as you might imagine, but winter on Prudence is brilliantly blue and eerie. In March, when the population on the island averages 90 people, droves of seals give birth off the east coast of the island. Go for the seal watching, stay and explore the backroads. –VC

DIRECTIONS: Bike on the East Bay Bike Path or Bus (line 60) to Bristol. Ferry rides leave from Bristol every few hours to Prudence Island ($6, cash only).

“central falls to create first urban campground in the state”

hey hey you do you like sleeping outside well why

don’t you check out the

of rhode island and providence plantations

created in one of the poorest

a creative initiative and progressive too

support something in the city while sleeping

on an island with your friends

DIRECTIONS: Make a group reservation at www.centralfallsri.us/river-island-campground. The campground is 7 miles north up the Blackstone River bikeway.

Welcome to South County, a land of pseudo rural suburbs, wealthy Connecticut-style coastlines, and a lot of cars. Here public transportation comes in the form of two major bus lines, the 14 and the 66. If you can claim one of the two coveted spots on the bus bike racks, any road off the major highways is sure to be scenic, wooded, stunning; the environmental riches here are worth the hike.

My recommended route begins in historic Wickford village (home of one of the earliest European trading outposts in the area, Smith’s Castle), where RT 1A branches off of RT 1. This broad-shouldered and an aptly named ‘scenic byway,’ will take you down all the way to the first of the “big-wave beaches,” Narragansett Beach. Along the way, stop at the newly created John H. Chafee Preserve for some hiking trails and a stretch of coastline that boasts summer seal sightings. Also there are giant lily pads! The size of medium sized dogs, which bloom along the side of the road in late summer. –GR

The Desert of Rhode Island is waiting for you off Division Road in West Greenwich. The first sight of the sand dunes will inspire you to run up the soft, white mounds. Get to know the lay of the land, and when you are tired of exploring this desert, take a dip in the freshwater pond that lays to the right of the path on which you entered. You might be lucky enough to visit on the same day as two beautiful Siberian Husky dogs, which will certainly leave you feeling that this desert is too good to be true. Make friends with a car to reach this mysterious cranny of the state. –LC

DIRECTIONS: Take Exit 6 off of I-95, then turn left on Hopkins Hill Road. Make the first right onto Division Road. Drive about 300ft to reach the unmarked entrance, which will be on your left. There is a little gate.