The View From Hasbro Six 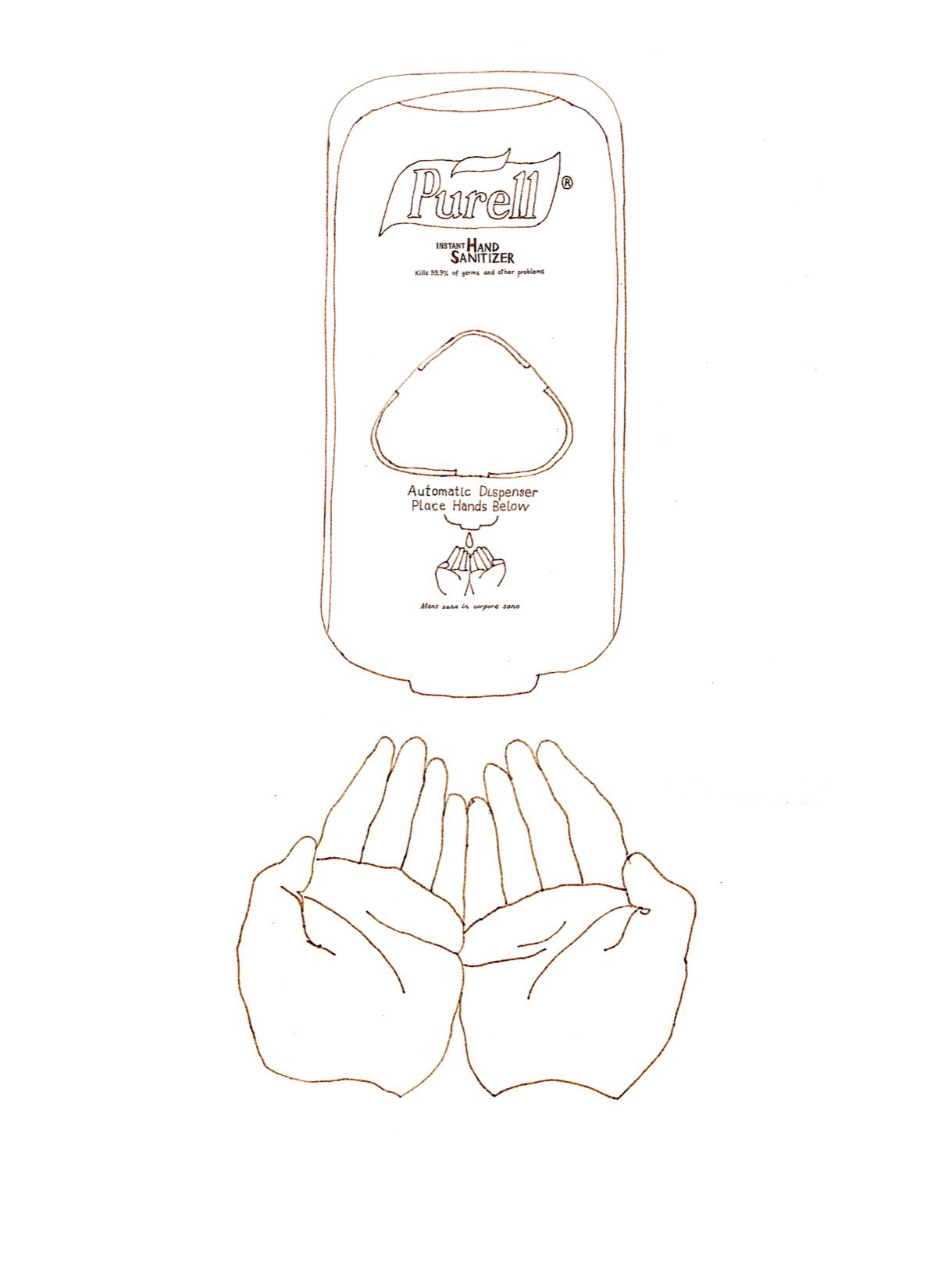 A click, a nasal robotic whir, and two more clicks—all crammed into one second. I’d recognize it anywhere, yet I’m not sure other people would notice it at all. It is the fundamental pitch in the soundtrack of a very particular period in my life.

I spent a week in the hospital when I was seventeen. It was less than a month before my eighteenth birthday, the last hurrah of my pediatric career. This was in 2012, well after the advent of Purell, and hand sanitizer dispensers were ubiquitous in medical facilities across America. There were some hospital info videos pre-loaded onto the little adjustable TV screen next to the bed. Early in my stay, I was curious enough to watch some of them. One was about standards of care; it encouraged patients to remind doctors and nurses to sanitize, should any forget to do so. One automated, motion-sensing dispenser was mounted on the wall outside the door to each patient room in the hospital—no medical professionals would enter a room without sanitizing first. These little hygiene nodes were positioned in such a way that I could hear the dispenser go off before the person who was coming to see me would come into view, rubbing their hands together as they walked. Whatever germs they had picked up elsewhere, they didn’t want to bring into my room. Thus, the sound of Purell dispensing heralded every medical event—the three times per day that my blood pressure was taken, the two psych sessions per day, the team’s daily rounds, meals1…

Being hospitalized was intensely boring. An aggressive amount of nothing occurred. My parents brought me my knitting kit once I was allowed to have some possessions. In the single week spent in the hospital, I knit a pair of socks, a pair of mittens, and a weird sort-of-beret hat. I love to knit, but I haven’t finished a project since that winter.

After the first day, I was also allowed to have a landline phone in the room—mostly it was so my parents could call me. I talked to my sister and my aunt, and several times to my best friend at home, and another friend in New York. The New York friend was disturbed by all the rules I had to follow. I’d been given hospital scrub pants to wear (no pockets, in case I tried to hide anything in them). The sink basin was covered over with tape, presumably so I couldn’t vomit into it in a fit of purging2. The bathroom door was locked, and I had to call a nurse to unlock it anytime I wanted to use the toilet. The nurse stood just outside the bathroom door until I was done, keeping an ear on me. It’s like they don’t trust you at all, my friend told me, offended on my behalf. I didn’t mention that I didn’t trust myself either.

There’s an urban legend3 that warns us against the overuse of Purell and other hand sanitizers, as that which “kills 99.9 percent of germs,” must perforce eliminate microorganisms indiscriminately, whether they are pathogenic or not. Purell is an alcohol-based sanitizer, not an antibacterial, meaning it kills microorganisms by disrupting their cell membranes, a process known as lysis—verb form “to lyse,” which gives us the name of Lysol products. Consider: an estimated 1000 species of bacteria, belonging to 19 different identified phyla4, live on human skin. Plenty of these species are not demonstrably harmful, and they either live and let live or actually benefit their human hosts5.

For doctors, it makes sense to kill off all microorganisms residing on their skin, rather than risk transmitting illnesses between patients or infecting wounds during surgery. But what about the rest of us?

In a 2013 essay in the New Yorker, David Owen charts the rise of Purell, noting, “you see it everywhere… My doctor uses it several times during every office visit. Cruise-ship operators squirt it into the hands of passengers as they enter dining rooms and buffet lines6,  and it’s become a staple at school picnics and birthday parties.” What makes us so willing—eager, even—to sacrifice beneficial bacteria at the altar of hygiene?

The simplest answer is convenience. It takes less time to rub in some Purell than it does to wash your hands, even though washing is still the CDC-recommended method for preventing diseases7. Plus, little Purell dispensers take up less space than sinks, they don’t get water on the floor, and they don’t require paper waste (paper towels) or additional electricity (hand dryers). The automatic variety doesn’t even require touching faucet handles, which themselves are likely to transmit germs8. And, yes, nine times out of ten, the collective ‘we’ will undeniably prefer the more convenient of two options.

However, the case for convenience doesn’t address the underlying impulse: what motivates us to wash (well, sanitize) our hands so frequently? What is so important about clean hands?

I note the stated purpose of Purell and other products like it: to prevent the spread of illness and contagion. If we sanitize frequently enough, we can avoid infecting others just as others cannot pass their sicknesses to us. Here I am struck by a symbolic parallel: if germs are problems, then germaphobia is a fear of other people’s problems becoming our own. And indeed, the world I see around me now reflects this interpretation—people everywhere so afraid that they will become vulnerable to that which affects others, squirting hand sanitizer into their palms over and over again in a desperate attempt to stay healthy, to stay safe.

In my room on the sixth floor, I felt safe. For months I had labored diligently to keep my issues to myself, swallowing them down with the copious amount of tea I drank so I wouldn’t feel hungry. The straight lines I so badly wanted to see in my body weren’t just aesthetic, weren’t even just gender. They were also limits, boundaries—floodgates that would hold back turmoil, prevent it from spilling out and inconveniencing those around me. In the hospital room, I was contained. It was a relief.

It was also an illusion. My methods of self-control were directly detrimental to my health, and they had caused significant inconvenience, not to mention worry, to my family and friends. My plan backfired, and other people had to deal with my problems. Interdependence was a fact I could not change through rigid self-discipline—or Purell.

I cannot help but think about the figurative meaning of the phrase, “to have clean hands,” to have done nothing wrong, to be guiltless. Could it be that we so badly want our hands to be clean that we are prepared to kill our (albeit microorganismal) allies to make it so? The name Purell itself is also revealing. We want to be ‘pure,’ to be in the right. The irony is that Purell and other alcohol-based hand sanitizers can remove germs but not dirt.  Hands that are soiled in the visible sense—be it with dirt9 or blood—cannot be remediated with a quick squirt.

I try to square this truth with the reflexive, nostalgic sense of security I still get every time I hear an automatic Purell dispenser go off. I know I am lucky, but I am not pure.

NICO SEDIVY B’17 is easily startled by loud noises.

1 Meals were a medical event because I was hospitalized for a restrictive eating disorder.

2 Ironic, given that I’ve never been able make myself throw up. I prefer to keep my nausea inside.

3 Apparently supported by a 2009 University of California San Diego research study, so perhaps not really “urban” or “legend.”

4 Phyla is the plural of phylum, a higher-order taxonomic grouping. For bacteria, phylum is the second most general categorization (only one step more specific than referring to them all as “bacteria”). According to a 2009 study in the journal Science, most of the bacteria that live on human skin belong to four phyla: actinobacteria (51.8%), firmicutes (24.4%), proteobacteria (16.5%), and bacteriodetes (6.3%). For those of you keeping score at home, “most” in this context is thus equal to 99%.

5 In the field of ecology, these types of relationships are known as commensalism (neutral for the host) and mutualism (positive for the host as well as the resident bacteria) and are a subset of symbiosis. As the child of biologists (and admittedly sometimes prone towards the pedantic), it has always frustrated me to see literary use of “symbiotic” to mean only “mutually beneficial.” I understand that it is only a metaphor, but it seems ill-advised to overlook that symbiosis also includes parasitism.

6 Ironically, one of the pathogens that is resistant to Purell and other alcohol-based sanitizers is norovirus, which is notorious for causing outbreaks of gastrointestinal illness on cruise ships.

7 If you are skeptical of the difference in time commitment (after all, I can wash your hands in a few seconds, so can’t everyone?) keep in mind that the CDC-recommended duration for handwashing is 24 seconds, or “long enough to sing the happy birthday song twice.”

8 The role of faucet handles as contagion vectors is one main reason that I am infuriated by public restrooms with automatic flush toilets and manual faucets.

9 One notable exception is dry erase marker residue, which is loosened by alcohol and then wipes right off.