When I Went to Freak Fest 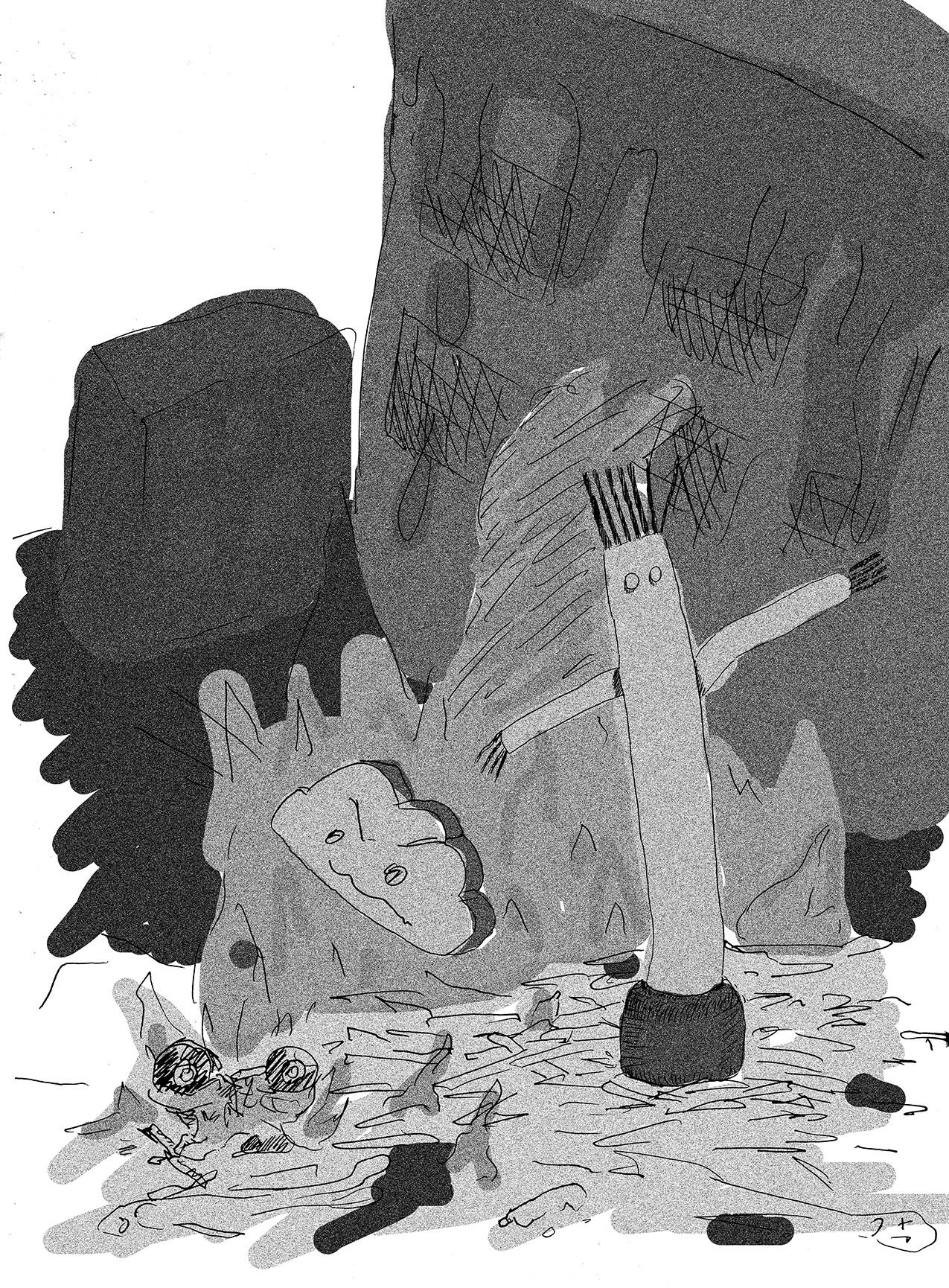 THE KIDS ARE BACK AT School or down by the river, hiding in the bushes and along the stone walls under the docks and bridges. After class, their limbs turn to jelly with little space-box electronics. That old Portuguese man who always slicks his hair back and rips around on his Rascal is taking the final laps of the year down to India Point Park with his woman on his lap. Soon the leaves will flop to gutters or streets or lawns and swirl around aimlessly for a while until they find their final resting place as a giant dam of organic matter clogging every storm drain in the city.

The city’s freaks are taking their last marches. On Saturday, they walked, drove, or rode their bikes to the block of Magnolia Street between Agnes and Troy in Olneyville for PUFFERSS, the Providence Underground Freak Fest Eco Rave Shaman Slam. Nestled between Olneyville and downtown Providence, the buildings on Magnolia Street are a planet of chain-link fences, brick walls, and busted windows. Last year’s fest, which took place one block north on Oak Street, was staged in front of a fiveor six-story building. Red paint dripped around the windows’ frames, making the building look like a big wounded monster, at its feet all sorts of creeps and fiends.

This year, my friend and I could hear the low thunder of Black Pus as we drove up Westminster Street. PUFFERSS, now in its third year, started at 2 PM and ended at 2 AM. We were late by about six hours. As we came past Oak, I saw that the building from last year had been largely painted over. The surrounding buildings wore the sort of community-sponsored inspirational murals that tell of rather than show the community’s flourishing arts scene. We entered the fest through a little alley lit up by a row of streetlights, around them bushes and trees pressed over the low tops of sheds and fences. I could see Black Pus’ stack of cabs behind his flailing arms and over a crowd of people nodding their heads.

Black Pus, the solo project of Lightning Bolt drummer Brian Chippendale, is a Providence staple. He and his friends were the driving force behind a brand of noise rock particular to the Providence scene, where live performances are felt as much as they are heard and screaming harmonics blow out your eardrums to conjure all sorts of phantom frequencies and distortions into a black hole of two-beat rhythms and skull compression. At PUFFERSS, Black Pus wore a loose cloth alien mask with a microphone pad sewn into the mouth so that its cable trailed down from his mouth. He also had synth patches that he triggered with his feet when he wasn’t focusing on running his double kick pedal. This way, he could scream whatever the fuck he said in his cackling howl without bothering to stop the constant flailing of his arms. I jammed some wax in my ears and moved in front of his triple stack of 4x4 amps.

PUFFERSS is unique among freak shows because it has two stages, with one pointing across the alley and the other running along it. As Black Pus finished, Bernard Herman stepped onto stage two. At that point in the show, he was a drag queen with long blonde hair. Behind the stage, a projector bounced the DVD Video logo onto a building, the image distorted by windows and corners and split by a big streetlight pole. Bernard Herman shouted Spoken Word style over spacey, pre-recorded drum and synth tracks. He was accompanied by an unnerving ventriloquist dummy that sang back-up vocals. Or maybe the dummy was Bernard Herman. I had a vision of Master-Blaster, with Tina Turner’s voice echoing, “Who runs Barter Town?” Midway through, Bernard dropped the wig and put on a flasher uniform, complete with nothing but black underwear under his trench coat. He performed a song about being “always on the job” in a “small town” with heavy implications of whoring. He kept saying “Bernard Herman” over and over until I was sure that the dummy and the goofy synths that sounded like ’90s kids’ game show music had taken over my brain.

The next act was Galcher Lustwerk, who provided a nice, danceable break. The audience was predominantly young males. The act was a little on the noisier side and consisted of almost exclusively drum machine percussion. A projector was showing weird home movies or Youtube videos or something.

My memory then began to fade into a cloud of incense and tinnitus. Daily Life was next: one part Ian Curtis, one part pro snowmobile rider. The lead wore a down vest, hair buzzed. “Come down with HIV / from getting your dick sucked for free... / Getting tested today,” he sang. The set ran way over. Container, the next band, tried to start, but Daily Life played on, laughing and saying, “One more!” With their final song, the laughter rose into a cacophonous chant.

Container fought for the stage, though, and their hard beats began to pound out of the speakers. Sparse vocals were recorded and played back, echoing around themselves until they decayed. The set was hugely danceable, and the assembled crowd was brought into a pulsating trance.

Then was Sewn Leather, with even harder beats and a rush of static in place of a snare drum. The singer shouted into the mic while turning knobs on a console, all the while an ethereal blue light from the console shining on his face. The sound cut out occasionally, but the crowd circled around the singer, rocking their shoulders to the web of delay and overdrive and reverb. The singer—with bleached hair, burnt tattoo skin, and a white muscle shirt— climbed onto the PA and leaned down to stare around at the crowd. He made eye contact for what felt like 10 seconds with each person before jumping to the ground and begging for sympathy.

I made my way to DJ Dog Dick. He rapped in Spanish, wailed lyrics until I thought he was gonna cry, and then made a face like a toddler who had sucked on a lemon and started yelling, “I’m a bitch!” Then the sound cut out. “I don’t know what’s wrong with this stupid shit,” he said. A basic kick fought its way back in, though, accompanied by bass synth, hat and block, and snare.

Finally, Lichens: just one guy, a drum machine, a synth, and a mic. The people in the front rows sat down for the soaring falsetto, which weaved over and harmonized with itself—at times almost operatic. The eternity of space-time vocals was finally broken by the entrance of an 808 sound with a shifting click track that eventually yielded to a minimal two-tone synth. The sound slowly grew into an intricate weave of three or four complex sequences lit up by the streetlights of the surrounding telephone poles. The top of every leaf was lit up, their undersides dark, and the kids behind me tried to pin down just how old they felt in terms of what bands they’d seen and when. Lichens finally brought their vocals back into the tapestry, creating a visceral wall of harmonics which cohered as completely as Black Pus had earlier torn itself apart. Both bands were like a big group tripping on acid together—hauntingly and almost nostalgically real—but Lichens a perfect and multiple unity and Black Pus an infinitely complex and terrifying chaos.

“This month is a diamond,” slurred the man next to me, who wore an Indiana Jones hat and said he was a shaman. “I don’t know if you want to write that down. That’s what September is. Everything is clear and you know—we all know—exactly what we need to do. Look at the moon! It’s so perfect and clear, right in the middle of those two trees.”

DAN STUMP B’14 cackles and flails.