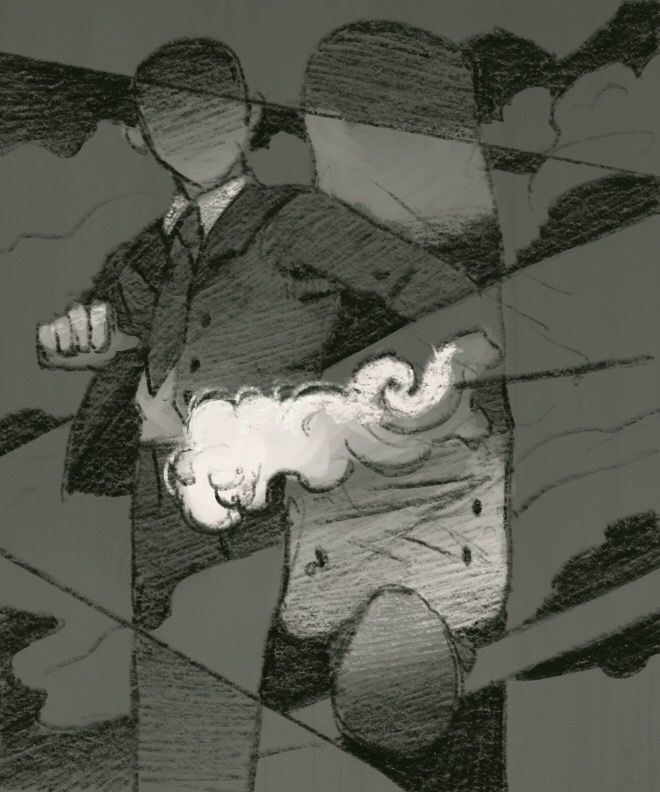 The trials of master illusionist Criss Angel have been manifold. He once spent 24 hours inside a phone booth-sized tank of water in Times Square. He has lain beneath a circle of randomly falling swords and correctly guessed which would descend in order to roll out of the way. On Friday, March 10, however, Angel was bested by something that gets the upper hand on all of us now and then.

It’s a common experience to feel like you have nothing good to wear, or to realize half an hour after putting on an outfit that it was completely wrong. The trope of the nightmare about forgetting to put on a pair of pants is indicative of the anxiety surrounding clothes. Consider the TLC reality show What Not to Wear, in which participants are nominated by friends, family, or coworkers as fashion disasters who have to be sartorially constructed by hosts Stacy London and Clinton Kelly. How amazing and sad—that what you wear seems so important to people that they might feel the need to stage an intervention.

Criss Angel, indeed, knows a thing or two about what not to wear. TMZ reported that last Friday, Angel was in the midst of a show at the Luxor Hotel and the theater was packed. His illusion involved being suspended upside-down in a straitjacket from which he had to escape. On this day, however, Angel could not get free, and after about ten minutes the magician passed out and was subsequently hospitalized. Normally, Criss Angel and straitjackets have a harmonious relationship. But on March 10, Angel was betrayed. His wardrobe staple, that garment for whom he had so much affection, and felt so much intimacy, sought to see him dead.

Angel, ever the rebel, checked out of the hospital that very night, against his doctors’ wishes, and performed again the next evening, successfully completing the stunt. It’s as if, one day, your favorite pair of jeans ripped in front of a crowd of people. The temptation might be to do away with jeans altogether. What you could learn from Criss Angel is that sometimes, the next day, you just have to put on another pair of pants. After all, it’s cold out.

It can be unpleasant to discover that a favorite pair of pants has become too snug. Perhaps they accidentally went through the dryer, or perhaps your body has changed. In any case, a good pair of pants often feels irreplaceable, so I have occasionally found myself struggling through the day in a too-tight pair, only to end up bloated and farty in bed, dreaming of looser days. A plane ride is a time when a tight pair of pants can be particularly uncomfortable—no room to adjust, strange fluctuations in internal pressures, unaccountable shifts in temperature. It is always an experience that has me reconsidering the skinny-jeans movement.

For Juan Carlos Galan Luperon, tight pants presented a much more serious problem. The Huffington Post reported that last Friday, Luperon arrived at New York’s JFK International airport from the Dominican Republic. In a press release, US Customs and Border Protection stated that, “During his examination, Mr. Luperon exhibited numerous signs of nervousness and his pants appeared to be rather snug.” In CBP’s typically invasive manner, they made Luperon remove his pants, whereupon they discovered the cause of the tightness: Luperon had flown with ten pounds of cocaine strapped to his legs, worth an estimated $164,000, for which he now faces narcotics smuggling charges. CBP then tweeted a photo of Luperon’s legs, wrapped around with lumpy packages of white powder, like a more potent Michelin Man.

I wish that Luperon had been able to find a looser pair of pants. I wish the CBP didn’t exist. The whole thing reeks of self-righteous law enforcement officers taking pleasure in humiliating others. So much more about them is tight: tightasses, tightwads, hearts two sizes too small.

March 9 was much like any other humid winter’s day in Miami, Florida. By 2PM, the temperature had climbed to 80° F. A bead of sweat dripped down the brow of lawyer Stephen Gutierrez, 28, as he gesticulated before a jury. His client, said Gutierrez, had in no way intended to ignite his car on fire—it must have combusted spontaneously. Thus, the insurance payments that the client had collected were not out of the ordinary. They were his due, as the victim of fiery circumstance. Gutierrez was building up steam, speaking more confidently. Then, as he spoke, his trousers began to smoke.

With a cry of amazement, he leaped for the courtroom door—only to return minutes later with a badly-singed pocket. No, he said. This was not a demonstration. Rather, the e-cigarette in his pocket had overheated, causing his pants to catch fire. The jurors, nonplussed, convicted the Miami-Dade resident Claudy Charles with second-degree arson, and filed out of the courtroom bewildered.

Much like a law degree, second-degree arson is no joke. This has not prevented reporters from seeing the irony of a blaze amidst an arson trial. Even fewer have missed out on the opportunity to invoke the sagely schoolyard rhyme, “liar, liar, pants on fire”—artfully performed by the Castaways in their 1965 hit music video, “Liar, Liar,” featuring red pants, a red guitar, and a mischievous closing wink.

Most commentators have also taken the opportunity to lament the dangers of e-cigarettes. This explosion is no anomaly in the world of techno-nicotine. The lithium-ion battery used to vaporize the pleasurable chemicals might fail at any time. Just what danger do America’s 2.5 million e-cigarette users face from failing batteries? “Literally, an explosion. A super-hot explosion,” said Dr. Anne Wagner of the University of Colorado Hospital Burn Center in a conversation with NBC. From 2009 to 2014, 25 e-cigarette users were injured by such explosions in the United States.

One aspect of the story has somehow eluded critique: the pants themselves. Nearly 100% of adults in the United States report to going about their daily business fully-clothed—most commonly in wool, cotton, linen, polyester, silk, and blended fabrics. All of these are flammable, with the exception of polyester, which is unlikely to ignite. However, if lit, polyester causes some of the worst burns. With all fingers pointed at the casual inhaler of electronically-superheated nicotine vapor, we must recall our own culpability as the only animals on Earth wearing combustible costumes wherever we go.