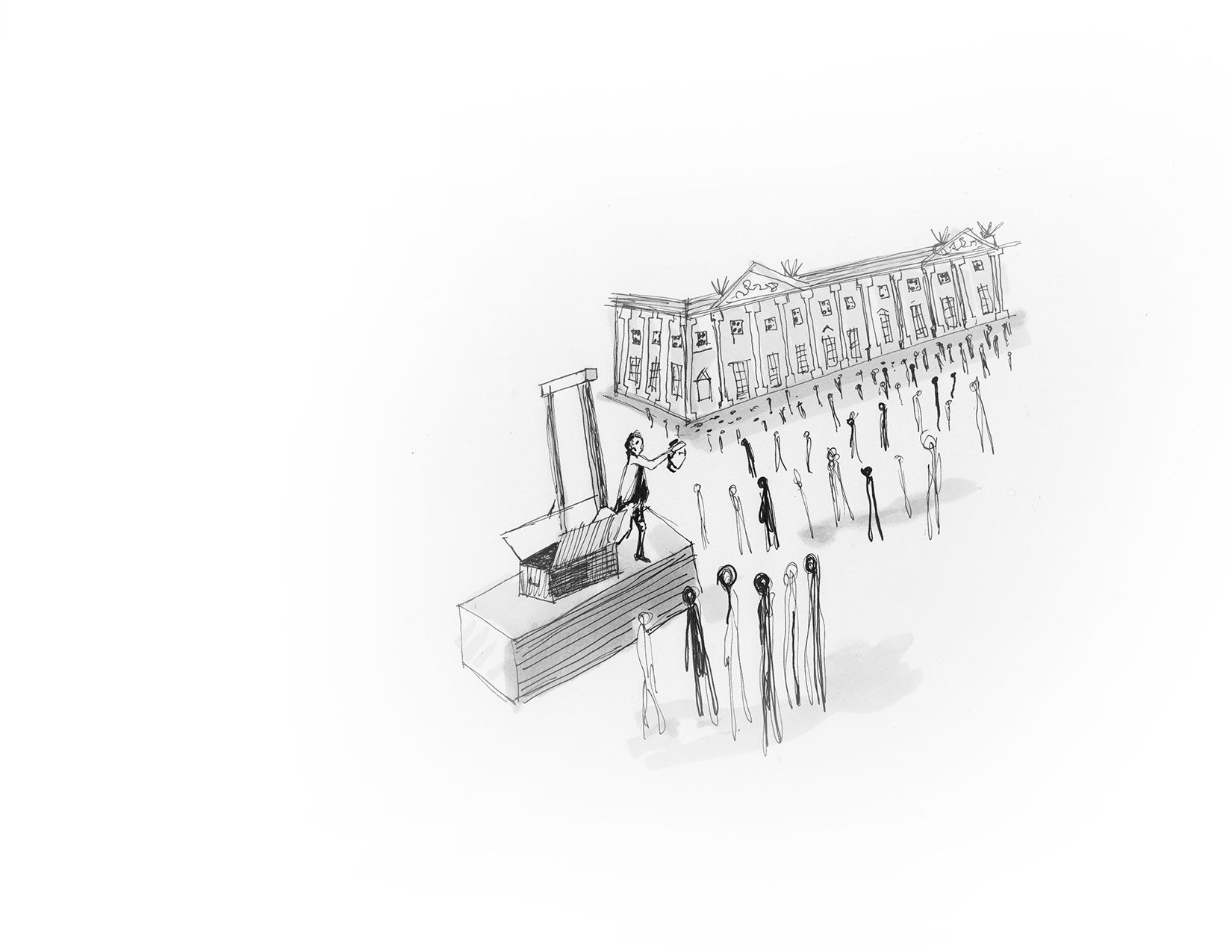 IN FRANCE, THE GUILLOTINE was unpopular at first. The slick blade didn’t give spectators enough time to see much of anything. Public protests gathered to restore the village gallows, and the revolutionary government was quick to respond. Within short time, Madame Guillotine raised her height to fourteen feet and encircled herself with a relishing display of freshly severed, aristocratic heads. The peasant protests quieted, Robespierre’s “Reign of Terror” ensued, and— 40,000 executions later—the French Revolution waned.

This isn’t the first or last time human beings, in fact, have taken pleasure in the suffering of others. We do it all the time. Our knowledge of the world grows, and with our growing intellect, an insatiable desire for the things we can’t have. It only takes a moment’s reflection to realize a pervading theme: It’s easier to hate than to love.

Schadenfreude, the German term for pleasure in the misfortune of others, is no longer just an abstract sentiment. That intangible feeling of resentment we shamefully harbor towards a friend’s life, luck, wits, or looks is real; the sinister sense of relief we experience at the expense of those around us actually serves us a biological purpose.

According to neuroscientist Hidehiko Takahashi and his team of researchers at Japan’s National Institute of Radiological Sciences, humans are biologically hardwired to reciprocally experience gain in another’s pain. To prove their theory, Takahashi and his team set out to find the neurocognitive mechanisms of envy and schadenfreude, and the role of social comparison in the processing of these emotions.

First off, it is not a surprise that the feeling of envy— the “emotion characterized by feelings of inferiority and resentment produced by an awareness of another’s superior quality, achievement, or possessions”—is a painful one (Takahashi 2009). After all, that twinge of heartache we feel inside when we see our ex-partner with an attractive new hubby is enough of an impetus to stay in bed all day; that hollowing “why me?” feeling we have when our co-worker gets the promotion over us is enough to convince us to quit the job entirely. But still, does the heartache and rejection underlying our feelings of envy actually hurt?

Takahashi and his team addressed this question by looking at prior experiments on the neural correlates of physical and social pain.  They found that when a person puts their hand on a burning stove, the anterior cingulate cortex, or ACC, lights up to process the corresponding physical pain of our skin blistering up (Eisenberger 2003). Coincidentally, in a recent study looking at the processing of emotional pain, scientists found similar patterns of activation in the ACC. After giving Tylenol to people who suffer from social anxiety prior to attending a crowded party, scientists noticed a reduced activation in the pain-processing ACC (Bailey 2012). So as it turns out, the distressing bitterness of envy we feel when the person sitting next to us gets a better score on an exam we studied for all week really does hurt.

But if the feeling of envy is analogous to the feeling of pain, what does pleasure in the pain of another feel like? Does schadenfreude also have a neural correlate? To answer this question, Takahashi and his team looked into the area of the brain that processes pleasure related to rewards: the ventral striatum, or VS (Fehr, 2007). For example, when a cocaine addict snorts a line of cocaine, the area of the brain that lights up as they satisfy their craving is the VS (Isomura, 2013). Schadenfreude does activate the VS, acting like an addiction none of us can shake off.

In the end, the sum of all of the findings in Takahashi’s research seem to point to one dismaying thought: Its natural propensity for human beings to sinisterly gaze at those around us. Perhaps we all have a hidden, diabolical core acidifying our soul, a center of ourselves waiting to betray us at the right time.

We would be lying if we claimed to have never felt the pangs of envy and the liberations of schadenfreude. After all, the more we look to those around us for guidance, the more we self-scrutinize ourselves and realize our shortcomings.The more we engage in the effort to assess our self-value in some hierarchy of existence, the greater our fascination with seeing other beings falter becomes; The more we witness other people mess up, the better we feel about ourselves. We may sometimes manage to convince ourselves that we don’t desire a loving partner to hold us at night, or that we don’t wish we thought of that discerning tweet first…but then we remember that we do. The feeling of insouciance lasts for all of a second, and the residual guilt lingers on.

We have been taking a look at the depravity of man, and it is a sight which may well fill us with horror. But now we must cast our eyes on the misery of his existence; and when we have done so, and are horrified by that too, we must look back again at his depravity. We shall then find that they hold the balance to each other [and] we shall perceive the eternal justice of things. (Schopenhauer 21)

Every person falls victim to the pain produced by social comparison, but perhaps every person strikes a homeostatic balance when they realize that everyone messes up. It’s liberating to know we aren’t alone in our suffering; it’s rewarding to acknowledge that we’re all climbing a slope of uncertainty. At least we can use each other as our crutches.

GOLNOOSH MAHDAVI B’14 is waiting to hear some of your nasty thoughts.