ProvSlam and the next generation of youth poetry 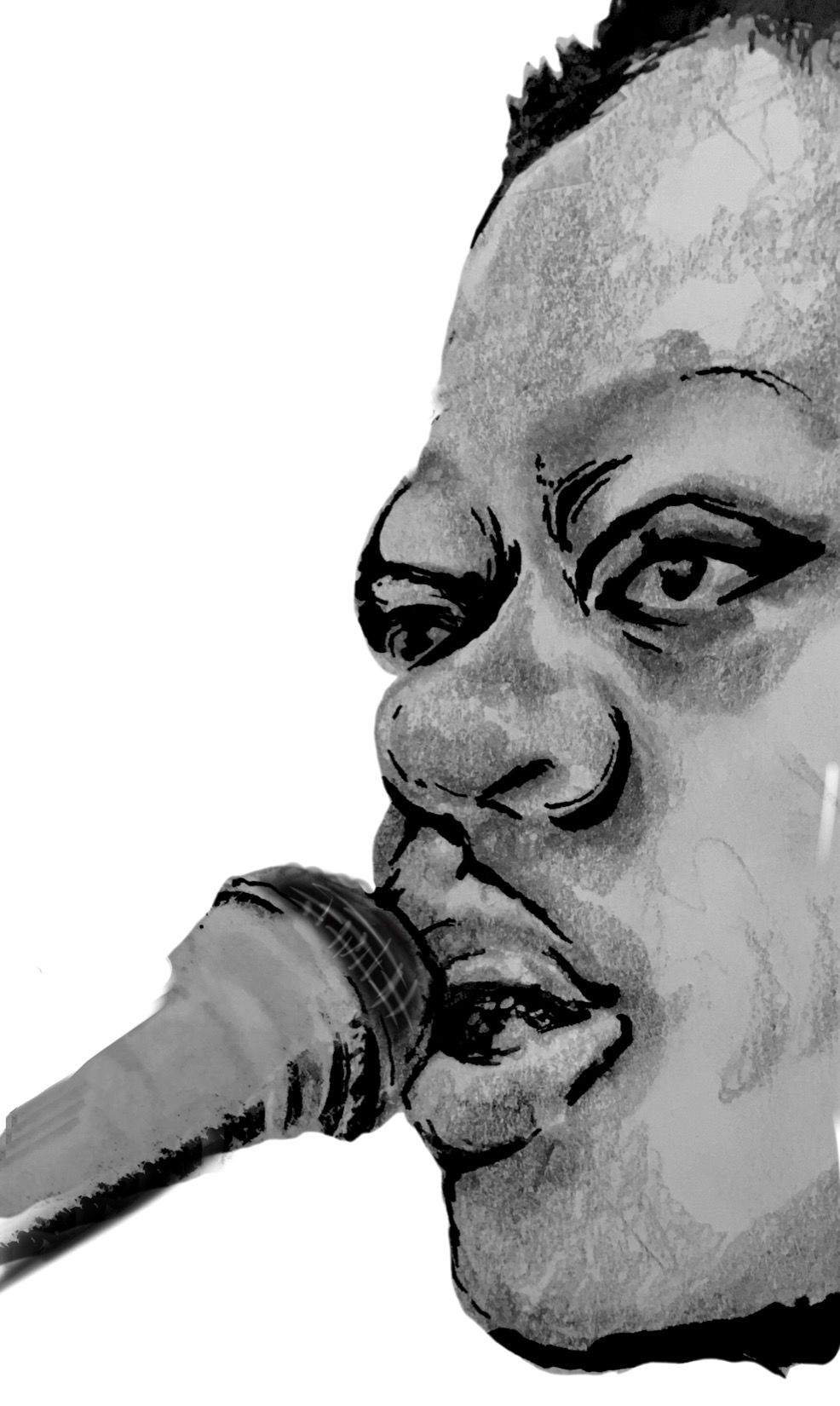 “I’m so excited, and you should be too.” Cutting through the animated flow of chatter, Charlotte Abotsi, the master of ceremonies and co-director of Providence Slam Poetry (or ProvSlam for short), passionately sets the tone of the evening. The subdued décor of AS220 and a comparatively invigorated audience provided the backdrop for the Youth Grand Slam Final on February 16, 2017. The slam elects five youth poets (19 and under) each year to represent Providence at Brave New Voices (BNV), an international youth poetry festival. Set this year in San Francisco, California, BNV serves as a space for artistic growth and collaboration for youth poets from 72 cities across the world. In Charlotte’s words, “It’s a big fucking deal.”

Although only five out of the eight qualified performers would move on, beneath the competition lay a more powerful element of camaraderie and community. “Ultimately, we try to harness the underlying competitive energy into collaborative energy, so that the space stays rooted in our shared love of writing and fosters growth over typified notions of success,” says Muggs Fogarty, another co-director of ProvSlam who has represented Providence seven times in slam festivals throughout the nation. Overseeing this election process are five random individuals from the crowd who serve as judges and who score each performance on a scale from 1.0-10.0. According to the ProvSlam website, judges must “not know any of the competitors personally,” and “[have] a pulse.”

Addressing the arbitrary role of the judges in her introductory remarks, Charlotte encouraged the crowd to be the real judge. She explained, “the judges ain’t shit. It’s up to you to sway the fuck out of the judges with applause and with love.” She quickly backtracked, adding, “just kidding, everyone is great.” The audience accepted the challenge, greeting every poet with shouts of encouragement and groans of disbelief at the judges’ scoring. The crowd’s distaste for the judging process while light-hearted, points to the challenge of the evening’s task: selecting a team of five to go San Francisco.

Originating in the mid-1980’s from the work of Marc Smith in Chicago, Slam poetry is considered the artistic descendant of jazz, hip hop, and beat poetry. Seeking to separate himself from the insulated world of academic poetry, Smith thought that poetry should be performed, rather than merely read. Smith’s theories of competitive performance poetry influenced communities across the nation, including in Providence. Jared Paul, founder of the Providence Youth Slam in 2002, recalled to the Independent how “Patricia Smith, one of the most famous spoken word artists...and Mike Brown, who were on that Boston team that represented Boston at nationals at the first time, came down to Providence to get the poetry reading started here––the First Poetry Slam.” After their founding in 1992, the Providence Slam Team went on to win the National Poetry Slam in ‘96; ProvSlam has remained an integral part of the national slam poetry scene ever since.

ProvSlam works as a platform for historically marginalized voices to engage in a public discourse through the lens of poetry and storytelling. In their mission statement, ProvSlam self-identifies as a community that “values respect and safety for all who enter our space, a diversity of voices, courageous engagement with language and truth, exposing silenced narratives, and supporting one another along the way.” The audience at AS220 reflected this intended mission: the youth that occupy the community, both at the Slams and through the organization’s workshops, use slam to make their voices heard on a number of issues—the significance of which are certainly amplified in this time of cultural upheaval and renewed political oppression. Each year, the ProvSlam community forms a delegation to represent Providence at a number of slam poetry competitions. At the February slam, everyone had the BNV on their mind.

For those who had never been to a slam before, Charlotte explained that “we never start a slam without spilling some motherfucking blood.” This, of course, refers to the sacrificial poet round, which is intended as a reference point for judges and opens the official performances for the night. This evening’s sacrificial poet was last year’s Youth Grand Slam Champion, Sin Seven, who delivered a powerful indictment of America’s history of anti-Blackness by relating how the “slave house [has] turned to public house and slave ship [has] turned to prison bus.” Lines with this sort of resonance are met with passionate applause, snaps, claps, drumming on chairs, stomping on the ground, and vocal inflections. “Emmett turn to Rodney and now Rodney turn to Michael, they’re the same people they just got beaten at different times.” Yes! Oh! Come on! Wow! Woo! Perhaps the most visible element of continuity this evening was the call and response element of the poems, as poets and audience members fed off each other’s energy. “It’s always high energy,” says Alyssa St. Franc, a BNV team member this year, “you hear snaps, claps, people will moan, things like that. So it’s like a back-and-forth type thing so the energy is always like the audience is always alive, or like there’s always a reaction, whether it be good or bad.” In a break from normative performance, the poet and the audience feed off one another’s energies, adding to the sense of collaboration in the room.

Following Seven, who was joined by other BNV alums, the slam was split into three rounds, each featuring all eight poets. Methodically, poets came on stage and performed their original work. “It’s very bare—just you, your poem, and your body,” Muggs says. In response, Alyssa noted the importance of audience involvement, explaining how, “when you’re up there, and you’re like oh my god, I don’t know if someone’s going to like what I’m saying, and then they react as you’re reading it, it gives you like the power to like—it gives you the power to keep going and be better.” Indeed, poignant moments were most often derived from this sense of call and response. For example, in the final poem of the night, the future Youth Gland Slam Champion, Blessed Sheriff, opened energetically, “To the man-bun-wearing, no-shoes-hippie who said he only dated Black girls.” Met with deafening applause, Blessed’s performance could barely be discerned amid the wave of positive feedback from the crowd.

While a few poets appeared nervous, the more confident ones soared over the muffled music from the next room over. Some chose to perform their work in a style influenced by rap, others embodied a slower cadence, drawn out, each word decided. Such stylistic differences, says Alyssa, work within the collaborative environment to motivate the poets to push their limits. “Hearing other people’s styles and how they write and how they perform is really influential and helpful because you’re just like, well, I don’t know what else to do... So I mean just seeing other people do it, it’s the same thing, they just do it in different ways. And that’s part of what makes it really special.” This shared experimentation Alyssa refers to works to demystify the slam, allowing new performers to learn from the community as they enter in.

“Young people have to exist within a funny predicament of living highly regimented lives with little-to-no autonomy,” Muggs says. “Like having to raise your hand to go to the bathroom while also being expected to make incredibly difficult decisions about life and self. So, having a place that is safe, that encourages expression without censorship, provides mentorship and collaborative opportunities, becomes an essential part to helping young people to start articulating and realizing who they are and who they want to be.” In this articulation of identity, such themes of experimentation with content and form rise to the surface of the ProvSlam community, as poets seek to balance their role as students with their creative lives on stage.

After an evening of celebrating each competitor’s poetic voice, the five ‘winners’ were chosen—the first ever delegation, says this year’s coach Chrysanthemum Tran, composed entirely of “all Black and brown girls” from Providence to be sent to BNV.

Though the judges final decision was a reminder of the competition at hand, the poets felt supported either way. The moment was no longer about those who would take a plane to California, but about the more powerful themes and stories shared by performers and absorbed by the community that night. After the team was announced, the winners and losers were hardly discernible in the crowd, as every poet congratulated each other and interacted with the same sense of camaraderie they shared before the competition. When asked about the importance of the space ProvSlam cultivates, Muggs explains that “youth cultural production is always going to be at the forefront of any chosen [artistic] medium. It’s always going to be the youth who are making the most radical critiques and who are going to expose and articulate best the nuances of any current political/social climate. Personally, I think this generation is the most fearless, queer, intersectional, hilarious, and loving that I’ve been able to witness.”

CHRIS PACKS B’20 encourages you to donate to the BNV team’s travel fund, linked on the organization’s website, provslam.org