On the history of custard 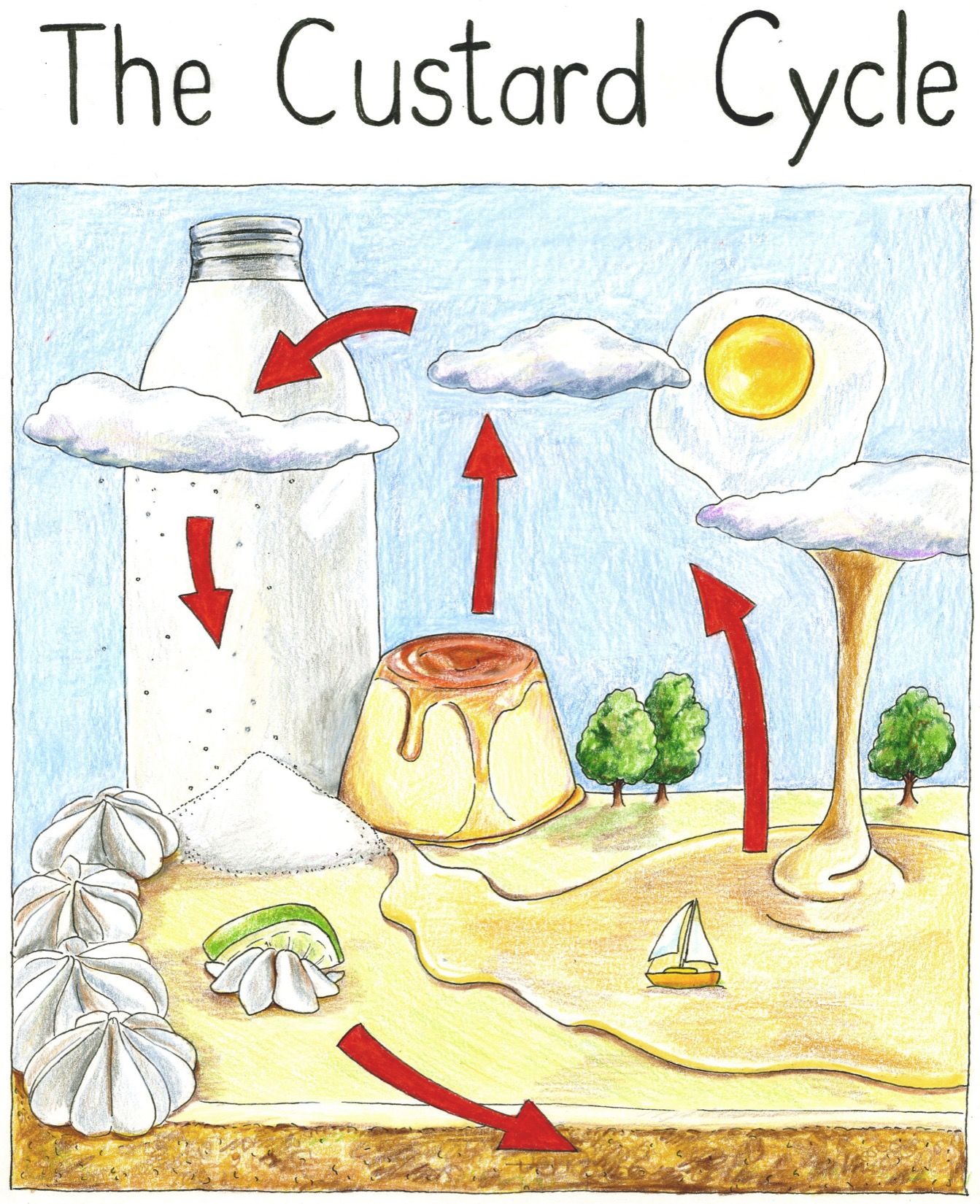 The first flan I ever ate was served with a glass of Pepsi. The grown-ups had coffee and my aunt, who made it, probably had a cigarette, too, as I would learn after her death. I was not prepared. Wobbly and biological, the flan revealed pale flesh under its caramel tan. In memory, it is huge. In actuality, it was likely no bigger than the standard cake pan in which it was baked, nine inches in diameter.

I remember kneeling on a kitchen stool to get a closer look at the custard on the counter. It was a hot day and the flan was cool. It sweat. I’m not sure what I expected, but I didn’t want to take a bite.

The first time I ever made flan, an incident involving salt (too much of it) led to my custard’s demise. Unaware of what was to come, I felt hopeful when it was time to pull the pan out of the oven. The custard looked like flan and it wobbled like flan. Unmolded, it could have been a stock photo, but you couldn’t really eat it. Though it was certainly custard, it tasted more of salt than sugar and its existence was short-lived: post-taste test, it became trash.

Custards, in their essential form, taste like what they are, nothing else. Their chemistry is specific, unparalleled, irreversible, and, as I can attest, easily unbalanced. This is their appeal.

What constitutes a custard? This question has a chemical answer and it’s involved. The key ingredient is egg. Beyond that, the chemistry requires only liquid, some of which must be water, and dissolved minerals (salt is traditional). From the gustatory position, you’ll want milk and sugar, too, if sweet is your goal. The ratio between ingredients is where the finesse comes in. An accomplished custard is as delicate as it is delicious (‘silky’ is the typical adjective used).

Fats, carbs, proteins, water, and salt: it might seem that you can’t go wrong. The devil, here, is not so much in the details as it is in the proteins. The first thing to know about proteins is that they are complex and easily upset by the application of heat. They have a tendency to snarl and get all wound up, or else to unfold and cling to each other. A custard needs just the right kind of treatment to achieve its ideal consistency. Too much heat leads to ruin: a rubber-like texture. But too tepid a heat will leave you with an undercooked soup, a desirable outcome only for sabayon.

You can’t be timid, you must be slow. Sugar is helpful. As heat denatures the proteins in the eggs, their architecture falls apart. Slow heat prevents the denatured proteins from clinging to each other too hard, too fast. Sugar gets in their way to the same effect. And there are other methods, of course. A water bath for a baked custard limits heat transfer in the way that water can be relied on to do—its boiling point serving as a road block for the heat. A double boiler transposes this method to the stovetop. Equally good is stirring over low heat with care, unless care is asking too much of the cook.

The custard in Key lime pie is foolproof. Made with egg yolks, sweetened condensed milk, and the juice of Key limes (or not, as the case may be, seeing as any lime juice will do), the filling of a Key lime pie does not need any heat. Stirred, it will thicken of its own accord. The acid in the lime juice denatures another set of proteins—in the condensed milk, this time—causing the filling to thicken. No sugar is added as no more is needed (condensed milk is full of wonders). Some salt may be welcome. Eggs are ancillary.

Invented in 1853, sweetened condensed milk has long been a problem solver. The story goes that a dearth of fresh milk on a transatlantic voyage spurred its creation. Without pasteurization, fresh milk doesn’t last. Gently heated, with sugar added to fox bacterial growth, sweetened condensed milk has no such restrictions. Any expiration date is a suggestion, not a condemnation.

Today it’s just another commodity, an unhealthy one that’s spurred lowand no-fat versions. But once, condensed milk was a wonder that was even adopted as rations by Union forces during the Civil War. More decadent than any modern day MRE (meal ready-to-eat), the military’s high energy equivalent of a Lunchable, a single can contains easily more than one thousand calories, making it wholesome by wartime metrics. Its connection to soldiering gives a sense of the stakes of condensed milk (they’re high). A means of survival, it stabilizes both diets and pies.

In a custard, sweetened condensed milk adds the legacy of its consumption: its usefulness for health and for war, for longevity, for being a quick fix. Incidentally, the easiest way to make dulce de leche is to cheat: boil a can of condensed milk for a few hours. (The only downside is the risk of explosion.) A Key lime pie is no uncomplicated thing: it’s a tasty iteration of a nineteenth century canned commodity. The convenience in the custard is bound up in bonds more complex than chemical ones. Yellow, zesty, and cool, Key lime pie is a custard with a demonstrable history. Eating a slice, you consume a thing more subtle than its graham cracker crust would suggest. Only in comparison to a less sweet custard reveals the taste of canned convenience that comes of storing milk in sugar. Comparison, though, is different from consumption, and in the case of Key lime pie let there be no doubt which counts.

What’s a custard without eggs? As atoms are to matter, so are eggs to dessert. They are the seeds of things, generative and essential. Without matter, void; without eggs, pudding. Only in Britain is a pudding a custard (and there, a pudding can be seemingly anything).

Pudding is perhaps the most convenient custard there is. A small box yields a paper packet from which the powder is poured into a pot. Add milk, heat, and stir. Cool. What comes out—unless you take issue with the thin film of coagulated milk proteins that tends to form on top of pudding—is perfect. Smooth, viscous, and sweet, boxed pudding may also taste of modernity and labor saved if you’ve already had the experience of making a proper custard. Originally a clever fix to the problem of egg-allergies (specifically those of Elizabeth Bird, whose husband, Alfred, invented boxed pudding for her), it has been reproduced in households all over and has since lost the context of the problem it was designed to solve. More recent ‘homemade’ puddings call for eggs, for cream, for the whole nine yards. The point is lost. The final product becomes a custard adulterated with cornstarch and thus blunted in flavor.

Chocolate pudding is best. Other varieties are pale imitations. Without cocoa powder, a suspension of sugar in swollen starch granules is no one’s friend. Where chocolate pudding is decadent and homey in the same bite, other puddings serve up weak flavors better suited to more delicate entities like the custard. Consider: vanilla pudding is just a heap of cornstarch and sugar with only (likely imitation) vanilla to give it a reason for being. Weak tea, indeed.

It is said that the proof is in the pudding because it is so. Put a custard to the test: if you can walk on it, it is surely pudding (google it). Miraculous though this may seem, pudding is merely a non-Newtonian fluid (at least until it’s well-cooked, anyway). Oobleck plus sugar, it can solidify with the application of force. Custard is less terrestrial. If it supports your weight, there’s a problem.

The last flan I ate was a flan de coco, a Puerto Rican custard made with coconut milk, hence the name, as well as some combination of condensed, evaporated, or fresh milk. I was at a different aunt’s house and there was no Pepsi. I had coffee, which is to say that I was no longer quite a child. I was large and the flan was tiny, baked in a disposable aluminum pan. My portion was a rectangular prism no greater than half a cup in volume. There were no seconds. What remained went back in the fridge, the better to savor it. I don’t know what happened to the rest.

JUAN PATRICK SOTO B’17 is letting it set.