Body Worlds in the twilight of storytelling 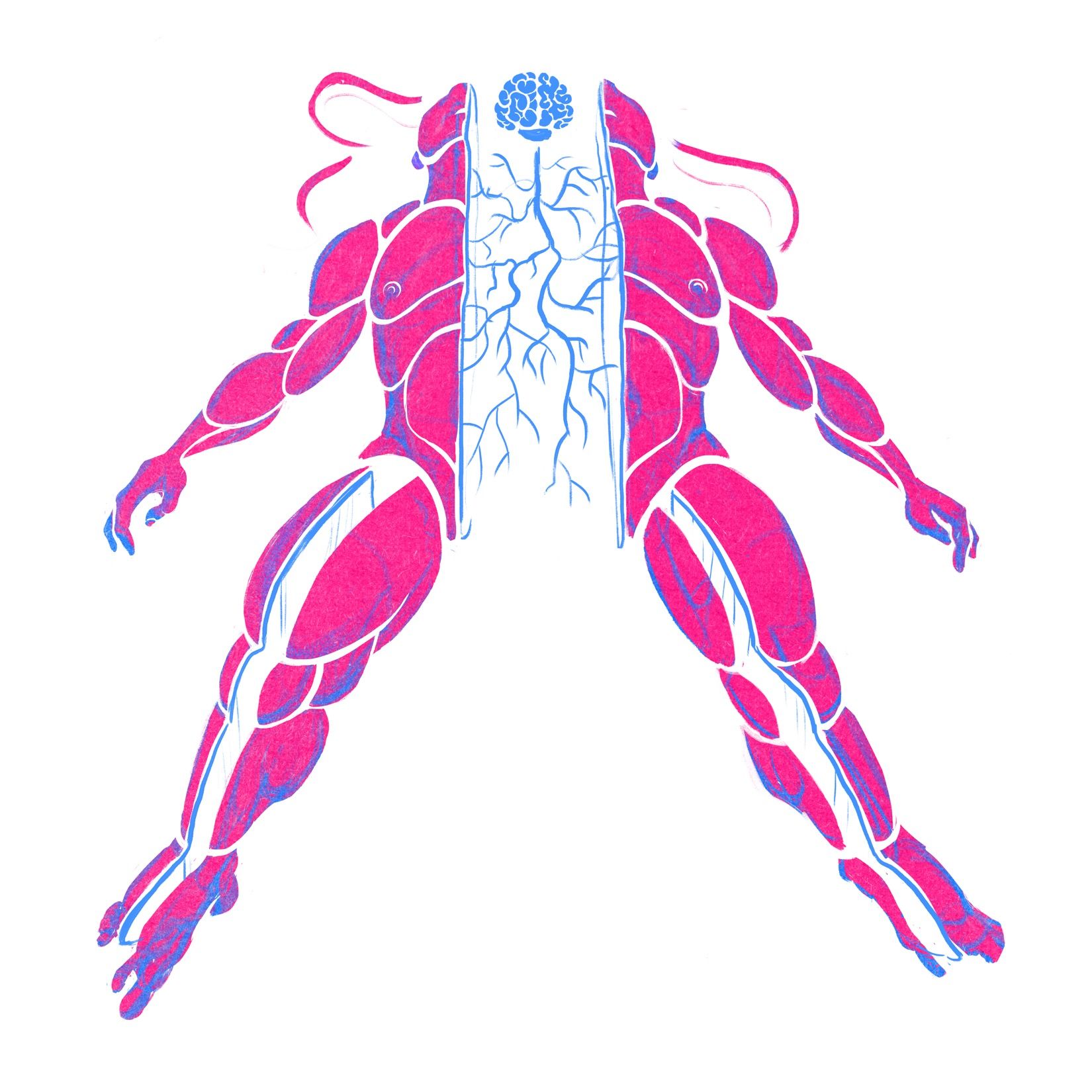 “Love-hate for the body colors the whole of modern culture. The body is scorned and rejected as something inferior, enslaved, and at the same time is desired as forbidden, reified, estranged. Only culture treats the body as a thing that can be owned, only in culture has it been distinguished from the mind, the quintessence of power and command, as the object, the dead thing, the corpus.”

You may have seen it on a pamphlet. The exhibition opens with the image of a human body—its back arched, feet pointed, arms outstretched, head raised, as if it were ascending into the heavens. Yet this angelic body has no skin. Atop a beige panel that spans from floor to ceiling, illuminated from above against the matte black walls, the body adorns a welcome note to the visitor. The panel explains that the exhibit “celebrates the living body in its optimal state—healthy, vibrant, vigorous, and in motion. It presents the leading health concerns of contemporary times, and the causes for these conditions and diseases and ways to prevent or manage them.”

Body Worlds: Vital, on display at the Providence Convention Center last fall, presents real corpses. Arranged and variously contorted, the bodies, isolated organs, and full anatomical systems are preserved through a process called “plastination.” The process dissolves a cadaver’s water and fat content, and replaces them with liquid polymers that allow the body to be arranged and hardened into any position, ready for display.

Since its founding in 1995, Body Worlds has been troubled by legal and ethical controversies over their display of real bodies. The audio-guide for the exhibit, responding directly to such criticisms, compares the exhibit to religious traditions of collecting and displaying human remains and relics:

“Many Catholic churches… still have piles of skulls and bones stacked up wall high in their old charnel houses. Ancient Egyptian mummies are also on public display in many museums, and quite rightly so, since they provide insight into the worldview and religion of an ancient sophisticated culture. The plastinates shown here should be viewed in a similar way—they are intended to advance medical and anatomical research while allowing a broader public to gain an insight into the human body.”

Body Worlds: Vital, however, is different than a tomb or charnel house, and there are important ethical and political questions about the education it provides. By presenting life and death through a detached, anatomical frame, it betrays a rupture in understandings of the body, produced by a shift from storytelling to ‘pure’ information.

Entering the exhibit, the visitor passes a series of vibrantly painted torso molds, seemingly made from plaster or ceramic, of nude human bodies of different shapes, sizes, and sexes. The casts are imprecisely detailed, painted in blues, silvers, and golds. As ornaments they lack the anatomical plaques that accompany the remaining objects. They are presented as inconsequential works of art rather than legitimate objects of scientific knowledge. The sign accompanying the casts reads: “Whatever type of body an individual has, the core essential for a functioning body is physical health. While we cannot naturally change the essential structural frame of our body, we can strive for vitality and physical wellbeing.” The ornamental casts seem to stand for the inessential, experiencing subject that is separate from but dependent upon its anatomical, purportedly universal ‘essence.’ Worldly phenomena are framed as data for the body, the sensory information encountered by a biologically bounded individual, rather than complex stories that require interpretation and might open up new ways of understanding the body.

This biological essentialism is replicated by the types of knowledge foregrounded in the exhibit. By presenting the body through an absolutely anatomical frame, the lived experience of embodiment is bracketed entirely. The visitor is provided a plethora of facts and information about various bodily structures—information that, while interesting, can simply be fitted into a  pre-formed conception of the body. There is a marked absence of personal narratives, the kind that might require interpretation or contain counsel for a viewer’s ongoing bodily considerations. As the body is reduced to an anatomical essence, knowledge is stripped of paradoxes and loose ends, presented in neat, ostensibly neutral explanatory frames. This becomes more true as the visitor progresses through the numerous plastinate displays.

The “Skin Man” display shows the full muscular structure of a man in a triumphant pose, holding his skin—which has been stripped from his body in one piece—out in front. The display dramatizes one of the foundational ideals of the exhibit: that the body can be undressed into neatly isolated elements and microscopically inspected. In the “Totally Expanded Body” display, this microscopic ideal is taken to its limit. One body is separated into all of its constituent elements, perfectly spaced out from one another. According to the audio guide, “this view allows a virtual journey through the body.” The expanded body is a total dissection: every anatomical component of the body revealed, every detail brought to light for inspection by the visitor. The “virtual journey” that this allows might exceed the metaphorical; in this exhibit, the body is virtualized, converted into an informational model that simulates the reality of the figure.

In the “Mat at Leisure” display, the major nerves that stem from the spinal cord are organized as if in a reclined position. The guide explains, “this network with the brain and spinal cord makes up our nervous system and allows swift exchange of information. Each part has its own task: the brain is like a control center, the spinal cord a router, and the nerve fibers form the connecting cables.” This metaphor reduces experience to always already pure data, algorithmically processed rather than worked through and interpreted.

If the exhibit is representative of an increasingly dominant framework for bodily knowledge, then it is essential to understand and interrogate the political stakes of this trend. These plastinate displays can be understood as an expression of the social fetishization of information that devalues wisdom gained through embodied ways of knowing, ones which may never reach a quantifiable end. It attempts a conceptual mastery of the human through the preservation, dissection, display, and illumination of the anatomical. In this absolute paradigm of Body Worlds: Vital, experience is excised from the body, stripped to pure information, eliminating all interpretive space.

Death has been removed from the perceptual world of the living. Once a public event, the contemporary medical system has organized death into hospitals, hospices, sanatoria, and morgues. If the dying today are hidden from sight, it seems bizarre that the properly dead are instead trotted out on display. Yet by removing, as much as possible, the biographical information that would lend these bodies any concrete identity, the bodies are abstracted from the event of death. Through a technological necromancy, the bodies are symbolically resurrected. Immobile zombies, they stand in for the biological functions of the living. Rather than providing an opportunity to grapple with death, the bodies in the exhibit—in their presentation as pure information—serve in fact to drive death even further into the shadows.

This social annexation of death poses a potential danger. In Body Worlds: Vital, as in so many modern spaces, information and data are framed as inherently objective and neutral. This image can and historically has served to mask pernicious political ideologies. Reflecting on understandings of the body in World War II Germany, Max Horkheimer and Theodor Adorno note:

“Those who extolled the body in Germany… [saw it] as a mobile mechanism, with its hinged links, the flesh upholstering the skeleton. They manipulate the body, actuating the limbs as if they were already severed. The Jewish tradition instills an aversion to measuring human beings with a yardstick, because the dead are measured—for the coffin.”

Towards the end of the exhibit, a blood-pressure monitor—with clear instructions for visitors who wish to use it—accompanies a display about diet and obesity: a yardstick par excellence. This calculative reduction of life to information, which today conceals the dying even as it exhibits the dead in glass coffins, will not always protect the living. We need more than just anatomical diagrams and biological optimums to care for the health of the body politic. Stories, experiences, and mythologies of the body which generate uncertainty—posing more questions than answers—may perhaps be a vital antidote to this informational paradigm.

ROBIN MANLEY B’18 spent too much time staring at corpses.