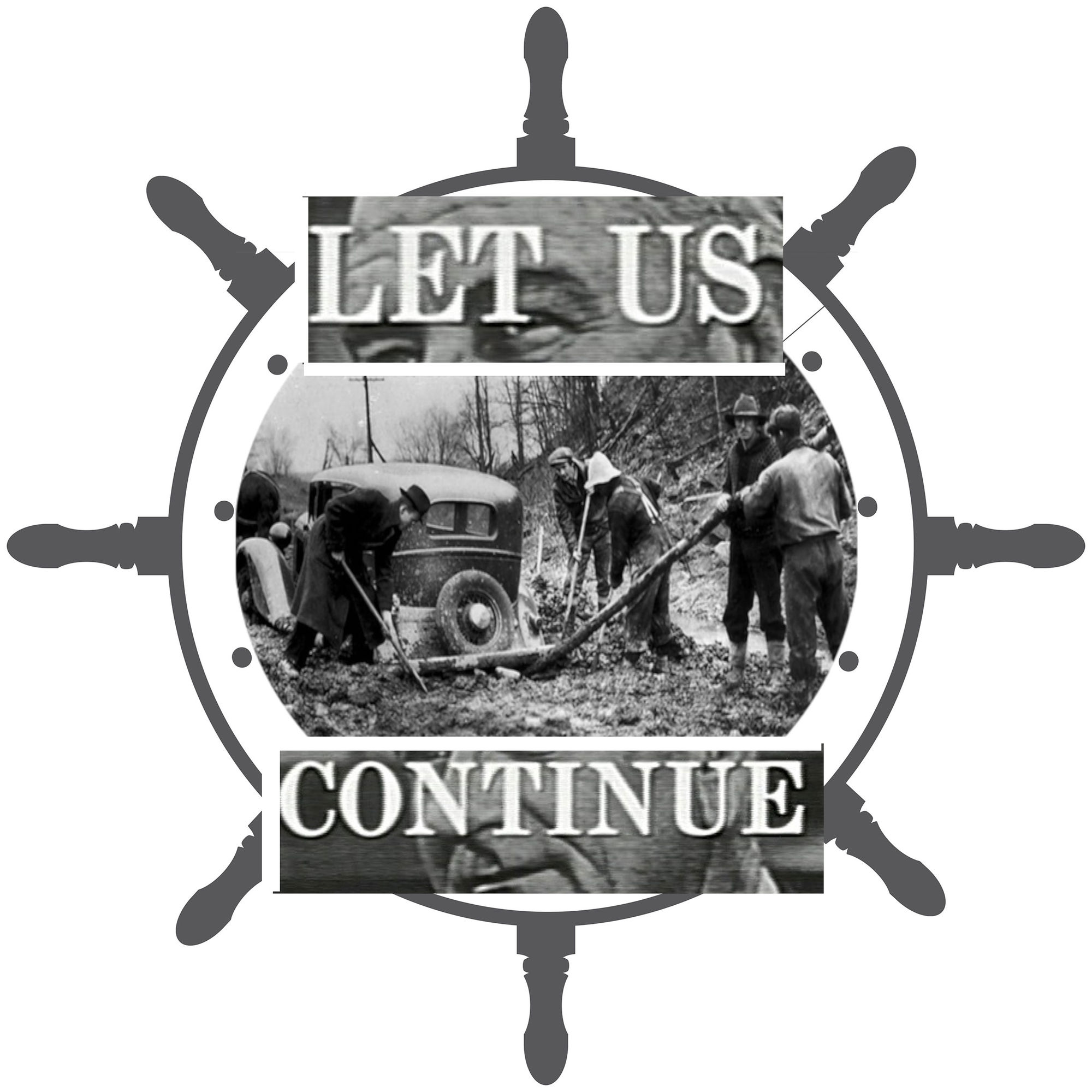 It’s an august afternoon, sometime in the 1960s. Robert Schenkkan and his older brother are standing in the hot gravel driveway of their family ranch in Austin, Texas. They are watching their father—a former serviceman working for Austin’s public television and radio station—speak with another man, a tall, inelegant figure wearing a cowboy hat and some fine western threads. Schenkkan’s father’s car is stuck beside the driveway, and the tall man gestures to it. His motions are ungainly but deliberate. His massive silhouette moves toward the station wagon and, putting his shoulder to the bumper, he slowly begins to ease it out of the ditch.

This—Schenkkan’s childhood image of Lyndon B. Johnson’s visit—is sun-soaked and dusty. Over the years, it has become so saturated with overlapping southern inflections that Schenkkan can no longer distinguish between his true memories of the afternoon and those that have been passed down to him by his family. When Schenkkan, now a Pulitzer-prize winning playwright, decided to write a play about LBJ, he asked his older brother for his more mature recollections. His brother answered that he had no memories of any car, but he remembered thinking that he had “never before seen [his] father behave so respectfully around another man.”

I spoke with Schenkkan over the phone around 11:00 PM, after he had returned to his apartment in Harvard Square from a ten-hour rehearsal day. All the Way, Schenkkan’s newest play, opened on September 19th at the American Repertory Theatre in Cambridge, Massachusetts. Over the receiver, his voice sounds low and gravelly, like the voice of an audience member at the dimming close of intermission.

For the past four weeks, Schenkkan has been attending each rehearsal, reworking, and fine-tuning the script for its new cast and location. “I’m a hands-on writer. The actors are constantly pulling me aside with questions about contradictions or inconsistencies, and it forces me to go deeper. It’s a very good thing and I welcome it, but it is not an easy thing.” It’s all about telling the story better, he says, and to accomplish this, he gives directorial notes. A former television, film, and theatre actor from the ’70s  to the late ’80s, Schenkkan has had intimate experience with working both on and offstage. Eventually, he moved to Seattle, Washington, where he began to build his reputation as one of the great contemporary American playwrights with his 1992 publication of The Kentucky Cycle. The seven-hour series of nine one-act plays, spanning two centuries of American mythology, was the first play to win a Pulitzer before being on Broadway.

For the past ten years, the mythological and historical American landscape has served as Schenkkan’s conceptual playground. He swept through the fires of the Vietnam War era for the Steven Spielberg-produced HBO drama The Pacific, traversed the Cumberland Plateau for The Kentucky Cycle, and made the cross-country voyage for Lewis and Clark Reach the Euphrates. It was a foregone conclusion for the Oregon Shakespeare Festival to commission Schenkkan to write a play for their American Revolutions Cycle. The Cycle program, Schenkkan tells me, provided the blissfully vague instruction of creating a show about “an event or individual moment of significance” in America’s history. Schenkkan accepted immediately and knew exactly where he was headed. The South had come calling, bringing him back home to Austin, Texas to find the man who pushed the car from the mud.

schenkkan began his research for All the Way in 2010, reading and re-reading each and every LBJ autobiography and biography, meeting with the president’s daughter, Lucy Bird Johnson, his White House Aide, Harry Middleton, and the former members of his White House Council. As he collected information at the Lyndon Baines Johnson Library—Johnson’s ranch and museum in Texas—he was revisited by his personal catalogue of memories of the president. He recalled that LBJ was the first political figure he recognized as a child. He remembered attending the campaign rallies and waiting anxiously on the election returns, then cheering at the landslide victory. He was also reminded of the abrupt change in his opinion of the President when the draft began in 1969. Watching his “two brothers entering Vietnam and Johnson rounding up the troops of young men,” Schenkkan’s enthusiasm plummeted, his feelings oscillating between loathing and fear.

Twenty years, one wife, and two young children later, his attitude shifted again. “As an artist trying to raise a family, I realized how dependent I was on certain social programs whose origins can be found in the Great Society.” After the long months of research and reflection, Schenkkan found that his understanding of Lyndon B. had grown only more complex. “If you could isolate his domestic achievements, his face would be on the side of Mount Rushmore,” Schenkkan explains. “Unfortunately, there was Vietnam, which did exactly what he’d feared it would do: destroyed all his domestic efforts, wrecked the Democratic Party. and left a wound on the country that remains today.”

For All the Way, Schenkkan whittled down this enormous collection of research to one single year, 1963-1964. “This [year] is the hinge point when everything changes in America.” Schenkkan raises his voice as he attempts to cram into our conversation what he has already worked so hard to cram into the 165 minute-long play. “In that single year, after [LBJ] becomes the ‘accidental president,’ he passes the 1964 Civil Rights Bill, thus announcing the death knell for the Jim Crow Era. It’s the beginning of the end of Democratic Party’s dominance of the South, the rise of the modern Republican Party and its Southern Strategy, the beginning of the fracturing of the Civil Rights Movement. It’s the Mississippi Summer, the Atlantic City Democratic Convention, the Gulf of Tonkin Incident.” Schenkkan reels off. “It’s all leading down one slippery slope, all in the same year.”

When All the Way premiered at the Oregon Shakespeare Festival in the summer of 2012, reviews described both the leading character and the play itself with the same adjective—“Shakespearean.”  Schenkkan sees the parallel: “He’s a tragic figure living in what we think of as the world of large Shakespearean heroes. He’s outsized in his Shakespearean ambition, he is someone who is simultaneously generous and cruel, very refined and terribly uncouth, a loving friend and absolute sadistic bully. The sheer size of the man has a Shakespearean quality while the story itself has a very familiar Shakespearean ring to it. There’s the wheel of fortune, the man who has nothing who rises to the top, becomes the most powerful man on the planet and wields that power gleefully. Then the wheel turns.”

The Oregon Shakespeare Festival invites this comparison. In American Revolutions: The United States History Cycle, the directors state their hope to mirror “the scope and scale of Shakespeare’s history plays” in their sponsored productions. The program stipulates that these projects should utilize and unite the intellectual forces of American “historians, artists and institutions” in order to create a piece of work that will “contribute to vision, conversation, to belief, to action...to participation in the life of our country.” The program operates as a space for makinh sense of the principle actors in American history.

Still, Schenkkan is quick to remind me that—despite his extensive work as a researcher of American history—he is not a historian. He tells me over the phone that the play is not a documentary, but rather a dramatic re-imagining of LBJ and his participation in the events of the year 1963. Schenkkan hopes to “do justice to the individuals,” but he recognizes that in order to consolidate these characters and their lives into a play, he must sacrifice certain detail and depth.

This was true of Shakespeare, too. His plays strayed far and freely from historical accuracy. Yet these are the accounts that seem to live on: it is his Richard III, his Henry VI, and his Julius Caesar of et tu Brute that inform our understanding of these histories, with far greater breadth than the textbooks. This is, in a sense, the role of the public historian—to do the research, to digest the facts, and then to give this history back to us. Schenkkan’s denial of historicism belies the importance of All the Way’s historical storytelling. Without playwrights like Schenkkan—working through the complexities of the Vietnam era, treading through LBJ’s mixed legacy—we would lose some of the richness of that history itself. It is through All the Way that we reopen this chapter, write new histories, and dig deeper into the collective memory of Lyndon B. Johnson.

BECCA MILLSTEIN B’16 is Shakespearean.