The Bearable Lightness of Being

The interworking of sunlight and interior space 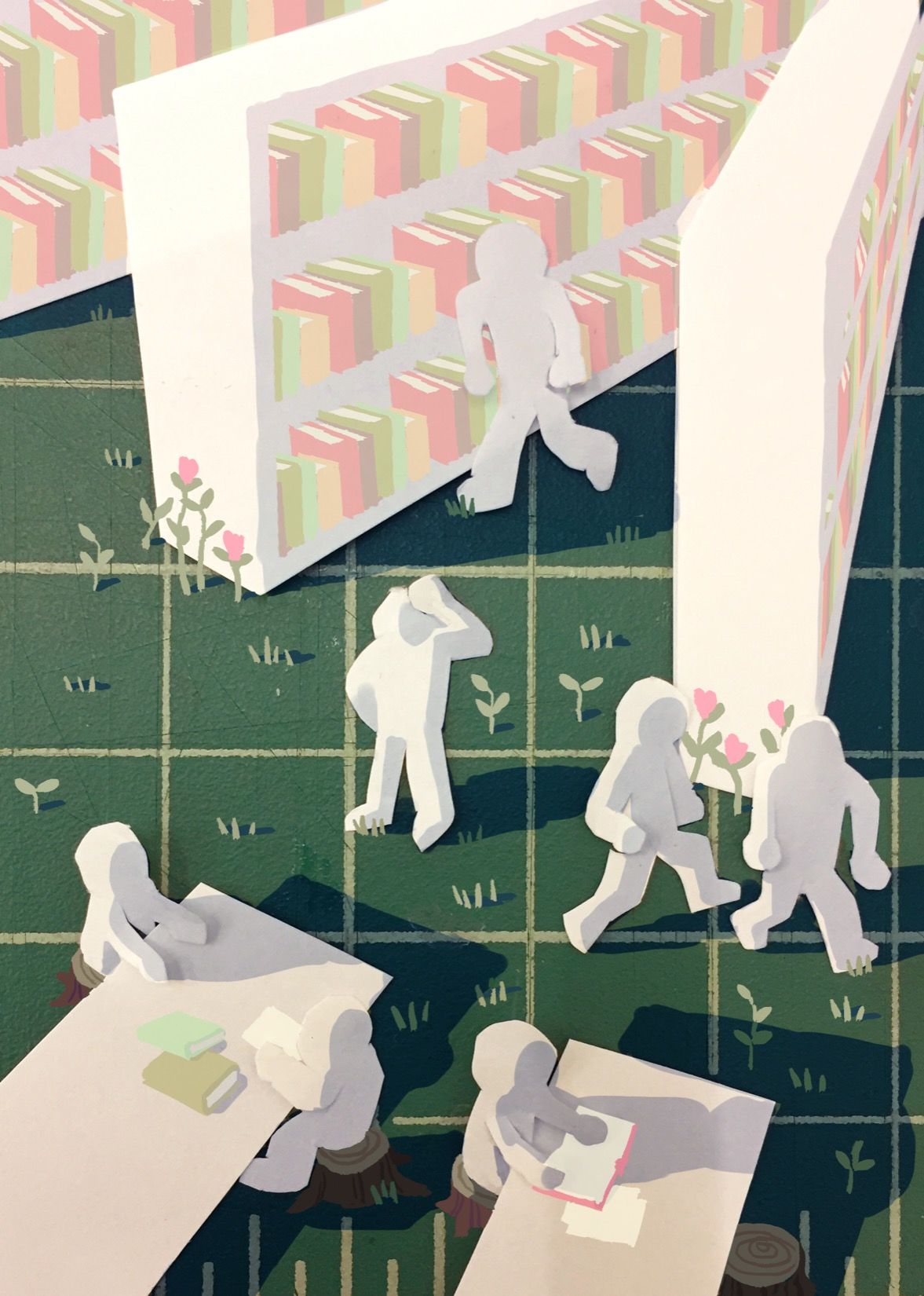 I constantly feel a tug away from my home in San Diego toward the translucent confines of my local Carmel Mountain Library. I began to question this pull, asking myself why I would gravitate toward the library, even when I had absolutely no work to do. I’ve since realized a consuming passion for exposure to natural light from within, a comfort in interior spaces intimately connected with their exteriors. For me, meteor-like rays of sunlight provide inspiration. The library, which was physically removed from the rancor and conflict of my day-to-day family infighting, became my haven. After unearthing the effects of floor to ceiling windows, wide stretching cantilevers, and surrounding greenery on my psyche, the Carmel Mountain Library became the starting point for my exploration into the effects of sunlight.

“Light” in common discourse takes two distinct forms: in the physical, photon particle sense, and in the sense of providing enlightenment or knowledge. By providing Vitamin D, and upping serotonin and tryptamine production, sunlight is critical to our physical and emotional well being. It allows us to understand ideas more clearly. The proliferation of floor-to-ceiling windows and massive glass facades into the global architectural canon, made possible by the invention of float glass in the 1950s, is a welcome one. Technological advancements have given way to seamlessly connected interior-exterior architectural designs; inside spaces are directly enriched by the outside greenery, animals, and most importantly, light. A sunlit environment can tremendously increase a building’s functionality under various contexts; in spaces like the residential House NA, the commercial Prada Aoyama, the political Arab World Institute and the religious Chartres Cathedral, the role of sunlight fills a niche. It can enrich a building’s ulterior purpose.

Tokyo’s House NA, designed by Sou Fujimoto in 2012, is a slender, 914-square-foot residence that rebukes all the conventions of a standard home: the building’s interior is completely visible to the outside world. A visitor’s experience of House NA is akin to living in a tree. Twenty-one terraced floor plates render the house a spider web, lacking walls but replete with branches that spasmodically connect, weave, and elevate. Fujimoto traces the benefits of the interconnected House NA to “its unique relativity. [In hearing] one's voice from across and above, hopping over to another branch, a discussion taking place across branches by members from separate branches.” Just as a tree absorbs light to live, House NA absorbs the sun’s rays to facilitate a densely interwoven interior, a vibrant, yet cluttered space. It creates a perfect union between the outside city, the architecture, and the human body; it extends the bridge between the natural and the artificial world. Ideas traditionally related to the concept of ‘home,’ such as privacy and reprieve, become beautifully twisted and confused within House NA. As a visitor, I’m simultaneously drawn to House NA’s immaculate beauty and slightly uncomfortable because of the radical propositions it offers.

In House NA, privacy is forgone (except for the rare curtain) as the house is open and spacious in both its interior and exterior. Sunlight becomes communal, dappled across the entire house, unfettered by walls. The ‘home’ here is no longer confined to the ‘house’; House NA instead overthrows the traditional, insular concept of home. It blows wide open the notion of private family by exteriorizing bloodlines into the streets. Overall, House NA materializes the contemporary zeitgeist marvelously.

Nine miles south of House NA, in Tokyo’s Aoyama district, a six story Prada building, designed by architects Herzog & de Meuron in 2003, serves as an all-purpose flagship store containing retail spaces, event rooms, and lounges. The glass facade, whose peak takes on a similar shape to the Louvre Pyramid, wraps seamlessly around the diagonally gridded cage reinforcing the glass walls; it opens a fluid interior-exterior tension that facilitates an ethereal space for the commerce inside. Horizontal tubes jut through each floor. Vertical columns pierce upwards like volcano plumes, engendering a labyrinthine cage exposed to the outside metropolis. As a result of this almost invisible cage, rays of light comprehensively dapple the interior of the building; the reflected light speckles vividly on exquisitely-dressed mannequins.

The Prada Spring 2017 Ready-to-Wear collection similarly exudes lightness and ethereality through its choice of textiles and colors. As mannequins stand in the Prada Aoyama adorned in bright plaid blazers, beautifully patterned kilts, and extravagant sandals garnished with ostrich fur, the emerging spring sunlight elevates the already regal grandeur of the dresses. Prada’s head designer, Miuccia Prada, described her rationale behind this collection: “Instead of exploring the history of women, which I have for a while, I decided to take care of now, the present, and trying to find elegance.” The uncluttered, airy Spring 2017 collection highlights Prada’s decision to present a fashion line unencumbered by a dire political climate, choosing to respond to darkness with lighthearted fluff. Fashion in this sense becomes a distraction, a turn against reality often needed to find comfort. Certainly, the injection of lightness in Prada’s line transports us to halcyon days, but if Prada is actually trying to speak for the present state of women, lighthearted elegance seems to skirt around the issue. Prada, who created a spring collection she described as “personal, real, intimate, and sensitive,” seems to be simply soothing her haute couture audience with looks reminiscent of Gatsby’s gloriously flamboyant parties, retaining an aura of indifference. And for someone who has a PhD in political science, joined the Italian Communist Party, and rallied for feminist social issues in decades prior, Prada’s subsequent jump into high fashion demonstrates a degree of hypocrisy. Prada and her audience, at least in the realm of fashion, appear unfazed by the emergence of political figures like Silvio Berlusconi and Donald Trump, possibly because they, as the rich, white elite, have nothing to fear while luxuriously insulated.

The Arab World Institute in Paris bridges the unlikely chasm between luminescence and politics. Designed by Jean Nouvel and built in 1987, the Institute incorporates traditional Middle Eastern designs with modern technological innovations. Specifically, Nouvel inserted ornamental mashrabiya designs (latticed geometric patterns) into his glass facade—designs common during the Islamic artistic period dominated by calligraphic designs. Light siphons through 30,000 geometric holes, creating a kaleidoscopic illumination of the interior. Two hundred and forty photosensitive, motor controlled shutters control the flow of light within the building, an architectural staple in Islamic architecture used for climate control. Other features of the building include a spiral library that spans seven floors, reminiscent of a ziggurat, an ancient Mesopotamian temple that reached to the heavens through its step pyramid design. This symbolic setting for thousands of texts within the Arab World Institute reveals the unification of reason and religion. As for the physical setting, the building sits on the banks of the river Seine, a historical breeding ground of knowledge and culture.

The architecture of the Arab World Institute is culturally welcoming and historically familiar. Through hosting countless conferences on Arab history, awarding prizes for the literature of Arabic peoples, and launching business meetings with a diverse coterie of Arab leaders, the Arab World Institute endeavors to provides a space for constructive, critical discussions. The French government has recently taken a reactionary stance against expressions of Muslim faith, most notably banning the niqab and burqa, implying that French Muslims must take a stance as either French citizens or Muslims. The Arab World Institute is a critically needed space that attempts to demystify the hurt within a society forcing the separation of religious and national identity, an implication that a citizen, if religious, must be privately religious and publicly secular. Nevertheless, the net positive contributions of the Arab World Institute are both vital and uplifting—the institute is currently hosting an art exhibition titled, “Treasure of Islam in Africa. From Timbuktu to Zanzibar.” The show emphasizes that cultural displays are both celebratory of distinguished histories and crucial in their capacity to induce familiarity with different cultures.

Encapsulating all these flaws, conflicts, and general bustle within the institute, the sunlight remains a constant fixture, enlightening all interior occurrences.

The significance of light is paramount in the medieval Catholic tradition. It’s no coincidence that the first phrase God spoke to the unformed cosmos in Genesis was “let there be light.” The Chartres Cathedral, located about 80 kilometers south of Paris, is an architectural colossus. It is unfathomable to comprehend how this 117,060 square foot giant adorned with 176 stained glass windows and spires reaching almost 400 feet was built. Unlike sleek, modern glass structures, the Chartres Cathedral embodies the interplay between sunlight and interior space for a specific ascetic purpose. Whether its visitor be a 13th century pilgrim or a 21st century churchgoer, the Chartres Cathedral timelessly actualizes the Gothic and Romanesque mission of raising churches to the heavens.

The main source of light in the Chartres Cathedral is through the myriad stained-glass windows, dwarfing the comparatively miniscule hanging lamps scattered throughout the interior. The stained glass itself is significant: light enters the building through a royal Mary seated with a (fully grown) infant Jesus, framed in the Notre-Dame de la Belle-Verrière window. Other scenes—like David and Goliath, and Moses and Pharaoh—are lit through the northern rose window. Sunlight illuminates the building through biblical spirituality and power; the Catholic devotee in its nave becomes bathed in religious empowerment—they might follow in Jesus’s footsteps as the “light of the world.” They might absorb and internalize the light that inundates them.

I’m sitting down at the Carmel Mountain Library, essentially writing an ode to my haven, an ode to the hackneyed, to the wire-framed brunette librarian, an ode to the Ikea-white, steel cut geometry of five rectangular tables, an ode to the angelic, devilish kids scurrying about at all hours, feasting on their escape from their mother's arms. Most importantly, it is an ode to the light itself, for making all of this bustle possible. A unified chaos ensues between the library’s interior and exterior, and to me, the lines between the two become less and less clear. I look around and begin to understand just how exactly the light is affecting the mother flipping through her Bible on the couch, the teenager outside taking photos for their Snapchat, and the college student writing in a cubby.

KION YOU B’20 is refracting.