Vertical Farming from top to bottom 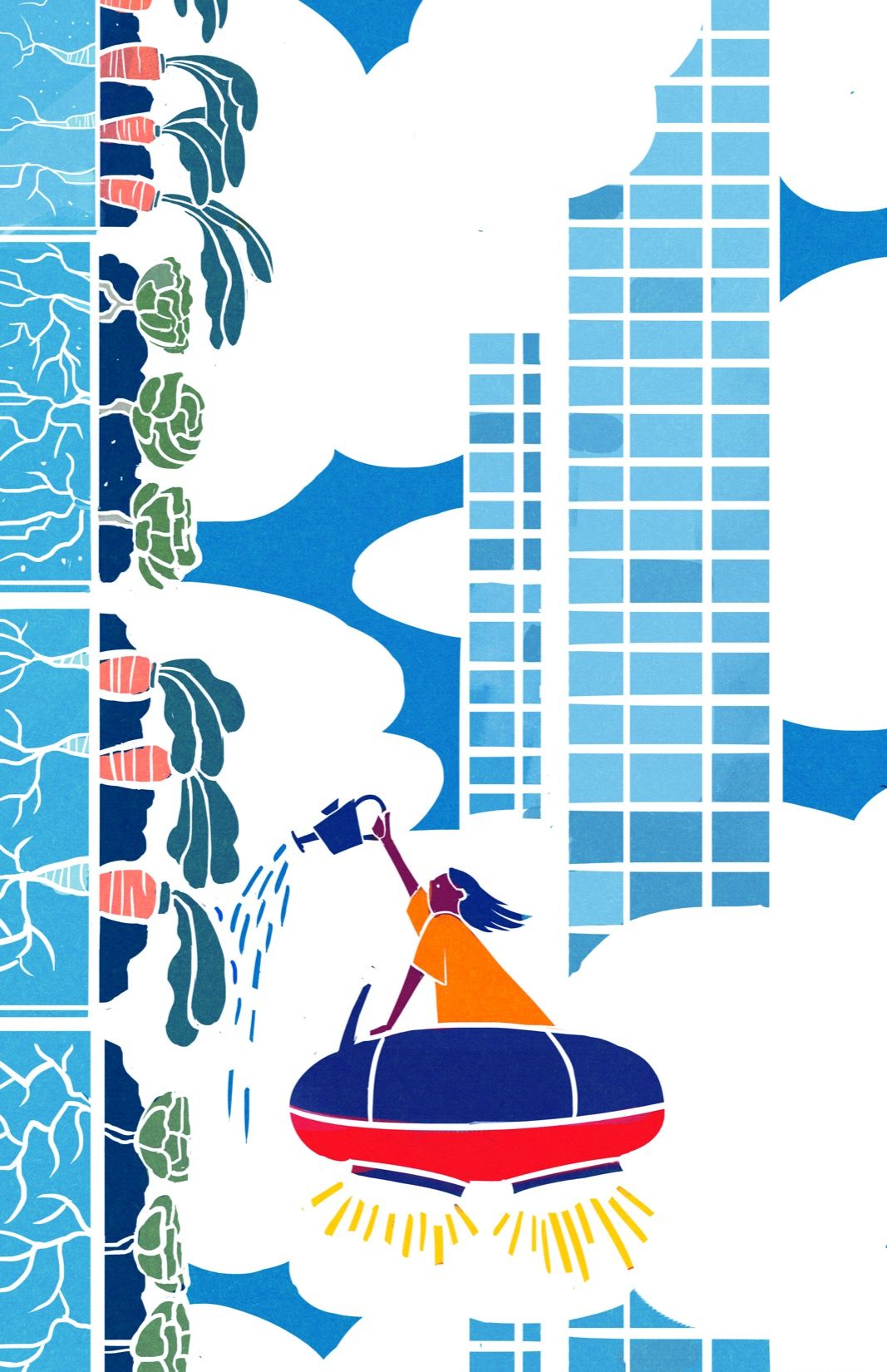 The farms of tomorrow will be food-factories built in skyscrapers. Plants will be grown, layer upon layer, with assembly-line efficiency. Sensors will gather data on the productivity, nutritional value, and resource efficiency of each and every plant. The only human will live behind banks of screens and servers; data will be parsed as better growing practices are determined. Cybernetic farmers will offer locally sourced, highly nutritional, and efficiently produced food to the cities of the world, effectively freeing urban eaters from the tyranny of traditional agriculture. After millennia spent digging in the dirt, man will finally be liberated from climatic uncertainty, price hikes, and nutritional poverty.

The story above is offered by today’s Vertical Farm (VF) propagandists. The website of AeroFarms, one of the most-talked-about VF startups, opens with the similarly mythologizing slogan: “Data Science Meets Horticulture.” Off the bat, this claim presupposes that agriculture was ever distinct from its data. Since long before the invention of the algorithm, farmers have observed and recorded the outcomes of their practices in order to develop newer and better ones. The mass of data analytics that supports our current industrial agricultural system—GPS enabled combine harvesters, global distribution networks, GMO development—are but an update of an age-old tradition. More importantly, in joining these two practices, AeroFarms makes a major claim about what they’re selling. Embedded in the slogan lies the suggestion that a tomato is juicier, more desirable, because an algorithm helped grow it; that the merging of data science and horticulture promises a better product. What truth is there in this claim?

The most successful VF systems today rely on aeroponics, or growing plants in air without a substrate for the roots to ground themselves. Seeds are embedded in reusable fabrics, often woven from recycled plastics, and grown under magenta LED lights. When the plants mature, the roots simply fall below the fabric. Grown in the open air, the roots need only regular mistings of nutrient-rich water. Trays of seeds arrayed as such are then stacked sky high. While the scale of indoor production remains miniscule compared to the tens of thousands of acres of farmland in Iowa and California, VF nonetheless offers an exponential increase in the amount of growing space available in cities. Once limited to vacant lots and roof-top greenhouses, this technology means that entire homes, office buildings, mills, and factories could eventually become farms.

This idea, however, has its skeptics. Writing for Salon, Stan Cox estimates that current VF systems require about 1,200 kilowatt-hours of electricity to produce each kilogram of edible plant tissue. Vertical farms often tack on solar-panels to meet their electrical needs in a green fashion—perhaps unaware of the irony that plants themselves are solar-panels. Photosynthesis, the basis of the solar-powered biological economy, means that growing plants under coal-powered, synthetic light, even if “energy efficient LED,” demonstrates the wasteful logic of profit-driven industrialization. It’s also not yet clear whether vertical farms are profitable, as the costs of building a vertical farm, compared to a traditional agricultural one, are astronomical. AeroFarms, for example, received $9 million in grants and tax credits from Newark and New Jersey, for a factory which likely cost more than $39 million. In contrast, the cost of an acre of US cropland averaged $4,130 in 2015.

Nonetheless, proponents of VF justify their project with the fact that ecological and climatic chaos threaten our current food system. Vertical farms use 95–99 percent less water, fertilizer, and pesticides than traditional agriculture. They have also demonstrated shocking improvements in both productivity and nutritional value. Michael Barren, AeroFarms’ head of research and development, was recently placed on Forbes’ list of 30 under 30 in Science for having “improved average crop yield performance by 44 percent to 91 percent depending on variety.” Data, they claim, is key to these improvements. AeroFarms monitors 30,000 data points for every harvest. Registering the light, heat, humidity, water, and nutrients present in the plants’ environment, a mad array of sensors relay their data sets to algorithms which note how minute changes affect the rate of growth and the nutritional value of the final product. Everything is controlled, from the amount and intensity of light to the cocktail of nutrients in the mistings. At AeroFarms, even the air is enriched with CO2, increasing it from the global average of 400 ppm to over 1000 ppm. In a scenario where changes in climate or a crop’s disease load are increasingly unpredictable and may disrupt crops in the field, vertical farms claim to offer the absolute control needed to render biological processes a mechanical function.

Our current agricultural system has long hoped of achieving factory-like efficiency. The logic of the industrial factory is one that enables the production of commodities such that products can be judged by a single metric of standard quality. The same is, theoretically, true whether the factory makes widgets or cucumbers. With this model in mind, Vertical Farming simply intends to bring agriculture into the 21st century. The issue, however, has always been that biology resists standardization, and that standardized biological systems tend to be weaker, less healthy, than complex ones. This is why our monocultural croplands demand more pesticides and fertilizer each year. Chemical inputs maintain frail ecosystems against the pressure of fertility collapse, nutritional poverty, pestilence, and disease. Vertical Farming improves on these errors by reducing chemical dependency, but nonetheless maintains the factory-minded view that plants must be reduced to their most standardized, predictable, and repeatable forms. The VF industry boasts that with enough data, it is possible to reduce the plant to a widget.

The true value of Big Data has its limits. Agriculture likely began as accident—hunter-gatherers noticing that the big seeds left in their trash piles grew into large plants—and has often developed along similar lines of contingency. The dream of absolute control, on the other hand, is one of containing and regulating contingency. Kate Crawford, writing for the New Inquiry on the failings of data mining, notes that “we reach a breakdown of meaning, a profusion and granularization of information to the point of being incomprehensible, of being in an ocean of potential interpretations and predictions.” The analyst must often constrain the possible readings of the data in order to render the manic flow intelligible. This will have serious consequences in the agricultural context. When does the swarm of data on tomato growth foreclose the possibility of a given tomato seed—and its radically unique DNA—exceeding expectations?

Plants resist widgetization. Most vertical farms have rigorous sanitation policies because their plants, grown in absolute isolation from other organisms, have little defense against disease. Developing in their computer-optimized environments, plants are radically unprepared for the many threats the world has to throw at them. In contrast, plants that grow in ‘natural’ systems develop very differently, and often healthier. The microbiome—the animal, fungal, bacterial, and archaeal life—around a plant’s roots offers protection against disease and pests; it also influences the uptake of nutrients and water. Agroforestry and permaculture are two alternative agricultural systems that take this lesson to heart, seeing the forest as the ideal model for food production. The proponents of these systems are motivated by industrial agriculture’s flawed efforts to regulate and constrain plant potentials, rather than embrace complexity and dynamism as generative forces. If plants grown alongside many other species are more healthy, why grow thousands of acres of only soy? The problem has always been that complexity is, well, complex, and that forest-like farms are hard to develop and harder to manage. How can one observe and improve a network built of diverse species of plants, bacteria, and fungi that interact in subtle and often imperceptible ways? Perhaps data science might be of assistance.

Returning to the original question: why do we want our food grown by data scientists? The potential of sensor-based data collection and analysis ought not be limited by the dream of absolute control. If the sensorial potential of VF was to be used in food forest settings like those imagined by agroforestry and permaculture, farmers might be better empowered to observe and comprehend, rather than control, their crops. Data in this capacity would not constrain the potential of plant-organisms to their bare mechanics. Sensors would instead render perceptible the interactions between organisms such that farmers could design ever more complex ecosystems. Vertical Farming offers a utopian model for the future of food, but in maintaining the idea of food as commodity, it fails to engage with the full potential of the plant as an organism. The data-driven food forest is the model for a healthier and more resilient future.

MALCOLM DRENTTEL B’18.5 could use a nutrient misting.