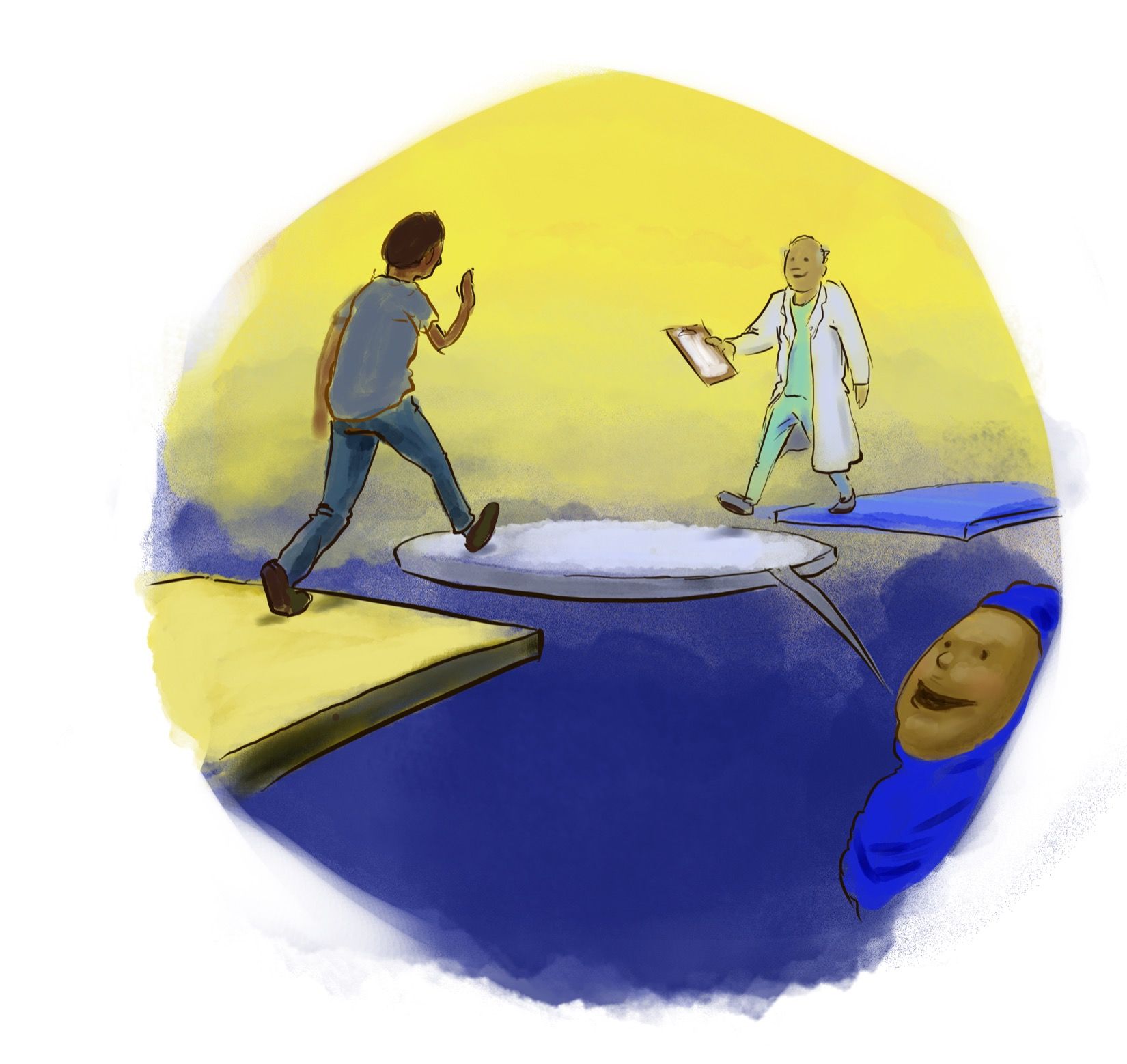 Omar Bah ran through the Gambian night. Echoes of soldiers shouting and dogs barking came from every direction. The memory of every kick and bruise that his battered body had sustained over the last months pulsed through him, pushing him onwards. He had dared to write about corruption in his government and now he was fleeing his country permanently.

After an arduous journey, Omar arrived in Rhode Island in 2007. He was tested for hepatitis B at Rhode Island hospital. Omar had been tested for the potentially life-threatening liver infection twice before, and both times, the results had been negative. He knew that he was at risk of exposure; 15-20 percent of Gambians are hepatitis B positive according to the U.S. National Center of Biotechnology Information. In the United States, that percentage is somewhere between two and six percent, according to the CDC.

Omar tested positive. It was two weeks until his next doctor’s appointment. He spent that entire time alone, much of it weeping in his apartment. He would close his eyes to sleep but wake up screaming. “[The doctor] immensely traumatized me because at that time I was also battling PTSD,” he told me. “I was isolated because I was the only refugee from Gambia. I didn’t know anybody.”

A positive hepatitis B test indicates one of two things: that Omar had already been inoculated against the virus, or that he was infected. The doctor was unable to tell him definitively which of the two were true since Omar had no medical records. Despite the foreignness of his surroundings, Omar could not accept the diagnosis. He asked to speak to the doctor’s supervisor. “Imagine this happening to people who don’t even read or write English,” he says. “People who are not empowered to speak for themselves.”

“In the current U.S. political climate,” Omar told me, “refugee equates to terrorism. Refugee equals illegal. Refugee means everything that is bad. This is wrong.” Trump’s policy is not only endangering thousands of the most vulnerable populations by not allowing them to immigrate to the US, but also affecting the health of those already within Rhode Island and beyond. Although, one program is trying to alleviate this health burden.

The room in Dorcas International Institute of Rhode Island is one of many occupied classrooms arranged in a maze of corridors. One day last May, Fadya, a family doctor, led a session on family planning with a nurse practitioner. In attendance were three recent refugees training to become Community Health Workers (CHWs). One man named Burqan, a refugee from Iraq, was being trained along with the others in a pilot program organized by The Rhode Island Department of Health, Dorcas, and the Refugee Clinic at Hasbro Children’s Hospital. These organizations are collaborating to train leaders within refugee communities to become CHWs who can advocate for and guide other refugees through the healthcare system. This program will be the first of its kind in Rhode Island.

The pilot focuses on the three main languages spoken by refugees in Rhode Island: Arabic, Somali and Swahili. This training was the third in a series. Burqan and his colleagues had already completed a 30-hour course in topics ranging from mental health, to interpreting skills, to ethics. The three have now graduated, along with ten others to date.

Burqan says he wants to become a CHW having navigated the healthcare system on his own. In an interview with the Independent, Burqan noted, “we noticed that the new refugees [were] facing issues mainly with medical appointments, such as how to deal with the medical provider.”  Burqan is hopeful that if CHWs like him can help in this aspect of refugees’ lives, “they can deal better than us before.” But now refugees are under even more stress, particularly since the divisive election cycle. Dr. Carol Lewis, director of the Refugee Clinic at Hasbro, told the Independent this is especially a problem for children. “I worry about the Syrian kids, many of who arrived with anxiety issues, and who are now telling us that they are scared," stated Dr. Lewis. "They hear that they are not welcome here. I can’t imagine what that does to a child’s sense of who they are in the world.”

She worries about bullying, as well: “Anecdotally, I can tell you that there has been an uptick in bullying incidents, and not just toward Arabic-speakers. I worry also about those who were waiting for family members to arrive. Now, who knows when they will come?”

Omar also emphasizes that being separated from family members is highly traumatizing for refugees, something that he knows about from personal experience. He described the case of one Somali refugee who arrived in Providence a few months ago. Omar helped him fill out the paperwork to petition to bring his wife and son to the US from South Africa. They were supposed to join him sometime this week. After the announcement of the ban, the man asked Omar, “Now they are stuck there, what is the point of me being here?”

Noting the potential repeal of the Affordable Care Act, Dr. Lewis says it is not yet clear what will happen to refugees' access to healthcare. Refugee children and their parents will still be insured through Rite Care, Rhode Island’s Medicaid program. Adult refugees who don’t have a job that provides access to health insurance stand to be the most impacted.

On the recent ban, Dr. Lewis says, “I am very, very sad. But also hopeful that this is a blip. But for that to happen, it takes people to speak out." The CHWs are doing that and more.

The CHW program could help address many of the issues that interpreters, another group of healthcare professionals—largely composed of former refugees—face through formalized training and reimbursement. Currently, interpreters are paid only for the time they spend in a doctor’s office. As we sat in the waiting room of Hasbro, Marie, an interpreter from Congo, described the work she had done for a patient sitting next to us. She was a refugee in Uganda for eight years, where she learned eight other languages. “It’s just a talent,” she says. “In my family we are six. But it’s only me who speaks all these languages.”

Marie was waiting with a patient at the Refugee Clinic in Hasbro to interpret their appointment. But her work day began before the doctor's appointment. She had picked the patient up from their home. After the visit, she would go to the pharmacy to interpret and pick up their medication. She would take the patient home. But the clinic only compensated Marie for the time she spent in the doctor’s office. The rest was all as a volunteer; work through which she found purpose but that also put stress on her financial situation. As she explained, “Whatever I do, I do by compassion, by love. No one is forcing me. And I know I’m doing it correctly because those are the languages I love. So I feel happy.”

CHWs will hopefully help interpreters, since they are responsible for much of the work for which interpreters are not compensated. To this end, the Department of Health is working with the Rhode Island Certification Board to create a CHW certification so that Medicaid can recognize and appropriately compensate the work being done by CHWs.

Already, Dr. Lewis says that the data coming back shows that the program is having an impact on refugee health. Over the past six months, the absences for routine healthcare visits, such as vaccines, dropped from an average of 24 percent to 9 percent.

But its future is uncertain. It is also unclear how the repeal of ACA will affect the possible reimbursement for CHWs, which was planned to be structured through Medicaid. According to Baha Sadr, the Director of Refugee Resettlement and Case Management at Dorcas, there are nine refugee cases for granting residency in Rhode Island that are now suspended because of the ban. “We are one community after all," Sadr says, "and though we may have difference in opinion, we have to be supportive of all of humanity. We, too, want this to be a safe community. Refugees promote safety because they love and cherish the freedom that this country offers them.”

After the initial assessment which revealed his hepatitis B diagnosis, Omar eventually requested a second opinion. He was tested again, but this doctor took the time to sit with him. She didn’t ask for medical records. She told him, “I will explain it to you as simply as possible. To start with, you don’t have Hepatitis B.” Omar was elated. The doctor explained that he had likely been vaccinated against Hepatitis B as a child, but had no record or memory of it.

Teddi Jallow, Omar's wife, joined him two years after he arrived in the United States. Together they founded the Refugee Dream Center in 2015, a post-resettlement agency. Omar described his work at the Refugee Dream Center as similar to the work of Dorcas, including referrals, skill development programs, and cultural orientations. Government support through resettlement agencies ends three to six months after a refugee’s arrival. Although clinics work to provide ongoing primary care, refugees face many barriers when it comes to healthcare access and literacy. Obtaining a driver’s license or using the postal system are difficult tasks. Teddi explained, “[The refugees] are left alone. I went through the same thing too. We just pull what we went through to help others.”

A typical day at the center might have Teddi organizing a clothing drive or preparing for an adult English and health promotion class in the afternoon. Omar has also became certified in trauma-based therapy by the Harvard Program in Refugee Trauma, a multidisciplinary program originally founded at the Harvard School of Public Health. His therapy, his organization, and his consultations with healthcare professionals are inspired by his own experience. He sees the community health workers program in a similar light. “I wish that when I going through all of this, I could also have had someone with experience with me,” he told me.

Teddi says that many refugees’ dreams are broken when they first arrive in America. Many cannot speak English, they struggle to find jobs, and must adapt to potentially dangerous living conditions. These difficulties will only get worse in the current political climate. Healthcare is a good place to start helping refugees. The CHW program, she hopes, will offer the support new refugees need to support themselves.

CHWs, Teddi, Omar, everyone at the Refugee Clinic are working to make sure that remains possible. “Maybe we will get there someday,” Teddi finishes, smiling.

SAANYA JAIN B’19 urges you to help Omar, Teddi and their partners in all the work they do by donating your time to the Refugee Dream Center by calling 401-300-0544.