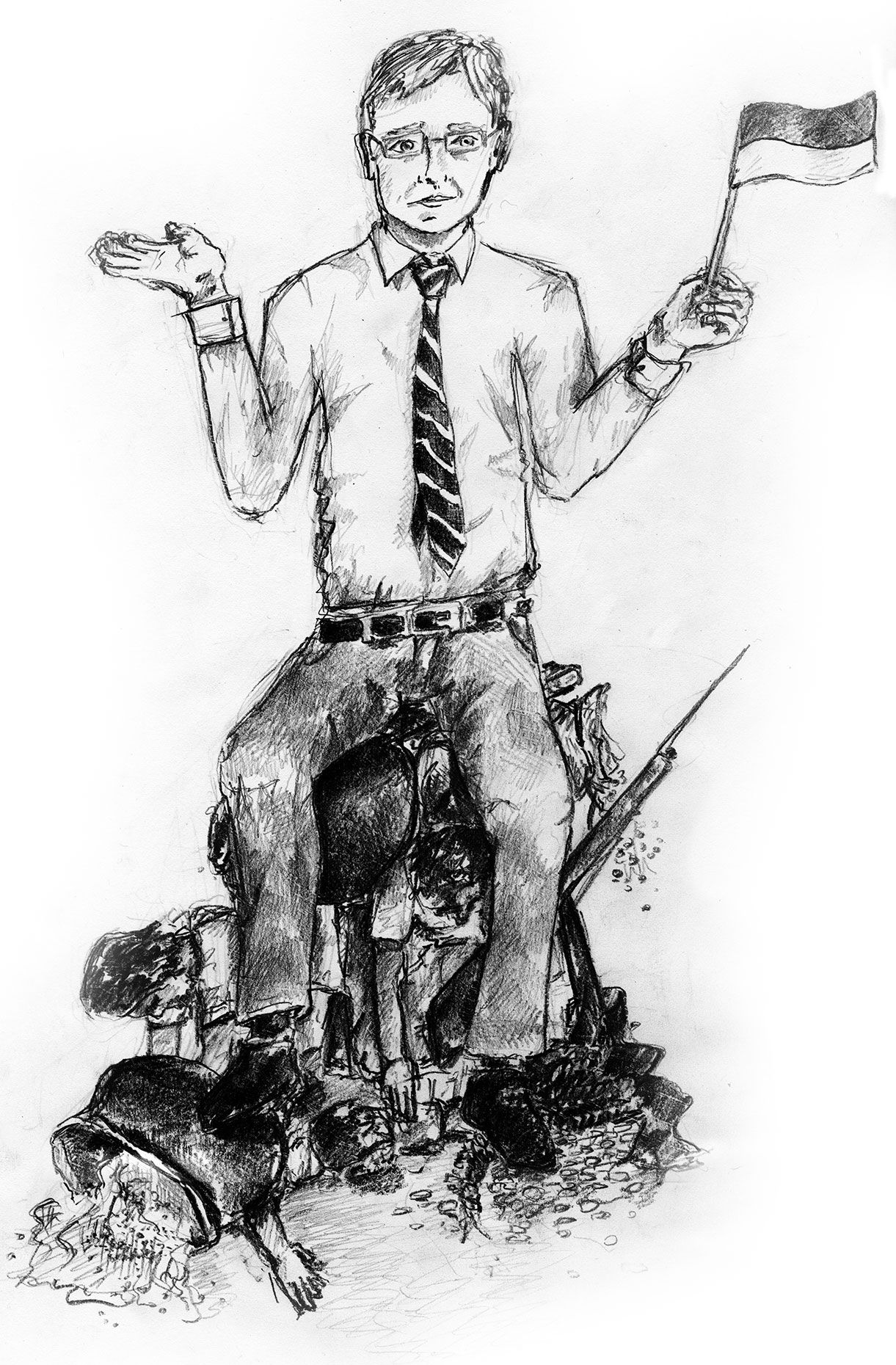 The video footage is grainy and tough to make out, and seems like it may have been shot on a cell phone. A tall, regal-looking white man in a suit processes through a crowd of seated Indonesians, shaking hands, kissing babies, and exchanging pleasantries with a certain Billy Graham flair. He stops for photo opportunities with the more iconic attendees: a feeble old woman with a cane, a white-bearded man in an army style beret. This scene, at the Dutch embassy in Jakarta, reaches its emotional apex when he climbs to the stage, a small accompaniment of diplomats surrounding him. Already towering over the crowd, he mounts the podium and begins his announcement.

Only an excerpt of the speech was recorded. After a light and nonspecific historical contextualization, including a passive voice reference to a massacre and the Dutch Royal Army, Dutch ambassador to Indonesia Tjeerd de Zwaad is matter-of fact: “On behalf of the Dutch government, I apologize for these excesses.”

A HISTORY OF VIOLENCE

the dutch east india company arrived in modern-day Indonesia in 1619, and immediately set up shop in Jakarta, now the nation’s capital. Far from a handful of pilgrims, the Dutch East India Company (or the “VOC,” in Dutch shorthand) brought with it all the trappings of a cartoonishly evil corporation. They trafficked in spices, precious metals, and slaves, slaughtered certain indigenous populations while forcing others into servitude, all while churning a tidy 18% annual profit in the East Indian “export market”—a fabulous euphemism. Pick your most nefarious corporation (Foxconn, United Fruit, etc); they have almost certainly taken pages out of the Dutch East India Company playbook.

The VOC’s profitability continued to skyrocket throughout the 17th and 18th century.  While Indonesia brought the Dutch riches, the Dutch brought Indonesians epidemic disease, forced religious and social norms, slavery, sexual violence, and the like. In the latter part of the 19th and into the 20th century, however, the well began to run dry. Economic realignment due to industrialization—along with the high price of persistent Dutch war mongering—forced the colonialists to loosen their stranglehold on Indonesian holdings.

This came to a head during World War II, when Japan formally conquered Indonesia. Not surprisingly, this development didn’t sit very well with the Dutch, who had grown rather fond of the colony that had facilitated their meteoric financial rise. Once the Japanese fell in 1945, the Dutch marched right back in, eager to reassert themselves over their favorite colony.

The excitement wasn’t mutual. In the 60 days between the Japanese exit and the Dutch return, the Indonesian population declared independence. The movement had support from a vast portion of the native Indonesian population by the time of the Dutch return. Indonesian Nationalist groups, spearheaded by leaders like Sukarno and Mohammad Hatta, already had a constitution and a republic in place, and no interest in returning to Dutch colonial rule.

The Dutch sent down Captain Raymond Westerling, a man after whom the term “ruthless son of a bitch” may as well have been coined. From 1946 through 1947, Westerling and his men indiscriminately slaughtered the nationalist rebel groups, constituted mostly by young men and boys. These public, execution-style massacres were often carried out with village populations looking on in horror as their family members were offed one by one.

Westerling and his men traveled from village to village throughout the archipelago, performing summary executions with the stated intention of repressing the nationalist movement. Perhaps the worst atrocity, (if you can consider summary executions on a gradient of badness), came on the island of South Sulawesi, an Islamic nationalist center, where 208 male residents were executed on the doorstep of the government building in early 1947.

The Dutch finally retreated in 1949, and, under international pressure, recognized Indonesia as an independent nation, signaling the end of their colonial reign. The death toll from this four-year campaign stands at roughly 40,000 Indonesians, a number which the Dutch would later round off to “a few thousand.” Westerling, for his efforts, went down in Dutch lore as a national hero, and neither he nor his men were ever tried for war crimes.

though it may seem surprising, political apologies have historically been an effective and sincere way to express remorse for past atrocities. The German apology to the Jews after the Holocaust, the American apology to Japanese Americans after internment, and the Australian apology to its Aboriginal population after various extermination campaigns—all of these moments are seen as momentous and impactful occurrences in diplomatic history, laying the framework for future healing.

What’s more, political apologies can be powerful tools for the recognition of wrongdoing, ensuring that past events will not be forgotten or distorted in any fashion.  In the three aforementioned cases, the political recognition of transgression alone was considered a huge breakthrough in diplomatic relations. Though seemingly insufficient, these apologies have historically been the springboard for progress.

The case of Japanese internment provides an interesting and applicable study. Though the forced interment of Japanese Americans happened in the 1940s, it took until 1988 for the American government to formally recognize the events that occurred. The official redress, which included a payment of $20,000 to each survivor and a Congressional apology to the Japanese American population, is still viewed as a watershed moment in the civil rights movement. What may seem like a dry and insufficient bureaucratic action was actually a landmark moment for Japanese activists like Marielle Tsukamoto, who recently told NPR that this apology has allowed Japanese Americans the ability to heal and move on from this painful past.

but can a simple “i’m sorry” really make up for the killing of 40,000, not the mention centuries of exploitation and gratuitous destruction? There are plenty of reasons to be suspect of the concept of diplomatic apology, not to mention this apology in particular.

The wording of the Dutch apology, specifically the reference to massacres as “excesses,” is outrageously euphemistic, and doesn’t seem to carry with it the remorse one would expect in such a circumstance. There is a startling lack of empathy in the clinically presented statement of transgression, and the Dutch awareness of “excesses” comes off as both sterile and removed. From a semantic standpoint alone, this apology doesn’t even seem convincing enough to get a kindergartener off for talking during naptime.

From another angle, the apology seems rife with ulterior motives. Media coverage of the event, though extremely limited (American news outlets have conspicuously shied away from covering it), has pointed to the timing of the apology as a cause for skepticism. The Dutch have had over 60 years to prepare this apology, and, with a planned visit to the archipelago by the Dutch Prime Minister in the coming months, many thought that his presence might signal the appropriate opportunity for an official redress. Yet the statement was made rather unceremoniously and unpredictably, blurted out from the safety of the Dutch embassy in Indonesia on the lips of a far less consequential political figure. Cynics have indicated that the Dutch just wanted to get this unavoidable and unpleasant disclosure out of the way and forgotten well before their ceremonious return to the country.

Furthermore, the apology came in Jakarta, far from the majority of the violence in question. The widows of victims, though extended a friendly invitation from the Dutch embassy, are far too old to travel the long distances required to get to Jakarta in the first place. Even the concept of an apology—a subtle way to coerce a former colony into granting forgiveness—seems troubling, at best.

and yet, for the most part, reception has been overwhelmingly positive.

Diplomatic apologies for colonial violence are extremely rare. Aside from monetary settlement paid by the United Kingdom for their torturing of the Mau Mau rebels in Kenya in the 1950s earlier this year, the Dutch are only one of the few countries to publicly take responsibility for atrocities committed in the Colonial era (the British recognition was a court settlement, rather than a public apology).

In fact, violent atrocity in the colonial era has been a collective blind spot for most countries in the Western world, with Britain, Spain, Portugal, and the United States largely refusing to take a public stance of repentance for the millions of lives lost in the conquering and subjugation of the colonial world. Though it may seem insufficient, the Netherlands has actually taken a progressive initiative in issuing an apology at all.

Elazar Barkan, a professor of International and Public Affairs at Columbia University, has written extensively on the institution of diplomatic apology. Though he concedes that the language is “strained,” he thinks the apology ensures that the case will not disappear. This action is just the first of many, he believes, as the Dutch begin a total reconsideration of their colonial legacy. He is confident that this action will be increasingly important in the coming year, despite the fact that the only YouTube clip of this event has a paltry 43 views (of which this author am responsible for at least seven).

Perhaps what’s most important is the reception from the Indonesian population, and from the family members of the victims. Though the reporting has been limited, those interviewed seemed receptive and relieved by the Dutch apology. One woman, whose husband was slaughtered in the South Sulawesi massacre, says she has forgiven the Dutch entirely. Another widow, one of the ten to receive a $27,000 settlement as a result of this action, stated that this gesture was exactly what she needed to get over this traumatic history. Many others did not believe such an apology would ever come.

ALEX SAMMON B’15 is also a euphemism.