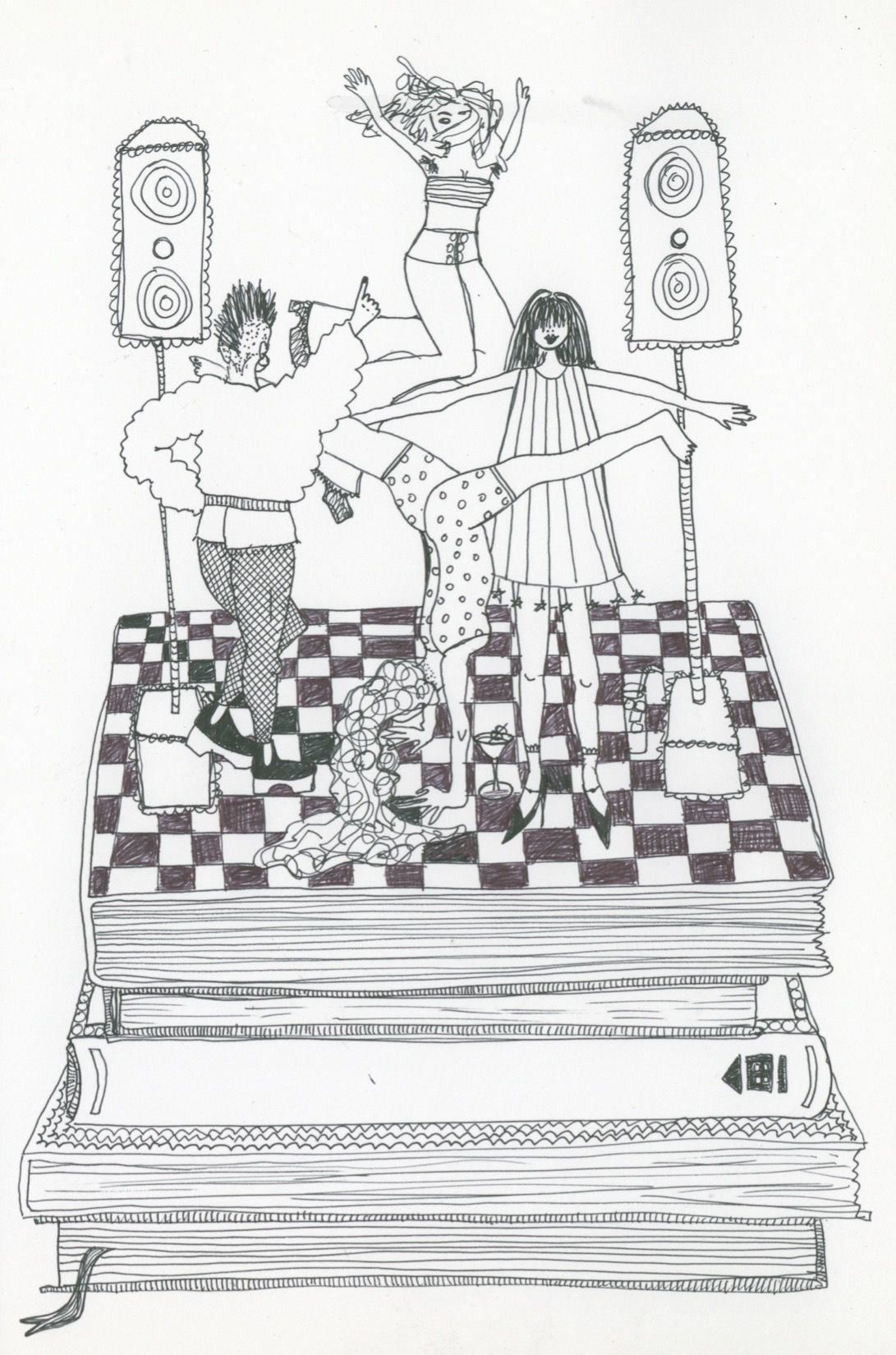 Suppose a writing desk walks into a gay club.  Or perhaps the desk is the dance floor of the club. The books on my writing desk commingle, rub their limbs against each other. Loose sheets of poetry dance with queer theory until a zine cuts in. Colorful post-it notes flirt on the surfaces of open pages. James (Schuyler) tongues Samuel (Delaney), Leslie (Feinberg) looks on. We converse with one another on the side of the dance floor as if we were not removed by time and space.

My thought experiment reminds me of Anne Carson’s stated writing practice. In an interview, Carson talks about using three different desks at a time and the inevitable slippage that results: “I work at three different desks, with a different project open on each, let’s say, so one is academic, one writerly, and one art. I go at these erratically, sometimes to all three desks within an hour. They cross-pollinate one another.” A classics paper swerves and finds itself on the poetry desk; a short story accidentally lands on top of the academic pile. They say hello and suddenly the projects germinate in new, hybrid directions. Such is the joy of entropy: the fruitful commingling of theory, art, and life. The flow is dynamic and multidirectional.

It’s just after midnight, and we are outside the club. I don’t know about you, but I’m dressed to kill—a black mesh top, magenta lipstick, and a shedding black leather jacket to finish the look. Femme touches to fuck up my masculine presentation. The line’s a little long, winds around the block. But we’re patient—look at all the queer fabulousness around us. Fishnets, mascara, combat boots, tank tops. And besides, all the more time for us to talk, to let our excitement build.

To enter the club, first we’ll have to pass the bouncer. Perhaps the most intimidating bouncer in the world is Sven Marquardt, the renowned photographer who guards the doors of Berghain, an infamously hard-to-get-into techno club in Berlin. Every weekend, hundreds of wannabe-revelers get turned away after hours of waiting in line. The inscrutable door policy has inspired fervid internet speculation on how to get in.

The secret? In an interview with GQ, Marquart revealed how he curates the crowd: “It’s subjective…You always want friction, though. That’s the theme in any good club.”  Friction also interests me. The jarring juxtaposition of unlike things rubbing against each other. Perhaps this is why I am so jazzed about the queer poetics of nightlife, tasked with reconciling the seemingly mismatched worlds of poetry and the gay club. One appears reflective and pensive, the other disreputable for its hedonism and social transgression.

Is this an impossible dance, to make poetry and raving speak the same tongue? To make this dance work, the writer must perform a brave act of translation—in its Latin etymology, literally “to carry across.” Through language, the writer must carry the body, hold the thought in suspension midair, glide across the floor of language with pleasure. Carpe noctem—to capture nightlife on the page. By translating, the writer of nightlife passes the “bouncer” of translation and enters a queer world. And so we arrive, animating the club anew: queer nightlife splayed on the desk.

What can the queer dance floor teach us about writing? In the recent essay “What Beyoncé Taught Me,” Zadie Smith offers some “dance lessons for writers” via a series of case studies of the world’s most famous dancers, including Fred Astaire, Michael Jackson, Madonna, and Beyoncé, for literary pointers in “position, attitude, rhythm and style.” Through these master classes, Smith reverses the direction of the metaphor for dance as “poetry in motion” to set language in motion. What follows is a series of snapshots of some of my favorite queer poets of nightlife—Frank O’Hara, Eileen Myles, and Langston Hughes—to observe how the writer dances.

I am struck by a confession Eileen Myles proffers in her autobiographical novel Chelsea Girls over a drink in a gay bar: “I was writing these poems up in the air, really stupid ones all over those cocktail napkins they give you. God, they were awful. About vitamins and stuff. I was off cigarettes which always made me particularly insane…” Even as we sit at the bar, Myles can’t stop writing her poems. Myles improvises with writing “up in the air,” like a dancer. Her napkin poems are not intended to be permanently preserved and we readers will certainly never see them; instead, they are a means of improvised engagement with the stimulating surroundings of the club.

Myles invokes writing as a verb, not writing as a noun. Spontaneous and giving no fucks about how it will appear tomorrow morning. How fabulous and liberating! Just as nightlife is an ephemeral experience and its pleasures are retained only in the memory of the participants, Myles cruises with language and relishes in its temporary immediacy, even while acknowledging that the actual content might be “really stupid” and probably not worth preserving. Instead of showing us these supposedly “awful” poems, Myles preserves for us the pleasure of the process—the motion of the poetry-making, the hand dancing across napkins. Spare the hangover for another day.

Something about the writing changes. As queer writers from James Baldwin to the Pomo Afro Homos have demonstrated for decades, the process of writing nightlife is not merely imitative; the attempt to transcribe (translate?) queer nightlife demands new experiments on the page. We shift towards the ephemeral, embrace the immediacy of stimulation, polyrhythmic sensation. We think about space and intimacy. What bodies does this desk hold and how do they touch? We move closer.

Take Frank O’Hara’s 1955 poem “At the Old Place,” for instance. At first, it seems like a descriptive poem about nightlife, narrated in the continuous present to place us there. But amidst describing his escapades in the Village, nightlife writes in O’Hara’s hand. An evening is improvised fresh on the page and O’Hara foregrounds the pleasures of nightlife’s language:

Down the dark stairs drifts the steaming cha-

cha-cha. Through the urine and smoke we charge

to the floor. Wrapped in Ashes’ arms I glide.

heaven!) Joe’s two-steps, too, are incredible,

and then a fast rhumba with Alvin, like skipping

O’Hara improvises with sound play, rhythm, repetition, alliteration, and line breaks to translate the transient joys of the gay club. Read on the page half a century later, the language still pulses with restless energy.

So many voices. Shouting over one another simultaneously, excited by the freeing possibilities of the night. Langston Hughes lets us overhear some of this dizzying frenzy in his 1923 poem “The Cat and the Saxophone (2 A.M.)”:

The intense multi-line enjambment and varied capitalizations simulate overlapping voices in the crowd. Hughes interpolates song lyrics from a popular ragtime song played by live musicians (reproduced in all caps) into bar chatter, interrupting what seems to be an ongoing conversation. Boy, it’s hard to hear you over the music! Instead of emphasizing narrative, Hughes highlights the stimulating atmosphere and the surplus of feeling it produces. Just as the characters in the poem’s narrative feel compelled to get up and dance the Charleston, Hughes’ language too wants to leap off the page and move. The poem does not reduce nightlife; instead, nightlife expands the poem. Hughes’ language pushes out of itself to carry music, bodies, and space, refusing the limits of the page. (That extra exclamation point!!)

Hughes’ sexual orientation is controversial in scholarly circles, though it’s widely suspected that he was gay, as Isaac Julien’s landmark film Looking for Langston portrays. In The Scene of Harlem Cabaret, Shane Vogel suggests that regardless of Hughes’ actual sexuality (which may, ultimately, be unknowable), his literary project was fundamentally queer insofar that it refuses foreclosed identification and questions “the constitution of the sexual subject in the first place.” By depicting scenes of illegal after-hours nightlife as a site of intimacy and pleasure, Hughes renounces regulation and embraces an alternative, queer life-world.

In Impossible Dance, an ethnography of social improvised dancing in New York’s LGBT clubs, Fiona Buckland reimagines the form of her theoretical approach to match her unique subject: “In a way, this project is a dance floor. People enter and, drawing on their experiences, memories, hopes, and desires, move across these pages in unique ways. Their moves interact with the moves of others. There are similarities and differences, juxtapositions, counterpoints, polyrhythms. There is self-fashioning, queer world-making.” Buckland’s metaphor reminds me that reading and writing are fundamentally physical encounters. When I read literature on queer nightlife, my goal is not to analyze the works as passive objects but instead to improvise with them and highlight their breaks from normativity. We are not contemporaries, but somehow we find ourselves here on the same writing desk.

Sara Ahmed’s Queer Phenomenology puts the “orientation” back into “sexual orientation” to apply a critical optic to how bodies are spatially oriented. Rather than encountering the world through the “straight” framework heteronormativity encourages, the queer eye might look askew through a new angle. Likewise, I contend that queer nightlife re-orients our phenomenological relationship to the activity of writing—disrupts, dizzies, seduces, intoxicates the poet’s thoughts and language. In short: the poetics of nightlife queers our perspective of the writing desk, invites us to come at it from another angle.

Yet another angle: I experiment with writing my own nightlife poems, riffing with the bodies on my desk. Watching the others dance, I pick up some of their moves and see what feels good. I copy a punctuation mark, try to imitate a rhythm I hear, echo a mood or a sense of flow. I think about how my own experiences of gay clubs can shape my relationship with language. Can I approximate the pleasure I’ve worn, the sense of total aliveness on the page? Dancing in the dark, I set language free. 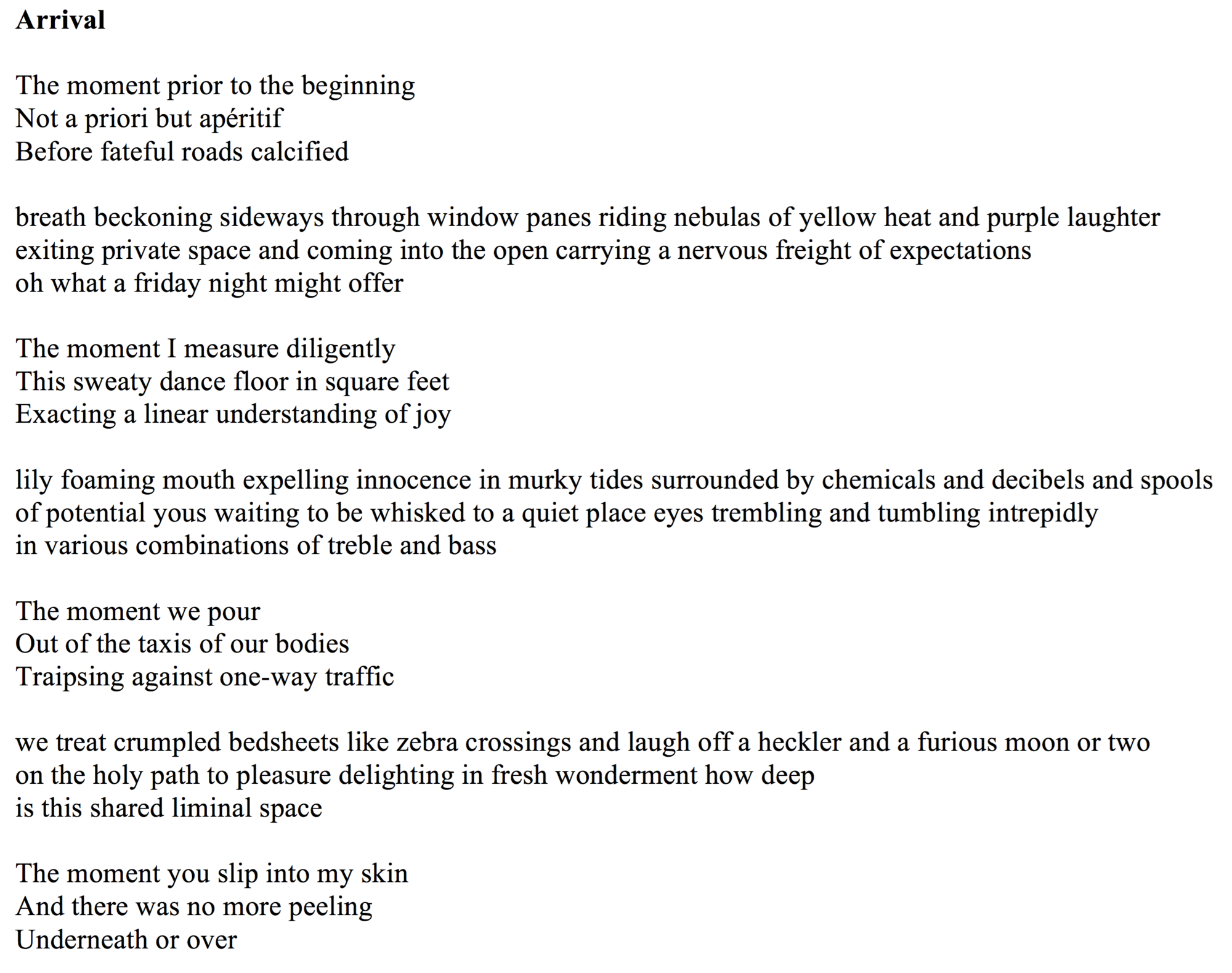 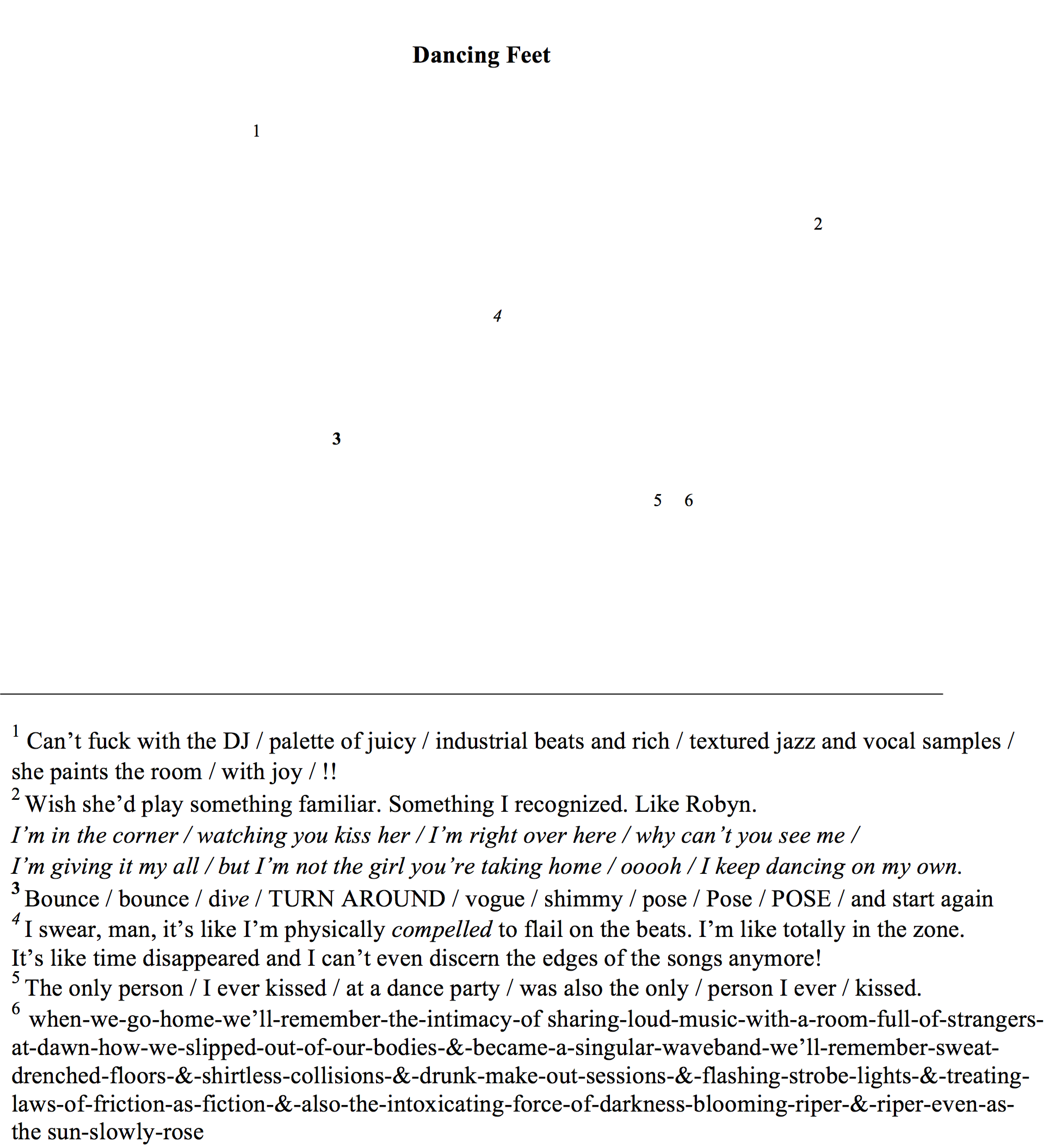 NOAH FIELDS B’17 is waiting for Robyn.