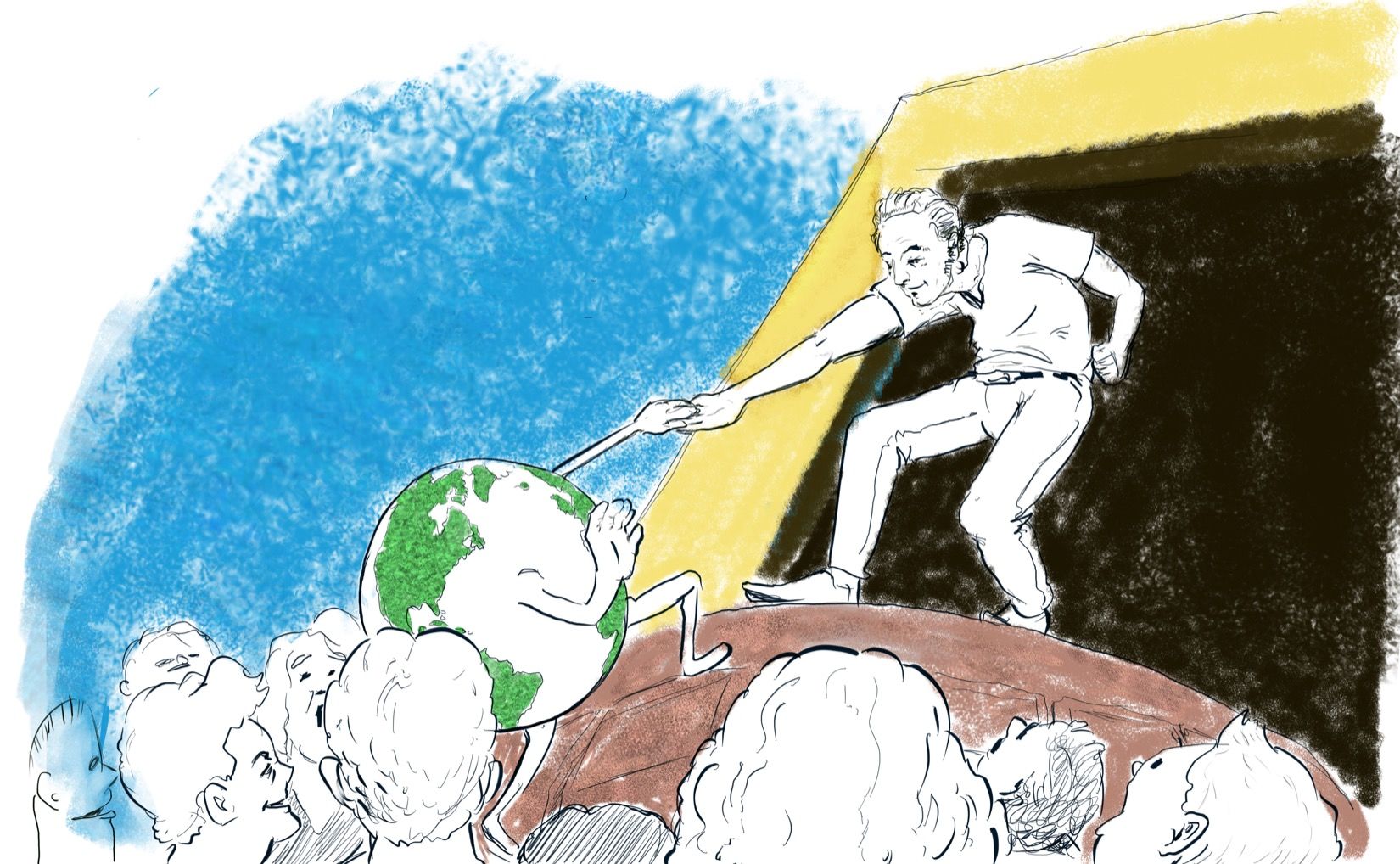 When I was 14 years old, my father sat down on the piano bench with me and placed some sheet music on the stand. He couldn’t read it, but he had made sure his kids would be able to. As I began to test out the first chords of “Dancing in the Dark,” I didn’t know I was playing the music of one of the world’s best-selling artists of all time, an artist who had won 20 Grammy awards, two Golden Globes, an Academy Award, and would later be awarded the Presidential Medal of Freedom.

I didn’t know that his music would connect a father in the throes of a mid-life crisis and his teenage daughter. Looking in the mirror, he was searching for a spark and she wanted to change her clothes, her hair, her face. All of this, halfway across the world in North Africa, in an Indian family, 28 years after the song had been released, by way of airplanes, treasured cassettes and timeless notes.

Bruce Springsteen was once asked how he delivered such vein-bulging, heart-thumping, ground-shaking, hell-making live performances. He said that he knew his “voice was never going to win any prizes,” so he focused on his songwriting and, now legendary, live performances. I knew I had to go to the last stop of his “The River 2016 Tour” in Foxborough, MA—the closest he was going to get to Providence for some time.

When I arrived with a group of friends at Gillette Stadium, I was certain that we alone would decrease the average age of the audience by a few decades. Though there was a sizeable population of fans sporting t-shirts they had bought at concerts before I was even born, there were people my age all around us, singing each song word for word.

Three of our fathers had introduced Springsteen’s music to us. It came as a surprise to me, since we all had a natural aversion to anything our parents thought was cool. “I hated him at first because my dad liked him,” was how my friend Sarah put it. The three of us came here as a kind of hereditary rite of passage, or a testament to our fathers, some here, some gone. One friend’s parents had met at a Bruce Springsteen concert. Another’s father spent his last night in the US at a Springsteen concert before flying back to India. My father had missed the opportunity to see the Boss on his New Delhi tour when he was in college, and I was there to see Springsteen in his stead.

That night, Springsteen ignored Foxborough’s 11:30 curfew (which had already been extended from 11:15, just for him), costing the stadium a $22,000 fine. That night, he caused a traffic jam for two hours in the late hours of night in the suburbs of Massachusetts. That night was the second-longest concert he had ever played, at four hours and one minute. That night, at least three women completed a cycle begun by their fathers.

How do 120,000 Swedes in Gothenburg in 2016 or 70,000 Indians in New Delhi in 1988 sing their hearts out to Born to Run—a song with New Jersey-specific references to Highway 9 and the Palace, a demolished Asbury Park amusement hall? How do the mostly white collar fans of Springsteen’s blue collar world, who have never known “workin’ in the fields/ ‘til you get your back burned,” sing every word with conviction?

How does Springsteen’s appeal transcend generational and national boundaries, while being grounded in the minutiae of the American ’50s working class world?

The answers lie somewhere in his songs—in burned out Chevrolets and Kingstown bars—but also in his live performances. The setlists of his concerts are a work of art in themselves: loosely planned, so the night can take him where it may if he is inspired by the song requests on hand-written cardboard signs in the pit. His songs are interspersed with anecdotes almost sung, with their own rhythm, perhaps a song in the making. At Foxboro, he recounted:

“I handed in my record to the record company, and they said…Well, they gave it back to me.”

He strummed his guitar, the audience cheered, a kind of call and response.

“They said, ‘there are no hits on this!’ So I went home and got out my rhyming dictionary.”

And he jumped straight into “Blinded by the Light.”

And so went the night. He touched fleetingly on the “ugly” election season, on his first guitar, on his father, on playing for the the legendary producer John Hammond who let “two absolutely fucking nobodies” into his office.

Perhaps his appeal is that, in 50 short years, through “practice, practice, practice,” someone became the Bruce Springsteen. That from Asbury Park, NJ, the son of immigrants from Italy and Ireland, he made his life an example of the American dream. In Springsteen’s world, it is a dream anyone can aspire to.

Perhaps the tighter the focus of the lyrics—the Metuchen Ford plant assembly line in “Glory Days,” for example—the more universal the song. Maybe because the details become symbols that carry within them the American dream, which mean different things to those outside of the US, and those within the US but outside the white working class universe that Springsteen constructs. Even though he no longer belongs to that class, he retains his image as its spokesman. Conservatives and liberals hold up his songs as the embodiment of America. They meant different things to my teenage self and to my father, but in that very fact, they are a repudiation of the things that separate us.

I had never been to New Jersey, and I had only seen the likes of the car mechanics that Bruce Springsteen played in his music videos in Hollywood movies. In that sense, Springsteen’s vision, even though it stemmed from a lived experience, became a performed mythology that anyone can connect to.

When my friend Sarah was little, her father told her, “Bruce Springsteen changed my life.” He played Springsteen on every road trip, intertwining his own stories with the stories of the songs. He would tell them about devoted fans who got to meet Springsteen and about each person in the E Street Band. He would describe the magical moment when tens of thousands of people would hold their breath as Springsteen played the opening notes in a concert. He would play “Thunder Road,” his favorite song, over and over again. When Sarah and her siblings were little, they found it annoying. She came around to the music later, and Springsteen concerts became her and her dad’s shared passion.

In fact, her first concert ever was a Springsteen concert. As her father sat on the grass across from the stage, a giant bucket of popcorn in his hand and his family by his side, he proclaimed “Everything is perfect right now.” Just then, her little brother began to look queasy. Her father dumped the popcorn out so that he could hold the bucket under his son as he vomited. It was still a pretty perfect night.

In 1988, my father was in college in India, and Bruce Springsteen was the rage there. The song “Born in the USA” was the anthem of the many men who dreamed of living the American dream, little aware that the song was a critique of the Vietnam War and its aftermath on veterans (a mistake that Ronald Reagan was also guilty of, using the song for his reelection campaign). The songs were on cassettes, the kind that have black wire that you would occasionally have to re-form by wiggling a pen around. The New Jersey accent was hard to understand, so he and his friends sang the bits they knew.

When Springsteen came to New Delhi that year, his campus was full of young men who took overnight buses to his concert and back. My father was not one of them—rock n’ roll wasn’t the kind of folly for which you risked your education in his family. But he would hear them say, hum Boss ko milne jayenge: we’re going to meet the Boss.

At different stages of our father’s lives, in different countries, Sarah and I connected with our dads through Springsteen’s music. More than just an American Dream, or a white working class dream, it is a dream that people around the world can imagine participating in whenever his heart-thumping music comes on.

As we waited to head home, I turned to a friend and said: “I can’t wait to tell my kids that I went to a Bruce Springsteen concert.”