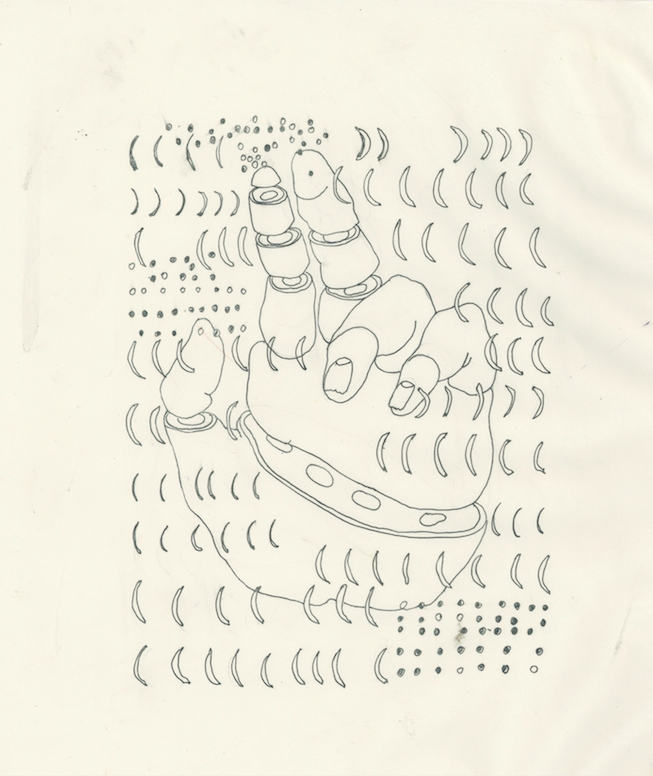 My fingernails grow about as fast as the continents drift. Sometimes I look down at the white slivers as they form, fight the urge to bite them, and think of how the Indo-Australian plate is forever crashing into the Eurasian plate, folding mountains toward the sky. I imagine that an anxious god might nibble at the top of the mountains as they crinkle upward. But I don’t think about tectonic plates as much as I used to.

My nails litter the sidewalks of cities I’ve lived in, the gaps between seats on trains, the carpets of classrooms, the floors of coffee shops. Oh stop it, my mother says, swatting my hand away from my mouth, it’s bad manners, it’s unhygienic.

Sometimes I wonder if there’s anything left of me wedged between the creaky floorboards of a dark Tudor house on Woodbury Street, where the banging of radiators during that snowy Ohio winter always sounded like the footsteps of his parents coming home early.

Or perhaps pieces of me are still congregating with dust bunnies beneath the acolytes’ pew at St. Paul’s, or among the racks of red choir robes, or up in the bell tower where if you listened very carefully you could hear the vibrations of old Anglican hymns in the silent air that hangs between bells. I wonder if pieces of me are up there, still listening.

Is this my body? I ask myself, flicking away a sliver of fingernail or staring down at rusty redness unfolding in the toilet. Is this my body? I rinse the tiny hairs out of the razor I’ve used to shave my legs. I balance a stray eyelash on my forefinger and try to think of a wish.

Sometimes I catch my mother looking at me and I wonder if she is wondering is this my body? Wasn’t that body once part of my body? And what was the moment when she became a body of her own?

And perhaps, looking at my body, she feels the violence of our separation all over again, when I broke away from the boundaries of her body, coming out of her the way you’re not supposed to, which is to say that I dipped my toes into the outside world first, just in case I changed my mind, just in case I decided that I didn’t want to have edges to myself after all. Sometimes it’s easier to dwell inside of someone else’s edges, never worrying about where you begin and end, where the outside world begins and ends.

Nail biting is a thoughtless habit, but chewing can be a lot like thinking. You do it over and over again without having anything to show for it, yet it can still be satisfying in a way that most things aren’t. After ruminating over nail biting on and off for a decade or so, I’ve come up with a theory that most types of anxiety boil down to an anxiety about edges: the edges of this room are too close to my own edges, my stomach folds over itself like so many dog-eared pages, that person’s edges are too close to mine, is he going to touch me, please don’t touch me, my edges are too far apart from each other, look at all this space I occupy within the edges of this rectangular mirror, look at how wide my thighs spread on the seat even when I press them tightly together, how could I have let him inside of my edges, how could I have refused, how could I have refused.

It’s nice to have complete control over your own edges, to prohibit them from involuntary change. But to know your own edges requires also knowing what is beyond them. The air floating nearest to my skin is warmed by its proximity to my blood. This is the space where the scent of me lives, a mingling of bodily molecules and hair products (for unruly curls) and lotion and deodorant and, sometimes, a perfume that supposedly smells like sheer love. I carry this cloud of scents with me and sometimes other people’s clouds come close enough to mix with mine.

I used to imagine God like that: an immeasurable fluid, always touching every inch of me. Or sometimes I was a continental plate, trembling and drifting on top of a God-lithosphere whose currents were so ubiquitous that you couldn’t even always feel them.

But I don’t think about tectonic plates as much as I used to. My schooling is different these days, and I nibble on my pinky-nail as I read Kierkegaard’s Fear and Trembling. The so-called father of existentialism shows me a god shouting down to me from far, far away, telling me that I must sacrifice my child to him. What kind of a god would say such a thing. A god you could never touch, a god who would never crouch to wash your feet, would never let you draw nearer to press your fingers into his wounded hands and wounded side. Would never offer up his brown, broken skin and point to the places where the outside world had been allowed to enter: a nail here, a spear there.

These days, we know that we mustn’t touch each other’s open wounds. Tiny inhabitants dwell in our bodies that we could never have imagined, and our bodies’ edges are not what they seem. I always carry hand sanitizer with me.

I have read too much, trapped in Kierkegaard’s “double movement” of infinite resignation and infinite joy, and he tells me that I therefore must not, cannot speak. Men have so many ways to silence you.

There was once a boy who didn’t ever bite his nails. He cared a lot about the appearance of his hands and kept each nail perfectly trimmed. He couldn’t stand the coarse black hair that grew on the backs of his hands so he shaved them down to the wrist. His arm hair stopped right there in the way that a sleeve would. I liked watching him shave his face in the bathroom mirror, but he never shaved his hands in front of me.

His shiny black eyelashes were so thick that they would often float down to his cheeks, and it was the perfect excuse to touch him. I’d hold the lost eyelash lightly in front of his lips and say, make a wish.

His toenails always grew in wrong, and every few years he had to get minor surgery on them to keep them from slowly destroying his toes. It bothered him a lot that they didn’t look quite normal. But they were only different if you looked closely, if you were, for instance, crouching to kiss his feet in the tender moments after oral sex. He was the kind of person who would then offer you a mint, but would never insist. He was the kind of person who could bear to taste the residual semen that clung to his lover’s tongue and teeth. This is a kind of intimacy that I do not fully understand but I know that it must mean something, when your edges have been blurred so entirely, so utterly erased that such a taste does not repulse you.

We both liked the idea of the intimate digestion in my body: unnatural-yet-natural, me-yet-you.

If most types of anxiety really do boil down to an anxiety about edges, then this boy would be an excellent case study, with his shaved hands and self-destructive toes, and, of course, his preoccupation with circumcision. He was a standup comic, and this preoccupation even made it into some of his bits. For example: Abraham is chatting with God and you know, they’re getting along okay because he’s Abraham after all, and God says to Abraham, Can you do me a favor? and Abraham says, Sure God, anything, and then God says, I want you to cut your dick off.

Then he’d pause for laughter.

But it wasn’t just the standup routine. He was the kind of person who would crack jokes about an absent foreskin while a girl was on her knees in front of him. He did not believe in God, and probably still does not believe in God, but that’s hard to say. It’s hard to say ‘does.’ The linguistic problem is that the two of us cannot coexist here in the present tense, a place where we once allowed our scents to mix with each other, crumbling into each other like continental plates. But of course he left so much more inside of me than I left inside of him.

And in the end, he asked me to sacrifice my only child and I said, I’ll have to think about it and that was not good enough. He was always kind. I wanted to tell him that Fear and Trembling is really just a long-winded justification for why Abraham didn’t tell Sarah about the impending sacrifice of Isaac. There it is: the birth of existentialism, all bogged down in explaining away a husband’s poor communication skills.

And can you imagine what Sarah would have said, what she could have said, if Abraham had told her before going out to the mountaintop that he would sacrifice her only child. How could she have refused.

ANNA HUNDERT B’18 encourages you to call the National Sexual Assault Hotline if you need help: 800-656-HOPE(4673) or visit RAINN’s online hotline at hotline.rainn.org.