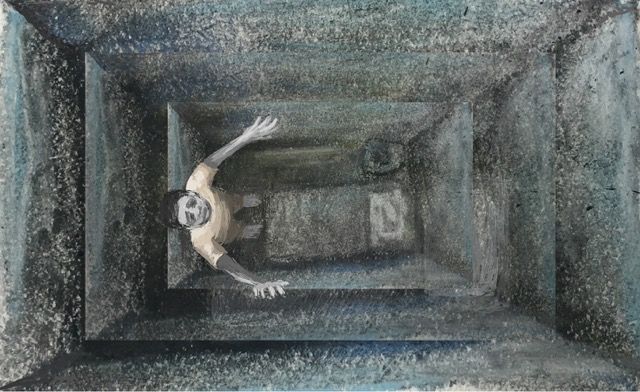 “It’s like being buried alive,” stated an inmate incarcerated in a solitary unit at Rhode Island’s Adult Correctional Institution (ACI). The box, as those who have spent years in solitary often call it, is an eightby ten-foot concrete room smaller than a parking space. In Rhode Island, prisoners condemned to solitary confinement spend 23 hours a day in complete isolation, restricted from access to recreation (except for a lone hour in an outdoor cage), prison programming like GED courses, phone calls to loved ones, or physical human contact of any kind. A snapshot released by the RI Department of Corrections (DOC) in May showed that 6.4% of the state’s incarcerated population, or 196 people, are currently being held in administrative segregation or closed confinement—which, like the Bush-era euphemism, “enhanced interrogation,” is simply the indirect rhetoric that correction officials have used to dress up the facts of torture.

Many incarcerated people spend extended periods of time in conditions like this, often enduring years and even decades without interacting with other incarcerated people, non-incarcerated people, or the natural world. Anthony Graves, who was incarcerated in Texas and spent 18 years in solitary before being exonerated on all charges in 2010, described solitary in TIME Magazine as “a system that seems designed to break a man’s will to live.”

Through studying the use of solitary confinement in the United States over 200 interviews and psychiatric diagnoses, Harvard psychiatrist Stuart Grassian concluded that solitary has intensely negative effects on the mental health of the roughly 80,000 incarcerated Americans subjected to it daily. Incarcerated people who spend more than 15 days in isolation suffer deeper psychological trauma than those not in solitary, including irreversible psychological disorders like chronic depression, general paranoia, self-harm, and outbursts of violence. Furthermore, people in solitary developed behavioral disorders at higher rates than those in the general population (28% vs. 15%), according to the Clinic for Forensic Psychiatry. Even though people in solitary make up 3–8% of the nation’s population of incarcerated people, they account for about half of all prison suicides. This statistic doesn’t take into consideration individuals like Kalief Browder, a New York City teenager incarcerated in solitary for two years without a trial for allegedly stealing a backpack, and who took his own life in June 2015 outside of prison. Venerable figures such as Nelson Mandela have called the crushing isolation and mental exhaustion of solitary “the most forbidding aspect of prison life.” UN Special Rapporteur (and former Argentinean political prisoner) Juan Mendez has led the charge for the practice to be banned internationally for over 15 days as a violation of the UN’s Convention against Torture.

The United States is alone among democratic nations in its extensive use of solitary confinement. Solitary has historical roots in Quaker methods of imprisonment, exemplified by the opening of Philadelphia’s infamous all-solitary Eastern State Penitentiary in 1829. The practice, known as the ‘silent system,’ died out in favor of prison labor and was rarely used in the United States by the late 19th century. Surveying the use of solitary confinement in 1890, the United States Supreme Court found that “even after a short confinement, [inmates] became violently insane; others committed suicide; while those who stood the ordeal better were not generally reformed.”

However, in conjunction with the rise of mass incarceration in the late 20th century, legal and popular opinion shifted away from regarding solitary confinement as a violation of the 8th amendment’s ban on cruel and unusual punishment. And many activists and scholars have pointed out that the increased use of solitary confinement has dovetailed with the expansion of mass incarceration, and that the practice fulfills incarceration's systemic mission of racial oppression and control. “People of color are disproportionately placed in solitary confinement and segregation,” AJ Yolken, a member of the Providence chapter of the national prison abolition organization Black and Pink, told the Independent. While the federal government does not keep track of racial composition of inmates in solitary, a study by the New York City Department of Health and Mental Hygiene found that incarcerated Black and Latinx individuals are 2.25 and 1.65 times more likely to be put into solitary than their white counterparts. They are also more likely to be diagnosed with mental illness in conjunction with solitary.

As in the system of mass incarceration writ large, the use of solitary confinement relies upon punishment doled out with little justification or accountability. In recent years, prison officials have been punishing incarcerated people with year-long stints in solitary; positive drug tests, disobeying orders, or even using profanity are arbitrarily assigned as reasons. In South Carolina, 16 incarcerated people were sentenced to a decade in solitary and more for giving family members login access to update their Facebook profiles. WikiLeaks whistleblower Chelsea Manning was reportedly put into indefinite solitary confinement in Fort Leavenworth, Kansas for obtaining a Cosmopolitan magazine and possessing expired toothpaste. In response to a 2015 lawsuit by the ACLU, New York State has cut the role of non-serious and petty offenses from violations leading to confinement.

Rhode Island, however, has not followed suit. Rhode Island’s penal code punishes incarcerated people with solitary confinement for actions like swearing, poor personal hygiene, or holding hands. People incarcerated in Cranston’s Adult Correctional Institute (ACI), Rhode Island’s only state prison located just 10 minutes from downtown Providence, confirm this trend. The state prison system “locks people in solitary for non-problematic reasons,” one currently incarcerated inmate wrote to the national anti-solitary advocacy project Solitary Watch, “like if you identify as LGBTQ, put in lawsuits, or express your political views…they tend to throw you in solitary for a long period of time.” Even a suicide attempt, considered a circumstance requiring personal and medical attention in almost any other circumstance, can and has led to additional time in solitary in the ACI. In 2015, there were over 4,347 infractions which resulted in some form of punishment—including solitary—at the ACI. More than half (2,303) of these infractions were a result of vaguely categorized “disobedience,” while only 18% of infractions were given out because of violence. More and more, solitary confinement is being used as a means to assert dominance over incarcerated people.

Measuring instances of inmate violence is often a false justification for further intervention and control. As stated in a letter by a member of Black and Pink who is currently incarcerated in the ACI, correctional officers “are not trained to care for prisoners [with mental illness] and their response to abnormal behavior only exacerbates the situations that arise due to prisoner mental health disabilities. Thus, prisoners find themselves being punished due to their mental health issues and inability to cope with stress-filled, oppressive environments.” As it stood last year, 15-17% of the ACI’s population has a Serious Persistent Mental Illness (SPMI), including 10.8% of the population in solitary. The use of segregation and solitary confinement for inmates with SPMIs only exacerbates their conditions and exemplifies the frightening reality of a prison system which locks the most vulnerable in our society into solitary.

In conjunction with Black and Pink and other community organizations, lawmakers led by State Representative Aaron Regunberg (D-Providence) and Senator Harold Metts (D-Providence) proposed legislation earlier this year that would limit solitary confinement at the ACI to 15 days. House bill H7481 would also ban the use of solitary on vulnerable populations, including pregnant women, juveniles, and people with mental illness. However, longtime state DOC director A.T. Wall and Rhode Island Brotherhood of Corrections Officers union (RIBCO) president Richard Ferruccio both vehemently opposed putting limits on solitary, and were successful in tabling Regunberg’s bill in the House for the 2016 legislative session with the support of House Speaker Nicholas Mattiello (D-Cranston). The ACI, where most of the RIBCO staff work and vote, is located within Speaker Mattiello’s district in Cranston; Ferruccio’s union was a large campaign contributor to Mattiello in his contested Statehouse race this cycle, which the Speaker won by 85 votes.

The main line of reasoning DOC and COU officials gave in opposition to the bill was that it would “take away their ability to keep the ACI safe.” However, this claim is not supported by any evidence linking the practice of solitary confinement with a successful reduction of violence among incarcerated individuals. For example, because of recent reforms, Colorado’s prison system has fewer people in segregation than Rhode Island, despite an incarcerated population around seven times larger (19,619 vs. 3,125) than the Ocean State. As a result, not only did so-called ‘inmate-on-staff violence’ fall to its lowest level since 2006, but mental health among incarcerated people improved as they were taken out of an environment that exacerbated anxiety and depression. This pattern has been documented in other states across the country that have total autonomy concerning the rules and regulations on solitary in the state prison system. In Mississippi, the state reduced its entire solitary unit population from 1,000 to 150 prisoners, saving $8 million annually and reducing the level of prison violence by 70%.

Governor Gina Raimondo has the legal authority to effectively end solitary confinement in Rhode Island, as she could direct DOC Director Wall to ban the practice among juvenile and mentally disabled incarcerated people and limit it otherwise to a 15-day period. She could also direct the DOC to implement serious administrative reforms, including the introduction of a ‘step-down’ incentive program based on successful initiatives like Washington State’s Intensive Transition Program, which eases people incarcerated with chronic behavior problems out of solitary through a step by step curriculum which includes anger management and group prison programming. This has proven effective: since implemented, there has been a 50% drop in the number of people the state keeps in isolation.

If the governor fails to act in the best interests of incarcerated Rhode Islanders’ human rights, there are other ways forward. In lieu of substantive action from state government, a House Judiciary Commission was created to study this issue; the 19-member commission (which includes Wall, Regunberg, and Ferruccio) met for the first time on September 29, only 12 audience members were present. The Commission is scheduled to present its findings before the start of the legislative session in January 2017, till then it is important to work with local community organizations to continue to put external pressure on state lawmakers to take concrete action for the human rights of incarcerated Rhode Islanders.

In working towards an ultimate goal of ending mass incarceration, putting an end to solitary confinement in Rhode Island deserves urgency and anger. The legal restriction of solitary confinement practices in Rhode Island and across the country would provide relief to incarcerated prisoners, boxed-in and in mental distress. As stated by State Senator (and prison deacon) Harold Metts, “We cannot in good conscience call our prison a ‘correctional’ institute when the system relies on a punishment that is essentially designed to cause mental breakdown.” Until addressed, the use of solitary in Rhode Island should continue to be considered a social failure on every level.

GABE ZIMMERMAN B’17 wants the state of Rhode Island to end solitary.