A conversation with Sandor Katz 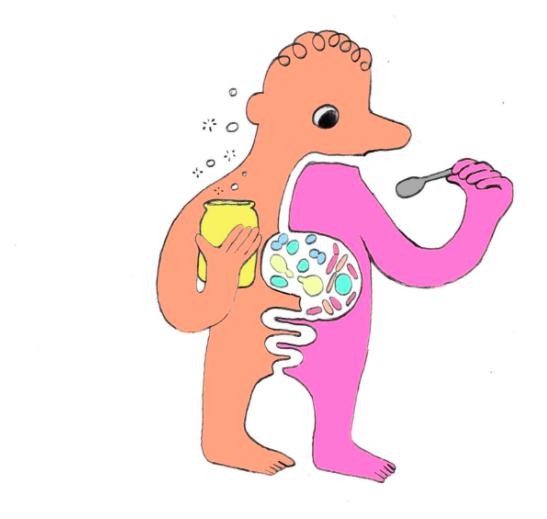 Using some of Sandor Katz’ fermentation recipes, I’ve cooked up Sweet Potato Fly, Ginger Bug, and Rice Beer. Hailing from rural Tennessee, Katz is a well-known fermentation expert and advocate, described by the New York Times as “one of the unlikely rock stars of the American food scene.”

His work, as an author and fermentation workshop instructor, embraces self-sufficiency and accessibility. In a time of industrialized food systems, Katz encourages everyone to become more engaged in creating and understanding their food. He believes DIY fermentation offers a flavorful alternative to the problematic organization of monocultures, synthetic chemicals, and CO2 producing transportation systems.

Though he acknowledges that reclaiming food is not just about fermentation, Katz discovered that many of the questions that arise once you start interrogating your food—how it is produced, where it came from, and by what process it was made—can be answered by fermentation.

The fermentation of food is an ancient practice, the earliest record dating back to 6000 BCE in the Fertile Crescent. Today, grocery aisles are filled with fermented products—from bottled beer to kimchee. Yet fermentation is much more than the process of converting carbohydrates to alcohol. The anaerobic conditions and chemical conversions can be used to create bread, sauerkraut, yogurt, olives, cheese, and vinegar or be applied to a variety of vegetables, fruits, dairy products, grains, beans, and meat.

As a leading educator within the field of fermentation, Katz’ knowledge goes beyond the “bougie” applications consumers typically think of, like $7 bottles of kombucha­, to introduce a variety of recipes within his books—from kvass to sourdough. Beyond providing instructions, he also delves deep into fermentation, discussing its multifaceted anthropological history and cultural significance while also revealing its specific biological processes.

His work promotes tailoring our food consumption to facilitate the healthy symbiotic relationship we have with microorganisms. In a telephone conversation with The College Hill Independent, Katz discussed the dangers of antibacterial soap, a new fermentation recipe discovery, and his long-lasting love of sauerkraut.

The College Hill Independent: How do you think fermentation plays into human-to-human interactions as well as microscopic relationships? How can we make friends, not enemies with bacteria?

Sandor Katz: I taught my first workshop in 1998 and I was always sharing products of fermentation with people, so it’s definitely been an ongoing part of my life. As soon as I started teaching fermentation workshops, I recognized that there was a huge interest. A lot of people are interested in fermented foods and a lot of people are afraid of fermented foods. People project fear onto the process of fermenting foods, because we’ve been taught to be afraid of bacteria and because we have this narrative about good and bad bacteria. So people feel afraid and kind of disempowered. They imagine that these processes are somehow complicated, that you need to be able to identify the bacteria to make sure that the right ones grow, but in fact, according to the US Department of Health, there has never been one single case of food poisoning or illness documented from fermented vegetables. That’s a very impressive safety record. Mostly I try to demystify the process for people, make them realize that it isn’t something scary and risky. It is straightforward, incredibly safe and easy.

The Indy: Your book, the New York Times bestseller The Art of Fermentation, as well as Wild Fermentation and The Revolution Will Not Be Microwaved have inspired many people to get involved with food activism and fermentation. What initially got you involved?

SK: When I moved from New York City to rural Tennessee in 1993 I definitely had a background in all different kinds of activism. When I got involved in gardening and producing food, there was a kind of reclaiming to it. I was reclaiming skills that in the past would have been common everyday skills. But in our society, where fewer people are involved in food production, most of us are obtaining our food from the system of mass production and distribution. Many of us have been developing a critique of that food system—the diminished nutritional quality of food that has been produced through that system, the environmental destructiveness of the mass production of that food, factory farming, chemical agriculture, and the economic ramification of taking food production out of our communities.

As I was getting involved in learning food production skills and getting to know other people that were similarly motivated to learn about food production I just sort of conceptualized it as a grassroots movement to reclaim food. That became even stronger after Wild Fermentation came out and I went out on my book tour. People come at [the food movement] from a lot of different angles, but there is a shared sense that our food supply has been largely hijacked by large profitdriven actors. What can we do to reclaim our food?

The Indy: Can you explain the perceived difference between good bacteria and bad bacteria? As a culture, are we too obsessive with our antibiotic usage?

SK: We don’t know enough about bacteria to categorize it according to our value system. In terms of targeting individual species, microbiologists are coming to the conclusion that the concept of species does not even apply to bacteria because they have so much genetic flexibility that any bacteria could become any other kind of bacteria. I think more helpful than characterizing individual bacteria as being good or bad is talking about microbial communities. Healthy microbial communities self regulate. They’re very competitive environments. Our major line of defense against the relatively small amount of bacteria that can manifest as illness in human beings is bacteria. So the antibacterial soaps that are promising to kill 99.9% of bacteria gets rid of what protects us from the .1% of bacteria that can get us sick. By repeatedly using products that kill the bacteria on our hands, on the surfaces all around us, we’re making ourselves more vulnerable to bacterial disease.

The Indy: Can you speak more on how fermented food cultivates healthy microbial communities?

The Indy: What do you think of current fermentation trends, like kombucha? How do you see fermentation being further integrated into contemporary diets?

The Indy: Part of your practice, as a writer, educator and fermenter, is encouraging everyone to get involved in the fermentation process. What is an easy way to get involved with creating fermented cultures?

SK: I would encourage anybody to start fermenting vegetables. It’s straightforward, you don’t need to get any special starter cultures, there’s no risk whatsoever, it’s easy, it’s incredibly delicious and it supports good health. I think there’s so much to recommend it. It’s a great place to start and people can be incredibly creative. Fermented vegetables are not just sauerkraut. You can mix up the type of vegetables you are using and how you work with them.

I am continually experimenting with new things. Just this week I made a batch of gochujang, which is Korean fermented chili paste. I found some directions in English and was able to assemble the ingredients. My learning curve has been ongoing. When there’s something you want to make you just have to understand the principles involved. Fermentation is about somehow manipulating environmental conditions to encourage certain organisms to grow while simultaneously discouraging other organisms from growing. This isn’t done in laborites with microscopes; fermentation emerged in ancient, simple kitchens.