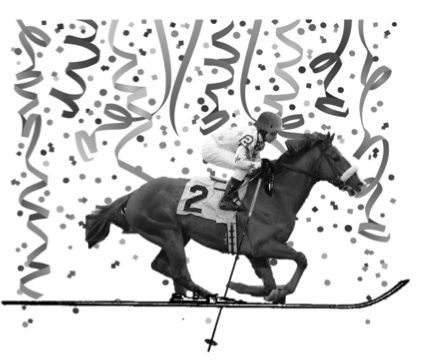 His legs are well-muscled, taut, rippling. He is nimble. When you hear his name you think of consummation, ultimate pleasure, Dionysian joy. He has hooves.

You’re guessing that I’m talking about Pan, the randy forest satyr. But you’re wrong—it’s actually a horse of which I speak. The horse is named Giant Finish, and he is the most recent entry to Saturday’s Kentucky Derby.

Giant Finish is a successful horse who has won over $130,000 in his career. Most recently, he came in second place at the March 2 John Battaglia Memorial Handicap at Turfway Park, in Florence, Kentucky. At press time, he is in the back of a van being driven to Louisville, where he will race other horses around a track.

But before he gets there, before he has the chance to make the future, you ought to know a little about his past. For example, who is Giant Finish’s mom? If you were wondering, his mom is Apocalyptic, a female horse from New York. Also, what’s Giant Finish’s affiliation (“horse squad”)? In answer to that he races for Sunrise Stables, of Versailles, Kentucky.

Finally, who is the human behind the horse? Actually, there are always many humans—jockeys, trainers, owners—behind every horse. With that in mind, you ought to recognize that there is one man who is particularly—even intimately—connected to the Giant Finish story. That man is Adam Cohen, who bred the talented colt. In other words, Cohen set up Apocalyptic (Giant Finish’s mom) with Hickman Creek (another horse, male)—and when the two of  ’em had a baby, it ended up being Giant Finish. Well done, Adam.

Still, Giant Finish is a newcomer, and he’s no top seed. But his breeder is hopeful. “He’s been training well and you don’t get a lot of chances to get to the Derby. He’s got a really competitive nature. We know he’s a longshot,” Cohen told Blood-Horse, an equestrian magazine. “What can I say? You only live once.”

Monday, April 29. A white tablecloth over a long banquet table. On the left, a cohort of Japanese men in suits and ties huddle close with forks and knives; a cohort of Russians, big-bellied and bald, whisper to each other on the right. No one really speaks the other’s language, so instead they trade gifts. Prime Minister Abe Shinzo offers a pair of skis and a ski outfit to the Russians. President Vladimir Putin offers a bottle of wine from 1855, the year the two countries once signed a treaty of friendship.

It’s hard to tell whether the news here is that World War II is almost over or that it is still not over. But over this tableclothed luncheon, Russia and Japan moved one step closer to eating the apricot. “67 years after the conclusion [of WWII]”—after the bomb, after V-day, after lots of handshakes—leaders of both countries agreed that the situation “looks abnormal.”

Their battleground stretches out from the Northern tip of Japan, an archipelago of 56 islands that dot the Western Pacific. In Russia, they are known as the Southern Kuriles. In Japan, they are the Northern Territories. 6,000 square miles and 19,000 people—some of them Japanese immigrants, settled as early as the 17th century Edo period; others from Russia, explorers set out to hunt sea otters. In the Russo-Japanese War, the islands became Russian; in the Siberian conflict two decades later, they became Japanese. And in 1945—when Stalin gathered with Churchill and Roosevelt at Yalta—Russia again claimed the islands from “the treacherous attack of Japan.” That was six months before Japan’s surrender to the allies, and the dispute over the territories has never been settled.

And for good reason: they are beautiful little grass-covered things. Volcanic smoke sweeps downward into the valleys where streams of sulfur trickle toward the shore. The fish are plentiful. A few years ago, Russian state TV showed a plump President Dmitry Medvedev chugging down caviar and joking with local fishermen. Japan found Medvedev’s visit—now patting his napkin to his pursed lips—“an unforgivable outrage.”

“Vive la guerre!” they scream. But no one can hear them—Putin is skiing and Abe is drowning in century-and-a-half old wine. —DA