On law enforcement disparities between Standing Rock and Oregon 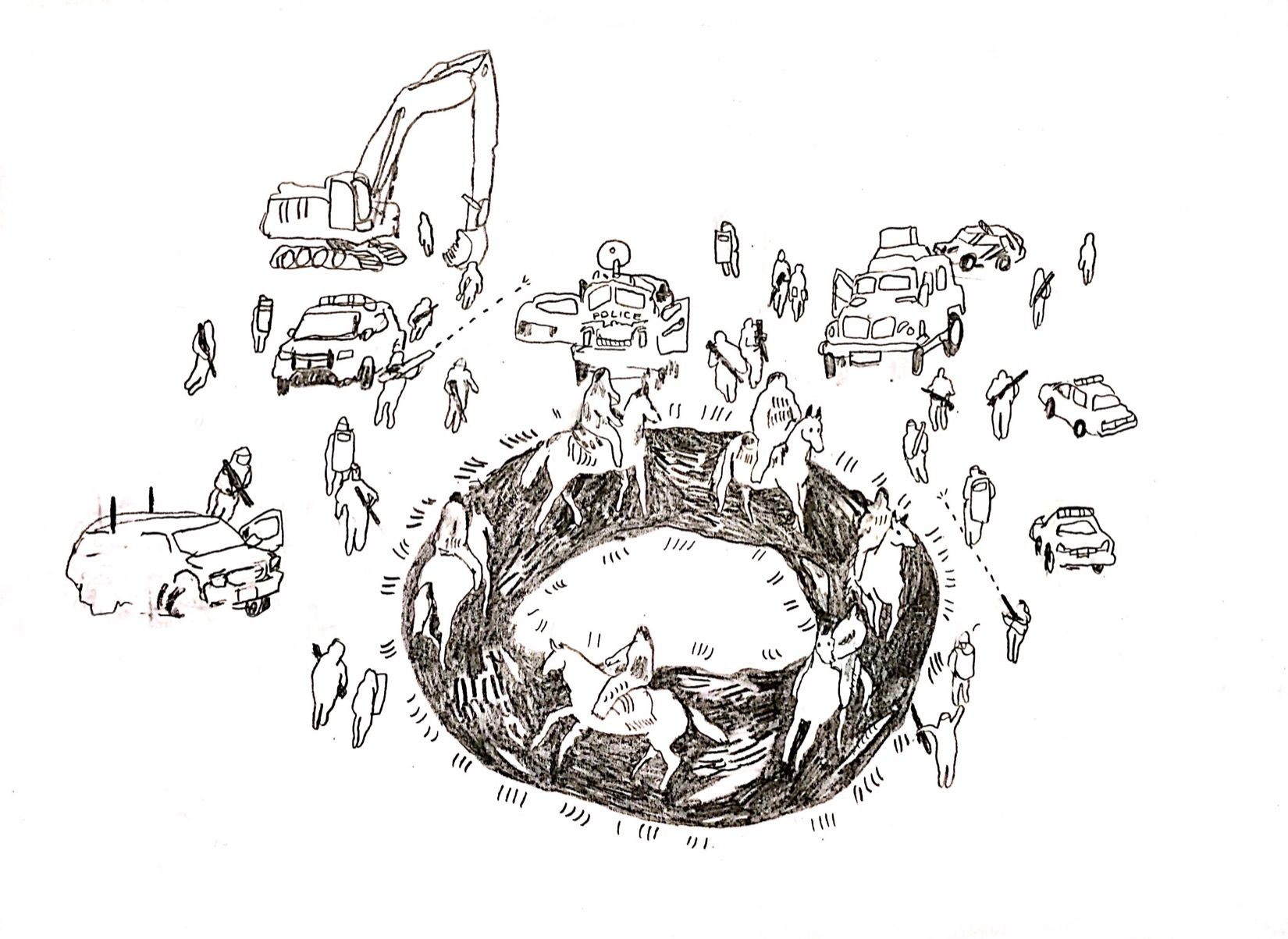 On October 27, the arrival of military tanks abruptly interrupted the prayers of water protectors at the Sacred Stone Camp in the Standing Rock Reservation. In an unprecedented escalation of violence, law enforcement officials from North Dakota, armed with batons and dressed in riot gear, raided the area. “Militarized law enforcements agencies moved in on water protectors with tanks,” said Dave Archambault II, the Chairman of the Sioux Tribe in a press release. “[W]e continue to pray for peace.”

For months now, the Standing Rock Sioux Tribe has peacefully resisted the construction of the Dakota Access Pipeline (DAPL), an oil pipeline stretching 1,100 miles from North Dakota to Illinois, that would compromise water access for this indigenous community of about 8,200. Originally, Dakota Access had planned to build the pipeline just outside the city of Bismarck. But residents of the state’s capital, 94% of whom identified as white according to the 2010 US Census, feared that the project would expose them to poisonous water. Soon DAPL was rerouted to go through Standing Rock, the home of a community of Native Americans​​. With the relocation of the pipeline, the burden of compromised access to living resources was placed on indigenous people.

Responding to this injustice, members of the Sioux Tribe peacefully rose to defend their rights to drinking water. Their resistance efforts drew the attention of journalists, activists, celebrities, and thousands of sympathizers across the country and world. Numerous indigenous groups from around the world flew to the reservation to join the movement. “We all face threats to our lands and waters from extractive industries and other exploitive practices,” said Jennifer Weston, a member of the Sioux Tribe, in an interview with the ​Co​llege Hill Independen​t published last month​. But what had been a site of community and prayer turned into a place of fear and tension last week. The colorful flags that delineate the camping area suddenly came into high relief with the black military gear of law enforcement agents.

“T​here were police walking around everywhere with assault rifles,” said Tara Houska, a member of the NGO Honor the Earth. In an interview with Amy Goodm​an from ​Democracy Now! Houska, who was present during the confrontations, said she saw police arresting dozens of people. Allegedly, some officers smiled and laughed while conducting the arrests. “[It] was a ​shameful moment for this country,” Houska expressed. A video of the ​confrontation filmed by ​Unicorn Riot shows policemen deploying tear gas, pepper spray, and smoke grenades at unarmed, peaceful protesters. Attempting to dismantle the blockade put up by water protectors leading up to the camp, police dragged women by the hair, shot rubber bullets, and arrested at least 142 people. A no-fly zone was also established in the area. And while law enforcement agents advanced using considerate amounts of violence, water protectors remained non-violent.

“To protect the water, we must remain peaceful and prayerful,” said​ Dave Archambault II in a message published through the Sioux Tribe’s Facebook page. “​We must not resort to the corruption and violence our people have endured.” Even now, after the recent incident of police repression, the water protectors have maintained their commitment to peaceful disobedience. On October 30, in response to the police attacks, the Sacred Stone Camp called for an international vigil for Standing Rock. “Let’s create a global container around our brothers and sisters on the ground so that they may heal from the very traumatic experiences that they suffered,” said Lyla June, a community organizer and Native American woman, in a video promoting the event on Facebook. “Let us also pray for our brothers and sisters in uniform... because they are of our human family as well.”

On the very same day that North Dakota enforcement agents repressed indigenous people in Standing Rock, a group of white protesters were pardoned in Oregon for taking over the Malheur Wildlife Refuge in Harney County, Oregon earlier this year. ​In January, 27 armed protesters took over the Refuge, a sacred land belonging to the Burns Paiute tribe.​“The protesters are a little vague about [what] they plan to do here now​ that they control these buildings,” Martin Kaste of ​NPR says. “They say they just plan to stay put and, as they put it, ‘unwind’ the federal government’s ownership of this wildlife refuge.” For 41 days the militia occupied the sanctuary, until the final arrest was made on February 11, 2016. Seven protesters were put on trial in the Oregon standoff case, including leaders Ammon and Ryan Bundy, but were found not guilty of conspiracy to impede federal employees from discharging their duties. ​The occupation was, in part, motivated by the 2015 resentencing of Dwight and Steven Hammond—two white ranch workers from Oregon—for arson of land owned by the Bureau of Land Management (BLM). ​“When the Hammonds were originally sentenced [in 2012],” The District Attorney’s Office of Oregon put forth in a press release, “they argued that the five-year mandatory minimum terms were unconstitutional and the trial court agreed and imposed sentences well below what the law required based on the jury’s verdicts.”

In Oregon also, indigenous abuse unfolded. As the militia seized the Malheur refuge, the Burns Paiute tribe watched in horror as the Bundys sacrilegiously dismantled the tribe’s​ ​land. The ancient artifacts at the site were held and moved. In an arrogant display of violence, the Bundys bulldozed a sacred burial ground, protected by the Archaeological Resources Protection Act of 1979. The Bundys wanted the land to be given to ranchers. But the Burns Paiute asserted that they had roamed the land far before ranchers and farmers settled upon it. “Before white settlers arrived in the mid-1800s,” The Oregonian illuminates, “the Paiutes occupied territory throughout the northern Great Basin and into the Columbia Plateau and the central Oregon Cascades. Their land included the existing wildlife refuge, all surrounding ranches and every acre of federal land in Harney county.” In 1868, the tribe signed a treaty with the federal government that requires the American government to protect the Natives’ safety.

The acquittal, though celebrated by Bundy and his supporters, raises pressing concerns about land ownership, recognition,​ ​racial bias and unfair treatment under the law. The verdict of Oregon protesters, on the same day of the mass arrest of water protectors in Standing Rock highlights the privileges that the white ranchers and farmers possess. Despite possessing firearms and carrying out a barbaric land seizure, the Oregon defendants were released of charges. Meanwhile, in the Sacred Stone Camp, 142 unarmed protesters were arrested. It is clear that engagement in legal, peaceful civil disobedience does not exempt protestors of color from facing repression. Meanwhile, white protestors can carry their guns without fearing legal consequences.

Bundy and his supporters, mostly white ranchers, present less of a threat to the government than the water protectors at Standing Rock. Their seizure of the Oregon land presents no real, crucial hazard to American proceedings because land in Oregon is not pertinent to current domestic or foreign goals. The land is​ ​federally designated to the Paiute peoples, and the refusal of the government to seriously intervene in the land seizure, or provide adequate retribution reflects the systematic neglect of Native Americans in this country. Though Obama halted the construction of a portion of the Dakota Access project, executive action to end the pipeline is unlikely, as these type of projects are seen as a crucial part of the national energy policy. “Homeland Security classifies pipelines as critical infrastructure,” Aaron Bady writes for the ​LA Times, “potentially making it possible to prosecute the protesters as terrorists.”​ ​Notably​, ​the land at Standing Rock was put under federal protection in the Fort Laramie treaties of 1851 and 1868. In violently arresting Natives, the authorities​ ​disobey the treaties that they themselves historically agreed to.

Who has a claim to land in the United States? For centuries now, white populations have​ ​displaced indigenous people without facing severe repercussions. This country was​ ​founded on the forceful dispossession of​ ​indigenous people of their lands. What we see today at Standing Rock and Oregon is the perpetuation of a disastrous legacy of land discrimination and racially biased law enforcement. The mass arrest of indigenous protesters and the acquittal of Oregonian land defenders are painful reminders of persisting inequalities. That these​ ​two events could have happened on the very same day, however, stresses the pressing need for change.

While the verdict for Oregon has been decided, the future of the water protectors in North Dakota is still at stake. On October 31, in an uncommon demonstration of solidarity, 1.4 million of Facebook users ‘checked-in’ at Standing Rock. The action was aimed at confusing the Morton County Sheriff’s Department, who allegedly was using Facebook to track protesters. While the Department denied the accusation, the event demonstrated the wide support for the movement. The eyes of the world are on Standing Rock. And the struggle continues: “I can’t remember a time that I wasn’t being taught to stand up for human rights,” said Mekasi Horinek, a Native American activist at the Sacred Stone Camp in an interview with the ​New York Times a day after the confrontations​. In their efforts to halt the construction of​ ​the Dakota Access Pipeline, water protectors are fighting to rewrite​ ​a history of indigenous oppression. As ​Dave Archambault II stresses, “​[T]his is about our dignity as human beings.”

SHANE POTTS B’17 & CAMILA RUIZ SEGOVIA B’18 encourage you to visit standingrock.org and make a donation. Supplies, cash, or donations can also be sent to: ​Sacred Stone Camp P.O. Box 1011, Fort Yates, ND 58538