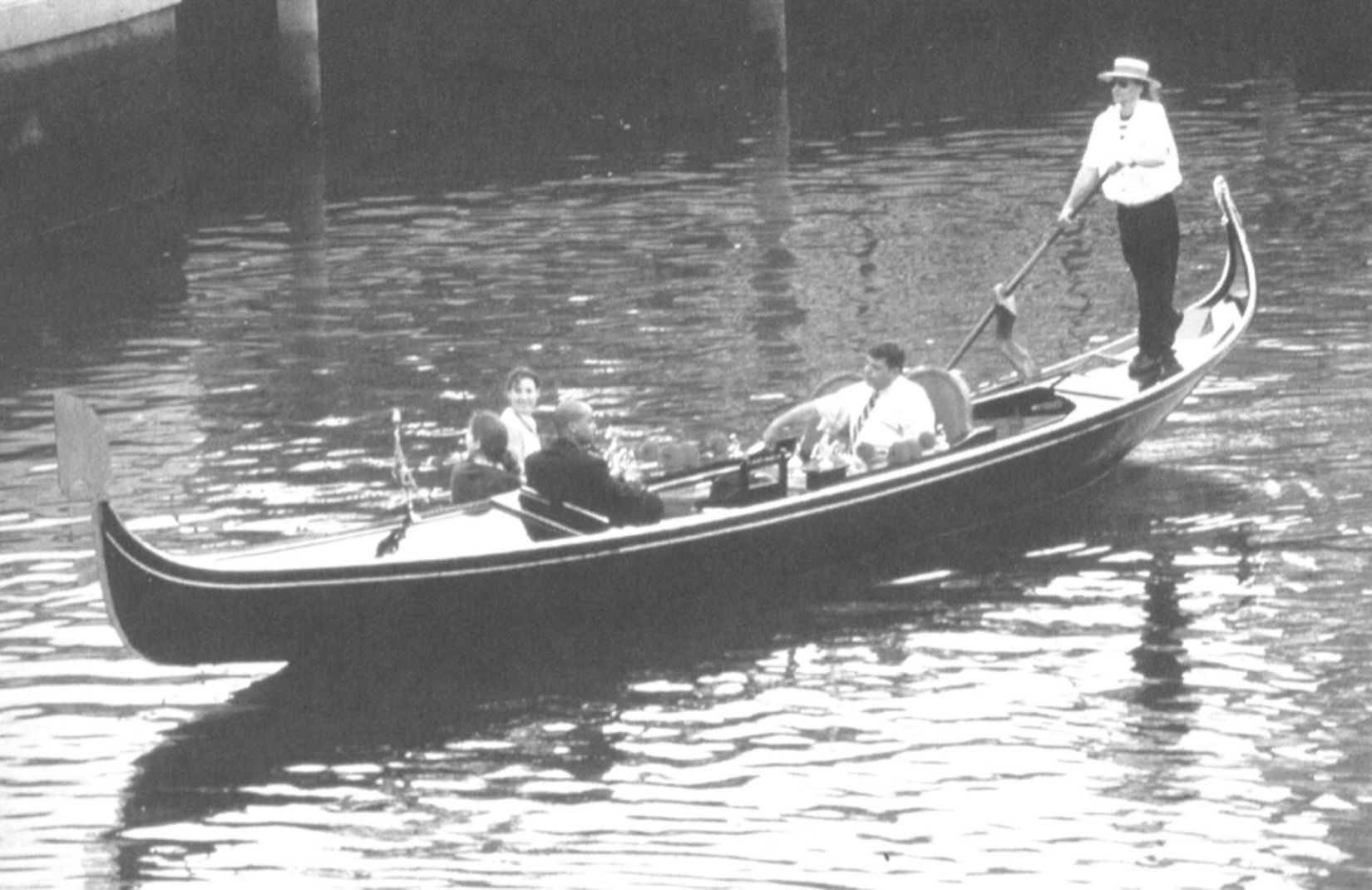 Photo from Providence, the Renaissance City

Matthew “Marcello” Haynes’ dock sits across the canal from Memorial Boulevard, where the Providence River cleaves into the Woonasquatucket. Haynes is the owner and head gondolier at La Gondola Providence, a business offering romantic and leisurely gondola rides along the Providence River. He was easy for me to spot, dressed in a traditional black-and-white striped shirt and a tan hat with a crisp blue ribbon around the brim. I opted to just call him Marcello—one of the three titles I found for him on La Gondola’s website, the first being “Matthew” and the third being “Il Boss.” Another gondolier, Luciano, sports the same hat, with a black ribbon rather than a blue one in his webpage headshot. Upon further inspection, I learned that Luciano is known as Derek in his free time.

Though Marcello runs the business now, he explained how he inherited it from his former employers. La Gondola got its start in Providence somewhat accidentally; its first owner had initially chosen Marco Island, Florida as the site for his gondola business, but he soon moved back to his Providence home to start a family (Marcello says he had a “bambina”). Having already procured his boats, La Gondola’s founder requested water access directly from Providence’s then-mayor Buddy Cianci, who offered unequivocal support. Cianci gave them a dock, and encouraged them to start rowing.

Marcello got involved with La Gondola during a summer home from Lehigh University. As a member of his school’s crew team, he naturally fell in love with the gondola business and decided to devote himself to it. Marcello grew up in Rhode Island but rarely came to Providence as a child; when he did, his mother advised him to “roll up the windows and lock the doors.” He remembers his impression of Providence in his youth—one of prostitution, drugs, and gangs. Back then, the canal was covered from the current Steeple Street Bridge to Crawford Street Bridge: a sprawl of parking lots, rotaries, and cement. Marcello says that today’s downtown looks very different from the downtown of his childhood.

Marcello’s customers come from all over, but he explained to me that slightly more than half are locals, while the rest are tourists. Of the 60% who are locals, most of them are on a date, or celebrating an anniversary. Marcello often recommends them to check out the Providence food scene—his favorite spots are nearby Café Nuovo and for the date night crowd: Ponte Vino.

Marcello told me that he considers the Providence River symbolic of the whole city and of downtown’s transformation. He acknowledges that Providence is more commonly branded as the “Creative Capital” today, but he says, “I miss when they called it the Renaissance City.” On La Gondola’s website, there is little explicit naming of “Providence,” but instead, large-font imploring browsers to “experience the Renaissance City from a unique perspective.” He told me that, just like the river, the city “was dead and now it is alive again.”

According to lore, Venice was founded at 12 o’clock noon on March 25, 421 AD. Its story is one of swamps and boats. The first record of gondola use in Venice is from the 11th century. By the 15th century gondolas functioned like a taxi system, with gondoliers making rounds at various ports throughout the city. But by the 16th century, these public gondoliers had earned a seedy reputation for robbery, violence, and occasional murder. In response, wealthy Venetians began to hire their own personal gondoliers, and the boats became status symbols rather than mere forms of transportation. Further, with the onset of motorized boats, gondola travel became an inefficient means of citywide transportation. Today, about 400 gondolas remain in Venice, all used for tourism.

Where Venice's gondolas were reduced to ornamentation during the Industrial Revolution, the gondolas in Providence today recall the city's success during that same period. Waterways have always been vital to the city’s development: in the 1800s, the current downtown historic district was a hub for nautical commerce. With an outer harbor on the Providence River facilitating additional economic activity throughout the 1800s, rivers were rerouted to best suit trade, such as the 1828 construction of the Blackstone Canal connecting Providence to Worcester, Mass. The inner harbor of the Providence River was built in conjunction with the railroad, which severely polluted the cove. When cars made rail commerce obsolete in the 1920s and ’30s, the city built a lattice of bridges covering the River. What was once open seascape formed a compact city. Amongst the shed exoskeletons of jewelry plants, the city continued to lay a crisscross of hurricane-barriers, ramps, and highways over the river’s polluted waters. The grayscale grit of roads was preferable to the scent of caked river sludge, it was conceded.

In 1981, architect Bill Warner sat with friends at Blue Point Oyster Bar on South Main and doodled possible futures for downtown on a bar napkin. Like much of the rest of America, Providence’s prosperity had followed the growth and death of its factories. In 1940, the population reached 253,504; by 1981, only 156,804 residents remained. As Providence residents continued leaving for the suburbs, city planners sought to bring people back into the city. Some city planners posited running the 1-95 over today’s canal as a solution to downtown’s decline. In 1983, Warner, concerned that this plan would render downtown’s rivers forever dead, proposed an alternative plan to uncover the river and reintegrate it into the economic and social life of downtown. Many city planners were skeptical, but with the help of planner Ron Marsella the city ultimately agreed to his proposal for Providence’s Waterfront. By 1991 construction had begun on the Memorial Boulevard Extension, thus relocating both the Woonasquatucket River and Waterplace Park. In 1994, the city held its first Waterfire.

Mayor Cianci strongly supported Warner’s plan. The plan dovetailed with Cianci’s revitalization efforts, which called upon European methods of urban planning. As the city’s first Italian-American mayor—following a  series of exclusively Irish mayors—Cianci capitalized on the project as one way among many to construct a brand for Providence that would be in line with the city’s long-standing Italian-American culture. Today, La Gondola, along with prominent Providence attractions such as Waterfire and Atwells Avenue’s strip of trattorias, sustains this vision and its attempted resuscitation of Industrial-era prosperity—albeit with a picturesque Venetian ideal that was never present during Providence’s rise. The gondolas sail through waterways made visible by the departure from the grit of the very factories that once employed Providence’s working-class Italians.

But Providence’s focus on a particular brand of Italian nostalgia neglects the current demographic reality: in total, Providence’s population is only 14 percent Italian-American, and Federal Hill, where Cianci’s grandparents bore thirteen children, now has a growing Latinx presence.

The attention that’s been given to the Providence River has come at the expense of revitalizing the city’s other waterways, often bordering neighborhoods populated by communities of color. On the dock, Marcello told me that “the river is the cleanest now it’s been in 170 years.” This is certainly true of the Providence River, but if you follow the Woonasquatucket River from Marcello’s dock down to Olneyville, the water becomes hidden beneath bramble and concrete. Much of the river remains underutilized and polluted, with toxins and sewage along the watershed. Further, while flood and hurricane barriers have successfully prevented flooding of the downtown Providence River, few such measures have been taken in other sections of the river. In the historic flood of March 2010, Olneyville (nearly half of which is located in a floodplain) was the hardest hit due to this lack of preventative infrastructure.

On La Gondola’s website, the gondoliers are cited as “lending authenticity to Providence as Providence lends authenticity to them.” La Gondola’s authenticity performs a vision of Providence’s past success, using a symbol rendered obsolete in its native Venice. This narrow representation of prosperity is just as obsolete here, mirroring the city’s inattention to the renovations Providence could use. By positioning Italian identity as central to Providence’s renaissance narrative, the city may be foreclosing a more comprehensive renaissance: serving neighborhoods and populations ignored by previous infrastructural and ecological reform.

SIGNE SWANSON B’19 can’t afford a $90 gondola ride, nor the suggested accompanying prosecco.