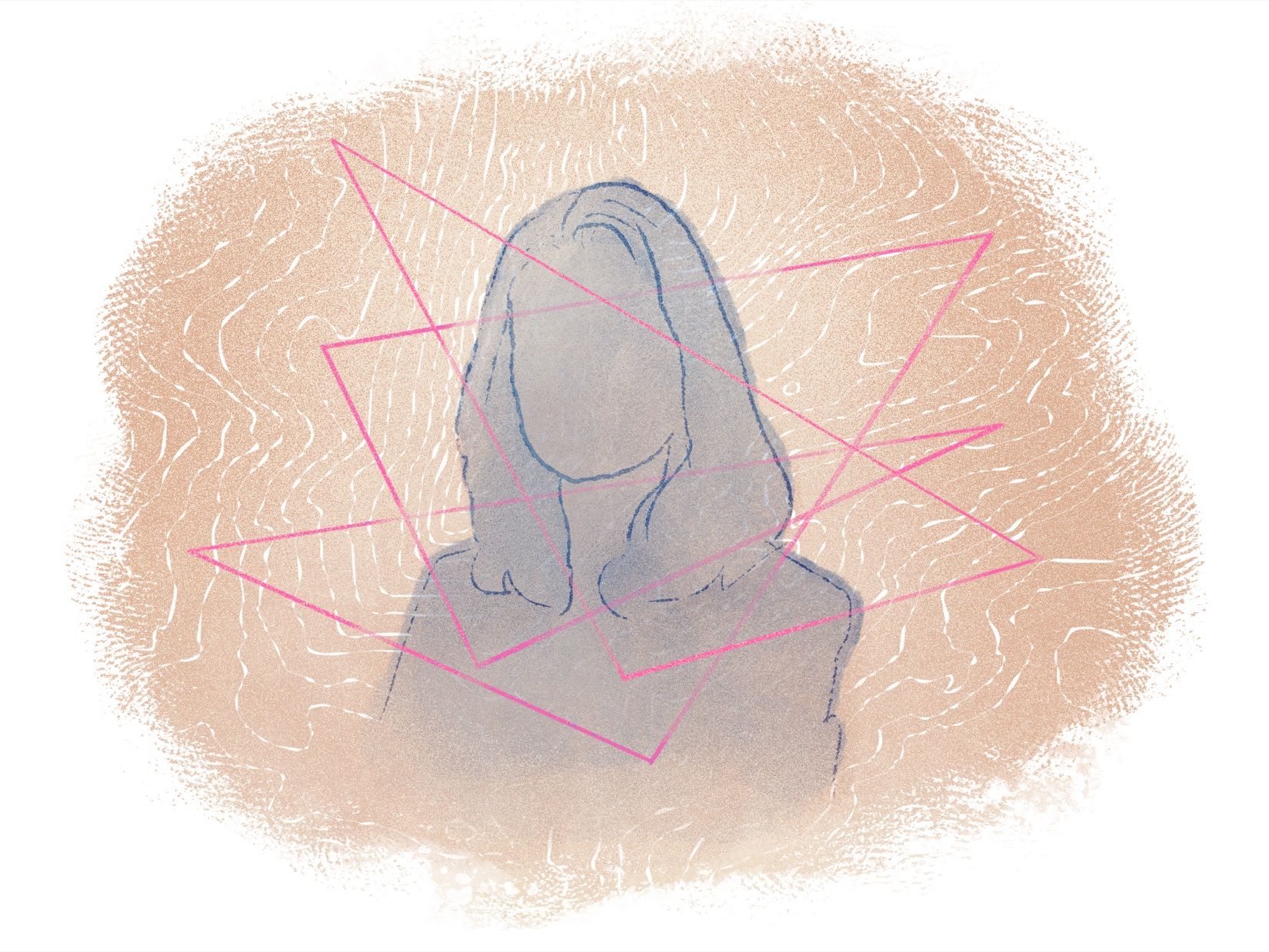 Try reading without reading. The first thing your eyes encounter is the appearance of the words, the absurdity of the shapes, the combinations of letters. They have the power to conjure entire words and beings but also trap them within their slants and curves.

My words create me but they also limit me. How can their wholeness tell you how fragmented I am? How can their logic apply when there is no thus, then, of course in me? I am is an implicit I am not.  Saying I am is also not saying Je suis, estoy, sono. My language is one you don’t know.

Last February, Pulitzer-prize winning author Jhumpa Lahiri published her fifth book, In Altre Parole (In Other Words). Lahiri is the daughter of Bengali immigrants and grew up in Rhode Island. Unlike her previous works—largely fiction—the book is a memoir, and instead of in English, her primary language, it is written in Italian and was published in the United States as a bilingual edition in Italian and English.

In Altre Parole is an account of her twenty-year long study of Italian, which she fell in love with during a college trip to Florence. She wrote it while in Rome, where she moved with her husband and two children in 2013. While there, she resolved to read and write only in Italian, effectively exiling herself from the language that had brought her so much success, including a National Humanities Medal awarded by President Obama in 2014.

There is a long history of authors rejecting one language in favor of another. Some have sought to escape the shadow of their predecessors, such as Samuel Beckett from James Joyce’s. Authors of works of postcolonial literature have sometimes chosen a native language over a colonial one—itself a subjugating presence—such as Kenyan writer Ngugi wa Thiong'o, who writes in Gikuyu rather than in English. In Lahiri’s case, she has said that it was a refuge from her own success in English. In addition, I believe that it is a powerful personal and political renunciation that calls attention to the consequence of language choice. In In Altre Parole, Lahiri experiments with a new voice between languages, setting a new model for exploring fragmented identity.

Her parents are Indian. So are mine. She grew up in America. I grew up in an American school. She became obsessed with Italian. I fell in love with French. Her physical appearance creates a wall between her and Italian. My accent communicates one thing, my appearance another, my language a third. Her mother tongue, Bengali, was foreign in America, so in some ways, she has always been in linguistic exile. I grew up in Tunisia, where my native tongue, Hindi, was foreign, and in ways foreign even to myself. The superficial similarities in our experiences expose a deeper truth: the act of learning, reading, and writing in another language is the contentious claiming of an identity.

Lahiri’s three languages—both hers and yet not hers—triangulate around Italy, a geographical center between India and America. For Lahiri, crossing the ocean was not merely an exercise in physical displacement. Writing in another language required the translation of her entire world, her entire life and her entire words. Her choice of Italian is thus a subversion of her binary in favor of a kind of trinary. Through In Altre Parole, she constructs a home for herself between languages.

The epigraph of In Altre Parole is a quote from Antoni Tabucch, an Italian writer who was deeply enamored with Portugal and the Portuguese language: “…I needed a different language: a language that was a place of affection and reflection.” Lahiri sets up the whole book as an analogy: just as we have complex relationships with different parts of identity, we have them with different languages. She self-diagnoses her fragmented perception of herself as linguistic in nature. “I’m a writer who doesn’t belong completely to any language.”

Other authors, especially from postcolonial contexts, have also played with the notion of language as representative of identity. Salman Rushdie, who writes in English, uses words in Hindi that cannot be translated or obscured by English, representing a truer version of one of the languages spoken in his native India. He and others have introduced other languages unapologetically into the colonial lexicon, which together make one that they can claim for themselves. They have also subverted the colonizer’s tongue: fragmenting sentences, omitting conjunctions, introducing jarring syntactical structures, refusing linear narratives.

Arundhati Roy, Indian writer and winner of the Man Booker Prize for The God of Small Things, plays with language almost irreverently. She transcribes phrases such as the Latin “Locus standi” to “Locusts Stand I,” uses rogue capital letters (“Love. Madness. Infinite Joy”), and creates neologisms like “steelshrill police whistle.” The epigraph of the novel is: “Never again will a single story be told as though it’s the only one.” Some stories cannot be told in only one language. For some, entirely new ones have to be invented.

Nina Bouraoui, a renowned French-Algerian author, is known for the fragmentation of her sentences that represent the fragmentation of the French language and her French identity. In her memoir Garcon manqué (Tomboy), many sentences are broken in odd places, creating their own rhythm and their own syntax. For example, she writes, “These ghosts of the Résidence. They return through my mother’s body. Through her chronic asthma. Through her loneliness. Through her fear.” Nina adopts different names throughout the memoir, including Brio, Ahmed, and Yasmina, all of which are different parts of her. Her alter ego, Amine, calls her Yesmina, stressing the y, the Arabic version of her name, while others call her Nina, a name “that could be Italian” and thus obscures her French-Algerian identity. She finds refuge in Italy, like Lahiri, where she is no longer French or Algerian: just herself. There, she is able to break the dichotomy of her existence, in a country which is also geographically between her two poles, France and Algeria.

In Lahiri’s past work, she has made frequent use of words in Hindi and Bengali: Pujo, Kabadi. The name of the protagonist in The Namesake, her first novel, is the impetus for his struggles with his identity. His name is Gogol, a Russian name, creating much confusion for other characters but most of all himself. Gogol’s struggle is inspired by Lahiri herself. Her name, Jhumpa, is in fact a nickname chosen for by her American kindergarten teacher, who found Nilanjana too difficult to pronounce. The literal changing of names in these cases represents a confusion of identities and languages.

So much of our identities are based on how others perceive us. Garcon manqué is a polyphony, constructed of many voices. Together they construct Nina through others’ eyes. “Are you Israeli? … I’ve seen hundreds like you… So you aren’t Arab?”

Languages are so steeped in certain identities that someone else’s claiming of them becomes a contentious act. Lahiri describes how she will never be fully accepted in Italy and never fully be able to learn the language because there is an impenetrable wall: her appearance. Her tone quivers with frustration as she describes the automatic acceptance of her husband in Italy, because of his white skin and his European name. In this way, his imperfect Italian is also considered flawless, even though he makes mistakes where she doesn’t, where she has devoted herself to reading the literature and learning the language while he speaks only because he has to.

She also has to provide an explanation every time she speaks in Italian. She hears implicitly, every time, “Don’t touch our language. It doesn’t belong to you.” She can’t just speak. Be. Belong. A similar wall exists in English. Even though she is an American author, so to speak, “No one anywhere assumes that I speak the languages that are a part of me.” Writing can break down that wall. “When I write, my appearance, my name, have nothing to do without it.  I become my words and my words become me.” By writing in Italian, Lahiri rejects the mutual claiming between a physical identity and a language. She ends In Altre Parole with the hope that “a piece of me can remain in Italy… though I hope that every book in the world belongs to everyone, or to no one, nowhere.”

A similar bareness is present in her writing, stripped of artifice, of crutches, and in her words, “without style.” It is composed of its bare constituent parts — subject, verb, object. It is like eating a dish without the flourishes, which allows the pure flavor and the love with which the dish was made to come through. She writes, “A second metaphor comes to mind…” Her writing draws attention to itself through its plainness and self-reflexivity, pointing to the most important choice of all, circling back to the literary and political implications of her decision to write in Italian. In the limits she finds limitlessness.

Writing creates her, and her life of many facets is like a word with infinite nuances. “I become my words and my words become me.” Through the mortification and the mistakes, a new voice emerges.

This self-imposed exile has changed Lahiri in English, the language which remains the base of the triangle that frames her self-portrait. At the same time, she questions the notion of the exile itself. “Those who don’t belong to any specific place can’t, in fact, return anywhere…I am exiled even from the definition of exile.”

Lahiri’s decision to write in Italian examines a paradox: language creates her but boxes her in. She writes in In Altre Parole, “Ever since I was a child, I’ve belonged only to my words. I don’t have a country, a specific culture. If I didn’t write, if I didn’t work with words, I wouldn’t feel that I’m present on earth.” At the same time, her previous works and words written in English can only reveal one aspect of her: the one connected to America and to English that obscures most everything else. Thus, in the bilingual edition, across the pages, Lahiri translates herself from Italian into English. The presence of the Italian gives the English—across the schism of the spine—depth, and vice versa. One’s limitations and the other’s possibilities create a more coherent whole: not just book, but also person. It is not within one language, but in the spaces between that Lahiri expresses herself. Between the countries, the words and the white pages that separate them. She gives me hope that I can find my way too.