Art in the East Side Railroad Tunnel 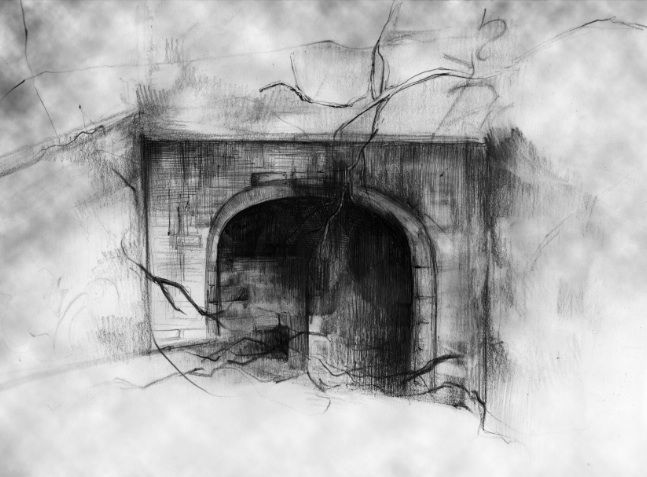 “Do you know why this closed in the first place?” someone asks me on a Friday night under a full moon at the entrance to the East Side Railroad Tunnel, next to Gano Street Park. “Some RISD kids threw a party. The cops thought it was a satanic ritual, but it was just some college kids.” On May 1, 1993, a group of students gathered—maybe to celebrate the ancient Gaelic festival Beltain, maybe just to throw a rager—in the mile-long tunnel, which was still completely open to the outdoors. They beat drums and set fire to a car. Police eventually broke up the gathering with tear gas. After the altercation, the city blocked off the entrance to the tunnel with a sheet of corrugated steel. Since then, someone has cut a narrow doorway out of the metal.

Almost twenty years later, on April 26, 2013, a collective calling itself “tunnel tribe” held another gathering called “art at east side,” the inaugural event of a series they plan to hold in and around the tunnel’s eastern entrance. Visitors crack jokes about pagan rituals. They beat drums and chant. Candles float in brackish water; people grasp branches to support themselves as they wade through the partially flooded tunnel, balancing on the train tracks that haven’t operated in decades. A few hundred feet inside, the most intrepid among us find the skeleton of the burned car. It feels like a pilgrimage to a holy site.

The group that organized the event evidently agrees. “There’s some sort of faith you have to have to walk into total darkness,” one of the organizers explains, “and that night, because there were so many of us, a lot of people felt like they weren’t scared and felt like they were ready to go in.”

But who are these organizers? you’re probably wondering. The members of tunnel tribe are, so far, two Brown students who began to devise an exhibit in the tunnel as a project for a class, The Art of Curating, “but it kind of spiraled out from there” into the hoped-for series, designed to bring in a larger community, they said. That may seem like an overly ambitious goal, and they spout big names; the conceptual artist Pablo Helguera, founder of the “School of Panamerican Unrest,” a “traveling think-tank” and performance art exhibit, is cited as the chief inspiration for the exhibit. But they also recognize a more immediate inspiration in the tunnel’s acoustics and their “otherworldy effect”—“kind of like a chapel,” one organizer said. They know that people are quick to dismiss them upon learning they are students, but this project is primarily about celebrating the space.

They also wanted to avoid associations with those who trashed the tunnel ten years earlier. The tunnel, they believed, “was tainted by...a lot of destruction.” They wanted to subvert that, to turn it into “a place for gathering and creation.” The inaugural event was supposed to happen several weeks ago, but was delayed due to rain, pushing it closer to the twenty-year anniversary.

The railroad tunnel, a source of fascination to those who live above it1, stretches a mile from Gano Street on the East Side to the other side of College Hill, near the intersection of Main Street and Thomas. It opened in 1908, bearing trains headed from Bristol to Fall River, MA. The dwindling use of freight trains in the 1950s contributed to its decline, and the last train passed through the tunnel in 1981, shortly after ownership transferred to the state.

Since then, graffiti artists have taken over, tagging the entryway and the nearby Seekonk River Bridge (commonly the “ghost bridge”) with elaborate designs. A zine called “UNDERNEATH PROVIDENCE Findings Thus Far” contains stories and images from the tunnel. One entry chronicles the writer’s first encounter with the area: “The ground under my feet cracked with broken glass, dried leaves and rusted spray cans. I was 16 and it was perfect.”

Many Providence residents remember when the tunnel was functional. One commenter remembers it from his time at Brown, from 1974-1978: “If you were in the library at the proper time, you could feel subterranean rumbling.” Even while the trains ran, teens would walk through on dares from friends. In the 1960s, “the whole area around the tunnel was a playground for us as kids,” another commenter remembers.

The city of Providence and Brown University discussed reopening the tunnel to a bus or tram as part of an East Side revitalization project in the early 2000s. But with the city’s budgetary prospects looking ever bleaker, the project has been discussed less and less. The western entrance to the tunnel is now blocked not only by a metal barrier but also by the parking lot of an apartment complex.

On the April night in 2013, the atmosphere is celebratory but calm. Early arrivals to the event are cautious, stumbling down into the ravine, where the tunnel begins, aided by flashlights or the moon. At the bottom they find a swamp, with sheets of metal, plastic, and wood laid across the muck to allow passage. Floating in the water, amid other debris, are ten-year-old computers. The art on display includes one faint projector, powered by candlelight, far inside and up against the tunnel wall. At one point, a duo on bass drum and guitar starts to play outside, with no introduction. Most of the audience—mostly college kids, but including people in their late 20s at least—is facing the opposite direction, staring into a bonfire.

The members of tunnel tribe maintain their anonymity for several reasons. “There’s no ownership when it comes to a public site,” they explain. They are more like curators—they invited artists to make art in and around the tunnel, set up the space, and wrote the curatorial statement available on tunnel tribe’s wordpress. “We’re just facilitating a vision that we had,” they said.

But they’re not totally ready to give up the reigns yet—asked if they would rather be involved in curating future projects, they said, “We want people to feel like they can reach out to us, and since we’ve done something [in the tunnel], to work with them; we have that experience.” Then again, one organizer said, “I’d love to attend someone else’s event there.” There’s a sense of ambivalence in wanting to curate a space and document what goes on while letting it grow organically, but there’s no doubt that this is a more democratic way of experiencing art than what you’d encounter in a conventional museum or gallery. Visitors are left to their own devices, to make more art or music or just to observe. There are no instructions.

It’s important to remember that these aren’t the first people to create art in this space, nor do they claim to be. A small shack sits close to the tunnel opening, built by other artists in January. A book by the dwelling’s entrance offers a message, a fitting epigraph to tunnel tribe’s event: “We give and take the places we visit.” The hope now is that others will do the same.

EMMA WOHL B’14 is sixteen and it was perfect.

1. The Independent, in fact, opened a story in 2008 with the lede, “Every few years, a piece emerges in the Independent, BSR, or the Providence Journal with the message ‘Did you know there is a mile long, underground railway tunnel underneath College Hill?’”