Public Space is the Place 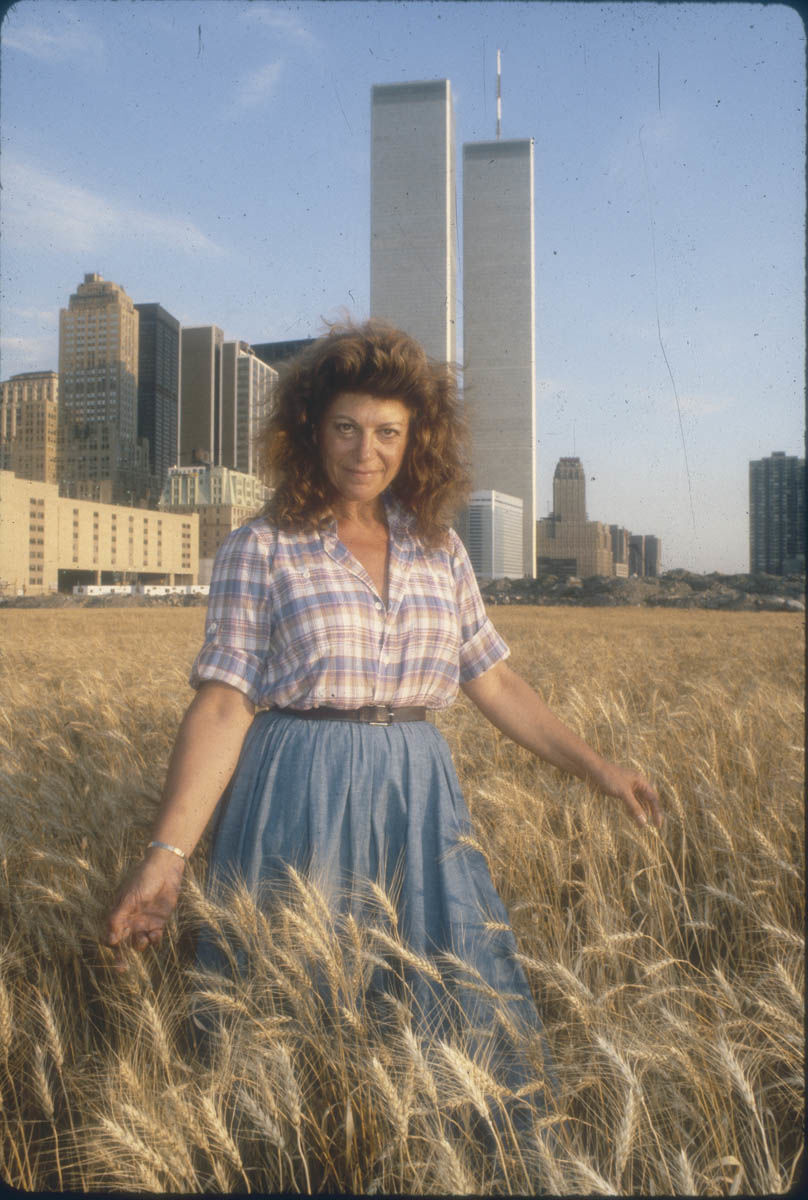 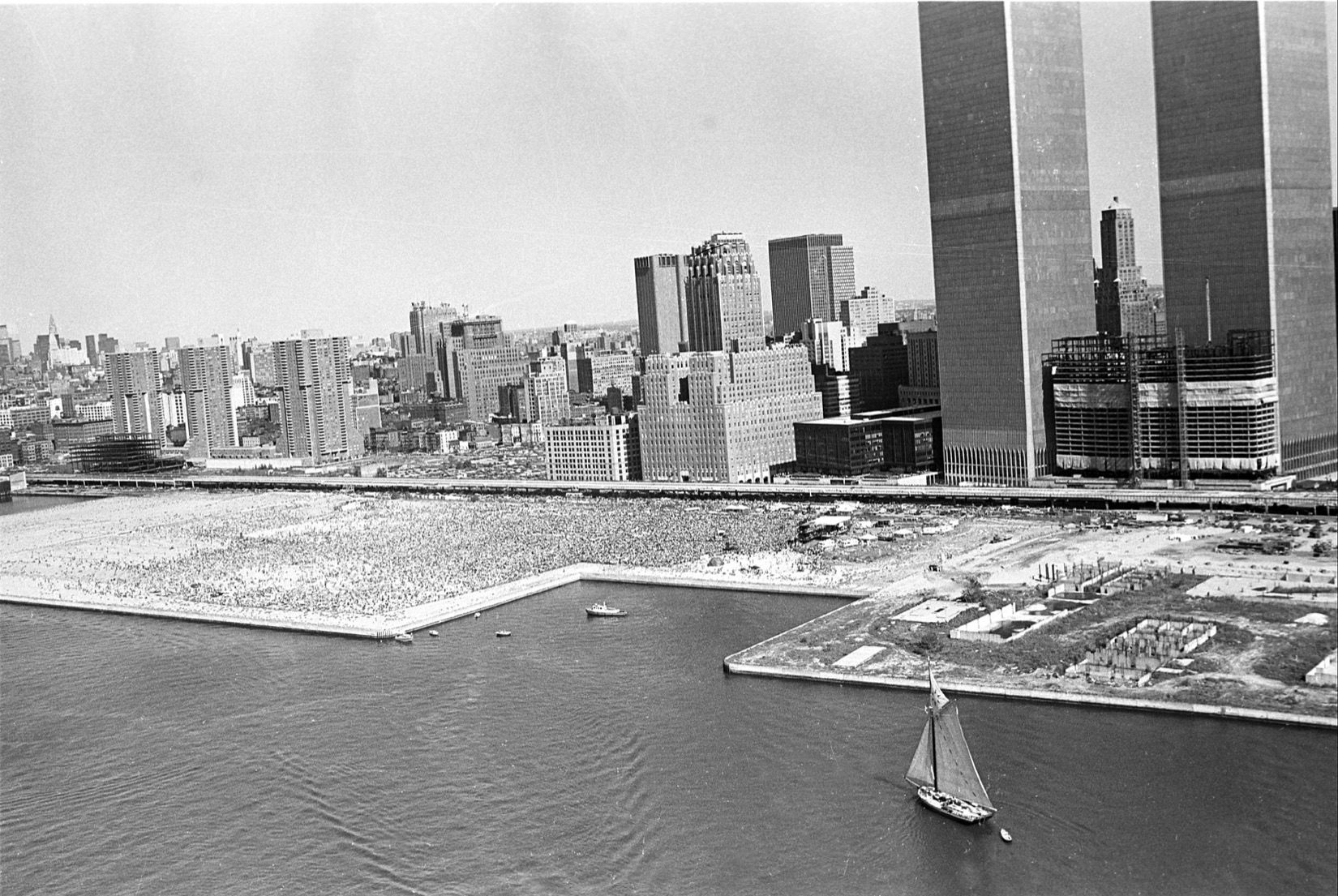 Before the World Financial Center, the glass skyscrapers, the open-air cafes, the high-end boutiques, the promenade, the luxury high rises and corporate offices, the disaster that emptied them in September 2001, Battery Park City—a 92 acre planned community with all of this and more, that juts westward out of the base of Manhattan—did not exist. The artificially installed land mass, which today serves as a playground for Manhattan’s financial elite and a postcard for New York’s revitalized downtown, was once a few dilapidated shipping piers—victims of the container industry which drove sea-traffic to the modernized Port Elizabeth, New Jersey. In 1963, with support from Governor Nelson Rockefeller, brother David Rockefeller, then president of Chase Manhattan Bank, and the Downtown Lower Manhattan Association (DLMA), championed a plan to cement downtown as the financial hub and created a residential neighborhood to support it. In 1966, construction began on what became the first in a series of largescale building projects that attempt to redevelop and revitalize lower Manhattan: Minoru Yamasaki’s World Trade Center. The debris collected from constructing World Trade Center was deposited along the Hudson River, creating a valuable stretch of vacant, city-owned territory on which residences and offices were later built. In 1968, the city tasked the newly established Battery Park City Authority (BPCA) with the responsibility of financing and developing the newly landfilled 92-acre site. Conversations between the city and the BPCA were held regarding using the Battery Park landfill for subsidized housing, but these plans quickly dissolved. Just as the Battery Park City landfill was completed in 1976, New York approached bankruptcy; NY Daily News printed boldly, “FORD TO CITY: DROP DEAD,” and federal and state housing subsidy programs vaporized. The Battery was reduced to a useless plot of sand.

But New York’s failed development project became fertile ground for early experiments in public and site-specific artworks. Between 1978 and 1985, Creative Time, a non-profit arts organization based in New York, sponsored a series of sculptures, performance pieces and earth-works in a series known today as “Art on the Beach.”

In May 1982, Hungarian artist Agnes Denes, with a handful of volunteers and assistants, cleared four acres of trash from the Battery Park City landfill, spread 225 truckloads of topsoil, dug 285 furrows by hand, and planted nearly two acres of golden wheat. The installation, entitled Wheatfield - A Confrontation and supported by the Publuc Art Fund, was tenderly cared for over the six month growing season: an irrigation system was installed, volunteers cleared away wheat smut, weeds, fertilized, and treated the crops with protectants from mildew fungus. The installation was harvested on August 16 and yielded over 1000 pounds of healthy, golden wheat. For Denes, her “decision to plant a wheatfield in Manhattan, instead of designing just another public sculpture, grew out of a long-standing concern and need to call attention to our misplaced priorities and deteriorating human values.” Wheatfield - A Confrontation, planted next to the towering epicenter of commerce—the World Trade Center—highlighted the swallowing gap of wealth between those who rely on the production and sustenance of staples such as wheat and the high-speed trading economy a few blocks south on Wall Street. But most of all, Wheatfield complicated the foundational idea on which Battery Park City was supposedly built. The landfill’s $4.5 billion dollar value was based on an economic potential that spectacularly failed in 1976 when potential was no longer seen as a viable economic model amidst the city’s bloated budget and crippling debt. Wheatfield was in this way everything the proposed Battery Park City was not: a physical, naturally grown, living organism, fully realized by those who planted its seeds.

Between 1987 and 1990 the harvested wheat traveled the world to 28 cities in an exhibition called “The International Art Show for the End of World Hunger,” organized by the Minnesota Museum of Art. The harvested grain was distributed and replanted by volunteers around the globe, thereby completing the ecological cycle. 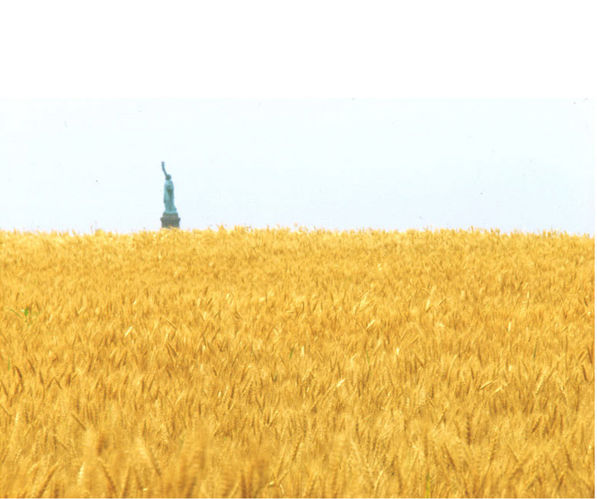 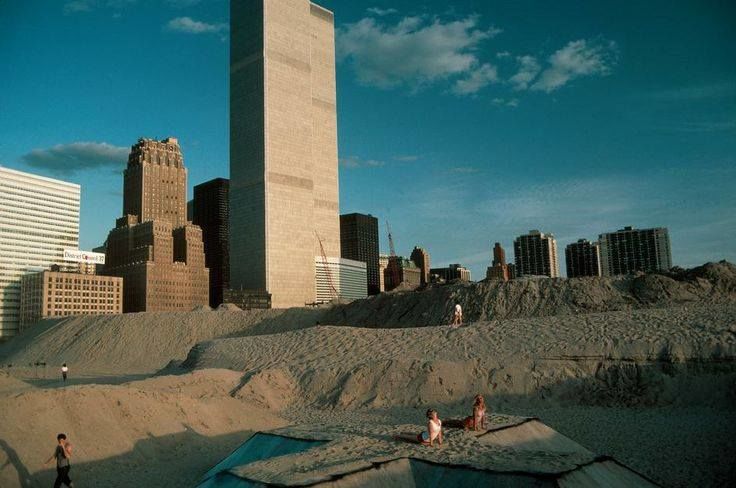 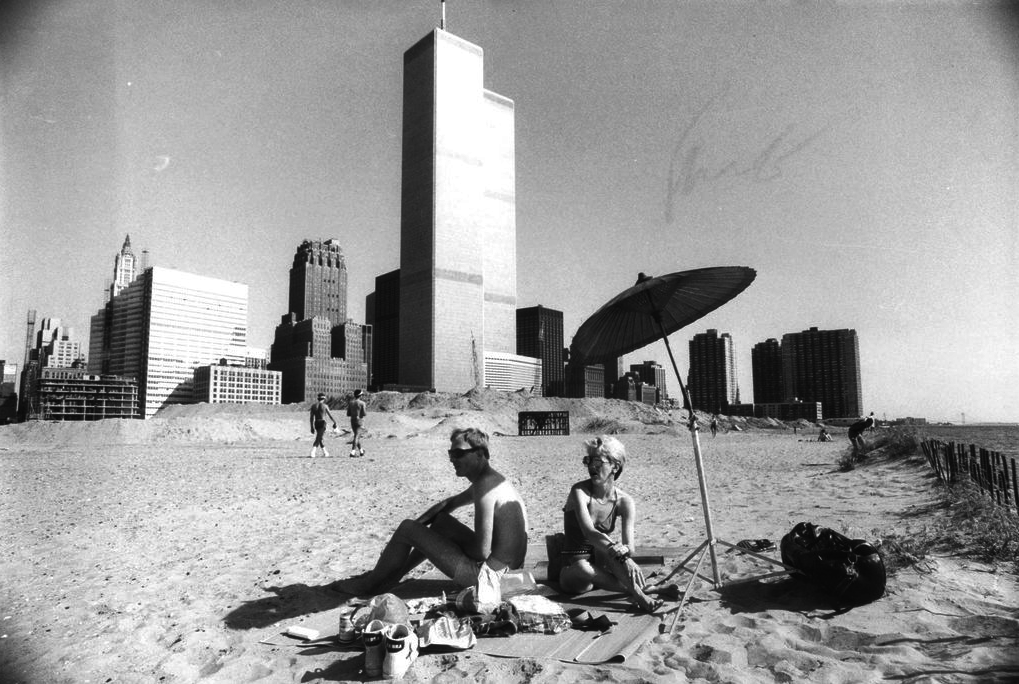 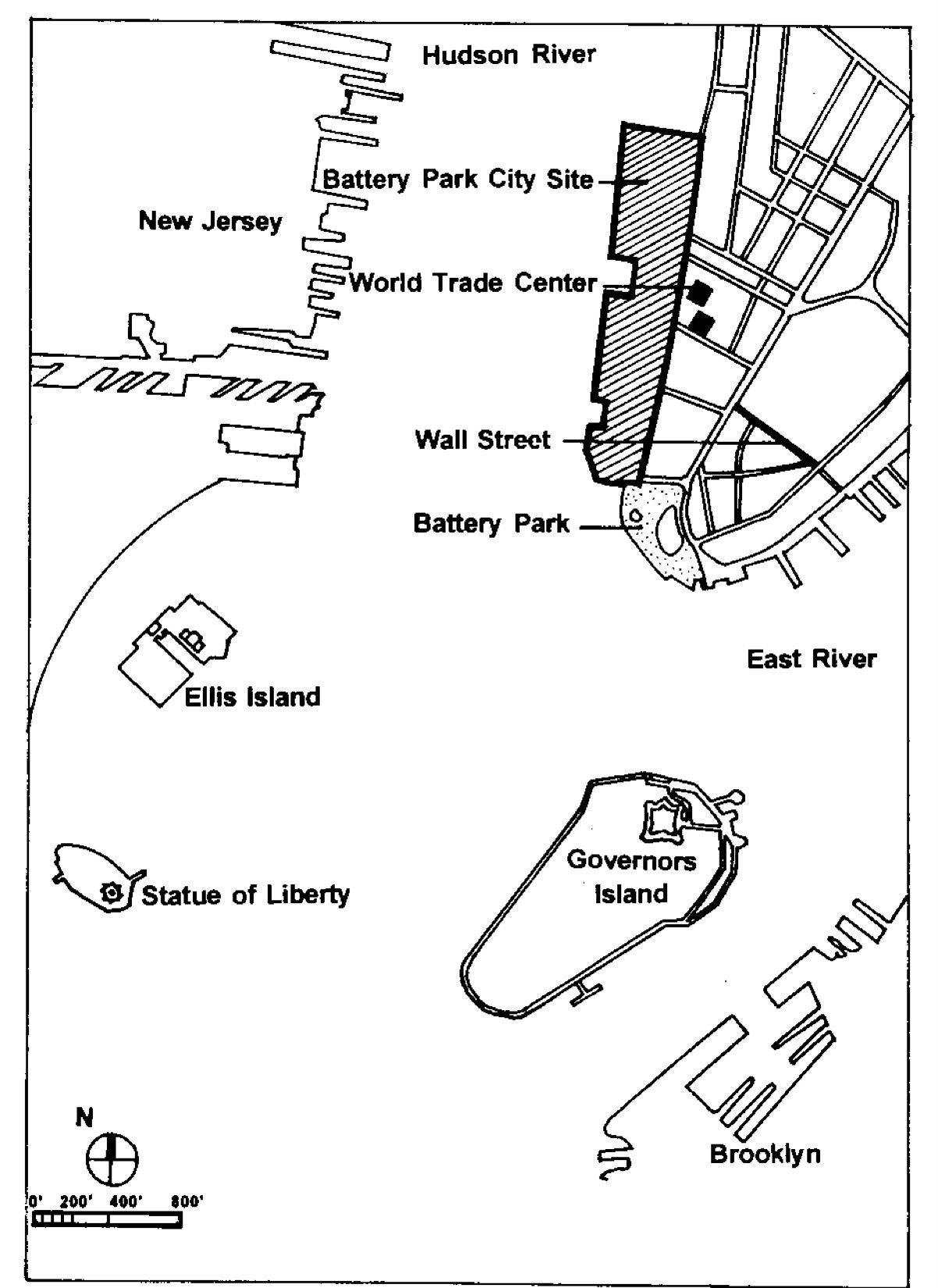 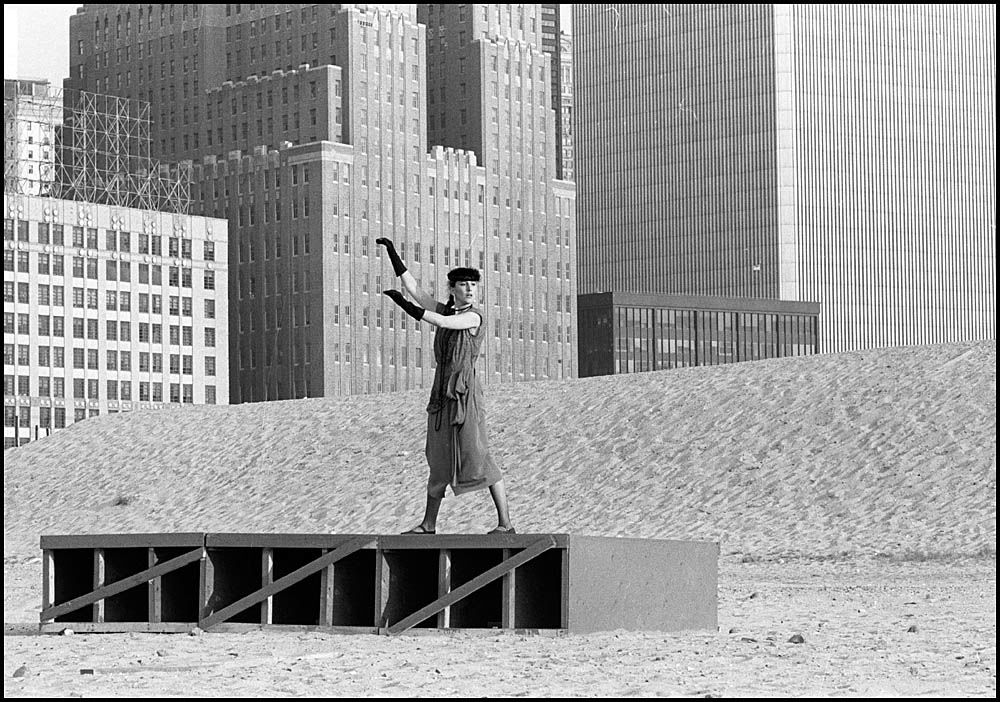 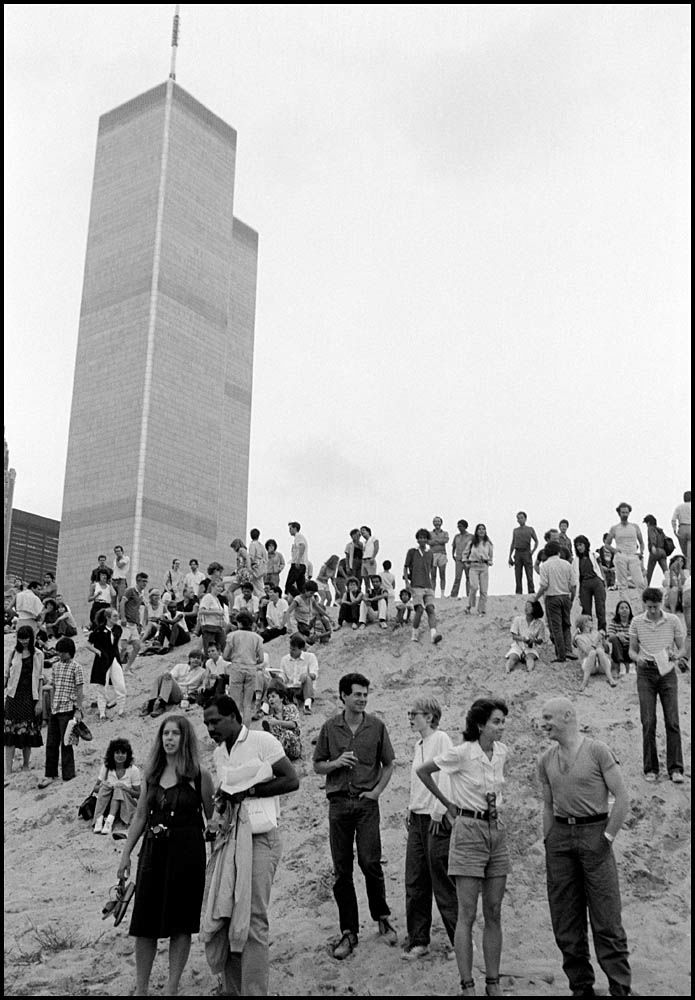 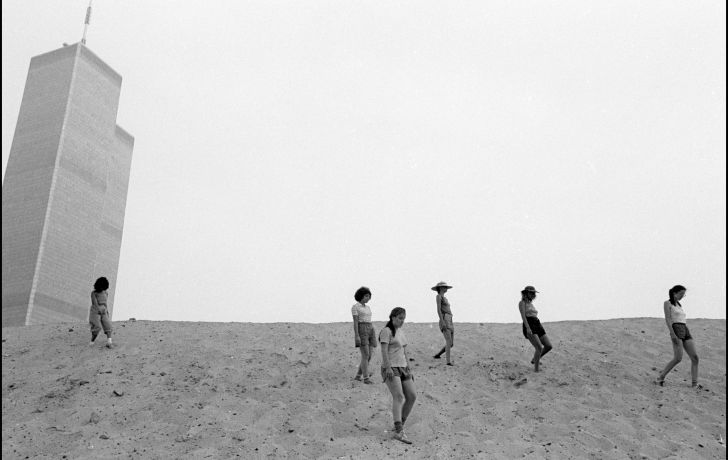 Subsidized housing would never be realized in Battery Park City. The former head of New York state’s Urban Development Corporation (UDC), Richard Kahan, took over the BPCA in 1979 and immediately ceded ownership to the UDC for a dollar—freeing the landfill from the city’s regulations regarding mixed income housing. Kahan’s new development plan was less a residential housing block than it was an extension of burgeoning lower Manhattan. A review done by the BPCA in the early 80s stated: “among the internal reasons for [Battery Park City]’s failure were the master plan’s ‘excessively rigid large-scale development format,’ which had prevented gradual development of the site; and unduly complicated controls over every detail of the project.” Kahan imagined Battery Park City, like most of New York, as a grid, with matching (but updated) architectural styles, and ample space for commercial and residential use. In 1986, the BPCA restructured their financing agreement with the city such that all Battery Park City residences were authorized to go at market value. Affordable housing was invested in Harlem and the Bronx, and a portion of new BPCA revenue streams were directed back into the city.

Battery Park City faced more hiccups along its route to completion. A real estate slump in the early 90s stalled development and it wasn’t until 1995 when private development kicked up and the luxury residences began to fill. In 1999, with Battery Park City at full throttle, the BPCA posted on its website a timeline entry that commemorated the moment Battery Park City cleared the way to establish itself: “1986: New York Legislature passed, and Governor signed, legislation which allowed Battery Park City’s excess revenue to be used for lowand moderate-income housing in the Bronx and Harlem.” 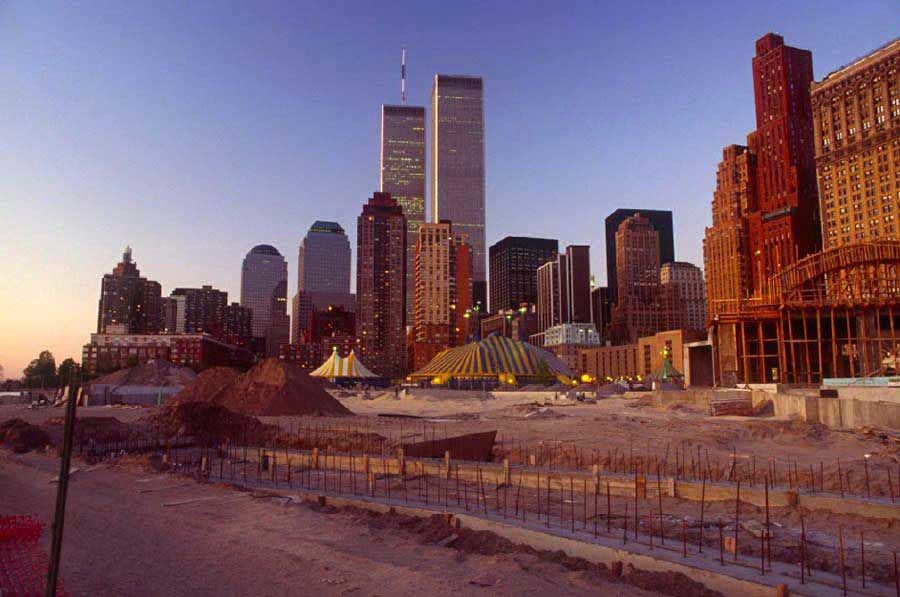 On August 28, 1985, Sun Ra and his Omniverse Arkestra presented Omniverse II for a crowd of hundreds as the final installation of “Art on the Beach.” The band played in front of David Hammon’s Delta Spirit House—a shack constructed from materials scavenged from the streets of New York—which would soon be destroyed. Bulldozers had begun clearing the landfill for construction. A chain linked fence was installed at the site’s edge, cutting off access to the Hudson River. Art critic Patricia Phillips lamented in Artforum: “The encroachment of Battery Park City Authority development was imminent.” As the sun set, Sun Ra repeatedly chanted “Space is the place,” announcing to the audience that he was from the moon. In the final number, Ra and his Arkestra began their procession, marching single file through the crowd and eventually returning to the stage. Blasting brass and percussion, they exited the landfill on foot, still playing, with their audience behind them, fingers pointed to the sky.

The landfill Ra and his cohorts left remains public today—in a way. Over four million people visit Battery Park City yearly, on lunch break, skipping through the playgrounds, lounging under the sun in Rockefeller park, swallowing the mouth of the Atlantic. That in merely three decades the BPCA turned a derelict shipping port into a tourist magnet and smashing financial hit is just part of the reason critics have heralded the megaproject’s success since its completion. “Battery Park City was an economic success,” writes political theorist Susan Fainstein. “Moreso, thanks to its location on landfill next to the financial district, it did not displace anyone either economically or spatially.”

There are no signs to tell visitors and residents of lower Manhattan when they are standing on former landfill and when they are not; when they are trekking across the land-birth of the World Trade Center—land that was once a social experiment for both artists and developers alike (and in some ways still is)—or land that was simply always there. If there were, they might clarify what’s been made private in making Battery Park City ‘public.’ We might shift in our seats a little, knowing that the stitches that surgically attached the artificial island of debris are not as seamless as they appear to be.

WILL TAVLIN B’17 is filled with land.