There are four parking lots within a two block radius, but parking on the empty cement plaza of Cathedral Square is free. Save for a few cars and a skateboarder sliding down the fountain’s dry slopes, the Square is empty. The Church of Saints Peter and Paul is a towering reminder of the abandoned plaza’s grander origins.

For the first few decades of the 19th century, Providence’s 1,600-person Catholic population—most of whom were Irish immigrant railroad and factory workers—had conducted religious services in the Old Town House or in Mechanic’s Hall on Market Square. In 1837, the first permanent Roman Catholic church in Providence held its inaugural mass, led by pastor John Corry in the still unfinished Church of Saints Peter and Paul. 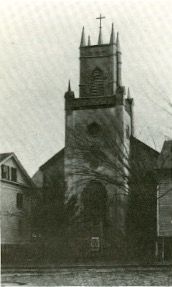 By 1872, a massive influx of Irish immigrants increased the Catholic population of Providence to 200,000, and the small church building could no longer accommodate the congregants. Bishop Hendricken ordered the destruction of the old church and commissioned the design of a new, larger cathedral from Patrick Keely. The cathedral served as a central cross-section of the shops and businesses along Westminster, Cranston, and Weybosset streets. 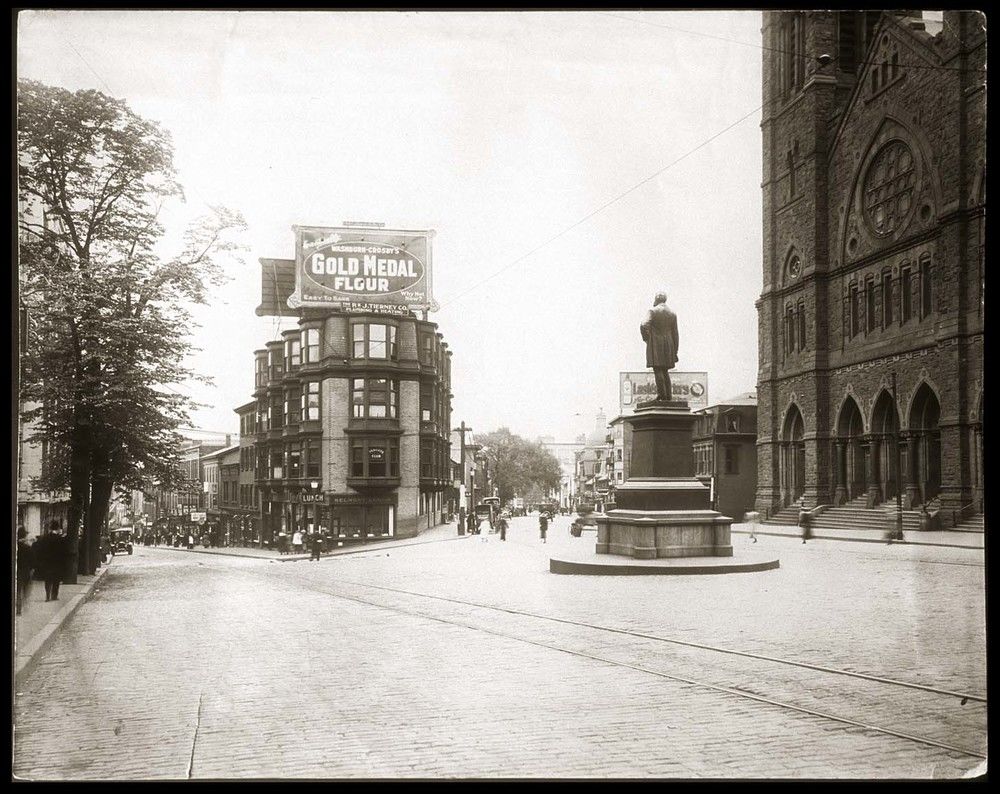 Cathedral Square continued to thrive as the major intersection of the Weybosset Hill neighborhood through the early 1940s. However, the decline of the textile industry left the city without the necessary funds to restore the crumbling facades of the 18th and 19th century buildings of Weybosset Hill. After World War II, the popularity of the automobile led to the development of a vast urban sprawl that spread into the outer reaches of the Providence municipality and its suburbs. From 1940 to 1950, Providence’s population declined 2.3 percent; from 1950 to 1960 the loss was much heavier—17 percent, the highest rate of attrition in the country at that time. Business moved out of downtown as shopping centers emerged on the edges of the city. By 1960, the Providence Redevelopment Agency (PRA) had—using federal funds made available through the Federal Housing Act of 1947—surveyed the area around Cathedral Square, ultimately identifying it as a “deteriorated blighted area.”

In 1961, the PRA released a ten-year Providence Master Plan, which called for a massive overhaul of the “old and worn out” Downtown Providence. The plan exclaimed: “What will the character of that future world be if the cities of today’s America remain unchanged? The central city of today is a blighted and obsolescent nucleus of ever-expanding suburban rings that house the city’s self-exiled upper-and middle-income families…” This language echoed the many apocalyptic urban analyses that emerged in the post-war period: books and articles with titles such as “The Exploding Metropolis,” “The Unloved City,” “Can Downtown Survive,” and “What’s Wrong with Our Community” heralded a nationwide urban crisis.

In its 1963 report, the PRA made an optimistic promise about the Plan’s potential: “By all indications, the ‘new face of Providence’… will become a reality much in evidence during 1964 and succeeding years.” Indeed, the city moved fast: by the end of the year the Urban Renewal Association (URA) had authorized the PRA to undertake a survey to determine the relocation needs of the approximately 300 businesses that were scheduled for project acquisition. At the same time, the URA was busy relocating the highway to the city’s interior to make downtown more accessible to suburbanites.

To turn the aspirations of the Master Plan into a reality, the city of Providence called upon the world-renowned Chinese-American architect I.M. Pei—who would later go on to design such acclaimed works as the National Gallery East Building in Washington D.C. and the glass pyramid addition to The Louvre Museum in Paris. Central to I.M. Pei’s plan (released in 1962) was the revitalization of Cathedral Square. Inspired by European plaza models, Pei intended to replace small, old city blocks with large scale development centered around pedestrian passages— “superblocks.” 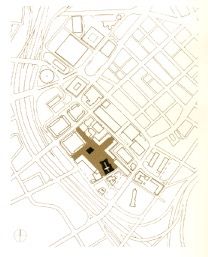 According to Pei’s plan:

Today, that space is a funnel through which pours the traffic of five streets. In the plan, the rerouting of automobiles to other local streets permits the formation of a pedestrian oasis, attractively paved and embellished with sculptures, a fountain, tree, and special lighting standards… Thus Cathedral Square will become the heart of the Weybosset Community; the crossing point of Westminster Mall and Jackson walkway, a lively meeting place of community activities. A well-ordered center, it will serve the multiple purposes of urban life in the proven manner of so many similar urban spaces and church squares of the cities of Europe. 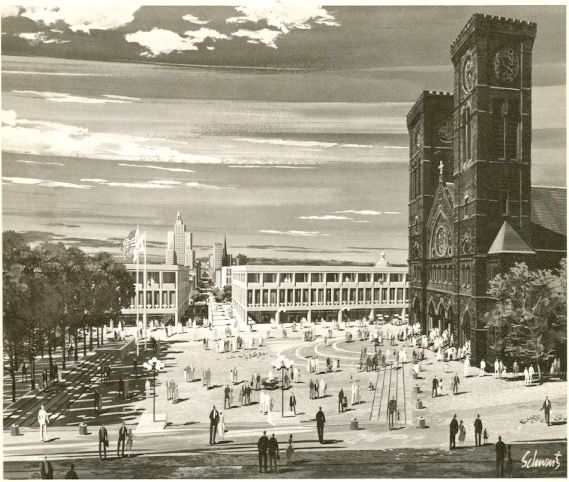 The plan seemed to echo the earlier modernism of architects such as Le Corbusier, who wrote in 1929: “WE MUST BUILD ON A CLEAR SITE!... Statistics show us that business is conducted in the centre. This means that wide avenues must be driven through the centres of our towns. Therefore the existing centres must come down. To save itself, every great city must rebuild its centre.” In the 1950s and 60s, urban renewal meant the destruction of the past to make way for a future that arrived slowly, if it arrived at all. In urbanist Peter Hall’s estimation, in just its first few years the national urban renewal program had destroyed four times as many units as had been built. “Since the average scheme took twelve years to complete,” Hall added. “Land was left vacant.”

The Weybosset Hill project was launched officially in May 1964 and Cathedral Square was dedicated in 1974. A year later, an Evening Bulletin article lamented that Pei’s “most exciting design opportunity” was desolate. Thomas E. Deller, Providence’s planning and development director, called Cathedral Sqaure “a failure,” while David Brussat, design critic of the Providence Journal, called it a “dead zone.” A lifeless collection of 800 apartments surrounded the empty, concrete square. The lights in the square had bulbs in need of replacing, the fountain didn’t work. Visual connections were broken by buildings and by significant grade differences between Empire Street, Greene Street, and the Square. The open space of the square was often used by the residents as a free parking lot. 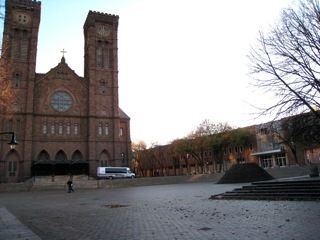 Vacant lots scattered the surrounding area, where houses were demolished to make room for never-completed projects. Rather than steer drivers towards the city center as intended, the highway cut deep into the urban fabric, resulting in circuitous pedestrian and vehicular routes. Westminster Street traffic was diverted away from Cathedral Square. The Square appears very much the same today.

Pei’s modernizing influence extended beyond Providence: 50 miles north, Pei was responsible for the plans for the Boston Government Center complex and for the Christian Science church complex—described by Boston-area architectural historian Maureen Meister as “two wastelands.” A year later, Pei concocted a comprehensive redevelopment plan for downtown Oklahoma City. The plan was governed by many of the same ideologies of urban renewal that shaped the 1961 Providence Master Plan, calling for the demolition of hundreds of historic downtown structures to make room for “superblocks,” parking lots, office buildings and retail developments, in addition to public projects such as the Myriad Convention Center and Botanical Gardens. An advertisement video for the redesign plan released by the Oklahoma City government in 1964, titled “A Tale of Two Cities,” offers a frightening warning:

The disease called blight—deadly mold—has settled on our downtown and is killing it. The symptoms are obsolete structures, congested traffic, too little parking, worn-out hotels and low-grade businesses. Since few people come here and business costs are up, many merchants have thrown up their hands in disgust and left… Our city’s vitality relies on eliminating the malignant tumor that now exists in downtown before it spreads. This tumor can be removed through a dramatic renewal plan that is designed to guarantee downtown’s rebirth.

The demolition was carried out swiftly, but few of the other plan’s goals were achieved: dwindling support for urban renewal under the Nixon administration forced redevelopment activity to a halt by 1980. The plan met with so much resistance from the community, who bemoaned the loss of the historic structures, that it would be another two decades before Oklahoma City’s leadership dared commission any other large-scale urban planning for downtown.

The defects of these plans were not merely aesthetic, but had profound impacts on the social and economic fabric of these cities. A 1964 study of Providence identified 350 firms displaced by renewal or highway projects between 1954 and 1959. The study found that one-third of the companies had gone out of business; of those that survived, six of ten reported a decline in income; only one in ten showed an increase. One-fifth of the business owners became unemployed, one-fifth retired; the rest found work but 90 percent earned less income. Despite clearly disastrous results, urban planners continued to trust in a set of one-size-fits-all faux-scientific rules of urban renewal, which tended to blame cities’ problems on a narrow set of specific design flaws that were each approached as if in a vacuum. In addition to a concern about deteriorating and obsolete structures, these rules were governed by an inordinate fear of traffic. As Jane Jacobs wrote in her 1961 book The Death and Life of Great American Cities:

Automobiles are often conveniently tagged as the villains responsible for the ills of cities… But the destructive effects of automobiles are much less a cause than a symptom of our incompetence at city building. Of course planners, including the highwaymen with fabulous sums of money and enormous powers at their disposal are at a loss to make automobiles and cities compatible with one another. They do not know what to do with automobiles in cities because they do not now how to plan for workable and vital cities anyhow—with or without automobiles.

Luckily, though, these plans were also defined by overly zealous ambition and, ultimately, infeasibility. The Cathedral Square redesign is one of the only parts of the Pei plan to come to fruition. Visiting Cathedral Square 1994, the architect Andres Duany called it “a disgrace,” but advised Providence planners and officials to be grateful that insufficient funding had saved the city from the fate of nearby Hartford and New Haven—cities that had been “devastated because they did exactly as their planners advised in the 1960’s and 1970’s.”

In 2007, the City of Providence Department of Planning and Development released the Cathedral Square Feasibility Study. After addressing the toll Pei’s plan took on the square, the report suggests a range of projects to restore the Square to its former vibrancy. The plan is an effort to turn back time, to reconstruct the Square that existed before urban renewal: restoring the Cathedral’s dominance as a neighborhood landmark, re-extending Westminster street to transect the large open plaza, rebuilding shops and cafes along the plaza. All of this comes, of course, at a cost: the entire project budget is estimated between $6.6 to $10.8 million, and the funds have not yet been secured. Pei’s enthusiasm for destruction and its promise of a better future is entirely absent from this plan: the projected $2 million cost of demolishing the Bishop McVinney Auditorium, a dysfunctional 1970s structure interfering with any potential reconstruction of the former street pattern, is anticipated only as a nuisance.

SOPHIE KASAKOVE B’17.5 is also inordinately afraid of traffic. The images are not her own. 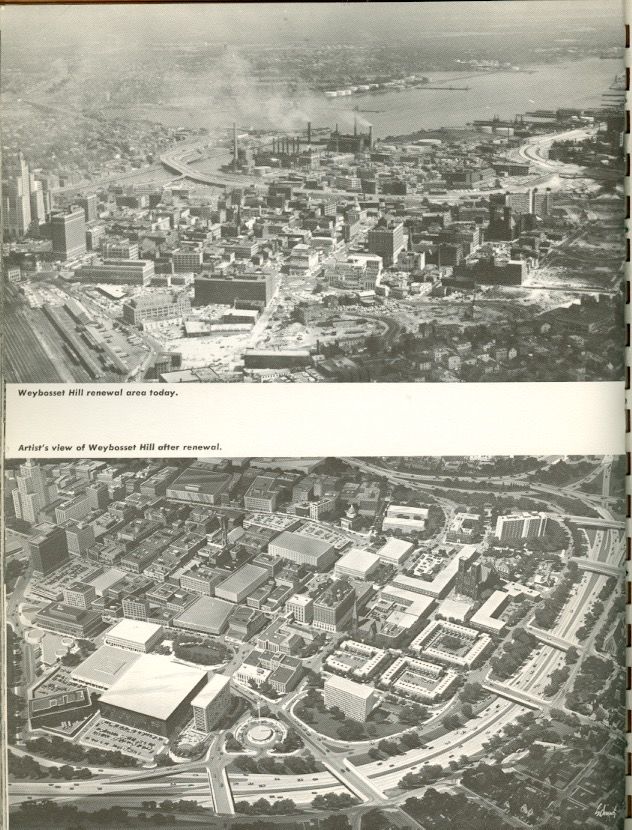