Black Is the Color 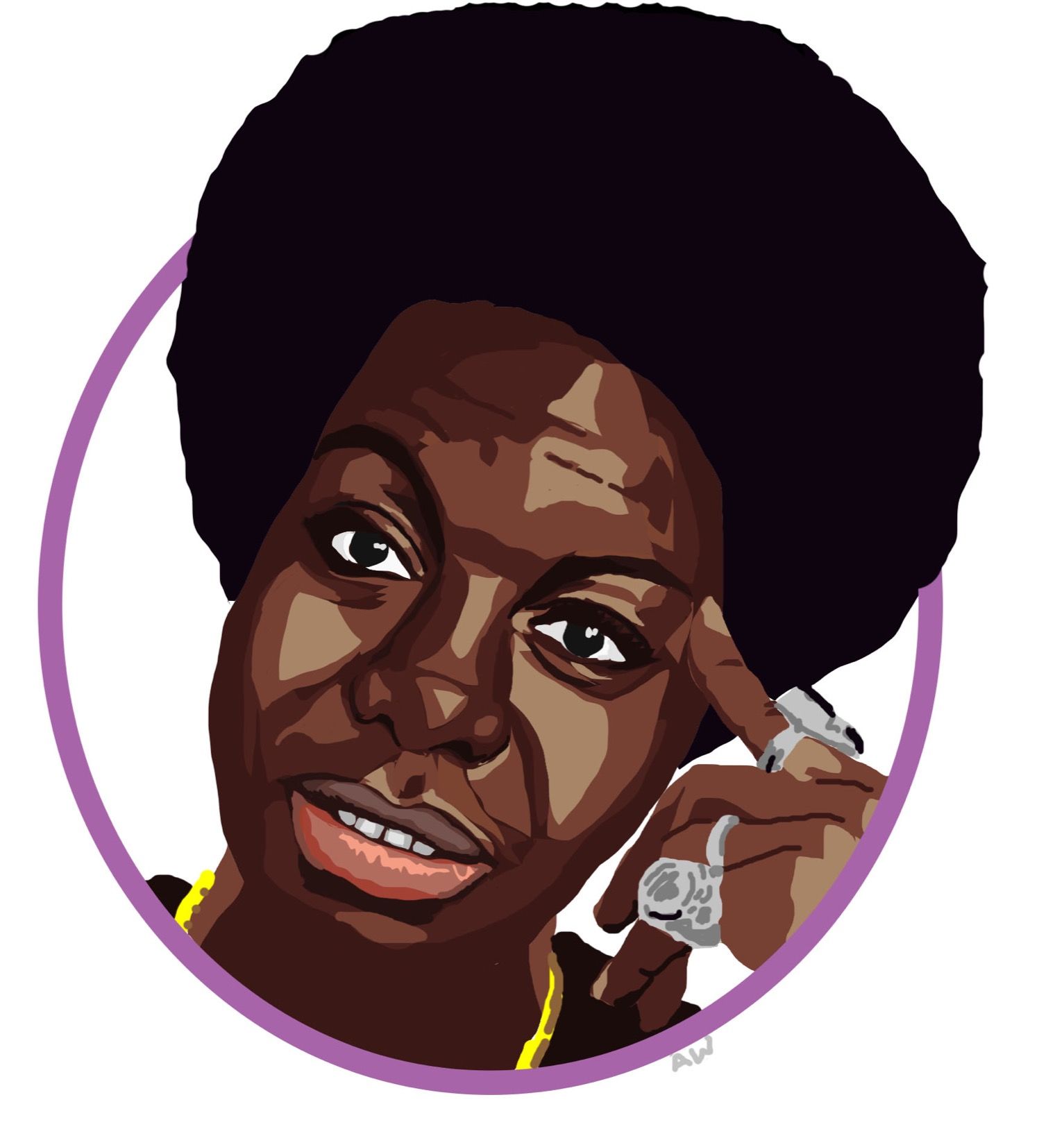 Watch the trailer for the upcoming biopic Nina, out April 22, and you might think Zoe Saldana inhabits the role well. There’s Nina, “a complicated lady” in the words of one of the film’s characters, throwing a champagne bottle at her manager; Nina brandishing a handgun; Nina with the dismissive laughter; scowling Nina of the headdress and theatrically large earrings who stares her astonished audience down as if she were a furious African queen and they her disrespectful subjects. She was notoriously angry, volatile as a volcano, after all. Saldana’s clear-toned singing doesn’t quite match Nina Simone’s distinctively brassy, baritonal voice, but it goes deep enough to sound like a somewhat faithful representation, and she gets Simone’s dignified, righteously-condescending manner of speech about right. One problem, though: Saldana herself looks nothing like the legendary singer. The actress conceals her wavy hair and caramel complexion with layer upon layer of dark-brown makeup, topped off by an Afro-textured wig and complimented by a prosthetic nose.

Biopics are a unique film genre in that they operate somewhere between documentary and drama, a nebulous, frustrating cinematic space where reality and fiction are nearly interchangeable. On one hand, there exists a need to generate a 90-minute Hollywood narrative arc from the raw materials of history; Nina will, for example, feature a love affair that, according to Simone’s daughter, never happened. The drama must necessarily, however, have a strong basis in fact, or the movie merely devolves into an elaborate scam run on the unwitting spectator by cast and crew. It is rare to find an actor who can so completely morph into another notable figure that it seems no such change ever took place, and it pleases our need for watching films that feel sincere, whether they be fiction, half-fiction, or an earnest attempt to display things as they happened. Watching Jamie Foxx in Ray more than a decade ago gave me a deep satisfaction that I understand only now—he looked, sounded, and moved just like I imagined Ray Charles from the records and pictures, which made an otherwise mediocre movie a thrill to watch.

We go into most films anticipating surprise, avoiding spoilers even if it means swearing off all social media in the days before a trip to the theater, as some of my friends did before seeing Star Wars: The Force Awakens. But the biographical film appeals to different impulses; we watch biopics to be told, with fabulous shock and intrigue, what we already know. In most cases, that would be the familiar narrative of the acclaimed and tortured genius—Nina Simone, Ray Charles, Alan Turing, John Forbes Nash, Steve Jobs, and so forth. Any deviation from ‘real life’ provokes anger, even over miniscule contrivances that get tacked on to these pop histories. Nina has accumulated detractors, including the late singer’s estate, for these very reasons.

The outrage, however, is about much more than that. It is about blackface, colorism, and diversity. Nina, which has been stalled for years, probably couldn’t be released at a more fortuitous time for discussing these issues. It comes right after fierce criticism of Hollywood’s unspoken racism at this year’s Oscars, amid Black Lives Matter’s eponymous declaration of self-worth, and not so far behind Rachel Dolezal’s humbling exposure as a Caucasian-playing-Black. Dolezal’s appropriation game was offensive for obvious reasons, but it also posited something that registers a more questionable discomfort: that the essentialist racial identities Americans hold tight are easily modifiable with a change in hairstyle, who we call family, or appointment to lead a local NAACP chapter. She did it for years with no one noticing, even though her skin tone had remained almost the same. “Dolezal’s unwavering certainty that she was black was a measure of how seriously she believed in integration,” Wesley Morris wrote provocatively in the New York Times Magazine last year, “It was as if she had arrived in a future that hadn’t yet caught up to her.” Saldana finds herself in a position not unlike Dolezal’s.

Nina’s directors (almost all white) likely had reasons for casting Saldana that seemed innocent. As big-budget filmmakers do, they probably thought of the film’s economic viability when they cast Saldana and her noted co-star David Oyelowo, who played Martin Luther King, Jr. in last year’s Selma. Saldana in particular has become a more profitable human resource than most actresses of color dream of. She starred in 2014’s Guardians of the Galaxy, that year’s highest-grossing superhero film, not to mention 2009’s Avatar, the highest-grossing film of all time. Those were films where Saldana’s ambiguous racial identity—she identifies as Black, Latina, and “colorless,” all at once—gave her a space in which to portray, respectively, a green alien warrior and a blue alien warrior. What’s any different, the crew may have asked themselves, if she wears brown makeup this time around? And is there such a thing a Black person doing blackface anyway? They may have thought they were doing the popularly-misunderstood Simone a favor by casting a high-profile actress to tell her story. Then again, that could be a projection of high social consciousness onto people who probably did not consider it anyway, and may have had no pressing, personal need to do so.

Yet notable Black actors, such as Queen Latifah, have also defended Saldana’s casting. BET co-founder Robert L. Johnson, whose media company is distributing the biopic, denounced the film’s critics: “You hear people saying that a light-skinned woman can’t play a dark-skinned woman when they’re both clearly of African descent. To say ... I’ve gotta hold a brown paper bag up to the actresses and say, ‘Oh sorry, you can’t play her.’ Who’s to decide when you’re black enough?” Johnson’s point can seem scoff-worthy to anyone who knows Nina Simone’s story. In Liz Garbus’ excellent documentary What Happened, Miss Simone?, Lisa Simone Kelly, the singer’s daughter, mentions that her mother had been told that “her nose was too big, her lips were too full, her skin was too dark” during childhood. Her entire career then proceeded with that in mind, as Simone turned from classically-trained pianist to a Black Panther Party-inspired revolutionary singer who once told Martin Luther King, “I am not nonviolent.” So much of her music was an unapologetic repudiation of America’s crimes against Black people; the mostly white crowd’s discomfort must have been almost tangible when she performed “Mississippi Goddam” at Carnegie Hall in 1964, protesting Medgar Evers’ assasination and the 16th Street Baptist Church bombing in Birmingham much more boldly than most Black musicians of the time. It is a grand and tragic irony, as Ta-Nehisi Coates has already written, that the woman cast as Simone embodies the vision of Black womanhood that Simone railed against her entire life. “A young Nina Simone would have a hard time being cast in her own biopic,” Coates noted, because when filmmakers do cast the rare Black actress, she tends to be like Halle Berry, or like Kerry Washington. Black, yes, but palatably so, with the light skin and narrow features Simone suffered for not having. That the filmmakers merely covered those features up with makeup and prosthetics is no consolation.

Johnson has a point, though. The criticism that Nina has attracted is entirely warranted, given the prevalence of colorism against dark-skinned Black women in our national media. It rests, however, on the assumption that there is a such thing as racial authenticity and that it is easily performed by hair, skin color, and face shape, which is something we all know to be problematic; that says to Saldana that she isn’t Black enough, despite her proud self-identification with her African ancestry. This is not to say that reverse colorism, or reverse racism, are real systems at work in society. They aren’t. But who can decide whether a portrayal is racially authentic, or when costuming is more like blackface? Discussing the controversy around Saldana’s casting, Latinx Studies scholar Isabel Molina-Guzmán wrote for the journal Flow in 2013: “Ironically, the same notions of racial authenticity that inform calls for the recasting of Nina Simone also constrain casting directors from hiring ethnic and racial minorities to play roles designated for white characters.” I do worry that dark-skinned Black actors will be typecast into the roles set for them by Hollywood due to these notions of racial authenticity. Far too many gifted actors are still left to play civil rights figures or slaves, an antiquated filmic representation of Blackness that moviegoers can’t get enough of, judging by the success of Twelve Years A Slave and The Butler. Nonetheless, a proudly dark-colored icon like Simone deserves an actress who looks like her without painting on an artificial shade of Black. I can think of several who have the chops.

KELTON ELLIS B’18 is a blue alien warrior.