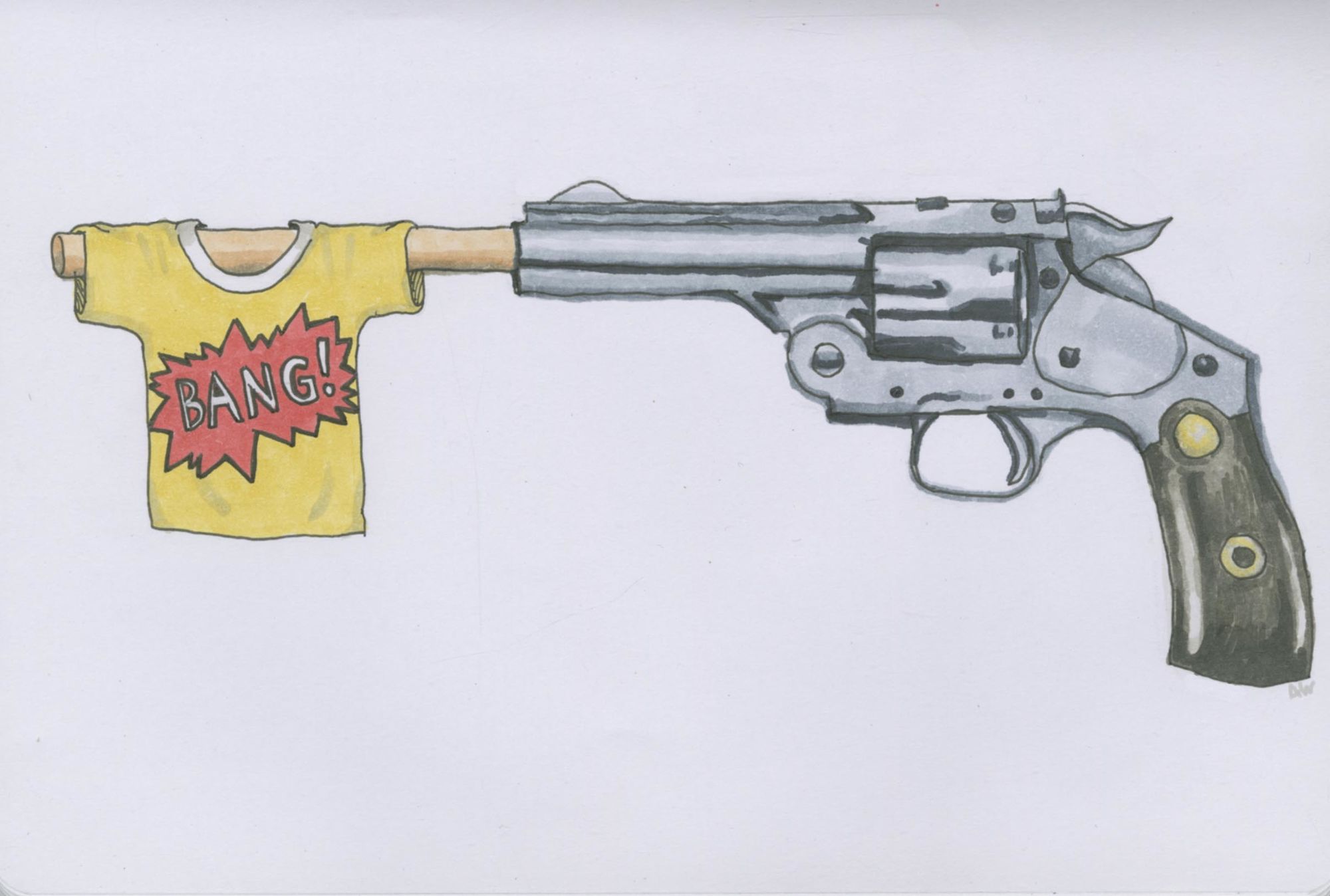 Walk into any Goodwill and you can find an anthology of cotton t-shirts that span a certain American experience. There’s Megan’s baby shower: It’s a Girl!; Utica Race for The Cure in Honor of Nanny: Forever in Our Hearts; Kappa Kappa Gamma LSU Game Day Grill ’Em Banquet for Underprivileged Kids 2012; Palm Spring Rotary Club BBQ & Brews Charity Event; Museum of Modern Art Presents Frida: The Love and Life Exhibition; and so on. My mother has accumulated the most t-shirts in our family; she’s a marathon runner with a portion of her closet devoted to the many fun runs, trail runs, and charity runs that she’s taken part in. The evolution of the free t-shirt has taken on a personal meaning for her as a competitive runner; once markers of her performance, they’ve come to threaten her accomplishments and cardio integrity. “Before, the t-shirt was the prize for winning. Now you get one if you show up.”

I didn’t think about the spectacle of free t-shirt consumption until my brother and I went to Monster Nation: Destruction Zone, a touring monster truck rally, over winter break. Right before the finale, the lights dimmed and the crowd fell silent. “This is How We Do It” began to blare from the speakers and soon the MC for the night, Ross Z. Bonar, a small man in a lime green striped shirt with spiky hair, came out from onto the stadium floor. “Ladies and gentlemen, we have loved every second of having you out here tonight.” The crowd began to cheer until Ross Z. Bonar lifted up his hand and continued: “Now there’s just one more thing to do before we get to the finale. Before you leave tonight you will have the chance to get something signed by your favorite participants. So we thought a few lucky folks would like to have one of our t-shirts that are available for sale outside of section A...for free.” Just as he finished his sentence five or six men ran out into the stadium towards different sections of the audience wielding t-shirt guns behind their backs. By the time Ross Z. Bonar had finished saying the word “t-shirt,” the audience, in a kind of Pavlovian response, had begun to surge towards the bottom of the stadium. By the time the men had spread out on the stadium floor at their designated sections we had transformed into a mob begging to be shot. Soon the stadium was filled with the swoosh...thunk sound of t-shirts shot from canisters propelled by C02 tanks.

Debuted in the early 90s by NFL mascots, the t-shirt gun has since evolved into a cultural phenomenon. Now we have an industry that specializes in militarized t-shirt propellants. We’ve departed from the tranquil, Oprah-inspired era of finding free items placed under our seats, and arrived at semi-automatic weapons that spray t-shirts into audiences. The t-shirt gun is an American invention born in the golden era of TV infomercials and Billy Mays-style advertising. It has continued into another era, one in which high-intensity television salesmen and ads are not enough to capture the ever-elusive American attention span. We need military-grade t-shirt launchers. The Missourian, a newspaper in Columbia, Missouri, published an article titled: “Missouri’s new T-shirt cannon: 24 shirts in 5 seconds.” In the article, Missouri University’s athletic director David Grinch has refocused his efforts on the t-shirt gun. It continues, “‘The focus has to be about how can we better entertain,’ Grinch said. ‘The way we consume our entertainment now, we don’t take a lot of breaks. And neither does the gun.”

Google “t-shirt gun,” and hundreds of websites offer an array of different guns and styles. For instance, tshirtgun.com claims to be the original t-shirt launcher, offering t-shirt guns like the Bleacher Reacher Mega starting at $1999, or the T-Shirt Gatling Gun, self loading and capable of shooting 8 t-shirts per second, starting at $4000. The website states that every barrel is made out of Lexan, a material used on space shuttles: “By using a clear LEXAN barrel you never have to second guess what is about to be launched into your audience.” These are guns that could endure space expeditions to Mars and still reach nosebleed seats. They also offer the Bud Light sponsored ABV: an “apparel bombardment vehicle”, price upon request, which in a Purge-like scenario could easily take to the streets as a fully equipped military vehicle. Aircannons.com also offers custom designs so you can “Build Your Brand with a Customized Air Cannon”. With this they note: “For the Professional Bull Riders Association, we built a tank with a turret that swivels 360 degrees.”

It isn’t the military t-shirt launching paraphernalia but rather the performance they produce that is necessary for Hanes cotton t-shirts to be worthy of falling over stadium seating. This scenario is fully articulated on aircannons.com before you enter their website:

“The mascot loads our Air Cannon with a t-shirt, pulls the trigger and ‘boom!’ The t-shirt soars into the audience. The fans erupt into a mad scramble to grab it out of the air.

But that’s only the beginning. Again and again t-shirts fly into the crowd. The fans are going crazy. Sure, the fans come for the game. But they also expect more. They want to be entertained.”

The language that surrounds t-shirt launching advertisements holds disturbing implications. The threat of violence within the free t-shirt spectacle is apparent; it provokes a feeding frenzy in which pink-faced, middle-age white men in cargo pants knock over Miller Lites, nacho chili cheese, and small seven year old girls in the row in front of them for a Dick’s Sporting Goods t-shirt. It creates an experience that can be simulcasted on Jumbotrons and converted into viral youtube videos. We don’t want to be handed a Wendy’s t-shirt at the end of the show. There’s not a sentimental value attached to the t-shirt that makes us want to own it. Catching a Wendy’s t-shirt shot from a semi-automatic gun in a crowd of two thousand people makes us want the t-shirt. We have a story for the ride home; a tangible object that gives us small talk and reminds us of both the event and our physical prowess.

The free t-shirt also speaks to a peculiarly American logic. To my knowledge, everyone at Monster Nation was fully clothed. And yet, a crowd of over two thousand people was willing to put their hands in the air and perform for a free t-shirt emblazoned with Subway logos. This in itself raises questions surrounding the price of the t-shirt and the extent to which we’re willing to be exploited for it. We don’t really want Subway t-shirts. But we want to engage in the spectacle of getting one. Aircannons.com and Tshirtguns.com have discovered that people don’t want to just show up anymore. This is the power of the free t-shirt complex. These are halftime shows enhanced with military grade, semi-automatic machines wielded by dancing mascots. We do expect more. We need to be a part of it and we want something out of it. It has become instilled into the rituals of American entertainment. We show up to things we don’t care about for t-shirts that we don’t really need. Regardless, we had no choice in the matter as it was being propelled through the air by a gun specifically designed for t-shirts. There’s no option to not want it.