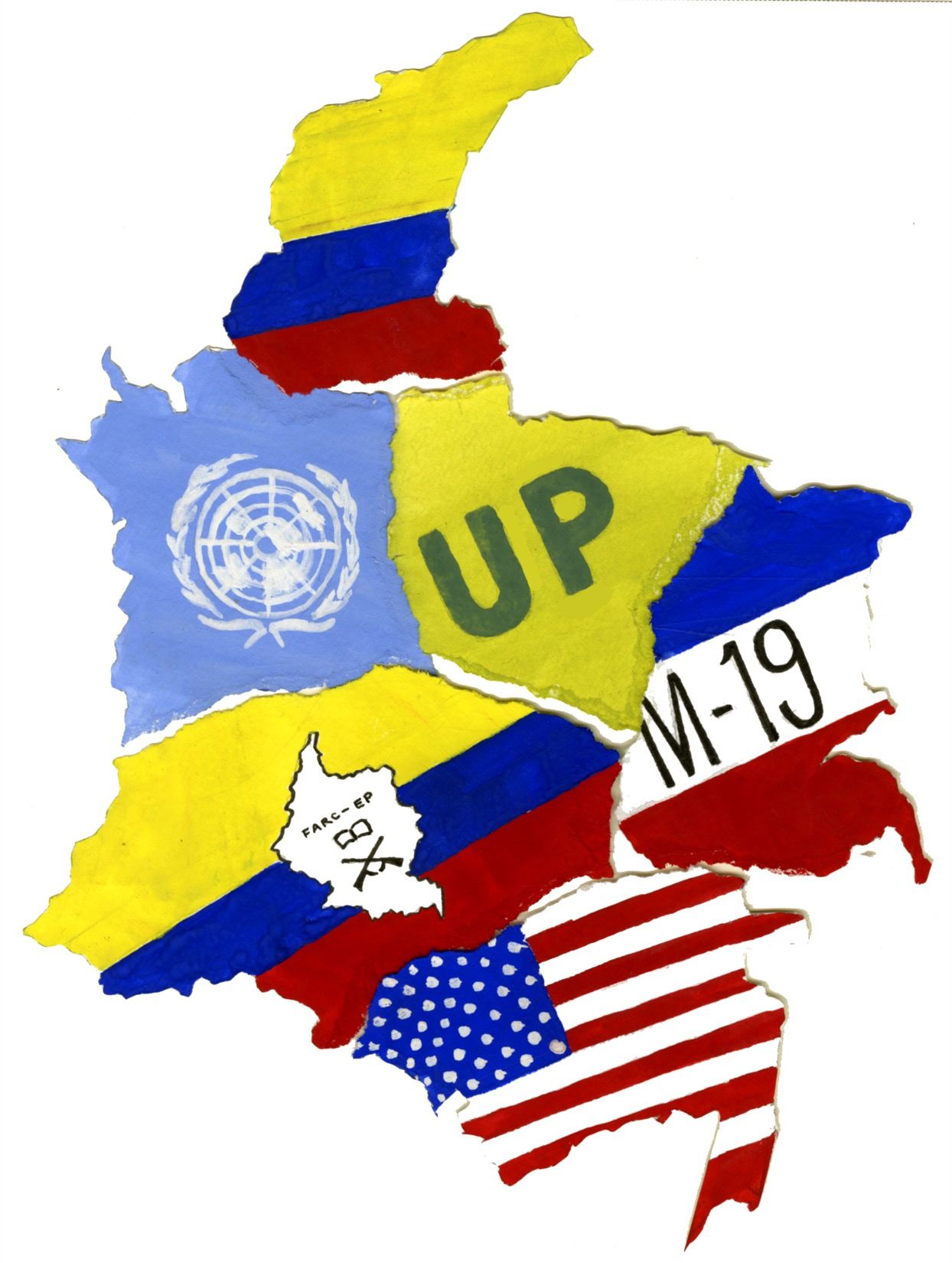 Last week, Colombia and the United States celebrated the fifteen year anniversary of Plan Colombia. This program, often heralded as the centerpiece of the War on Drugs, has provided the South American nation with billions in military aid over the past decade in order to combat narco-terrorist insurgencies that were threatening to overrun the country.

In a press conference at the White House, Presidents Obama and Juan Manuel Santos, his Colombian counterpart, announced to the world that a new era in Colombian history was fast approaching. Gone were the days of Pablo Escobar, of the very real possibility of becoming a failed state, and soon, of the 60 year-long civil war between guerrillas, paramilitaries and government forces. However, while these messages painted an optimistic picture, on the ground in Colombia such things are easier said than done.

For the last sixty years, Colombia has been home to the longest-running conflict in the Western Hemisphere. The civil war has wreaked havoc across rural and urban areas alike, contributing to a population of six million internally displaced people—the second highest rate in the world after Syria. In 2012, in an effort to de-escalate this conflict, the government began peace negotiations with the largest guerrilla group in the country: the Revolutionary Armed Forces of Colombia (known by their Spanish acronym, FARC).

The government has established March 23 as the deadline for all components of the peace agreement to be signed in Havana; the FARC has stated that this process might take longer, given delays in securing a transitional justice program. This would allow the establishment of a Truth Commission, the full demobilization of combatants, and their eventual reintegration into society. On December 15, the government delegation signed a landmark agreement, providing reparations to victims. This is one of the thorniest components in any post-conflict agreement: deciding who the victims are, and what they receive, is often a matter of contention. Over the past three years, both sides have agreed on issues regarding agricultural reform, political participation, and the eradication of illicit crops and drugs.

The origins of the conflict are complicated but can be traced to unequal land tenure, poverty, political violence, and extreme inequality. As with many other countries across the region, Colombia witnessed the emergence of Marxist guerrillas in the mid-20th century. At first ideologically motivated, these guerrillas challenged the unjust political and economic state of the country and received support from the public. But by the 1980s, their quest for power led them to unleash unparalleled levels of violence against the population: massacres, disappearances, and attacks against critical infrastructure for the provision of public services. At the same time, with the rise of drug cartels in the region, the FARC turned to drug trafficking—along with kidnapping and extortion—to finance their military activities. To make matters worse, a group of wealthy landowners took the situation into their own hands, forming paramilitary groups in order to protect themselves and their landfrom the increasing threat of guerrillas. The combination of these factors turned Colombia’s war into an increasingly complex and deadly three-way conflict, with civilians caught in the crossfire.

Ghosts from the Past

While the forthcoming agreements, looking to end the low-intensity yet long-lasting war with the country’s largest insurgent group, could indeed open a new chapter in the nation’s history, the peace negotiations are not without precedent. Colombia has been plagued by violence since before the start of the current civil war. Animosity within the nation stems from rifts that appeared as soon as the country gained its independence from Spain in 1819, with persistent acts of violence on the part of all armed sectors throughout the following 200 years. If there is one constant fixture of Colombian daily life, it is perhaps the omnipresence of violence.

This is not the first time in Colombian history that the government seeks to end war through negotiations. In 1985, President Belisario Betancur held peace negotiations with the FARC. During his administration, a small number of guerrilla groups demobilized and formed their own political party, the Unión Patriótica. Though the government backed these efforts, members of the party were systematically murdered by paramilitaries and right-wing actors throughout the late 1980s and early 1990s. A total of 5,000 militants died, including two presidential candidates, eight congressmen, 13 deputies, 70 councillors, and 11 mayors. Violence against ex-combatants discouraged other guerrilla factions from even considering peace as a real option, when reintegration into the country’s political life proved so dangerous.

In the early 1990s, President Virgilio Barco’s government signed peace agreements with a number of smaller guerrilla groups, including the Movimiento 19 de Abril (M19). The M19 had distinguished itself from other guerillas for its ideological struggle against poverty in the country, as well as for their brazen acts of urban terrorism (including laying siege to the Supreme Court building in 1985). Immediately after their demobilization, they created the Alianza Democrática M19 (AD-M19), a new political party that successfully won a number of seats in the Constituent Assembly of 1990. The M19 became a symbol of hope for many that a peaceful alternative to the armed conflict was possible. However, many of the new party’s leaders also faced political persecution and constant threats, which, when coupled with internal discord and an inability to organize, eventually caused the AD-M19 to collapse.

Today, the anniversary of Plan Colombia comes with an inevitable clash of opinions. Officially approved under the Clinton administration, the plan was supported by Democrats and Republicans alike. The program forged close ties between the two countries, which became apparent during the ‘pink tide’ of newly elected left-wing governments that swept through Latin America in the 2000s. Colombia was one of very few countries in the region that did not elect any left-wing, anti-US politicians. Choosing not to jeopardize bilateral ties, Colombia elected center-right politicians and secured a massive amount of aid through Plan Colombia. This allowed the government to revamp its security and militarization efforts.

Over the past decade, the plan has seen its fair share of proponents and detractors. On one hand, supporters claim it allowed the Colombian army to debilitate the FARC, driving them into a stalemate in which negotiating with the government became an attractive option. Thanks to Plan Colombia, the FARC are no longer in a position to carry out the large-scale attacks they were known for in the 80s and 90s. According to Antonio Caballero—a journalist for the Colombian newspaper Semana—the FARC have become more realistic in their approach: they no longer fight for a revolution, but instead ask for a number of reforms. Those in favor of the plan also point to the strengthening of the Colombian state through the consolidation of power and territory as one of its main successes. Opponents of Plan Colombia, including the Washington Office on Latin America, argue that it facilitated massive human rights violations on the part of government forces, prolonged the armed conflict, and failed to eradicate drug production. Among the human rights violations during this period, the oft-cited “false-positives” scandal stands out. Military units, incentivized by monetary rewards that came from Plan Colombia funds, were responsible for the murders of thousands of civilians, passing their corpses off as combat deaths in order to overreport their “success.” It is possible that roughly one third of the reported deaths were in fact “false-positives.” These crimes stained the legacy of former President Alvaro Uribe, a polarizing public figure who enacted a hardline approach to security, sometimes at the expense of human rights.

The post-conflict scenario that lies ahead will need substantial financial support to succeed. The UN has already agreed to deploy its peacekeeping forces and monitor a ceasefire. A number of developed countries have promised aid to support future reforms. However, this new plan will need to redefine success, peace, and security in the country. Since 2000, over 70% of U.S. foreign aid to the country has gone to Colombia’s security forces. With the changing times, it is imperative to allocate funds in support of transitional justice programs that ensure the successful reintegration of ex-combatants and the restitution of land to displaced victims.

It is essential that Colombians leverage this unique opportunity for peace. For the first time, the FARC finds itself significantly debilitated, forcing them to consider peace negotiations seriously. Paramilitary troops have also been in the process of demobilization through legislation enacted in 2006, allowing for a de-escalation of the armed conflict on all fronts. In the last decade, Colombia experienced economic growth and an increase in foreign direct investment, even as its regional neighbors were experiencing economic downturns due to the end of the recent commodities boom. The Santos administration has sought to improve the country’s international reputation, aiming to position the nation as an emerging force in the region instead of a pariah state. If the immense of funds that were previously spent on the military were instead channeled to the provision of basic services for the majority of the population (Colombia is infamous for the lack of state presence in some regions), the peace dividends that the nation would see could be transformative. The country has never had such a strong incentive to end conflict as it does now, and while transitioning from the wartime mentality that has been the norm for the past half-century will not be easy, it is well worth the effort.

A Nation Deciding its Future

Violence is constantly normalized in the lives of Colombians: in the news, the dinner table, and even telenovelas. It seems at times that being Colombian and living in a state of violence, even if experiencing it from afar, are inextricable. One in six Colombians—nearly 8 million people—have registered with the government as conflict victims over the course of the war.

Despite the normalization of violence, 60 percent of Colombians support the peace process, according to a Gallup poll conducted last November. Considering that the FARC are vilified by large swaths of the population (many of whom would prefer to see the FARC punished instead of re-integrated into society), this approval rating is not to be underestimated. President Santos has made it clear that once the agreements are signed in Cuba, they will be subject to a plebiscite—a democratic mechanism that allows voters to decide on an issue of national importance—in which Colombians will choose if they want to ratify the much contested peace deal. The plebiscite marks an important symbolic step for the people of Colombia, who after having been denied agency for more than a half century, now have the future of the country in their hands. After being victimized and controlled for sixty years, it will be the people themselves who get to decide their future.

The peace process will not satisfy all. The FARC are but one of several armed groups currently operating in the country—and larger structural problems of inequality, state neglect, and citizen security will remain long after the last weapons are laid down. However, the peace accord does what for so long was thought to be impossible: it gives Colombians an opportunity to imagine that a different country is possible and that peace is within sight.

MARIA CAMILA BUSTOS B’16 and NICOLAS MONTANO B’17 are sick of growing up in violence; they just want to eat their arepas in peace.