On Foundations and Boundaries


A mythic aura hangs about RISD Foundations year like a thin layer of spray fixative in an art student’s lungs. When we speak of Foundations, we speak of the erosion of boundaries: the border between yesterday and today, as two days are breached by a period of manic productivity and then between man and machine, as the next morning one’s body becomes a glue-encrusted automaton, staggering all but brain-dead into studio under the weight of your geodoesic pizza-slice-printed monument to lost childhood. But beyond the mental and physical degradation, Foundations year has a beauty and worth all its own, and great merits absent from the standard liberal arts education. It is not necessarily that Foundations facilitates the creation of art—in fact, in such a climate of overwork and overstimulation, art (like sleep) is evasive in character. It’s instead that Foundations year creates openings for dramatic irony, for beautiful lived-in paradox that almost always contradicts the “official” lesson at hand. Here are three examples of how our exhausted yet ego-inflated states, coupled with loose and unpredictable class structures and teachers’ cult-of-personality, made Foundations a breeding ground for postmodern absurdity. It is impossible to say where the projects and narratives begin or end. They are the instances in which the true logic of our work could peek out from under so many layers of contrivance. The revealing was not through the art-object itself but through how it was created and received; the story surrounding it. 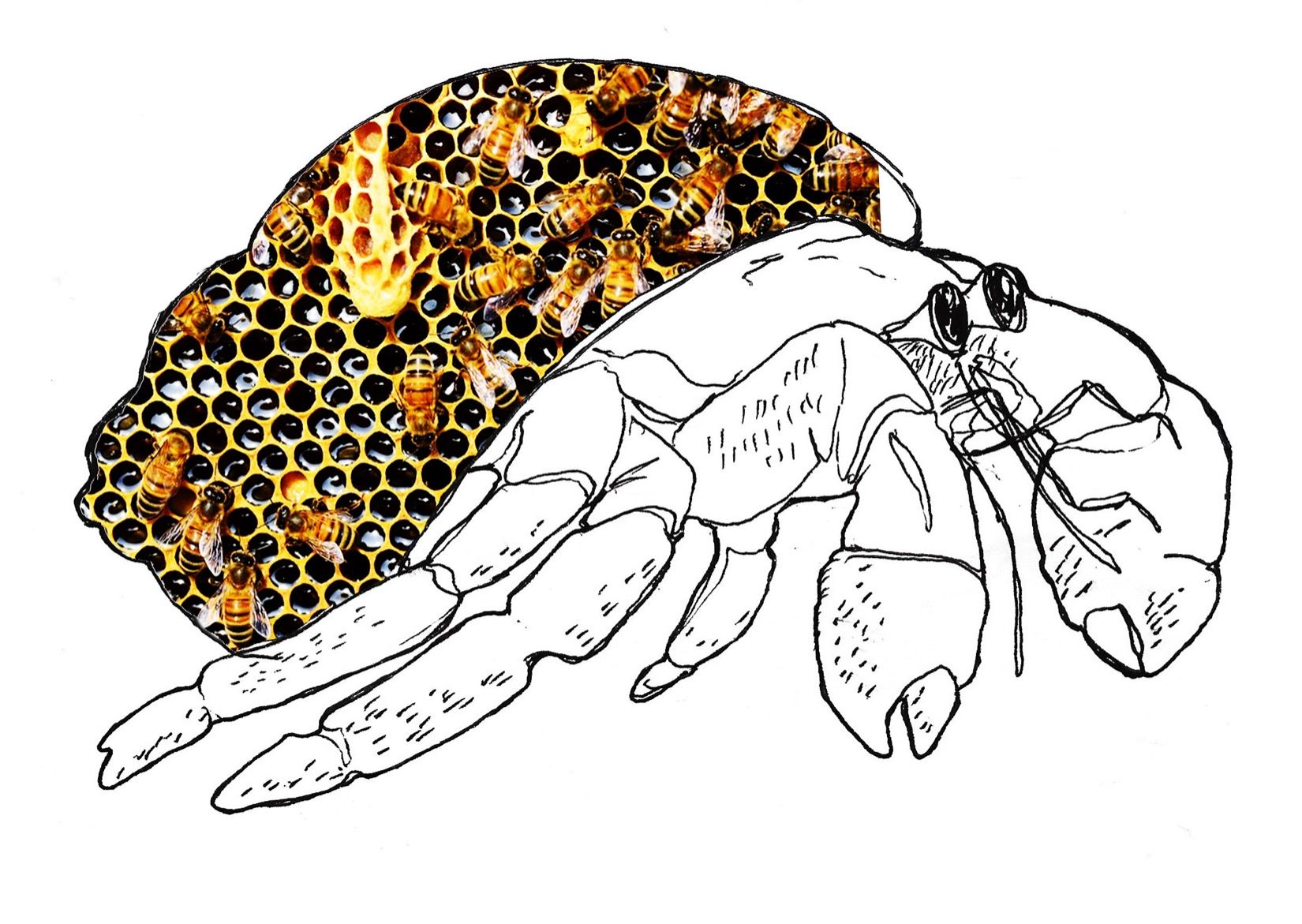 This one could be straight out of a Borges short story: A brilliant and devoted international student set out to make a series about drawing itself for our Drawing final. He began by generating page after page of dense horror vacui compositions, emphasizing his artistic dynamism, his utter dominance over the entire piece of newsprint with bold, expressionistic sweeps of charcoal. The next week the pieces became more figurative, though never illustrative, the gestural lines swarming in around figures drawing at their easels. The next week, at our teacher’s insistence, space became his main concern and the focus shifted to our desolate, empty studios themselves. Bigger, bigger, she demanded every week. The drawings expanded until they encompassed the entire studio wall itself, with all the contents of the room recorded exactly to scale. In his rigorous enquiry into the essence of drawing itself he had somehow moved from abstraction to trompe l’oeil mural—the opposite vector of what we generally accept as art historical progression. But for all the rhetoric of drawing as a “window into deep space,” or an exercise in impassioned mark-making, in truth these drawings functioned as mere time cards. Our teacher wanted density as evidence of devotion, a palimpsest of false starts to testify to the many obsessive hours we’d committed to her homework. In the boy’s drawings the columns of the empty studio were emphasized by a series of vertical marks which I thought echoed tallies on a prison wall. The size of the drawing didn’t necessarily make it more accurate, only more encapsulating. The drawing would have been impossible to execute in any other context, as it was inexorably tacked to its arena of production. So if the assignment had begun with drawing-as-self-expression (expressionism), it had ended with drawing-as-labor, the individual both literally and metaphorically obliterated and their labor-hours the only thing left hanging.  (That being said, the boy loved to work and we loved his drawings. Perhaps my interpretation was just sour grapes, as the studio Stockholm syndrome had not rubbed off on me and my impoverished doodles.) 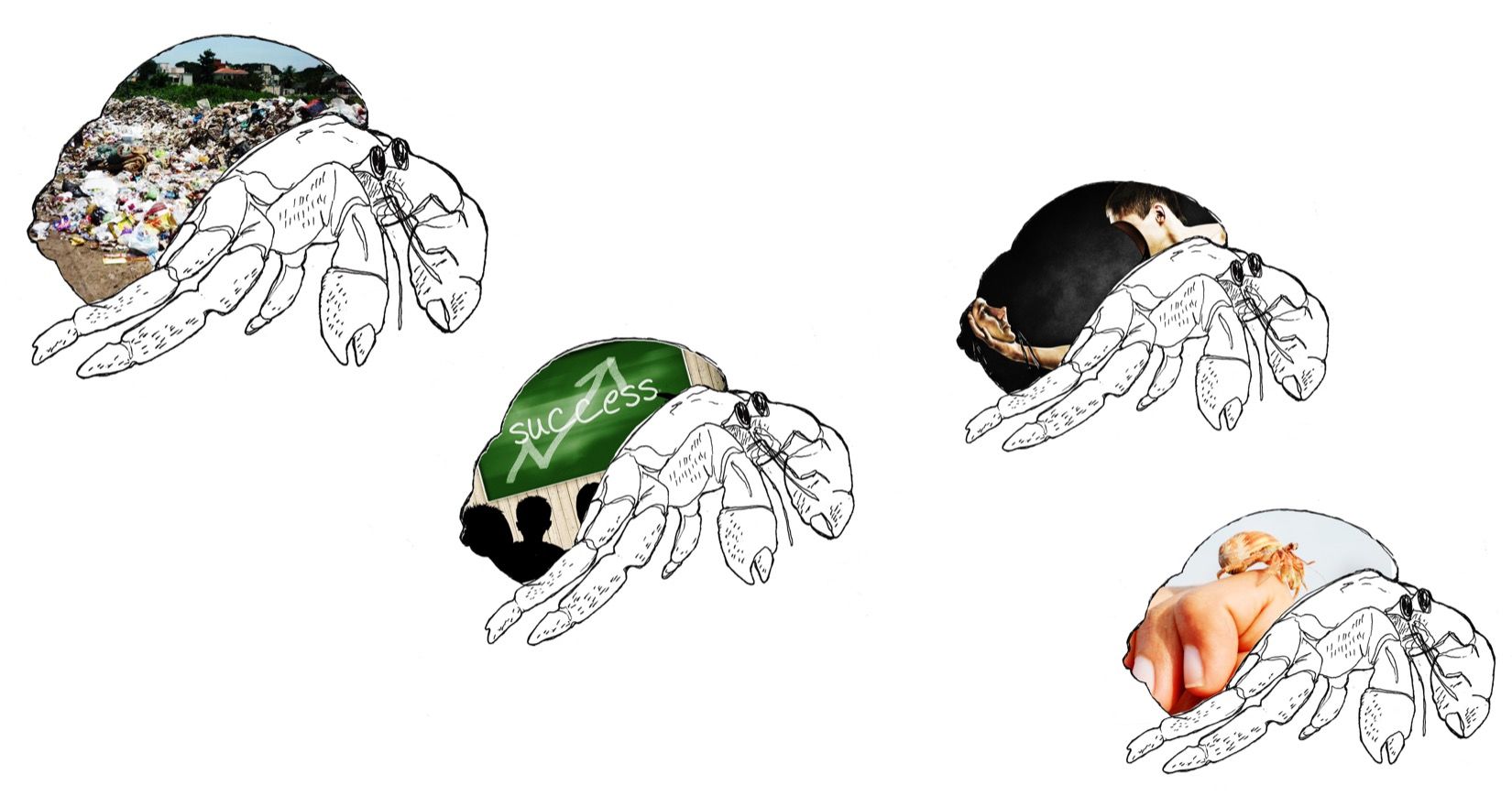 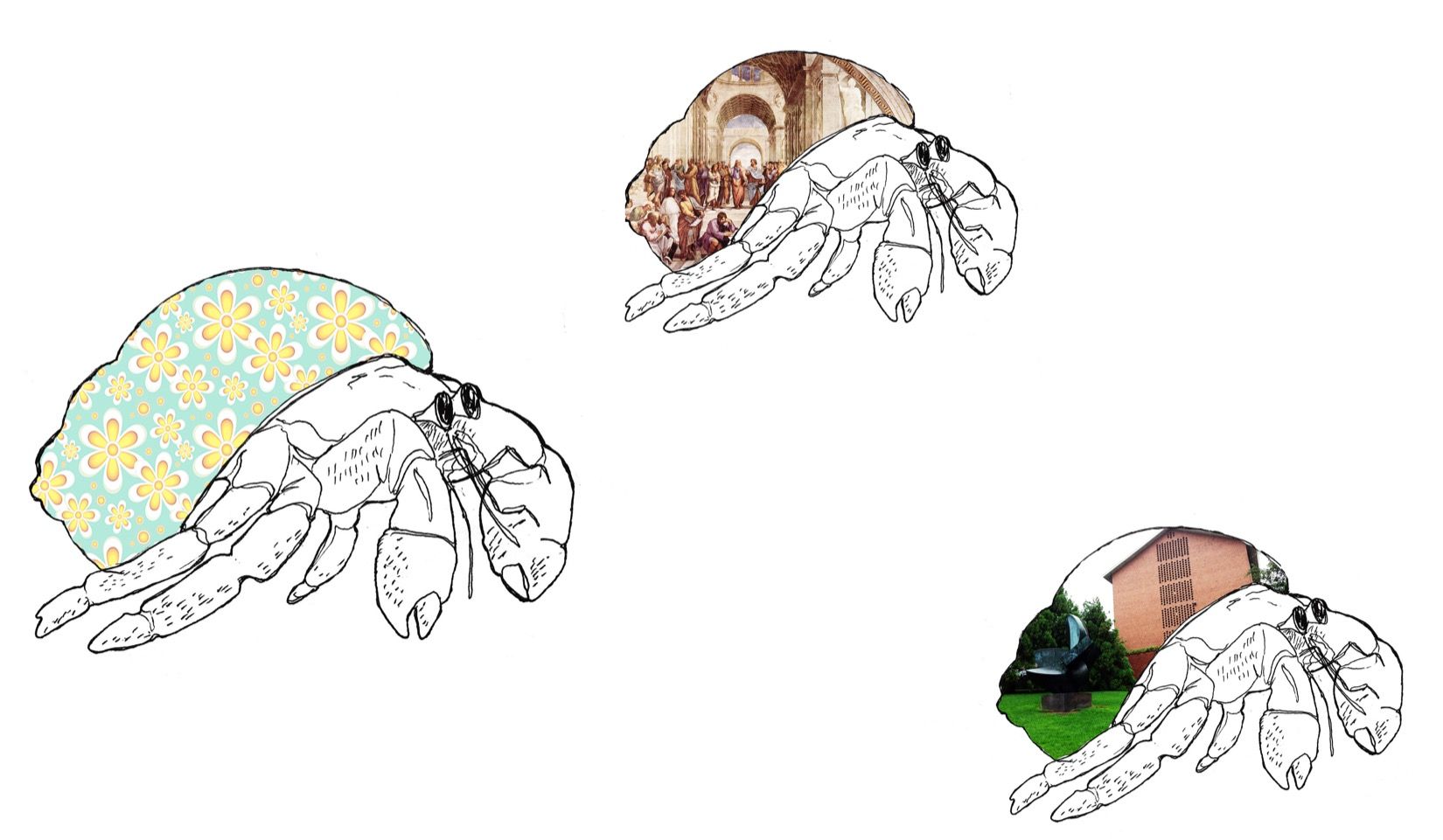 In Spatial Dynamics our assignment was to use a live animal in our final. I was paired with my good friend, who is an awesome artist, designer and thinker, but my creative opposite in almost every way. We were supposed to base our world for these animals off of short stories we’d written. Mine was about RISD, written entirely in acronyms like Retina Is So Delicate; Reach Into Soundless Depths; Revolution, If So Desired; Rotting Is Slow Dreaming. His was about impatience. When we first started to discuss the project, we instead became interested in the logical problem that everything is different, but that everything has the same opposite, “nothing,”—that the opposite of “broccoli” can’t be “not-broccoli” because “not-broccoli” is an empty mold container for the idea of broccoli. From this point we became interested in the idea that dichotomies aren’t opposites but always a pair like form and content, a shell and its contents. A hermit crab seemed the perfect cheeky allusion to this line of ontological inquiry. I wanted to use photos or patterns that alluded to terrorism, to highlight the bioethical dilemma of animals as art objects (What’s next, people as art objects? Oh wait, Vanessa Beecroft...) This idea was quickly nixed and we got into a fight about my love of surface application (photo-textures, stickers, buttons) versus my partner’s love of material properties (working with the natural grain of wood, for example,) which for me, felt like a very gendered debate. Our compromise was to make the piece about hermit crabs as nature’s consumerists, allowing them to choose between different 3-D printed shells shaped like the Platonic solids—Cube, Tetrahedron, Octahedron, etc. We brought the crabs back from Petco, swaddled in sweatshirts, and set to work on fabricating their food bowls—naturally, in the shape of 3-D letters spelling out “HIGH DEMAND.” But unfortunately, the shipment for the printing filament was delayed (demand but no supply!) and the night before crit we found ourselves sans tank decoration, with the crabs still cozy in their original flamingo-and-tulip painted shells. (We realized later that our new shells might have had their interior spirals going in the wrong direction). For a five week project, the tank was a travesty, and we launched into a last minute plot to bring forth the poetics of our own failure. We briefly considered being naked (without our “shells”) or even having sex in front of the class, for whatever shock value might distract from the tacky hermit crabs, but my partner was worried about shrinkage in the chilly, creature-packed studio. We ended up decorating the tank with 3-D printing pen and tulip paintings, while I read a last-minute critical essay in a robot voice over generic reggae music. Our argument was that, while the project looked rushed, it actually took millions of years for the hermit crabs to evolve, for the oil that makes up the printing plastic to be compressed. We argued that nature could achieve a balance between form and content that human art could emulate but never fully realize, hence the futility of our own efforts here. We claimed that capitalism imposed a fantastical element alienating form from content (commodity fetishism) that at-home 3-D printing might be able to combat, by rendering the production process visible, and the object banal. At the same time, the more could be done at home, the more we could retract permanently into our “shells.” (None of these points I would defend, then or now.) When we were done presenting the crickets from a neighboring project underscored the silence. The only feedback was that our essay had been too long, and that if we wanted to actually make a statement, the hermit crabs would have had to design the Rhino files and operate the 3-D printer themselves.

Though these stories are absurd, I don’t intend to undermine or make fun of RISD in any way. I still have much to learn from these strange episodes (among many others I have yet to document.)  It’s to RISD’s credit that an art studio can operate on so many levels at once. My problem with college-level liberal arts or lecture-style classes is that there is no room for paradox to unfold. The curriculums are rigid and formulaic; while you can learn in the class, the class itself can’t come unhinged and operate as a larger metaphor. In art school, on the other hand, the boundaries of what is considered our work can be flexible enough that our projects may (intentionally, or unintentionally) function as a critique of our own conditions of labor. Based on an artist’s claims of meaning and our class’s and teacher’s judgments, what counts as our work can extend to include its process, its mode of display, its reception and/or its failure. There is little potential to produce such challenging meta-commentary in a traditional liberal arts class, no venue for public critique of the class structure itself. These environments are designed to be polite and safe, but there’s something to be said for the drama and unpredictability of art school. Foundations assignments often seemed akin to social experiments or even reality TV. The contrived but also deeply personal nature of the prompts produced self-consciousness but a modicum of self awareness. The push for individualistic expulsivity (projects exploring one’s past, one’s body) was tempered by widespread conformism and easy retreat into the crit hivemind, producing narrative outcomes that bewildered and amazed me. We faced the difficulty of finding own voices while navigating a labyrinth of contradictory creative dogmas, espoused by professors who were caught in mazes of their own. The concept of art was exploded and abstracted from every angle until it became nothing but particulates in the air. But my resounding conclusion is this: if our entire system of education and work is a series of nesting performances, we might as well make those performances big, bold, and memorable. For Foundations year doesn’t present meaning as something concrete, like its name might imply, but as something lively and amorphous— growing, shifting, hemorrhaging, regrouping, beaded with blood, sweat, and gouache.